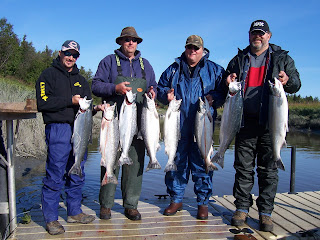 The silver salmon fishing continues to be red hot. Pictured are Danny, Bill, Lyle, and Rick with a limit of silvers. As you can see in the background there's not a cloud in the sky. Usually that's not good for silver fishing but luckily we caught all these fish before the sun could get very high in the sky. Every day this week the bite has been different. Some days eggs, some days plugs, but today was a mixture of both. Have a great Labor Day weekend and whoo-haaa for Governor Sara Palin being nominated as McCain's running mate. The buzz on the river yesterday had nothing to do with where the fish were biting but that fact that our Governor has been thrust into the national spotlight. She's a sharp, common sense lady that isn't afraid of ethics reform and taking on the big oil companies. No wonder she has over an 80% approval rating by her Alaskan constituents.....As a comparison, Congress and the President are in the low teens.

A Gorgeous Evening on the Kenai 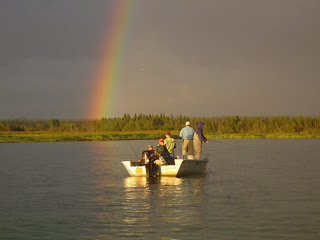 Here's a picture of Gary Blinn and the Moore group fishing on a Sunday evening in the Beaver Creek Hole. Unfortunately this photo doesn't show everything because we witnessed a full double rainbow that covered the eastern sky. Pinks, silvers, and rainbows....what a great evening. 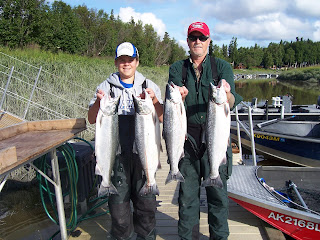 First of all, sorry for not updating our fishing report more often but the last three weeks have been rather busy....a very good busy. Every other year Gary Blinn organizes an Alaskan adventure for his friends and colleagues. In a weeks time they'll fish the Kenai for silvers, fish the ocean for halibut and silvers, fish the middle/upper Kenai for trout, and do a fly in trip to catch more silvers. Overall the fishing on the Kenai has been very good. Plenty of pink salmon and limits of silver salmon (except for one morning when we were completely shut out of silvers but managed to get a few in the evening). What's been nice is the average size of the silvers have been larger than usual. The largest landed in my boat during the three weeks was a whopping 15lbs. Way to go Danny.

The core of Gary's group have been coming for ten years so it's nice for Jane and I to get reacquainted with old friends and to make new ones. There are too many people to list so not to offend anyone I'll just say thanks to all for making it fun for us, especially the Tex/Mex-seafood night dinners.

One last thought, it was great to see Peter Medchill, Ron Rico, and John and Lars Ohlin. We worked in a few fishing trips when I wasn't out with the Blinn group and also managed to see Hobo Jim one night. Thanks to Jane for putting up with 5 snoring men and a dog all cramped into a one bedroom cabin. I owe you one.

I still have a few weeks of fishing left so check back every once in awhile for a report. 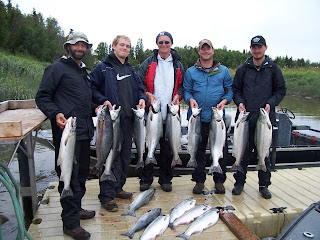 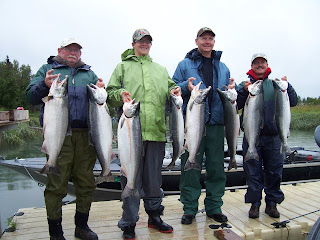 Posted by Beaver Creek Cabins & Guide Service at 11:03 AM 2 comments: 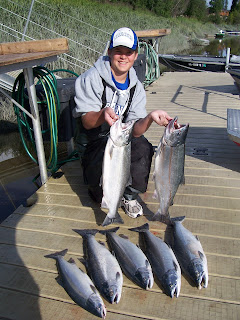 The silver and pink fishing continues to be hot. As you can see in the photos Lars Ohlin has continued his summer hockey workout program by reeling in fish after fish. Lars says it's a lot more fun reeling in fish then shooting a couple of hundred pucks in his driveway. Also pictured with Lars is my son Mac. It was fun having them out fishing and watching their good natured ribbing of each other. Lars will be here with Jane and I until August 18th. It might be hard to get him back on the plane..... 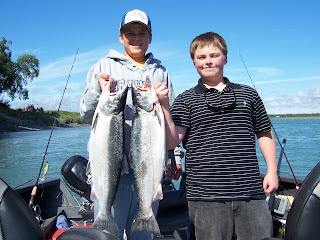 The Silvers are in!!! Wow. Almost too good to be true. Pictured are Lorie, Michelle, JoRay and Gary after a morning of silver fishing. The past several years the silvers will slowly begin to show up in the the first part of August but this year they're already in and in very good numbers. In fact, after my day of guiding was over Jane and a couple of friends of ours went out in the afternoon and caught our limit as well. This is good news for Gary Blinn and his crew this year. Gary comes up every other year and it was about 6 years ago that the fishing started out this strong. What a great way to start out Gary's three week stay.

Team Canada....End of the King Season What a great way to end the king season. Team Canada, consisting of Albert, Jim, and Rob fished the last three days with me. As you can see in the photos the fishing was pretty good and the weather was beautiful. The majority of my customers usually fish a 1/2 day trip. What Albert, Jim, and Rob did is a testimonial to why a full day trip is a better way to go if you're after numbers of fish. Over the course of three days these guys brought 20 kings into the net with quite a few silver and pink salmon as well. They experienced the ebb and flow of a typical day on the Kenai. There were moments when the bite was on and moments when it wasn't. On a 1/2 day trip you never know if the river will be "on" or not and that's a chance you'll have to take. You can work through the cycle on a full day trip. Enough said.

Team Canada was missing one player, Kirk, and it's too bad that he couldn't be here to enjoy the fishing. Jim made sure to remind Kirk what he was missing and whenever a big fish was landed a phone call was made to give him an update. I'm sure it was torture. Anyway, speaking of big fish, Jim took home bragging rights for the biggest fish of the trip and for the season. He released a 49 1/2" x 31" king. That computes to a salmon weighing 64.2 lbs. Once again, the biggest salmon of the year in my boat came on the last day of the season.

Final thoughts on the king season. I'd like to thank Albert, Jim, and Rob for ending the season on such a high note and I'd like to thank everyone else for making it a great, great king year. This king season was for you dad and thanks for always having time to take a kid fishing. I won't ever forget it.

Stay tuned for the silver salmon season. I expect a good year based on the early catch rate so far.