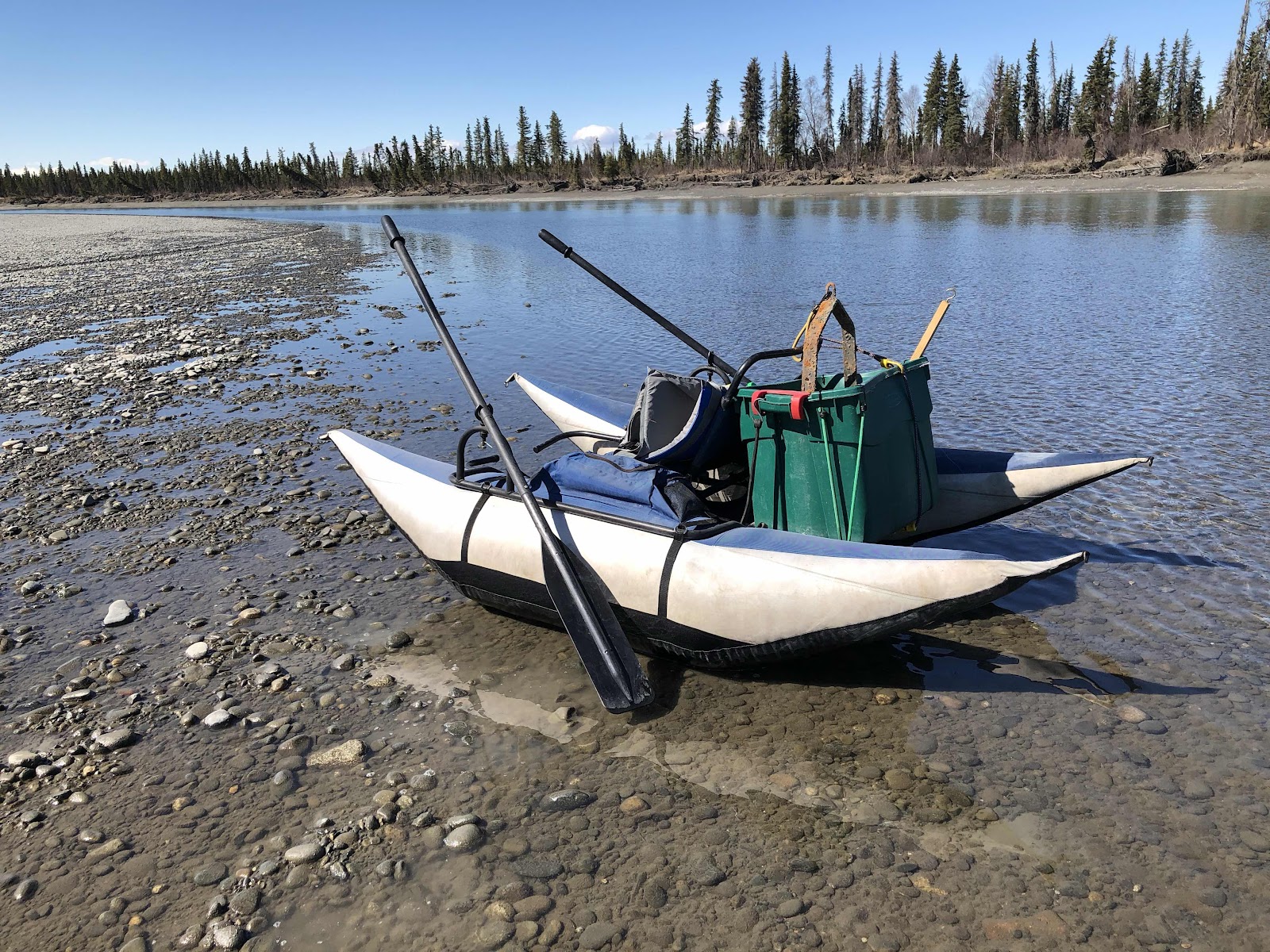 Long time readers know that when the dock goes in, a river float is not far behind. This past week, I found the perfect combination of weather and free time to do it. Getting on the river for the first time of the year is always good for my soul and it's also tremendous exercise. Not only did I row for five hours, my iPhone step calculator said I walked 4.65 miles. That's a decent distance, considering I was dragging a cataraft and wearing chest waders while doing it. 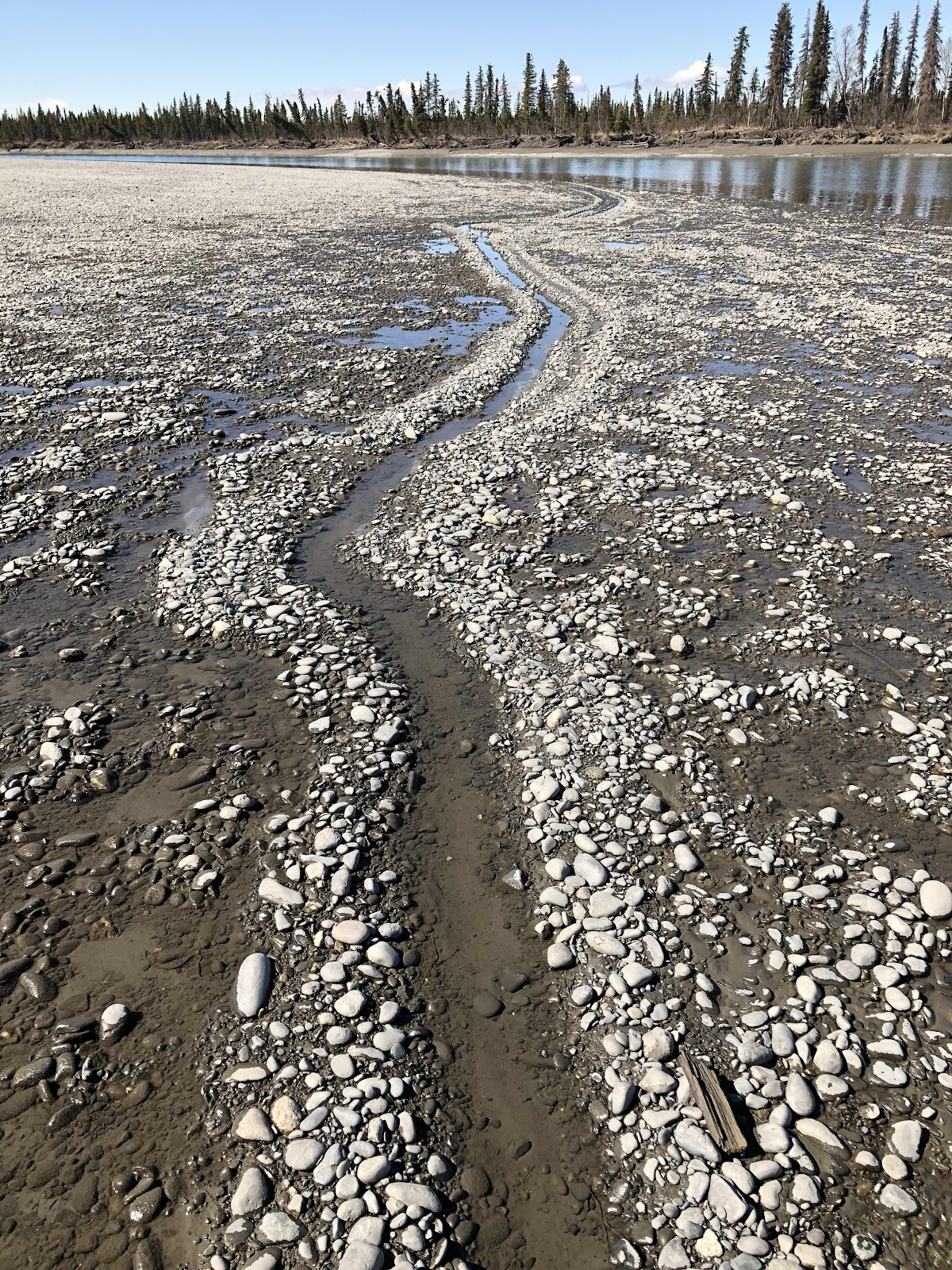 The river is always changing and I never know from year to year what I'll see or find. That's part of the intrigue of it all and why I keep doing it. I suppose you wonder what this photo is about. A river within a river? A game trail from a beaver or otter? Nope. This remnant is what's left behind when a tree has been dragged down the river as the ice breaks up. In a couple of weeks, the river will rise high enough to cover it, and I'll be the only one who knew it was there. 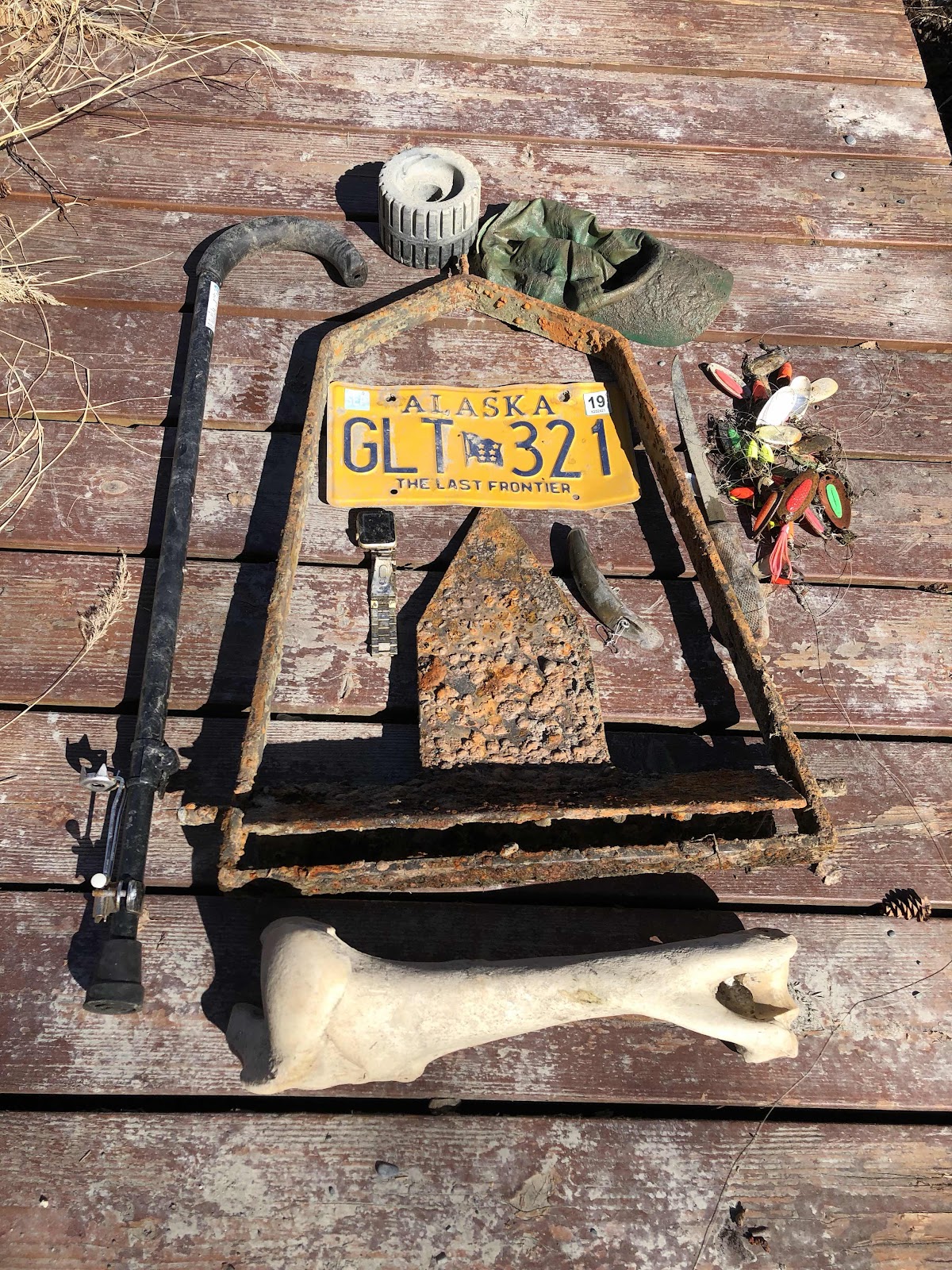 Since Earth Day occurred this week, my river float was not just about me and what lost items I could find, I also picked up trash. However, I did find a few treasures. Well, at least to me they were. A cane, a hat, a watch....hmmm, I hope those aren't clues to a bigger, more tragic story. I also found 20-30 fishing lures, a license plate, a CutCo fillet knife, an anchor (the Holy Grail of river salvaging), and a femur from a bear. The reason I kept the bear femur is it has a nice, heavy feel to it and should make an interesting fish whacker. You can never have too many fish whacker's... 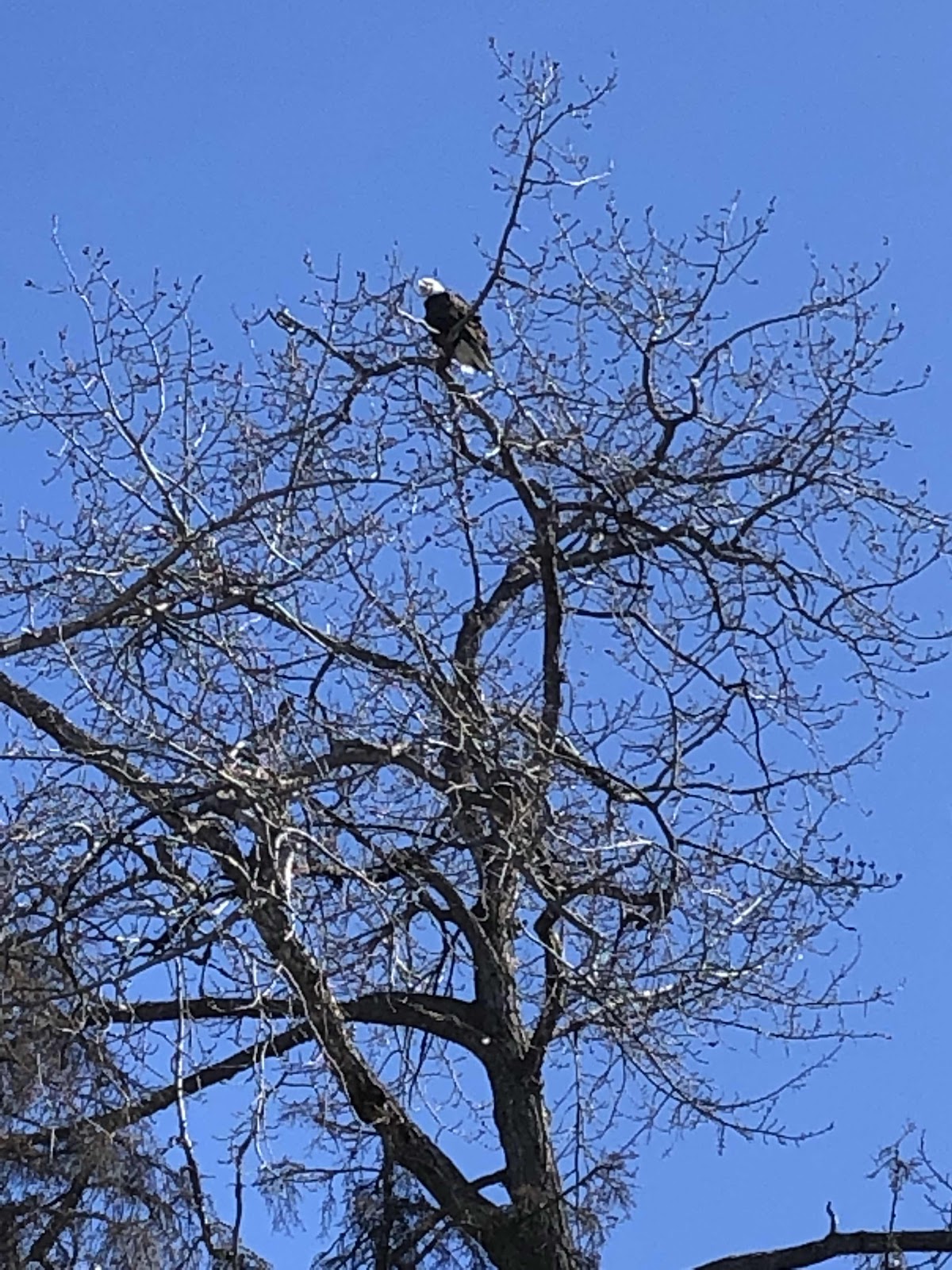 As I stated earlier, a river float is good for my soul, exercise and for finding lost items. Another aspect that keeps me doing this is the wildlife viewing. Moose, caribou, seals, and plenty of birds are observed most years. With this in mind, I’m posting the last two photos for Augie, a 10 year old master phenologist from Shevlin Township. 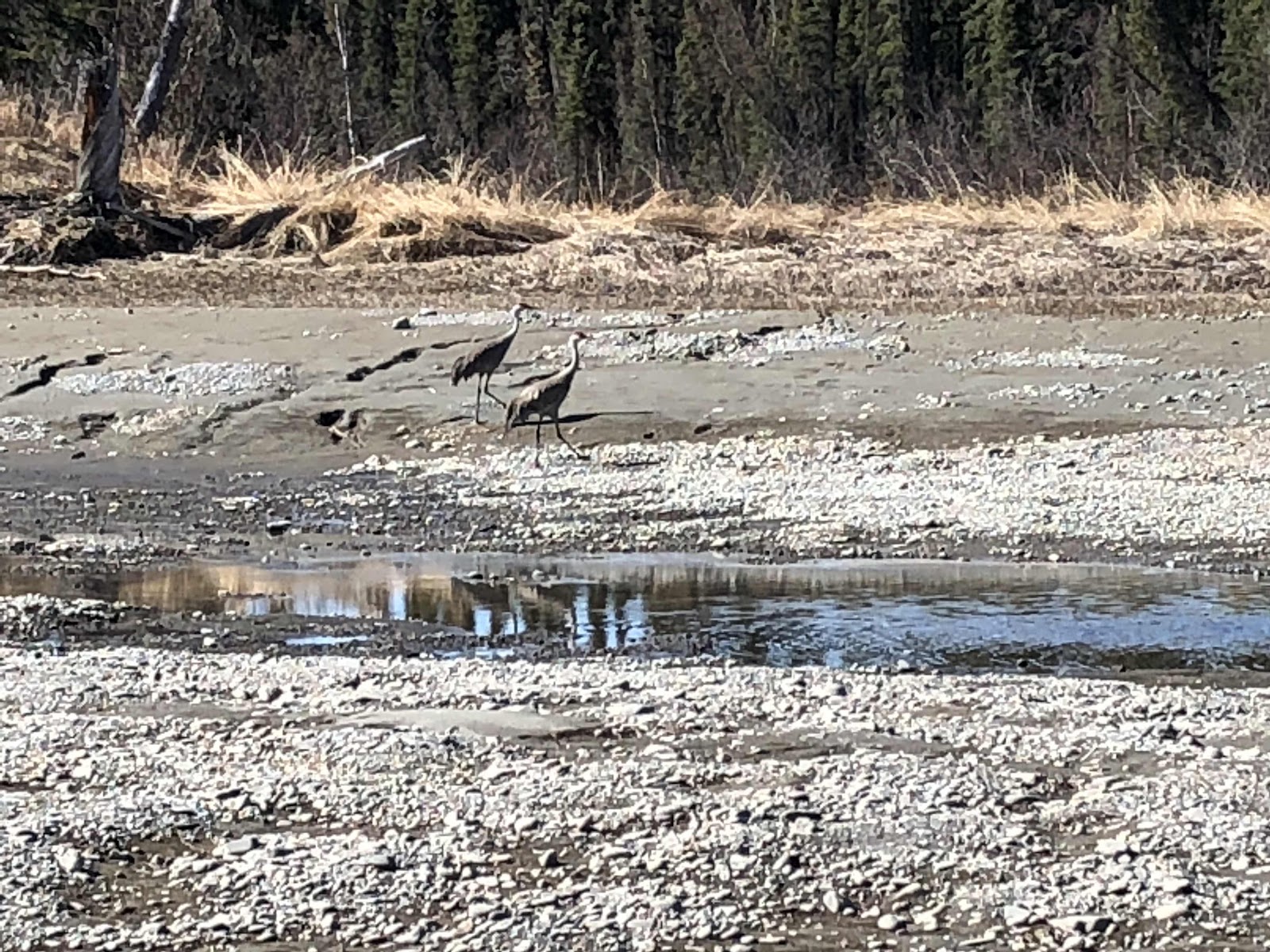 A pair of sandhill cranes foraging for food.

It's hard not to get philosophical when you spend the day on the river all alone. I’ll end this post with this quote.

The sun shines not on us, but in us.
The rivers flow not past, but through us...
-John Muir

Posted by Beaver Creek Cabins & Guide Service at 10:28 AM 1 comment: 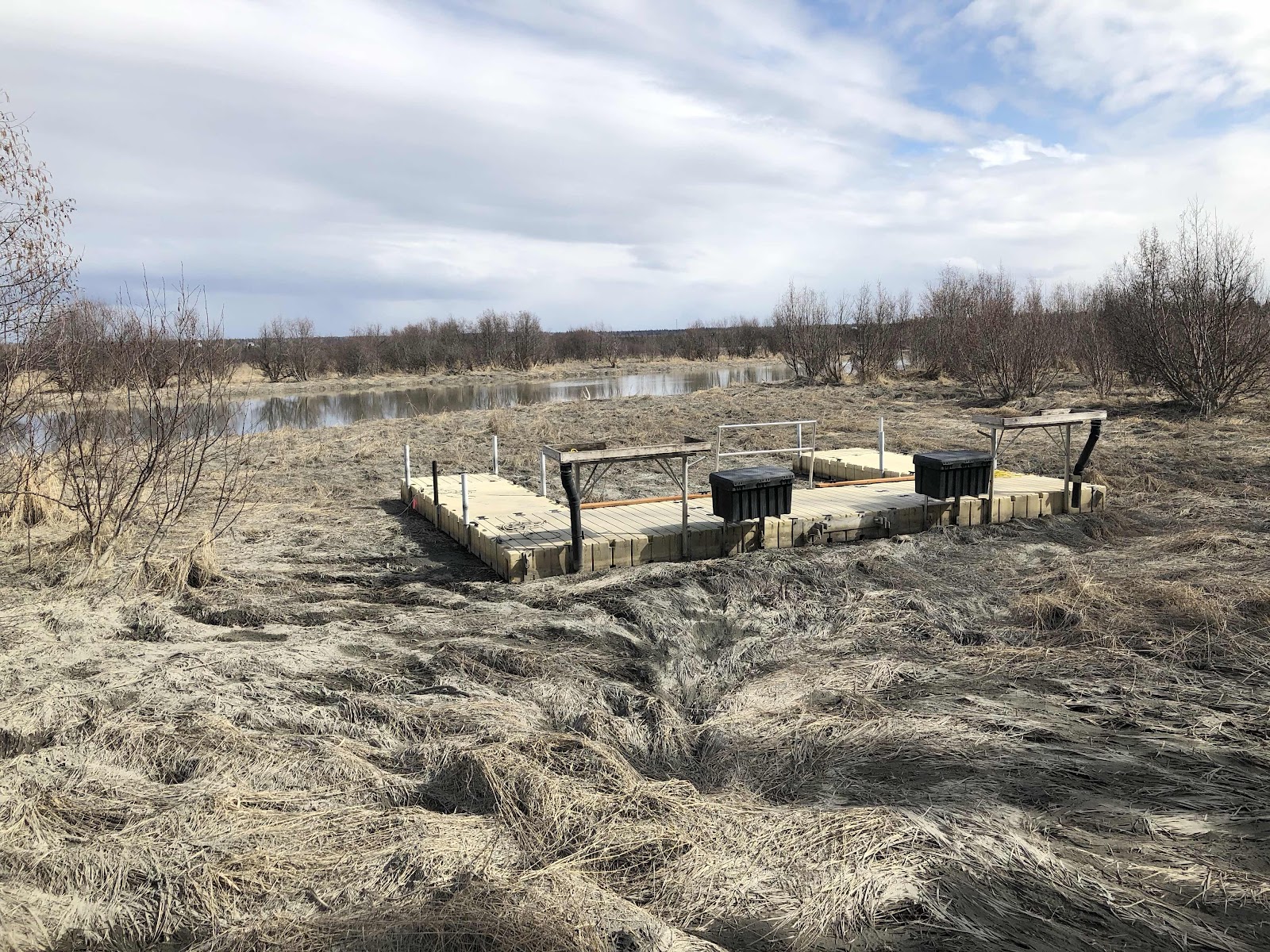 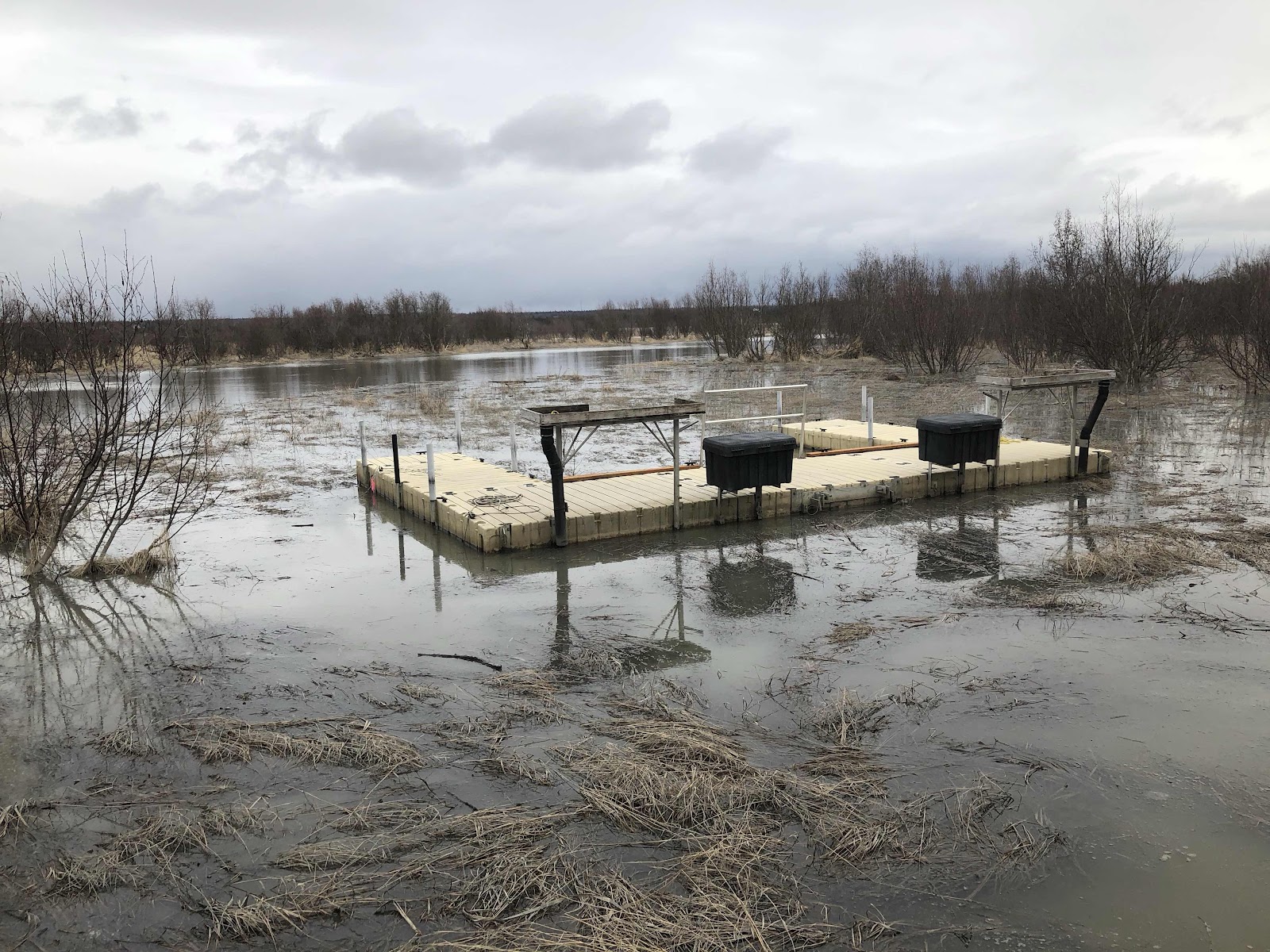 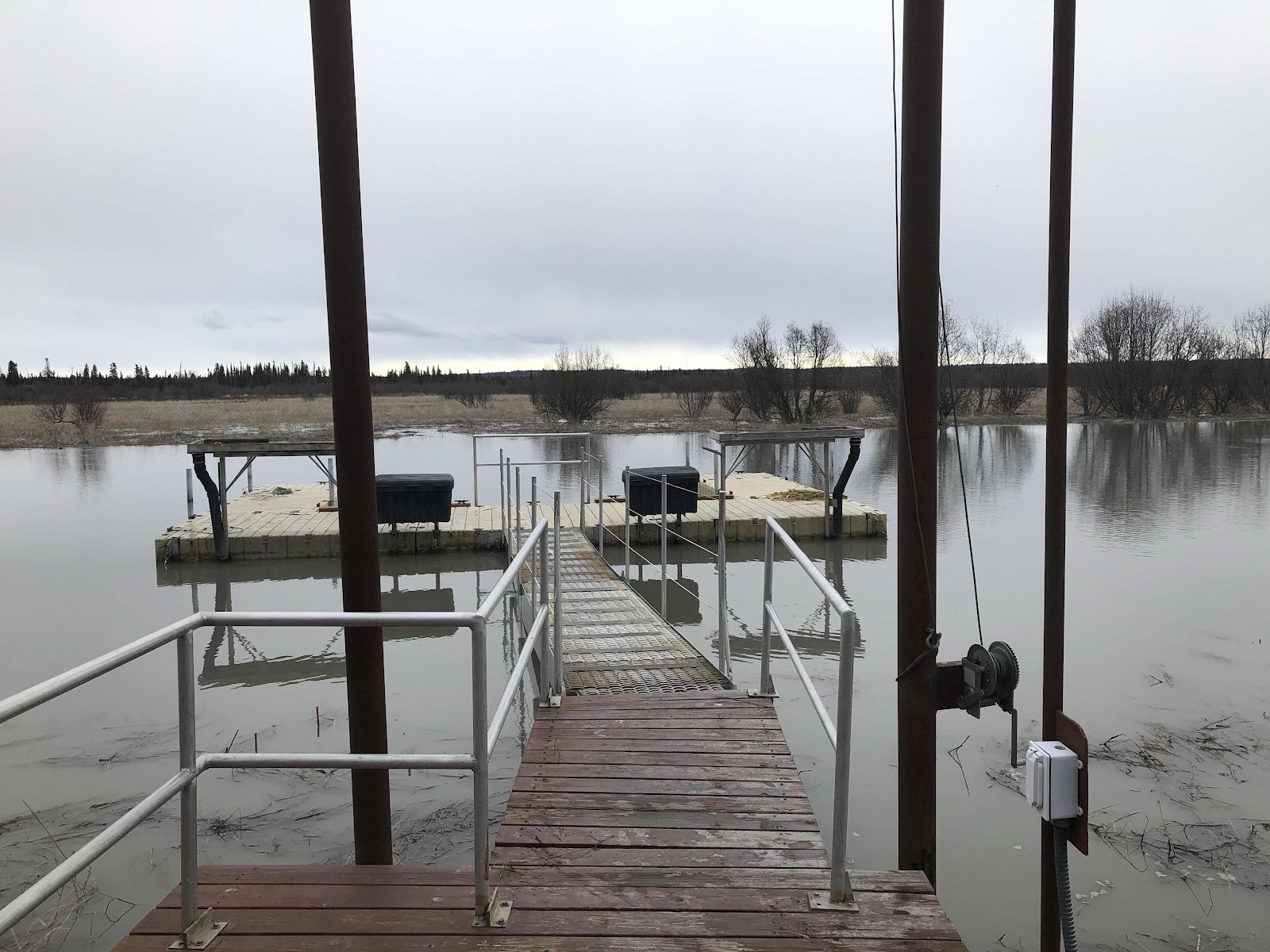 That’s what my high school football coach, Ron Stolski, would say in practice when the offense ran a successful play. Bingo, bango, bongo....the dock is successfully in for the 2019 fishing season.

Spring is in the air and if all goes well the dock will go in next week. Before the season gets under way, I thought it would be a good time to right a wrong and profile a group that I've overlooked for far too long. It's the Miller's and Stacken's.
The year Jane and I bought Beaver Creek Cabins & Guide Service we really didn't have time to market our business. The second year we were more aggressive. Besides increasing our web presence, we attended multiple sport shows, and began an ad campaign in a weekly publication called Outdoor News.
The ad we were running in Outdoor News had been out for several weeks and we were a little disappointed that we hadn't received any calls. The renewal was coming and conveniently we received a voice mail message from a lady who saw our ad and had questions about traveling to Alaska. The timing of the call was suspect. Don't ask me how I know, but I've seen this practice in the advertising world; sales people posing as potential customers to make it seem like the ad is generating calls. My suspicion grew when we played phone tag on multiple occasions and would never speak to the caller.
We were about to give up on this "sales lead" when the phone rang and we finally connected with Jodie Stacken. After several questions, she booked a June trip for her, her husband Mike, and their friends Dick and Kim Miller. At the time, we would have never guessed what this contact would lead to. To quote Humphrey Bogart in the movie Casablanca, "....this is the beginning of a beautiful friendship."
We knew these guys were from Minnesota, but on their first trip to Alaska we were surprised to find out the Miller's and the Stacken's owned lake cabins 20 miles from where Jane and I grew up. Small world.
Since their first trip to Alaska in 2005, it's become apparent that Alaska has connected with them. When asked, Kim thought they've been back 10 or 11 times.
And they liked it so much they've shared the Alaska experience with family and friends as well.
When it comes to the outdoors, I'm a one trick pony. What I mean by that is it's all about the fish for me. On the other hand, these guys are a bit more rounded and all four of them are avid hunters. Even though I don't do much hunting, I love to hear stories about it. What I like even more than the stories, is when they travel to Alaska, they bring a cooler full of venison. Whatever they don't eat they leave with us (they need the room to bring back their salmon).  All the venison is processed by them, and I'm here to tell you it's the best I've ever had.
This fish is a great memory for me and anytime I can post it I will. This is the first king salmon that Gene caught on the Kenai. It took us quite a few years of trying, but the wait was definitely worth it. Whenever I see Gene I tell him his fish was on my bucket list and I was so happy to be able to cross it off. He says it's pretty special too.
They're not always about the king salmon. They're also pretty good at catching red, pink, and silver salmon as well.
Whenever Jane and I are back in Minnesota, we make it a point to get together with the Miller's and Stacken's. Whether it's getting together for dinner, to watch a hockey game, or even ice fishing, their company is always appreciated.
I'm ending this post by saving the best for last. Of all my king photos, this is one of my all time favorites. Kim was the first person to really embrace her fish and wasn't afraid to get slimed up. Smiles for the both of us.

Dick, Kim, Mike and Jodie...Jane and I really value your friendship.

Whosoever holds this hammer, if he be worthy, shall possess the power of Thor...

Fish whackers, fish clubs, whatever you want to call them, they’re an important implement in a salmon fisherman’s box of tools.

And, they’re unique. As unique as the person using them. Click here to read a previous blogpost about the different fish whackers in my lineup.

For 2019, I have a new fish whacker that my friend Will Robertson crafted for me. The handle is made of ipe, and the head, bois d’arc. Ipe is a Brazilian hardwood that is so dense it won’t float. Bois d’arc is native to Will’s home state of Texas. It’s exceedingly hard, and resistant to wear and water. According to Will, bois d’arc was used in WWI (and before) as the gasket around a prop shaft.

Mjölnir! Thunder and Lightning! Thanks Will. Can’t wait to give the old wood shampoo to a few salmon this season. 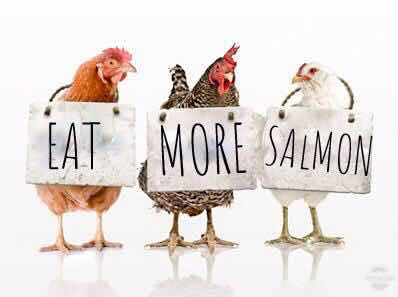