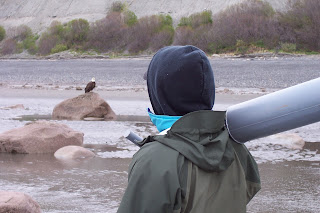 Jane digging razor clams near Clam Gulch in May.

If it weren't for my wife Jane, Beaver Creek Cabins & Guide Service would not exist.   She works her tail off handling guests, maintaining and cleaning the cabins, and perhaps biggest of all, taking care of me.   To put it bluntly, she lets me fish and takes care of everything else.

So, looking over the photos from the 2012 season, I was glad to find quite a few of Jane recreating on the Peninsula.   It's good to see that in between the demands of running a seasonal business she/we found time to enjoy the bounties that Alaska has to offer. 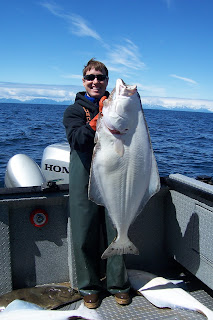 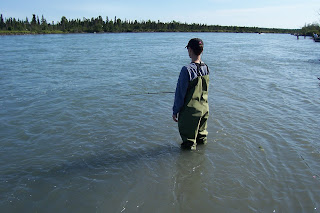 .....red salmon fishing in July on the Kenai River. 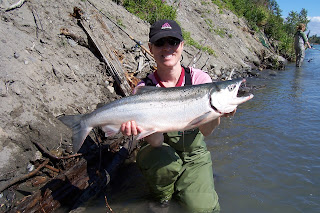 ....catching red salmon  in July on the Kenai River. 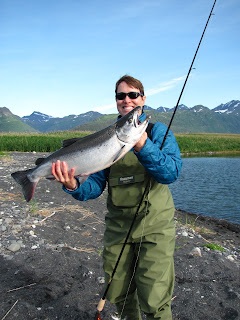 I know in a million years Jane would have never imagined that she would be doing what she's doing today.   But you know, it's what John Lennon said:  life is what happens when you make other plans.   Keep in mind, he also said:  I am the walrus, googoogachoo!  Ha!

I'm lucky guy to have a partner in Jane.   By the way, Happy Anniversary.

Posted by Beaver Creek Cabins & Guide Service at 4:50 AM 5 comments: 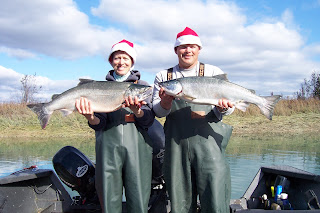 Merry Christmas from the both of us.

Posted by Beaver Creek Cabins & Guide Service at 6:53 AM 2 comments: 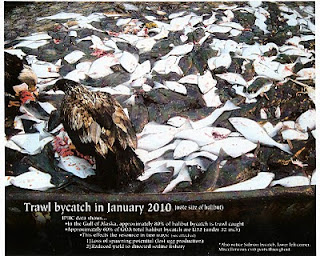 If you're reading this blog I know that you are a sportfisherman.   A link was sent to me about a petition to take a serious look at the incidental bycatch of halibut and chinook salmon in the Alaska trawl fishery.   If you care about the future of sportfishing in Alaska, click here and sign the petition.

I am not against commercial fishing and believe it should not be shut down but this particular method needs to be modified so there is less bycatch kill of non-targeted species.   If the trawlers are not held accountable there will be no change.

Let your voice be heard.

Posted by Beaver Creek Cabins & Guide Service at 6:45 AM 3 comments: 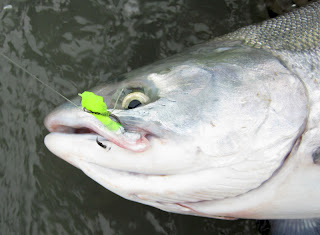 The whole point of this blog is to share, educate, and inform.  This past summer I learned a great tip for catching sockeye (red) salmon and I hope readers of this blog will try it.  It is nearly fool proof and is perhaps the best method of legally and efficiently hooking a sockeye salmon that I know of.

Using a circle hook for sockeye salmon first came to my attention last winter.   One of the most knowledgeable fisherman I know, Francis Estalilla, the Fishin' Physician, told me he first experimented with circle hooks during the 2011 season.   Between Francis and his fishing buddies they hooked legally in the mouth over 130 sockeye salmon using circle hooks.....not one illegally snagged.   I'm skeptical of many fisherman, but Francis' information has been sound and this concept intrigued me.

Fast forward to 2012.  When the king salmon fishery closed in July I had an opportunity to give circle hooks a try for sockeyes.  I gave Francis a call to see if I could join him on a gravel bar to watch and learn what he was doing.  After about 10 minutes of watching the clinic that Francis and his buddies were putting on, I asked if he had an extra circle hook for me to use because I wanted to try it for myself.   He gave me one and it didn't take long before I caught and landed my first sockeye.

I fished circle hooks for the rest of the sockeye run and I'll have to say the results were impressive.   It wasn't completely foolproof, I managed to snag a couple of fish in the fin, but compared to a standard octupus hook it was a non factor.   There's no doubt in my mind if circle hooks were used by the anglers who do the "Kenai Rip" or "Kenai Jerk" very few of these fish would be snagged and would not have to be released either injured or dead.   Defintely a better way to legally target sockeye salmon.

What do they look like?  The hook on the left is a Gamakatsu Nautilus circle hook.  The hook on the right is a standard Octopus hook.   The size that seems to work best on the middle and lower Kenai is a 2/0.   To be properly rigged use a 25lb test line for a leader and tie a standard bumper loop knot, but only do this with 2-3 twists.  If you do more than this the angle of your hook will be too severe and will not find a proper purchase in the mouth of the fish.   To finish off the rig tie a small piece of yarn on the loop (take a look at the top photo for a reference).

Because a circle hook is different than the standard sockeye rig on the Kenai the technique is slightly different as well.   Your flipping will be the same but your hook set will be different.  Instead of an agressive "jerk" set when you feel the bite with a standard rig, with a circle hook you'll lift your rod tip up slow and steady until you feel weight.  Fish on!  If you "let her rip" when fishing a cirlce hook you will pull the hook through the mouth too quickly and that will result in a missed fish.


﻿
Seeing is believing when it comes to using a circle hook.  The mechanics of how a circle hook works can best be seen in the video above.
A final thought.  One thing I found by using circle hooks is that I'll have less "action" than fisherman who aren't using them  This is because the majority of their fish were snagged in the back or belly and had to be released.  I'll definitely take less action when I know I injure less fish and reach a legal limit (usually) more quickly than a non-circle hook sockeye fisherman.   It's a win/win!
So, in 2013 don't be afraid to give the fish friendly circle hooks a try for sockeyes.  I think you'll like the results.
﻿
Posted by Beaver Creek Cabins & Guide Service at 8:08 AM 7 comments: