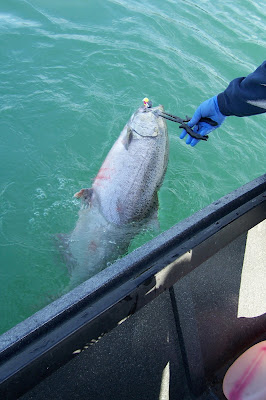 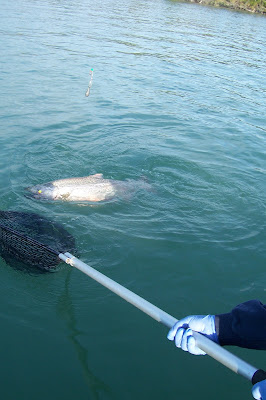 In Alaska, you can not remove a king salmon from the water if you intend to release the fish. If I know the fish is going to be released there are two things that go through my mind to make this as easy on the fish as possible. If I have to net the fish I'll reach for my rubber net. A rubber net is far superior to a standard mesh net when it comes to releasing a fish. Rubber is gentler on the fish and will rarely scratch scales,fins or bruise the nose of the fish. A better way to release a fish is not to net it all and use a needle nose pliers to remove the hook. If the hook is imbedded deep in the mouth, cutting the line as close to the hook is an acceptable alternative.

I know quite a few of my clients would love to take a king out of the water for a picture before a release but in all my years of fishing I've come to the conclusion that this is a law that is best for the fish. This practice of not removing a fish from the water has resulted in mortality rate on the Kenai of less than 10% (Bendix study).

One thing that I have yet to do is what I call the "Keeneye" king photo opportunity. This is a reference to one of the Kenai's biggest advocates of catch and release fishing and how he photographs his fish. The "Keeneye" when taking a photo will jump out of the boat in a shallow water area and cradle the fish in a half in the water, half out of the water pose. Beautiful, beautiful photographs. I would love to have a client catch and want to release a 90lb plus fish and I would gladly wade in the cold, glacier waters of the Kenai for a photo of a lifetime.

Now the question I have is this. Will 2010 be the year of the "Keeneye" king pose? Let's hope so. 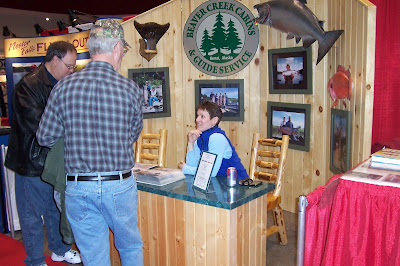 Well, I guess the next best thing to fishing is talking about fishing.


Jane and I just finished a five day sport show in St. Paul, Minnesota. This was our seventh time attending this show and although the days were long it was still fun to be there. Overall, the traffic was down compared to previous years but there were quite a few major events scheduled at the same time in the same area. There are only so many parking spaces in downtown St. Paul so a sport show tends to lose out on attendance. The Minnesota Wild played hockey the first night, followed by the Swarm, a professional lacrosse team, and what is usually the busiest day of any sport show, Saturday, we were competing with a Brad Paisley concert. The single biggest event that affected the show had nothing to do with parking. It was the playoff football game on Sunday between the Minnesota Vikings and Dallas Cowboys. You could pretty much throw a bowling ball down the aisle and not hit a single person. Not much you can do about that but at least the Vikings won.

Jane and I had a great time visiting with quite a few people that have stayed and fished with us in the past. It's always great to relive a person's trip of a lifetime. We also enjoyed visiting with people who are putting together trips of a lifetime and our glad that they are choosing to spend part of their stay with us.

Our next sport show will be in St. Cloud Minnesota on February 12th, 13th, and 14th. If you are interested in attending we have a limited amount of tickets available. Drop us an email and tickets will be given out on a first come first serve basis until they are gone. Hope to see you there!
Posted by Beaver Creek Cabins & Guide Service at 7:30 PM 3 comments: