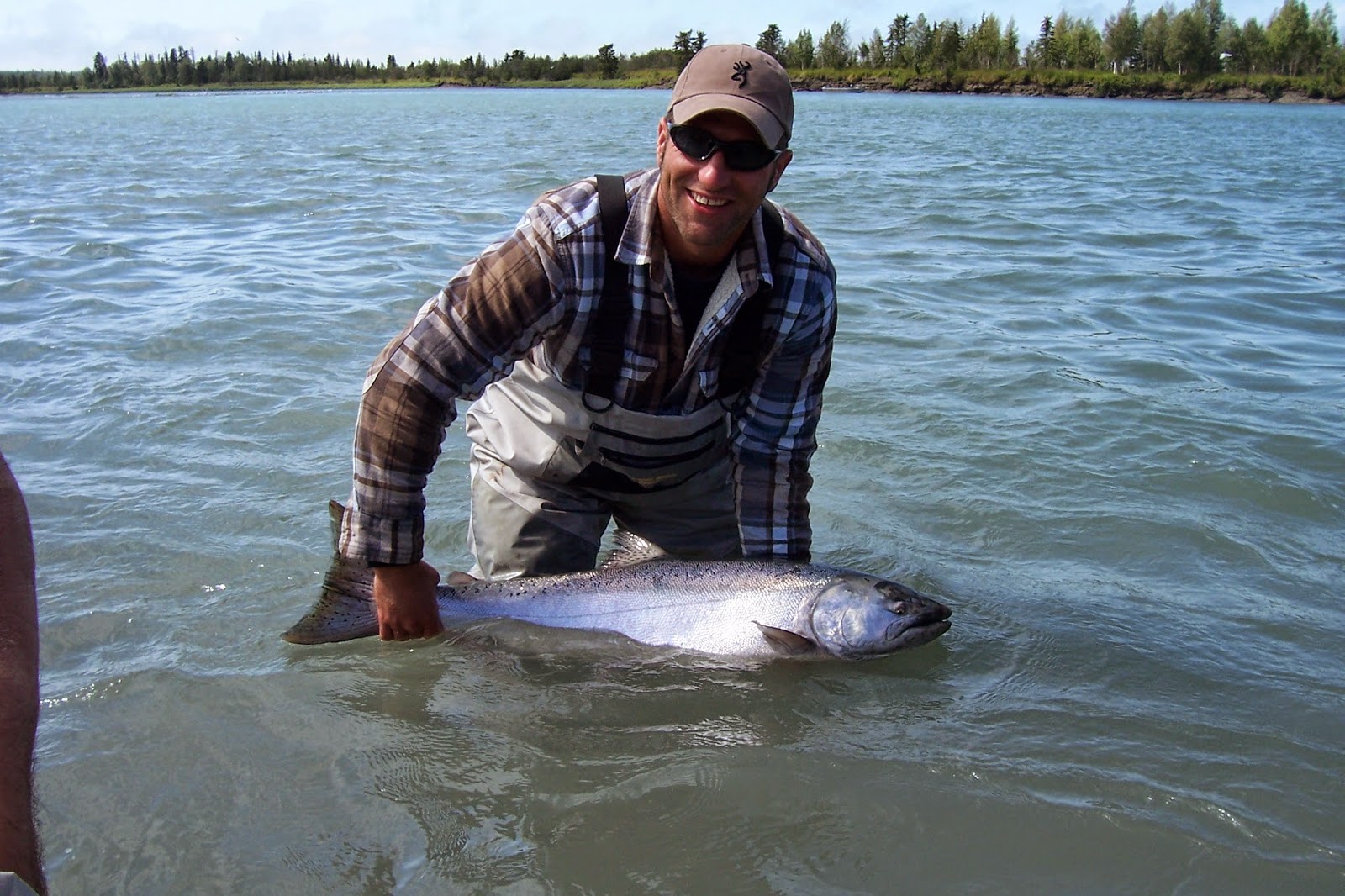 The best week of king fishing that I've had as a guide came to an end when the Alaska Department of Fish and Game announced that the 2014 king salmon will be closed prematurely in an effort to meet spawning goals. 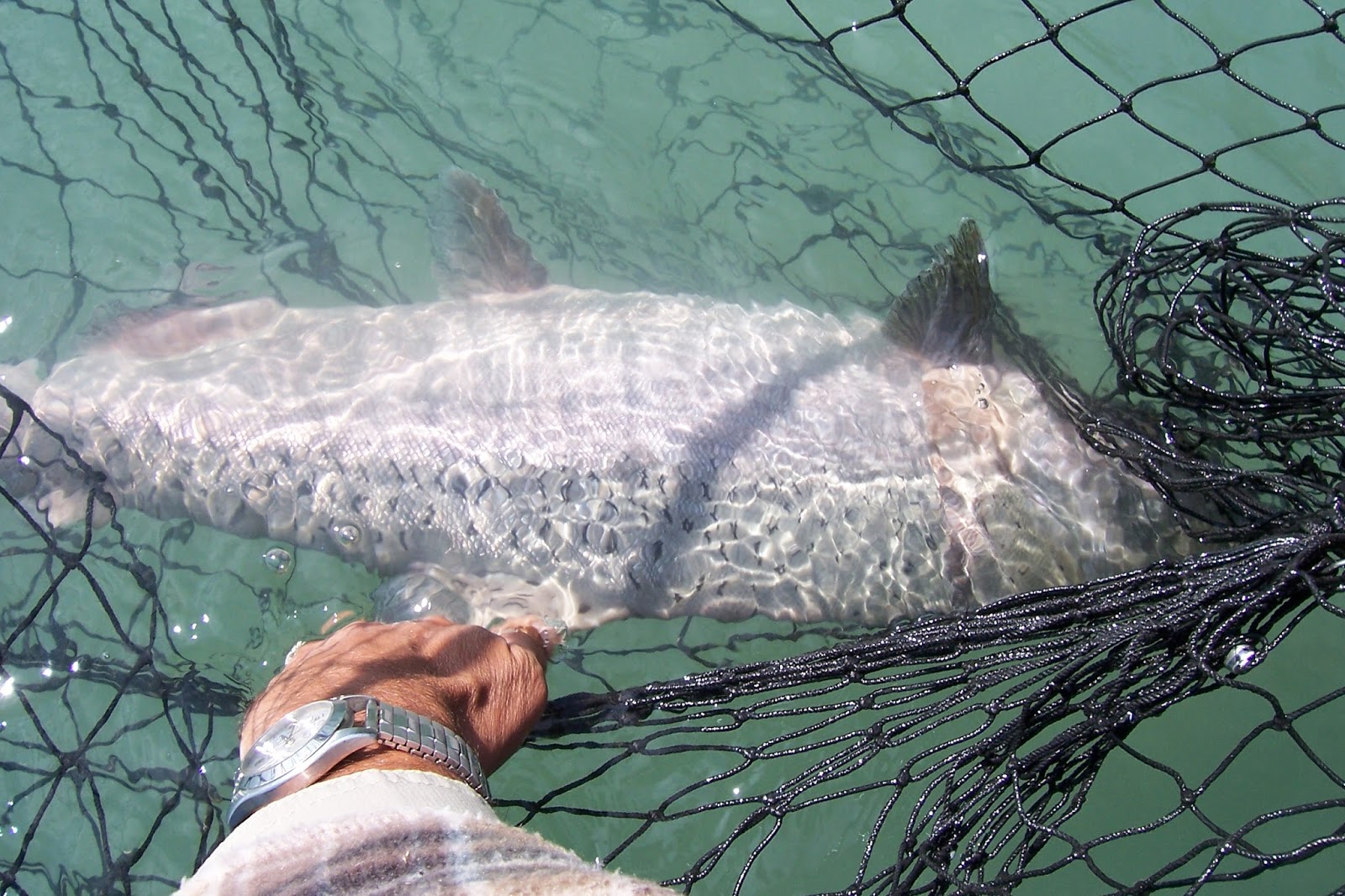 Last week I reported that ADFG used the step down measure of catch and release king fishing.   This action allowed anglers to enjoy the pursuit of kings with a minimal affect to mortality (ADFG estimates 8.5% will not survive).   This is a cautious approach to monitoring the run.  If things do not improve the next step is a complete closure. 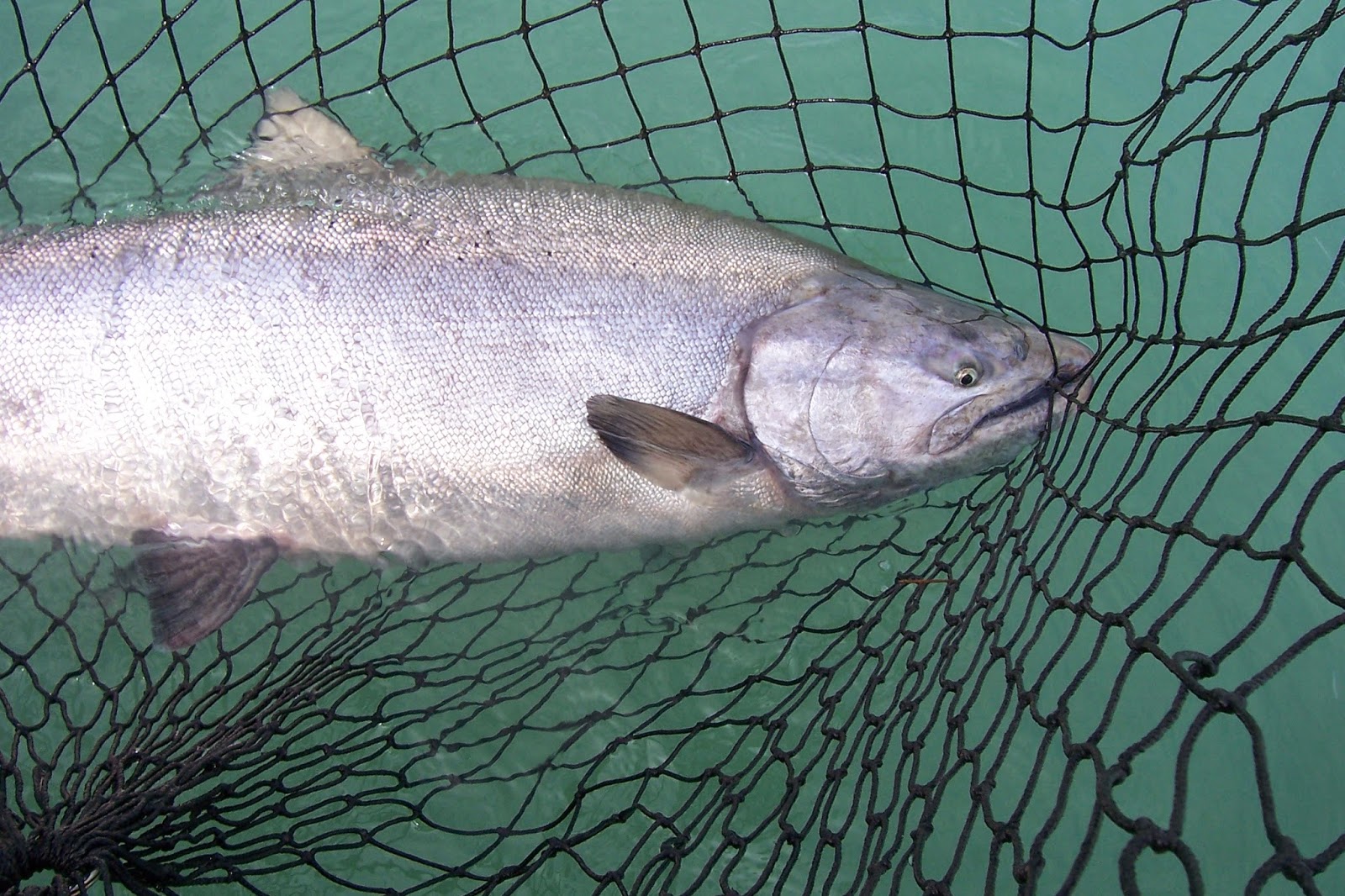 For the guys who chose to catch and release kings this past week the action was unbelievable. 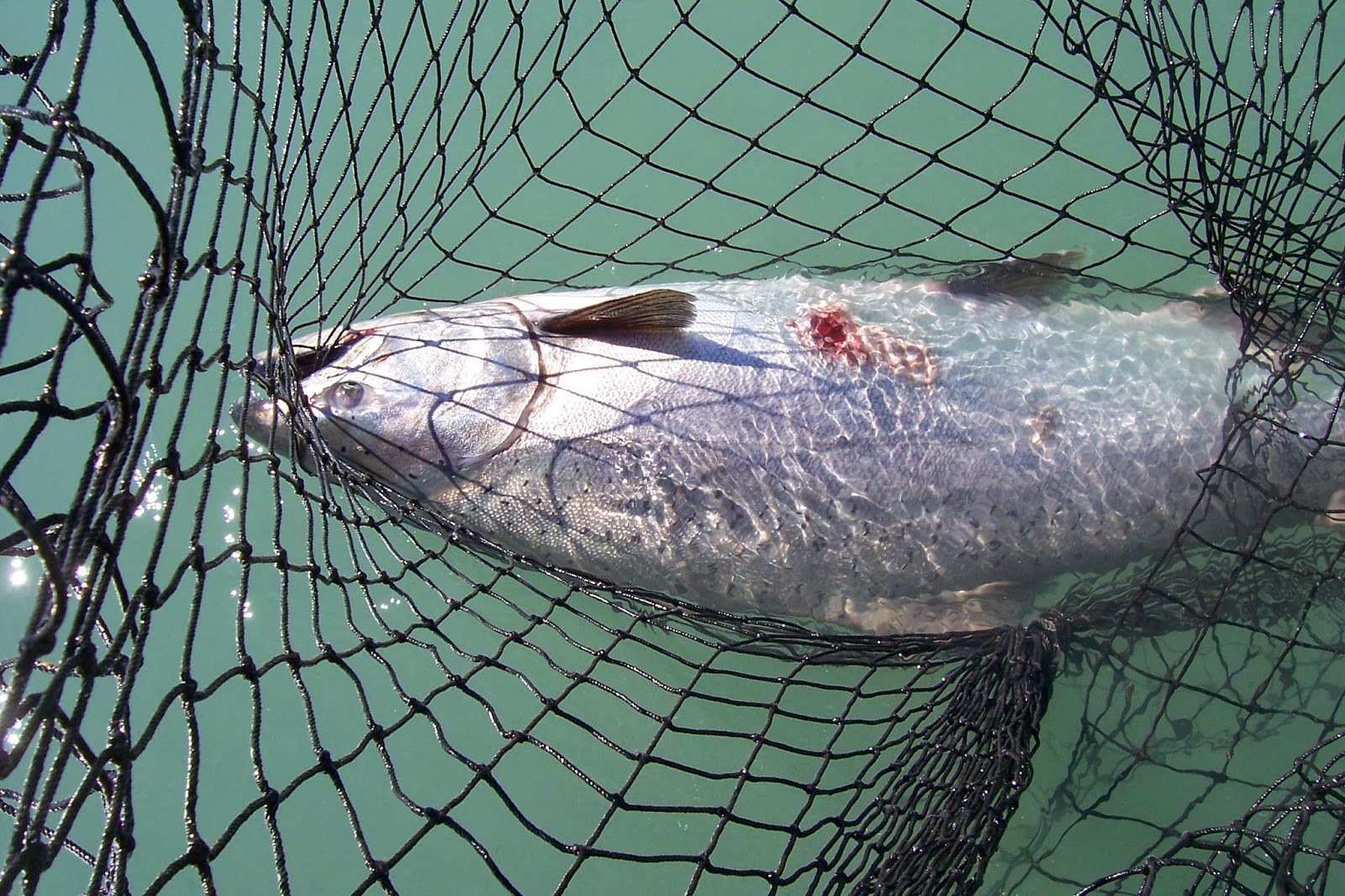 Double digit days were not out of the ordinary. 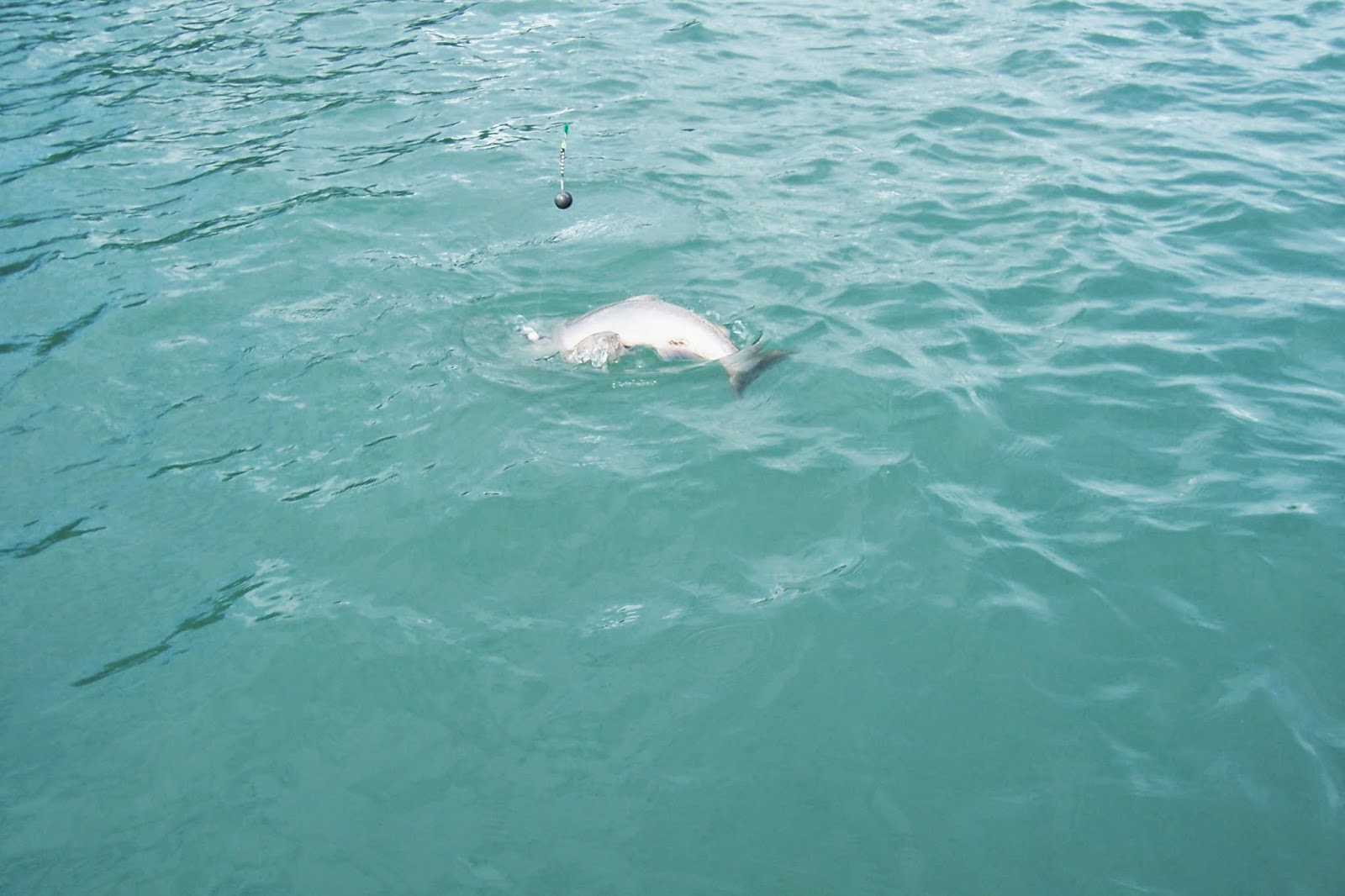 If you like to catch kings, and the Kenai River goes to catch and release, you shouldn't hesitate whether or not you should be on the water.

For my clients that wanted to bring back home fresh Alaska salmon, we took a break from the king action and got on the bank to catch red salmon.

I'd be remiss if I didn't mention the other guys who fished kings this past week.   Adam, Charlie, Tyler, Galen, Mike and Dave, your fish were photographed in the net but you weren't.   Maybe next time you'll wear chest waders and jump in the water for a photograph like Jason did.

The week ahead I was scheduled for king fishing but now our efforts will turn full time to red, pink, and silver salmon.    For all of my August clients who are reading this, yes, we are already catching pink salmon with a few rumors of silvers coming to the net as well.

Posted by Beaver Creek Cabins & Guide Service at 11:13 AM 3 comments:


As of Saturday, the Alaska Department of Fish and Game announced that the Kenai River king fishery will be catch and release until the end of July due to low abundance.   If the numbers in the days ahead continue to decline ADFG will most likely close the king fishery entirely.

So, that is the bad news.  The good news is king and red salmon fishing last week was not so bad.   Some groups struggled, but others found success.

After a one year absence, I had the pleasure of spending several days on the water with George and Jerry French.  They were joined by first timers William and their baby brother Ken.
George is a long time reader and commentator on this blog.   Always positive and quick with a story, our time spent together is always too short.   Whenever George is here with his group, whether it's family or not, I always think of the sign that Big Will has in shop:  "Fishing is the Least Important Part of Fishing."    I may see Jerry this fall for a silver trip but George will most likely put together another "trip of a lifetime" next year.
It's always fun to get back in the boat with someone from years gone by.  Mike Anderson last fished with me nine years ago and his touch for king fishing hasn't worn off.   On the second troll of the morning he boated this 42" king salmon.


And how about this for the other side of the spectrum.  Ning had never fished in his life before and chose me to take him out on his first adventure.  I'd like to say he handled the fight of this fish like an old pro but I'm afraid I'd be lying.   Do you think he was a happy camper when this fish made it to the net?

Wish the action would have been better for Team Minnesota (pictured above) on Friday afternoon.   Everyone at least caught one fish and they each had multiple chances at more.   I don't think they were too disappointed with their results because they talked quite a bit about coming back next year.
The third weekend of July is the time that I set aside for my own dipnet trip.   This is the haul from the A Team, or as my neighbor refers to us as, "Seal Team 6".   I didn't get a group photo of Dan, Mark, and Todd but I did take this photo of 100 red salmon.

The dipnetting was very good on Saturday so we decided to give Sunday morning a try (without Dan).   Our luck continued and our permits were complete for 2014.

This past week we had old friends and new friends at the cabins and I wanted to acknowledge them.  Joe, Dennis, and Leroy, it was fun to chase reds and kings with you.   Your great attitudes did not translate to a lot of action. Dick and Kim Miller....now I know why you guys make the best venison products.   Thanks for your help with all the fish.   Bob "the Coach" Laflamme, and his wife Janet "Chief Sealer" also helped with the processing of the fish.  Thanks guys and safe travels.

The week ahead I'll be doing a combination of catch and release king salmon trips and bank fishing for reds. I expect one to be a big game hunt and the other to be a harvest.  See you next Sunday. 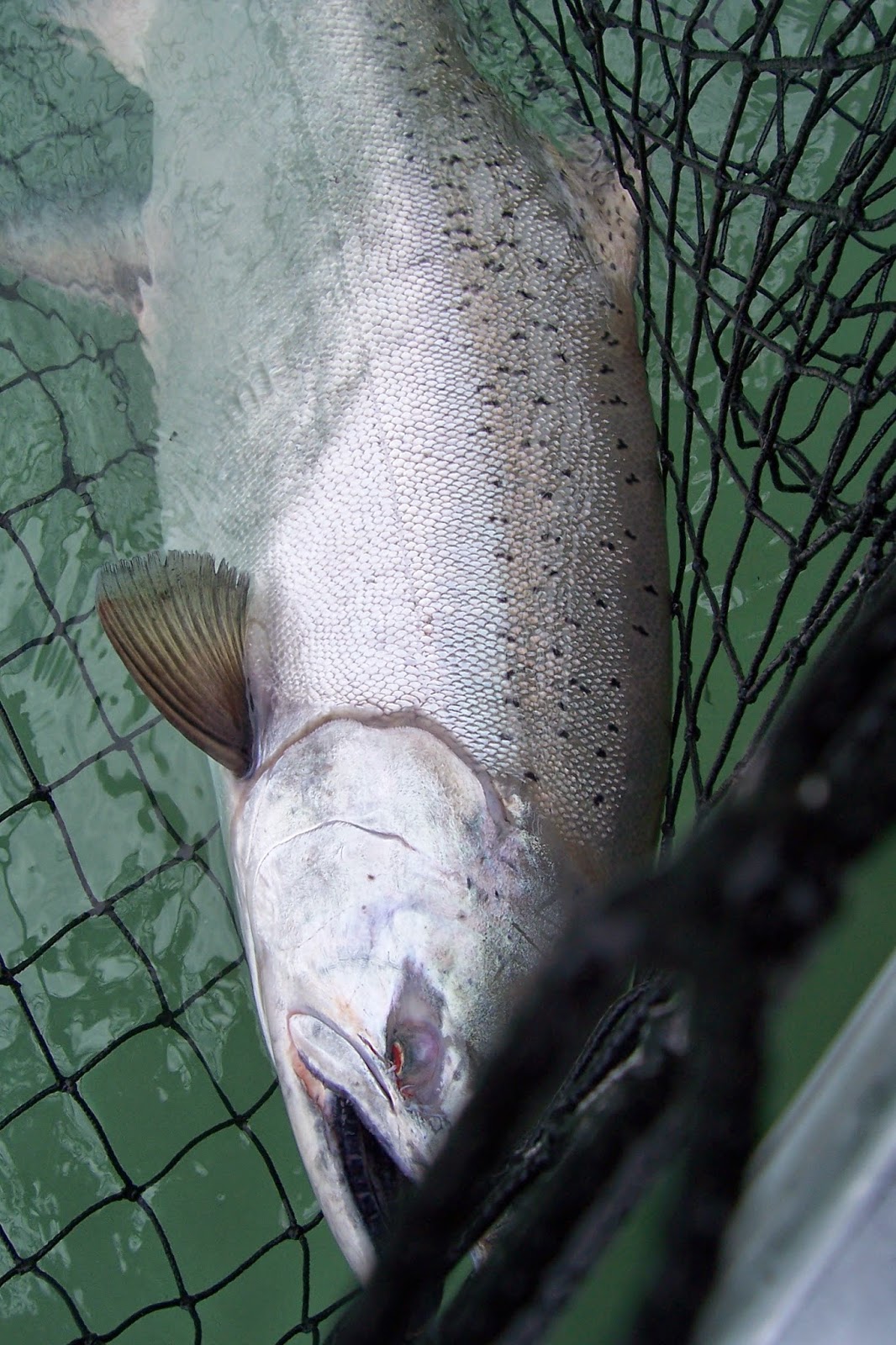 Here's the good and bad of it all.  King fishing is slow and if the numbers don't increase soon we will likely face restrictions.   Red fishing, on the other hand, is starting to ramp up and is getting better every day.

On to the report.  I was idle at the beginning of the week and it wasn't until Thursday that I had my first trip.   The photo above is a nice 25lb king that Bill Gunderson released.  He told me before he got in the boat he didn't want to keep any fish, he only wanted to practice catch and release.   It's amazing how the salmon gods listen to that kind of thinking and for that he was rewarded with the nicest king of the season to reach my boat. 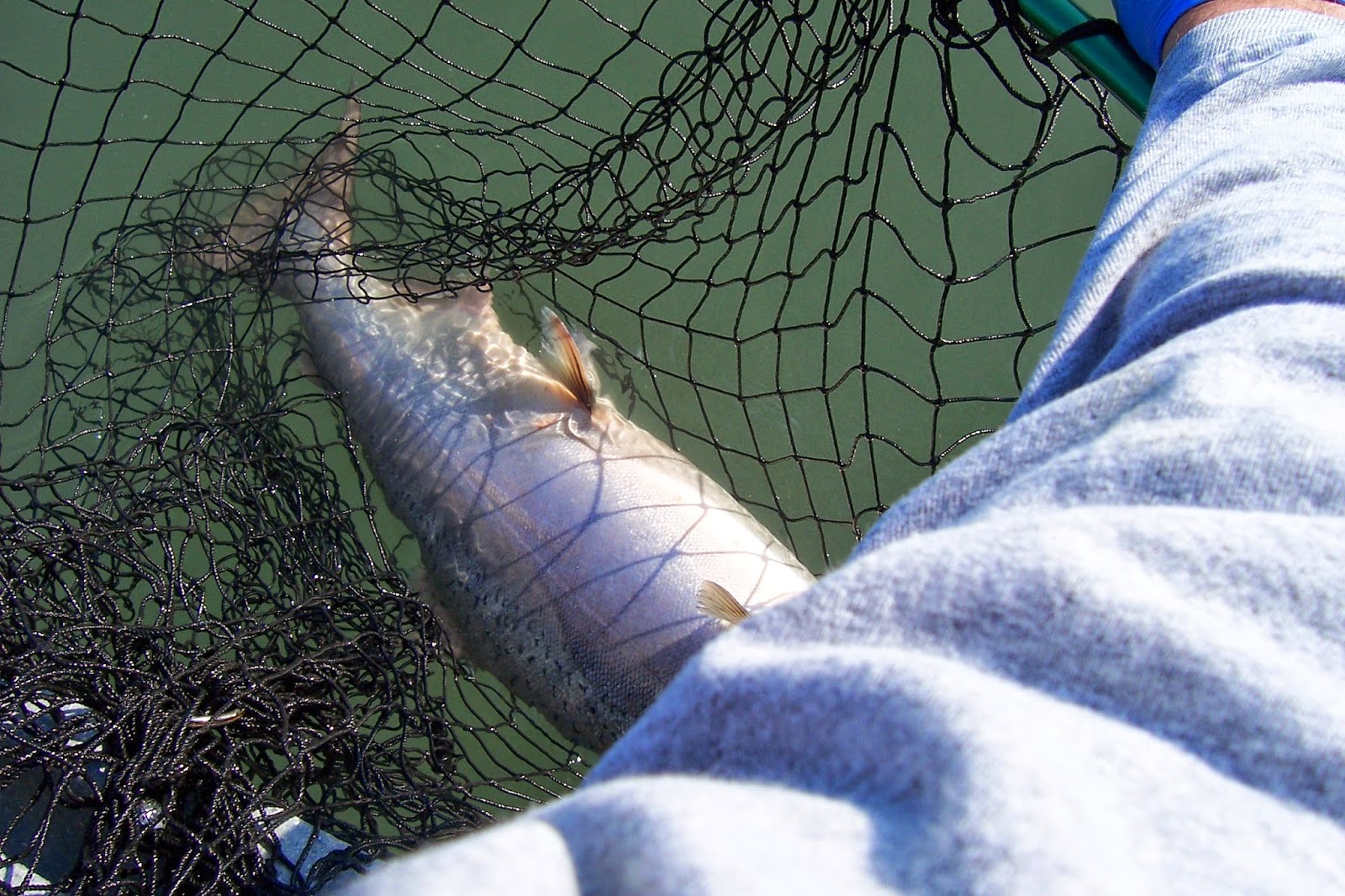 Bill's friend Pete also said he didn't want to keep any fish and he too was rewarded with this king.  Not large, probably 10lbs, but hey, it was a king.  Sorry about the quality of this photo but it's the only one I have. 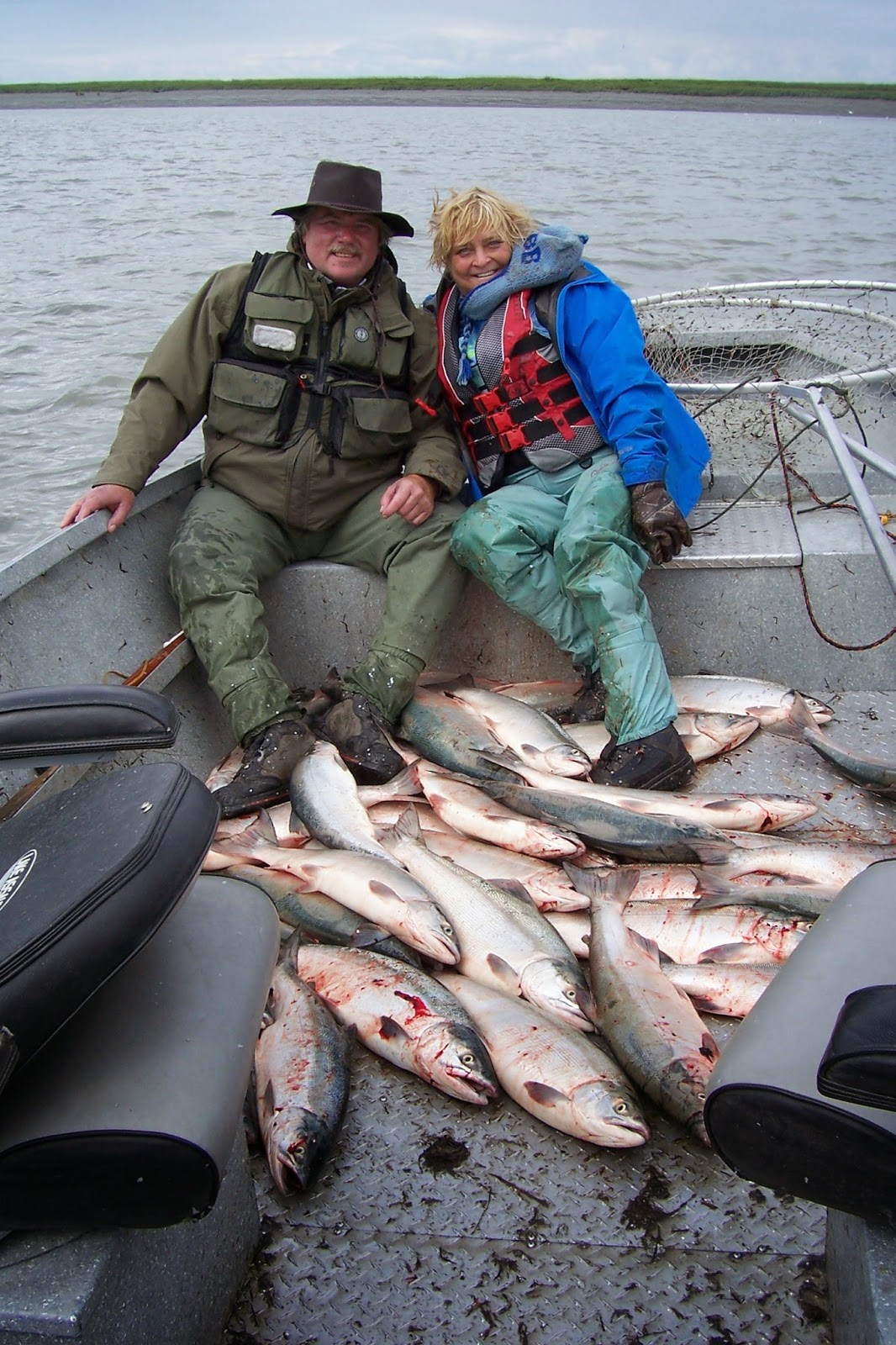 On Saturday I had the pleasure to get reacquainted with Gary and Tammy.   They booked me for a king trip and after a slow morning on the water I told them we should head down to the mouth of the river and give dipnetting a try (that's one of the many benefits of being an Alaska resident).   It wasn't fast and furious but we managed to get 45 reds. 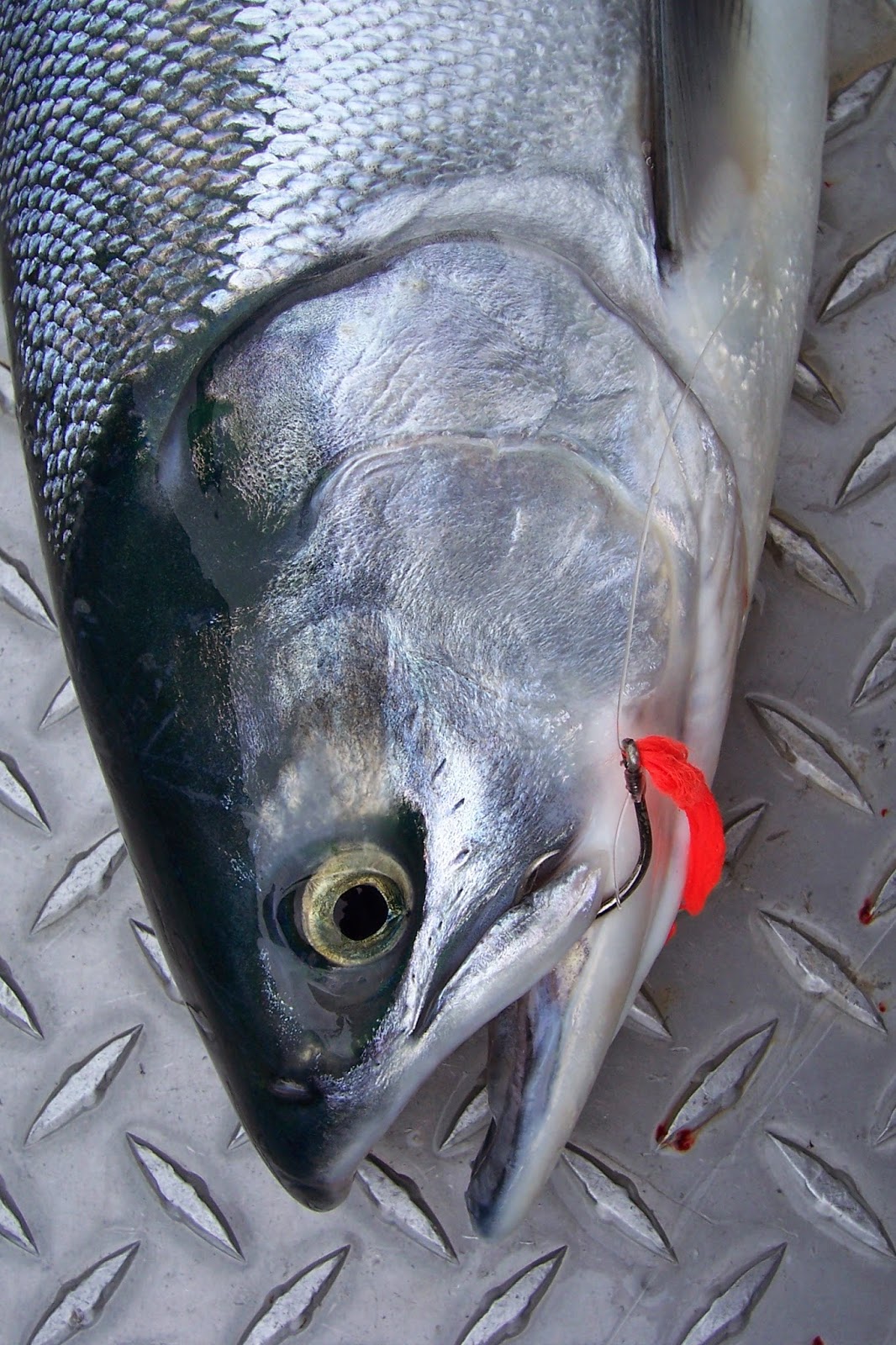 We also went out on the bank to flip for reds.  Here's a nicely placed circle hook right in the corner of the mouth.   I thank my friend Francis for telling me about the effectiveness of circle hooks.  It sure cuts down on numbers of foul hooked fish 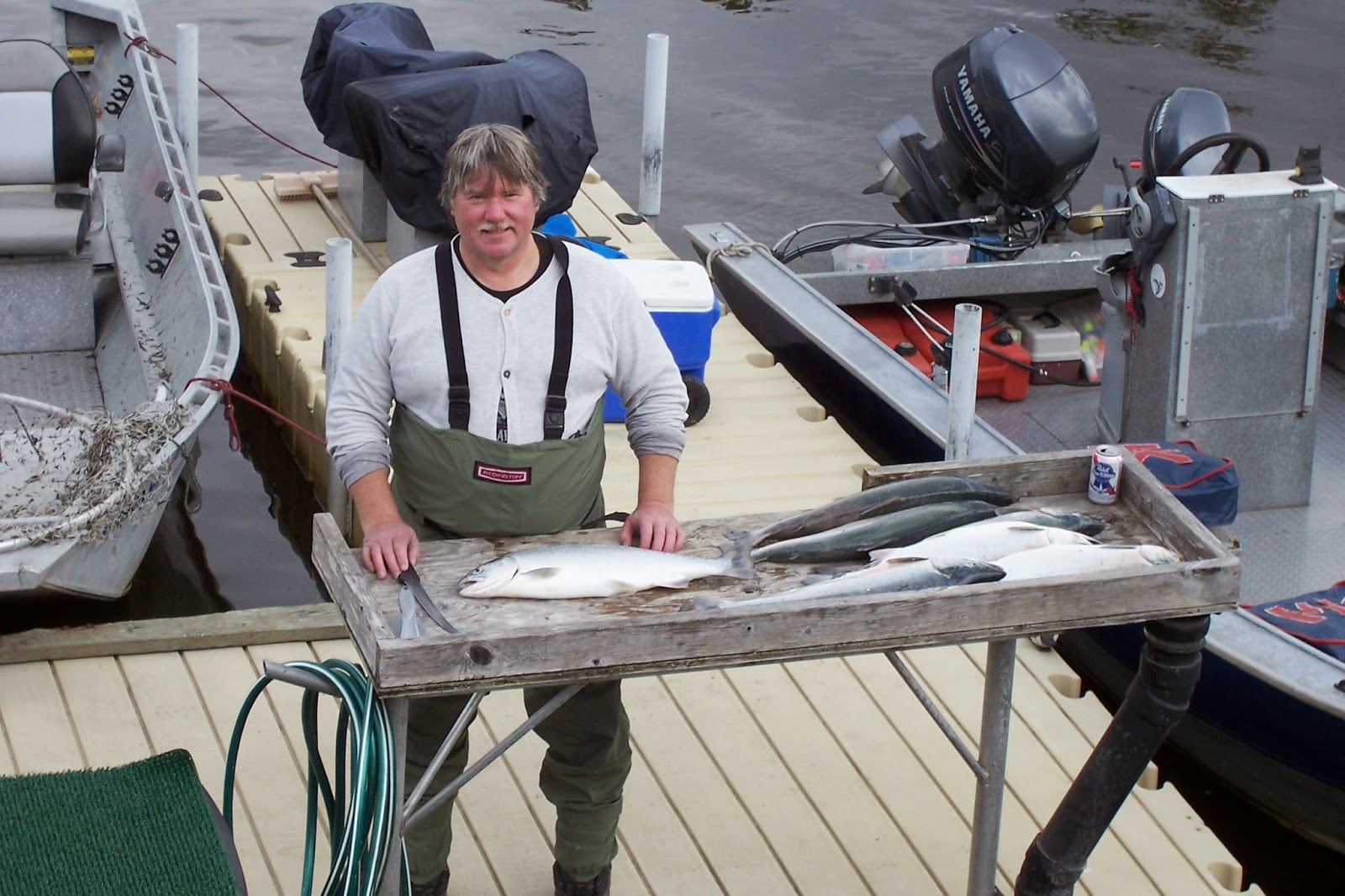 About the week ahead:  I'm on pins and needles.  I'm not worried about the red run at all but hopefully enough kings will find their way to the river to keep our season in tact.  Let's hope the next couple of tide cycles will bring in a few more kings. 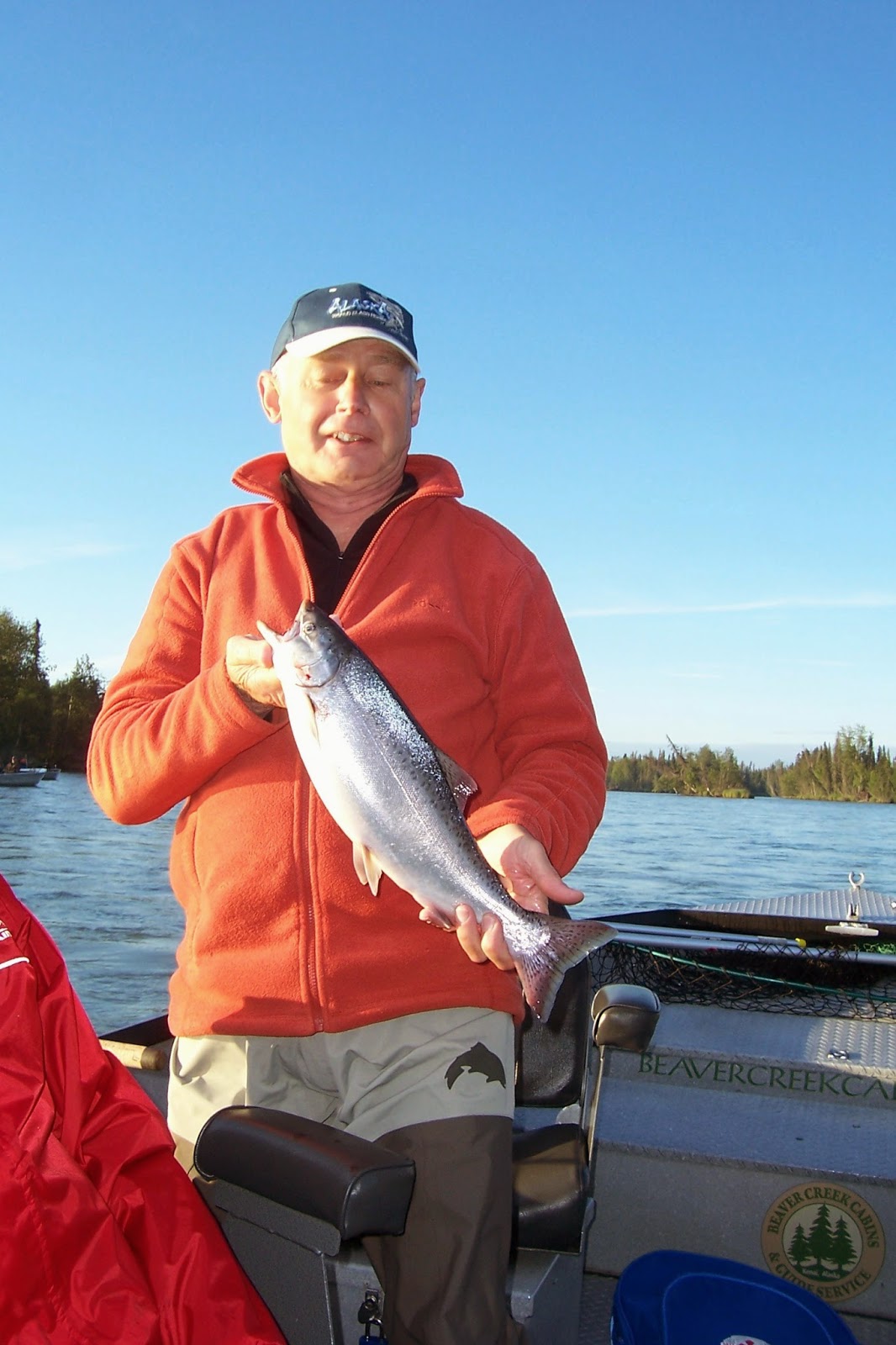 On the second troll of the Kenai River king salmon 2014 "reopener" Tony, from Team Germany (Bavaria) broke the ice with a jack salmon (a jack salmon is a king that is under 20" and Alaska rules permit an angler to keep this fish and continue fishing).   Not exactly a world famous Kenai king but it was a great start and I figured we had all morning to find more.  Well, little did we know that Tony's salmon would be the only bite we would have. 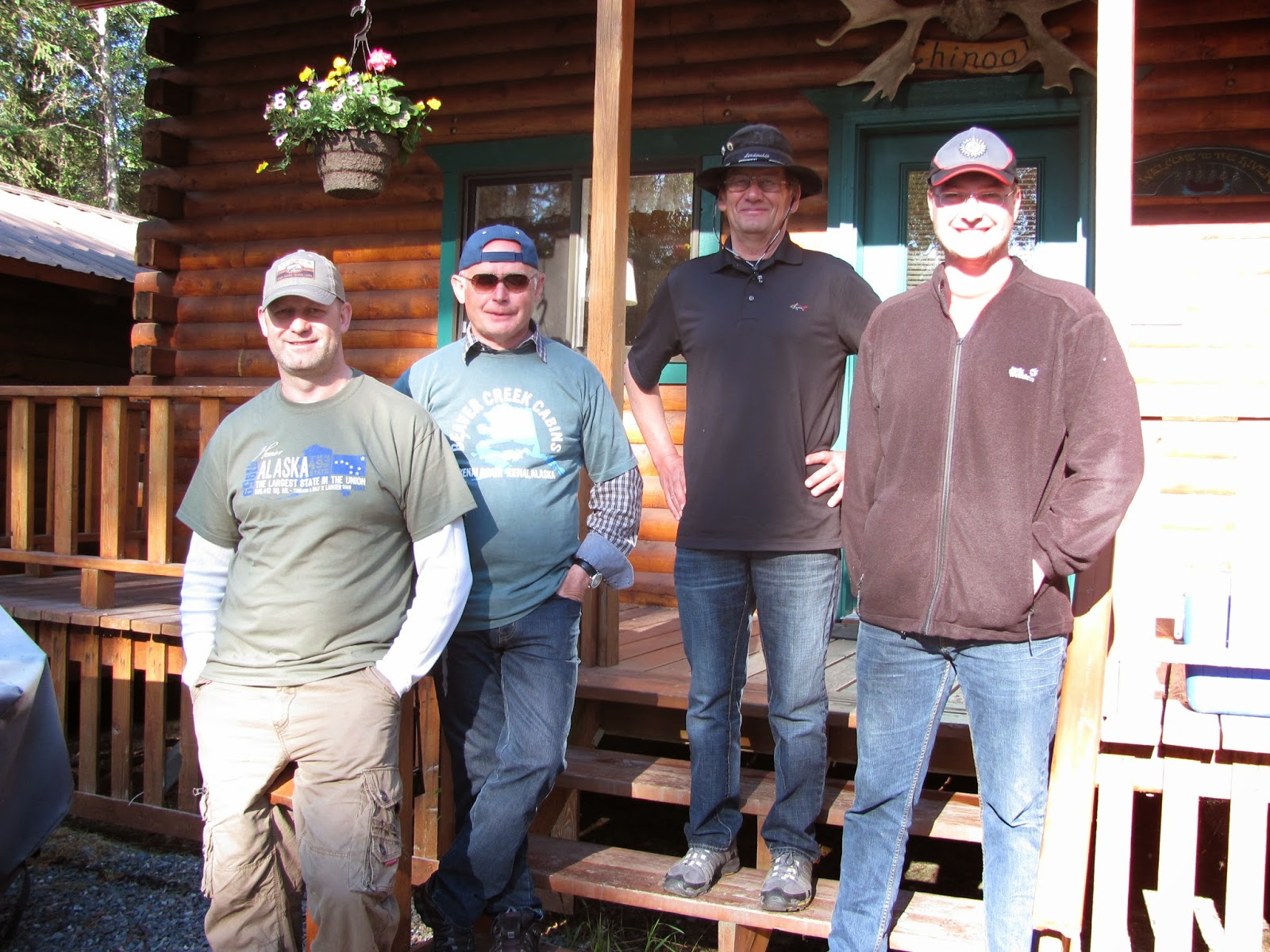 I was hoping to have a group fish photo of Team Germany (Bavaria) but instead had to settle for one on the deck of their cabin.   From left to right is Eiko, Tony, Rudy, and Flo.  These guys spent 10 days at our cabins fishing the ocean, the Kasilof, Kenai, and Russian Rivers.  They also did a fly in bear viewing trip to Katmai.   They were strangers when they arrived but Jane and I felt like they were family before they left. The good news for us is they plan to return in 2016 (a non World Cup year). 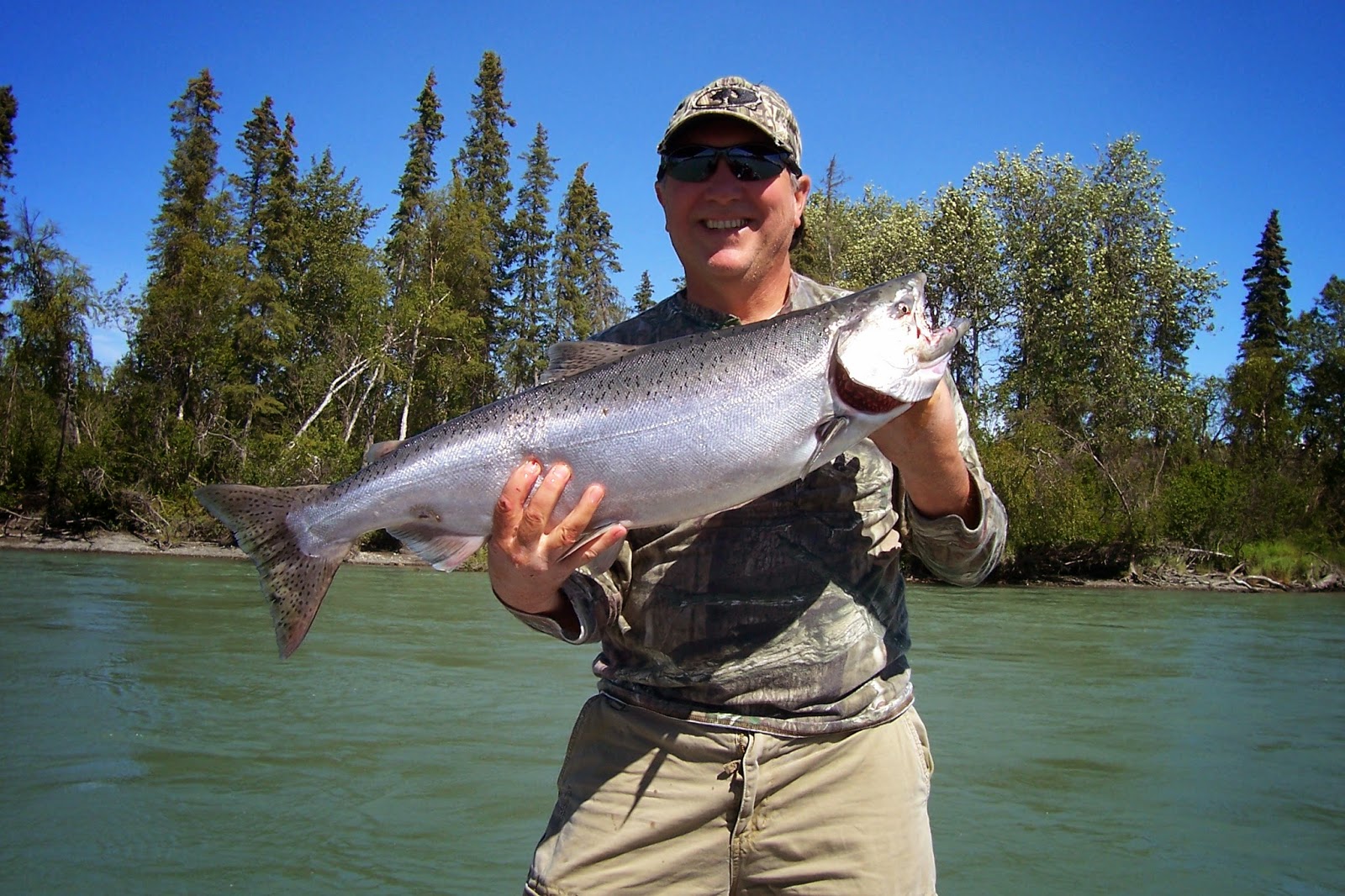 In my afternoon trip of the reopener I had the pleasure of fishing with Chris and Tony Smith.   About two hours into the trip Chris nailed this 18lb king.   Not bad, not bad at all.   At this point of the day we had over three hours to find Tony a fish.  Unfortunately, there were no more takers.    So the sum total for the first day of the season was two king salmon.   I've had better first days and I've had worse first days. 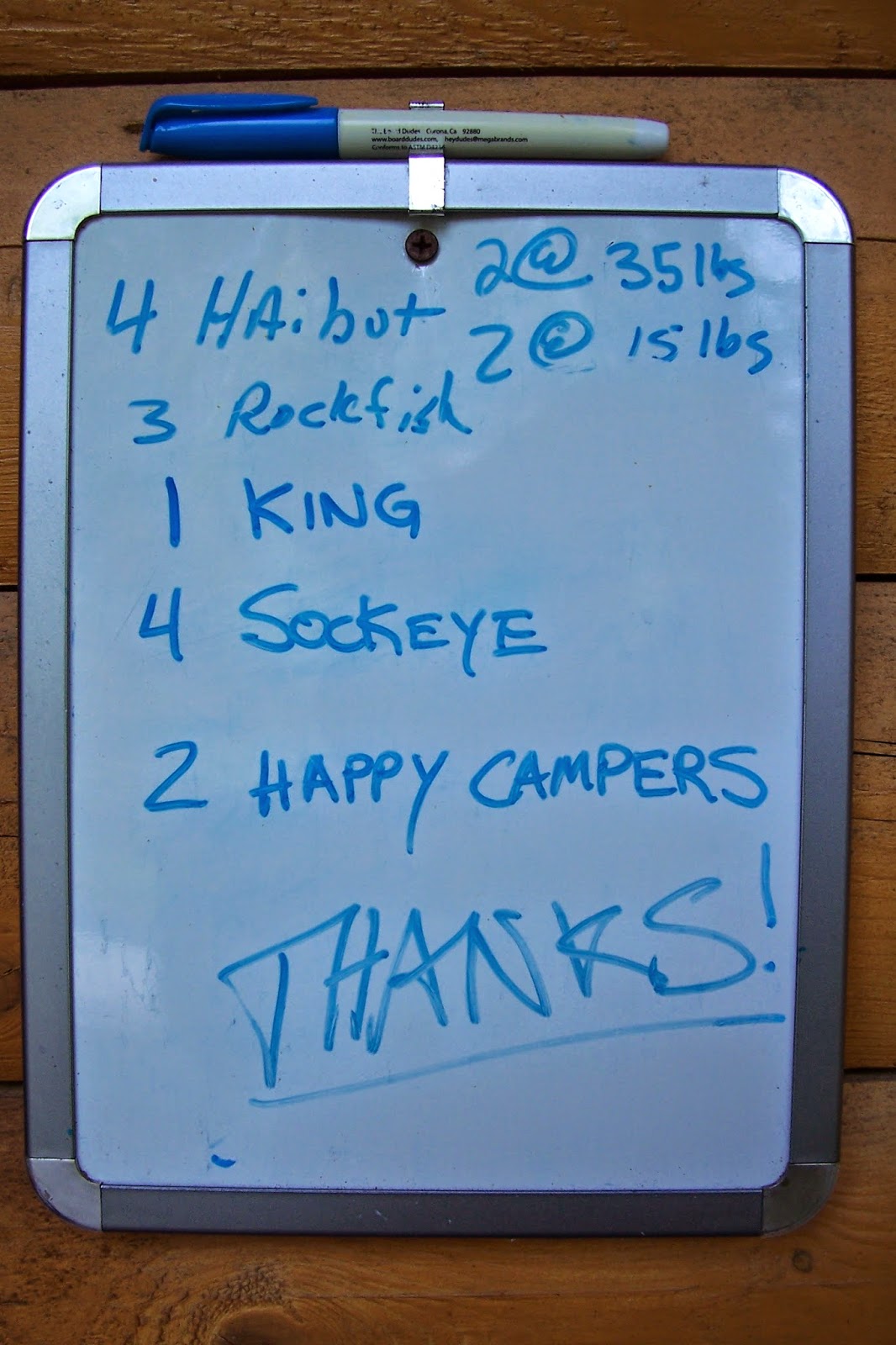 So the second day of the reopener I was rejoined by Chris and Tony.   Great weather, great conversation but the day ended in a shut out.   Not even one drive by bite.   Wish I could say there were fish being caught by the other boats but it looked as if it was just as slow for everyone else.   I was a little worried that Chris and Tony didn't enjoy their time in Alaska but their cabin wipe board told a different story.   The way I look at it, 2 happy campers makes 1 happy guide.   Thanks guys and hope to see you again soon. 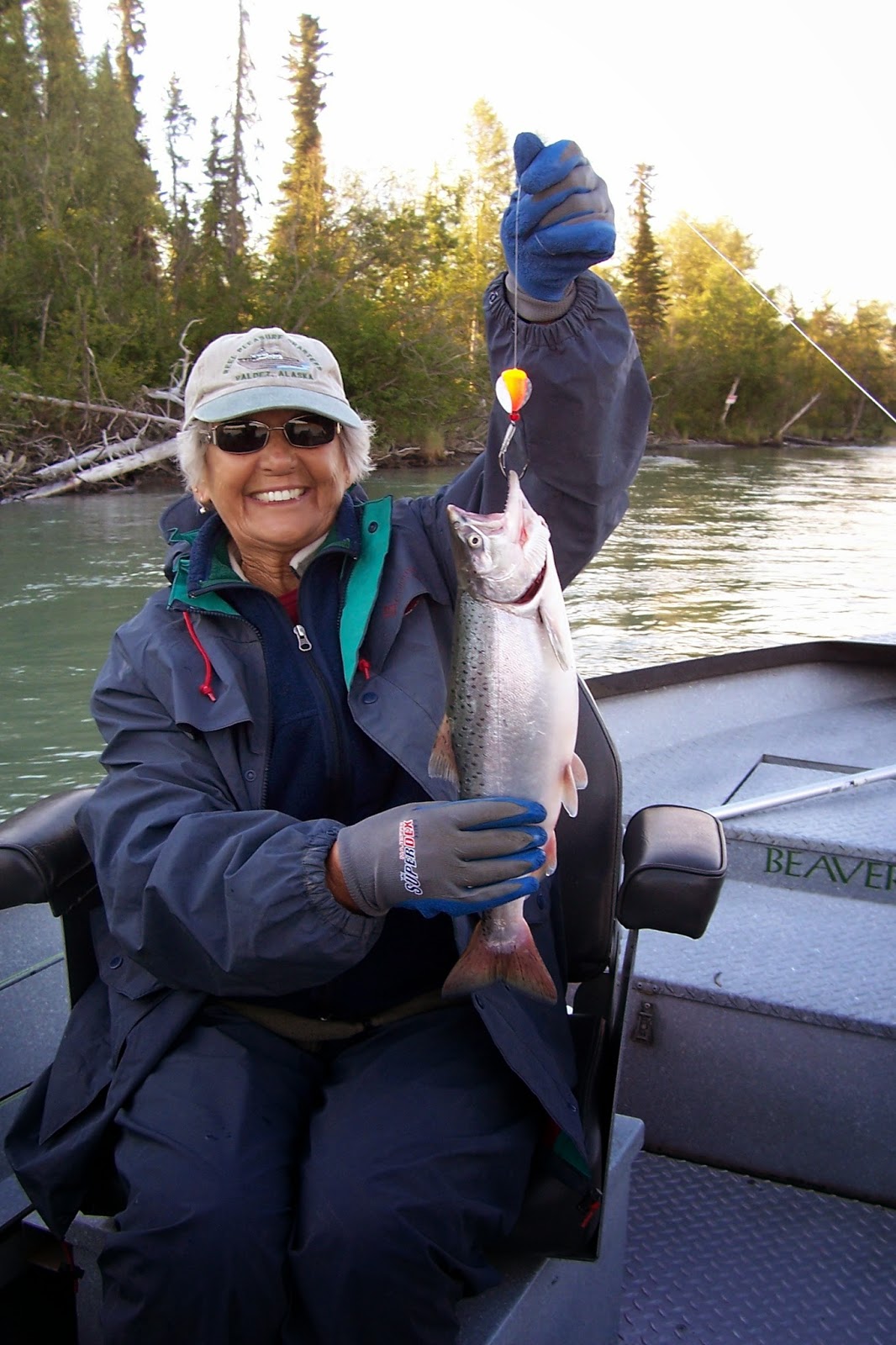 The next two days I didn't have any trips scheduled but the reports I received were more of the same.....slow.    That didn't matter to me on Saturday because Team Laflamme came down to fish and whether it's slow or not the day is always going to be a great one.   Fishing started off with a bang and on our second troll of the day Janet caught a jack salmon.   "No problemo",  I thought, we have the rest of the day to find some more.  Well, the jack was the only fish we found.   In fact, it was the only fish that we saw all day.  Not exactly a stellar end to the first week of July, but everything considered, it was great to be on the water again. 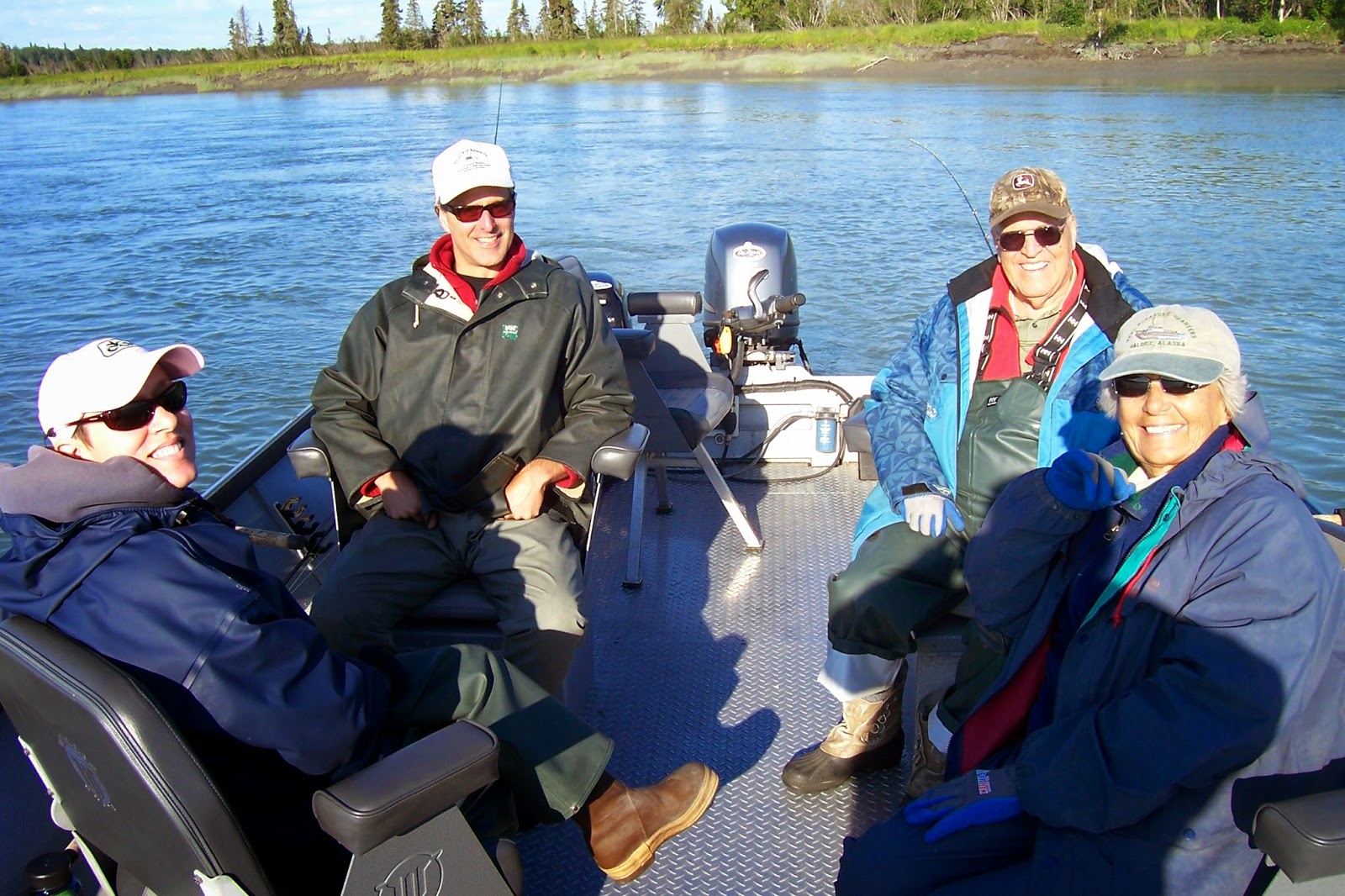 Here's a group photo of Team Laflamme (Todd, Janet, and Bob) and Jane, doing what they do best....enjoying the day. 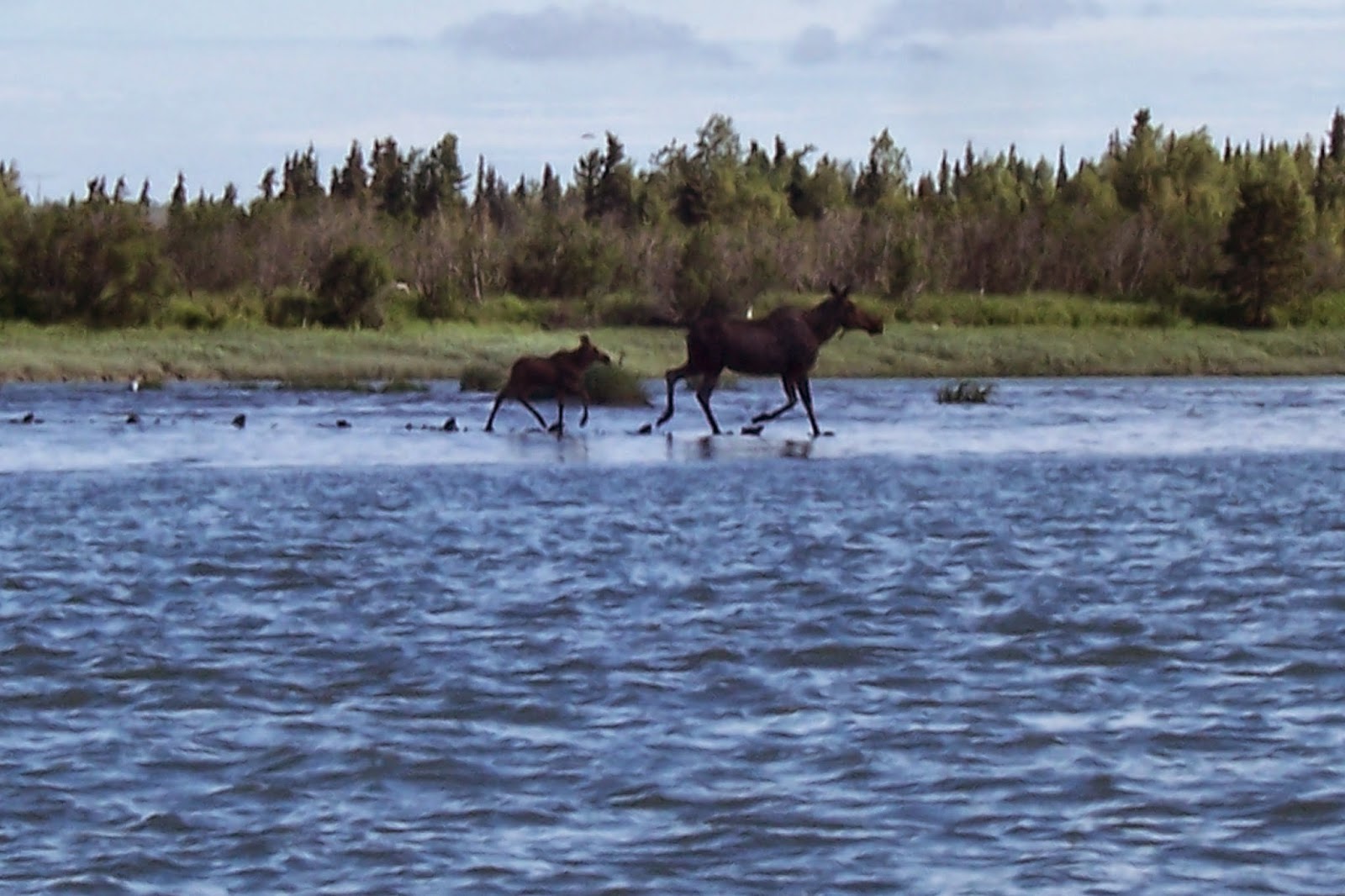 I've always said the Kenai River experience is more than just catching fish.  This was an all star week for wildlife viewing.  Here's a momma moose crossing the river with her calf. 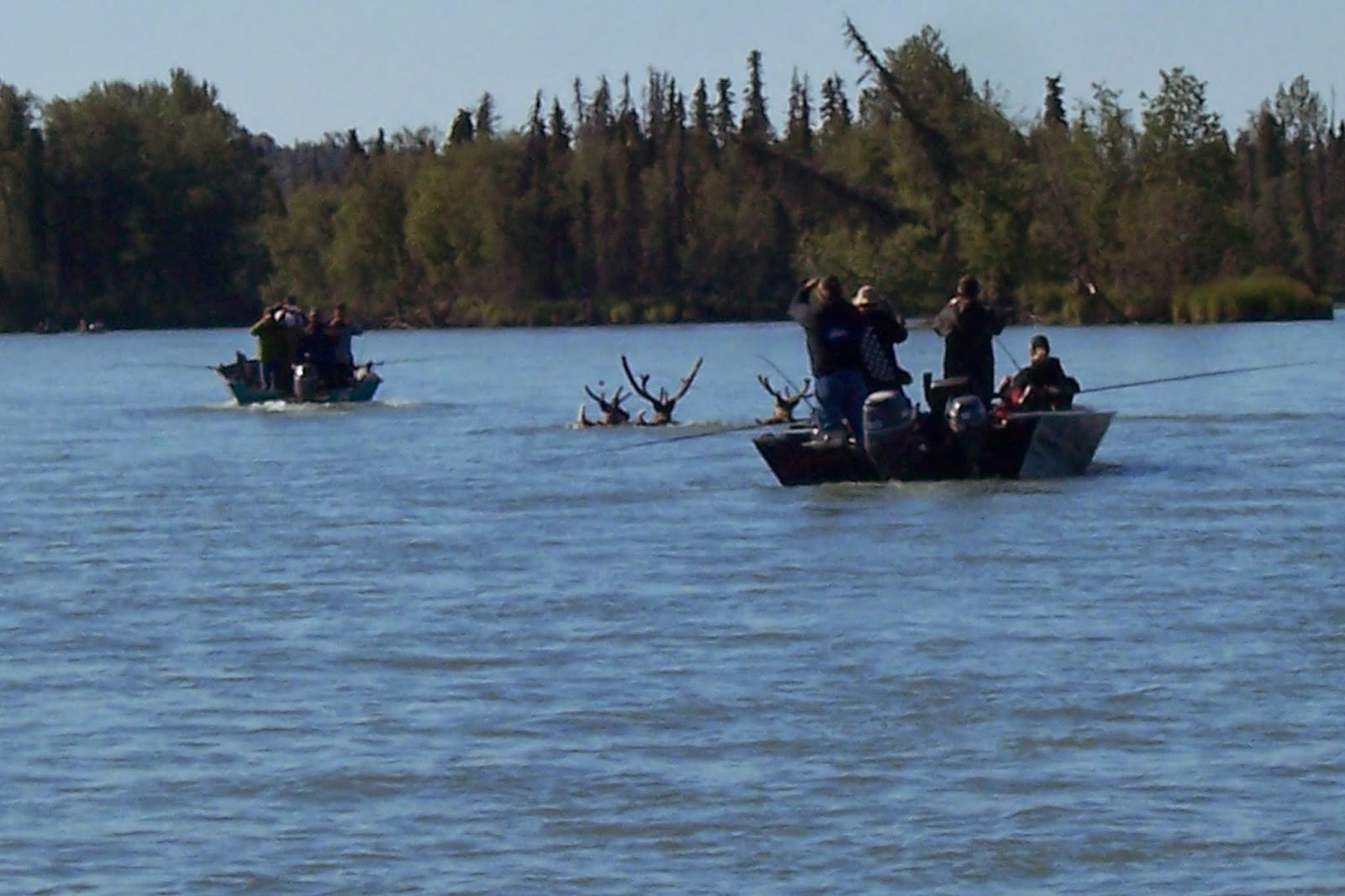 And here's a bull caribou along with two female caribou crossing the river between a couple of boats.

Next week should be a strong indicator of the month to come. Hopefully, the king and red salmon numbers will show daily improvement.   I'll see you next week with a new report.