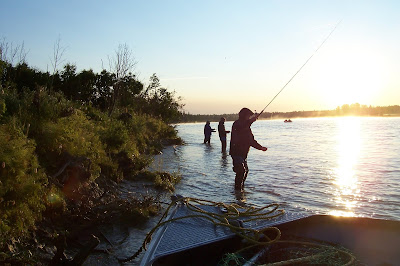 ADF&G has released its 2017 Upper Cook Inlet late run (July) sockeye salmon forecast and if you're a commercial fisherman you hope the same people who came up with these numbers are the same people who forecasted the 2016 presidential election. The total run forecast calls for 4 million sockeye salmon with a commercial harvest of 1.7 million. The commercial harvest is 1.2 million less than the 20 year average harvest. Ouch, definitely a subpar forecast. 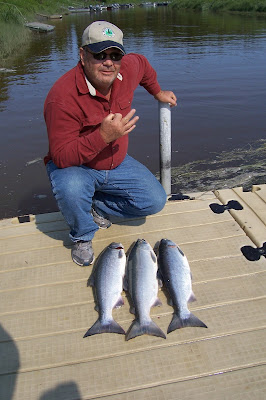 That being said, the Kenai River sockeye salmon optimum escapement goal (OEG) has not changed. ADF&G manages the late run in river goal to fall within 700,000-1,400,000 fish. My forecast is that fishing will be similar to last year. Timing and location will deterermine your success rate. In other words, some fisherman will do fine, others will struggle. That kinda sounds like the text book definition of fishing, doesn't it? 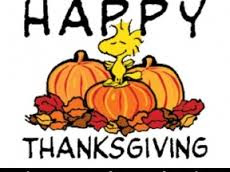 Family, friends, football, and food. It's a good day to count your blessings. 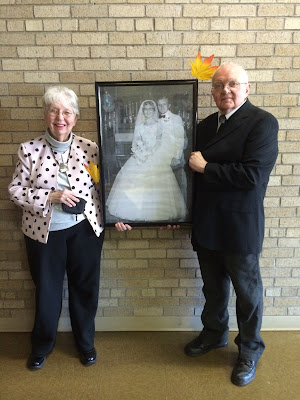 I've had a couple of interesting weeks and it had nothing to do with fishing. I hightailed it down to Minnesota to attend a 60th wedding anniversary celebration for my in-laws, Bill and Evelyn Matthies. Shortly after that, I was off to Las Vegas. 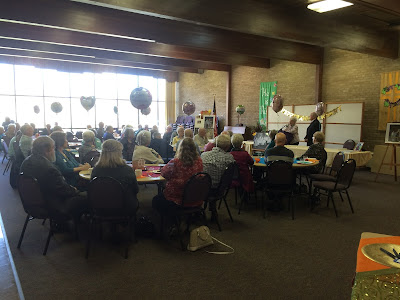 Family and friends were treated to lunch and stories about their 60 years of marriage.  If you wait to the end of this post I'll share with you my favorite story. 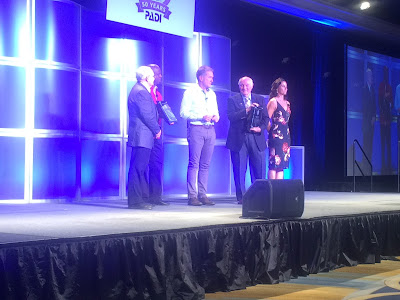 Not long after the anniversary celebration, I had the privelege of travelling with Bill to the Dive Equipment Manufacture Association (DEMA) convention in Las Vegas. He was being honored by the Professional Association of Dive Instructors (PADI) as the oldest, active dive instructor in the world. You read that right, THE WORLD. 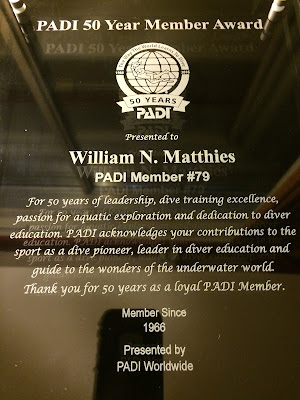 Over the course of a couple of days I was amazed how many complete strangers would walk up to Bill and thank him for being a pioneer in the dive world. Heck, even one group of divers from Texas bought his (our) dinner. He took this award and the accolades in stride and would respond to people by saying he hasn't done anything special, he's just old. Well, after listening to what others had to say, it's much, much, more than that. A side note, thank you Theresa Kaplan, Christine Grange, and Drew Richardson from PADI for making this all happen. From the award to the accomodations, it was an experience that neither of us will forget.

So, the 60th wedding anniversary and the PADI award are tied together by a story Bill likes to tell. I'm not doing justice to the way he tells it, but here it goes.

In his early years, Bill was working as a lifeguard and a man from Hawaii asked if he could use the pool to try out scuba gear. Bill said he could but he had to try it as well. He was instantly hooked and decided right there he wanted to buy gear.

Trying to figure out a way to pay for the gear, Bill stopped at a bank to see if he could borrow money to purchase the equipment. They said yes.

Bill went home and told Evelyn about what had happened and what his plans were. She said, "we're in college, we have a baby, we live in a small trailer, we eat spaghetti every night and we can't afford it. If you're that selfish and want to buy scuba gear, I will leave you." Bill said, "go ahead."

Evelyn said, "we have no room to store the equipment, where will you keep it?"

Bill finishes the story by saying he couldn't have had a better partner in life. She has supported him all the way.

That, my friends, is an enduring story of love and I couldn't be more proud to be their son-in-law.

2016 was quite the year for the Kenai pink salmon. Although the total size of the run was below average, the size of the fish were HUGE. So big that in one day the state record that stood for 42 years was broken twice. The new state record is 13 pounds, 10.6 ounces. This broke the old record by more than a pound. Just to give a little perspective, ADFG has a trophy fish program and the minimum weight to qualify a pink salmon is 8 pounds.

The story goes that on August 22nd a gentleman caught a large pink salmon and brought it to the ADFG office to have it certified as a trophy. Lo and behold he found out it broke the state record that that was set in 1974. A few hours later, another gentleman brought a pink salmon into ADFG to have it officially weighed. He was told he broke the record that was broken that very morning. Crazy.


So, why the run of big fish? The only theory that I heard that makes sense came from my friend Francis. He said less fish, more pasture. This theory is definitely supported by the fact that the commercial fishing industry harvested 197 million pink salmon in 2015, and only 40 plus million this year.

The funny thing about 2016 is I spoke to quite a few fisherman/guides that all swore they caught or saw a pink larger than the new state record. Maybe, maybe not because none of these fish were officially weighed. But, I have no doubt that lots of huge pinks were swimming in the river this year.

Can't wait for 2018 to come to see if this is a new trend or just a one time anomaly. 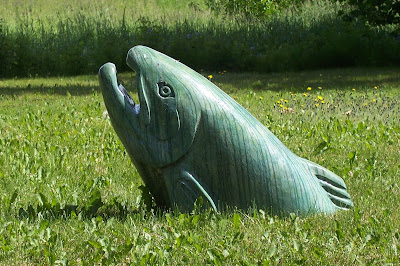 A couple of years ago a business popped up on KBeach Road in Soldotna selling cement salmon head lawn ornaments. I liked the look of the work but never bothered to stop in to talk to the owner. This spring that changed when two of my neighbor's purchased the piece of art. You know how it goes, since they had 'em, I had to have one too. 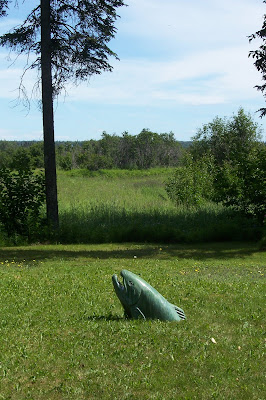 There were several spots I wanted to place the salmon head. I ultimately decided to put it smack dab in the middle of the yard. I think it was a good choice based on the conversations I had this summer with our cabin guests.

What do you think? Update to the original post....I received this photo from my good friend George. This is his grandson Riley. George said, "this is what you do with the monument after you catch a 60+pounder."
Thanks George, for sharing your photo.