Last weekend Big Will invited Jane, Todd Laflamme, and me out for an afternoon of halibut fishing. 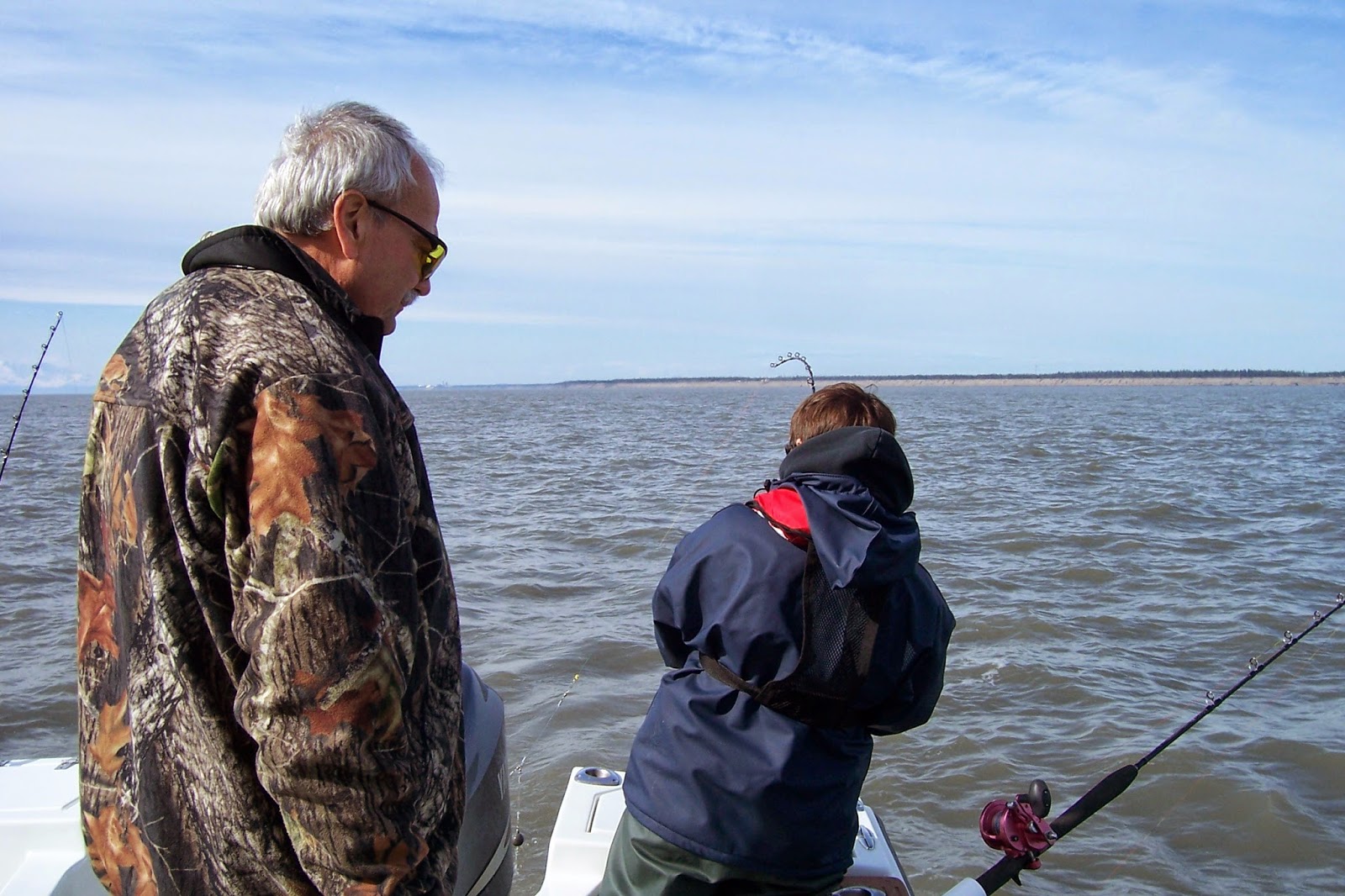 After a quick ride out it didn't take Jane long to hook into the first fish. 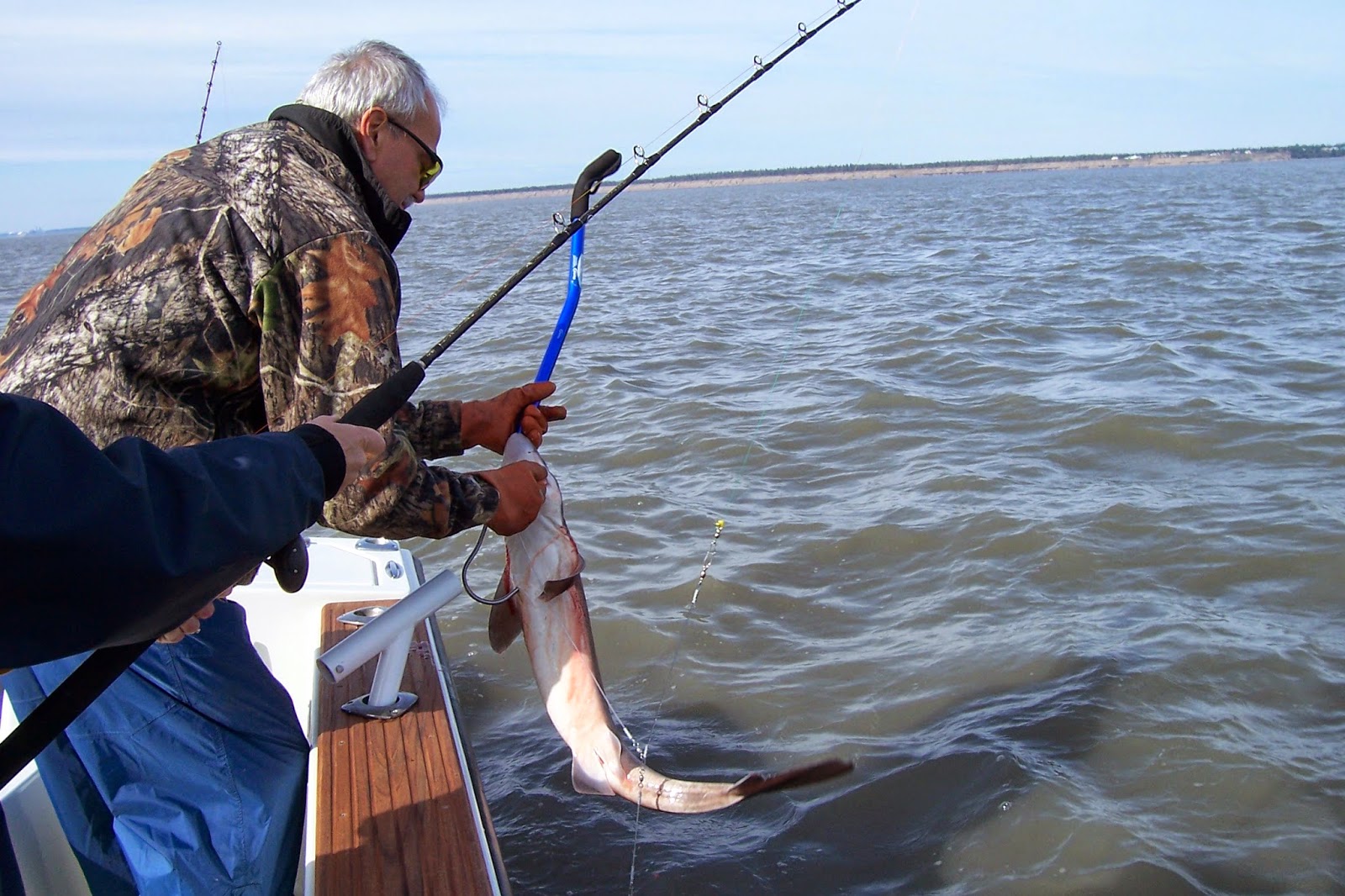 Unfortunately, it wasn't the species we were targeting.  It was a spiny dogfish shark. 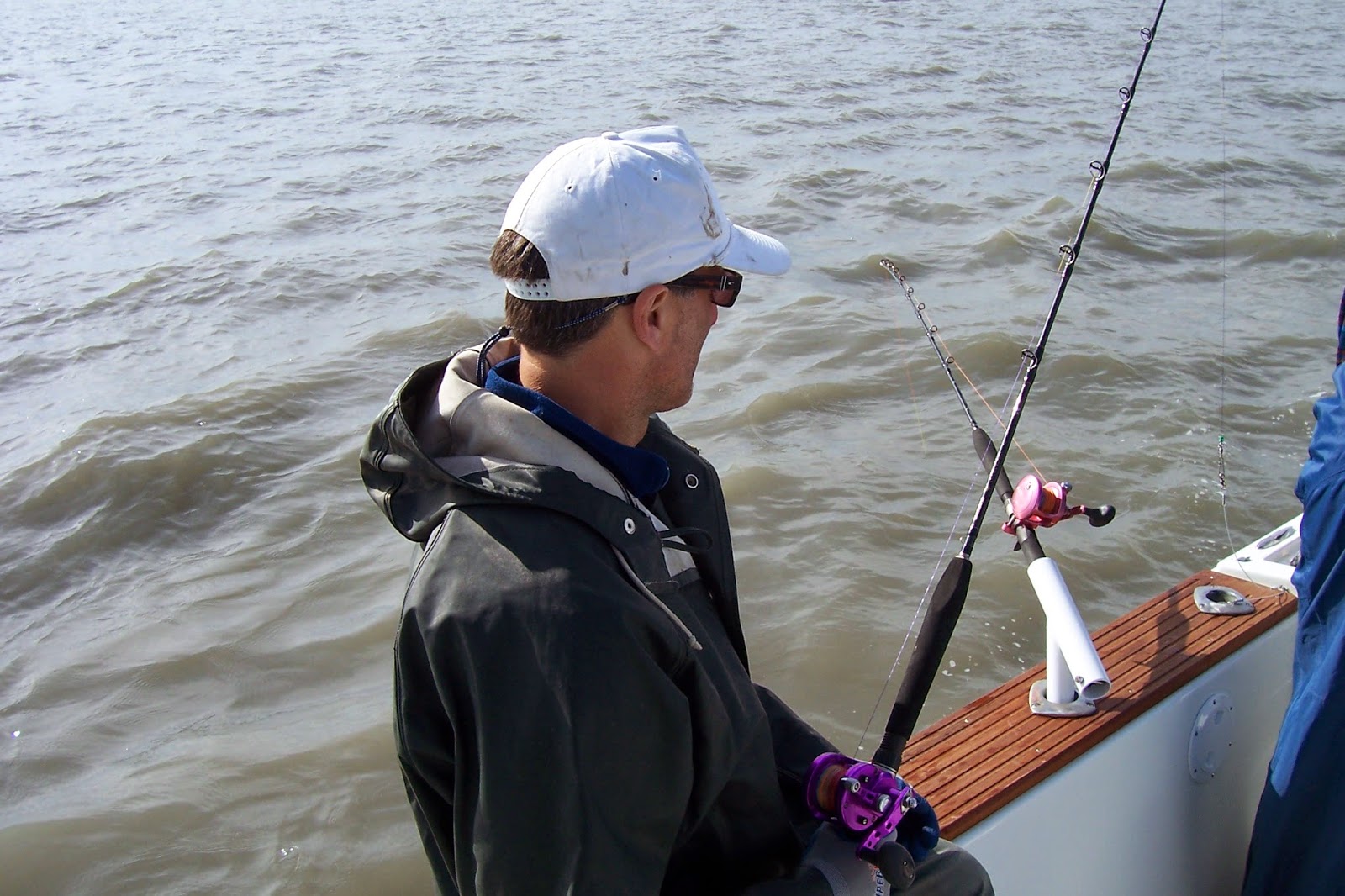 Here's Todd patiently waiting for the next bite.

We ended up catching five fish but they all ended up being shark.   It was great to be out in the great outdoors and the day reminded me of the sign Big Will has in his shop, "The Least Important Part of Fishing is Fishing." 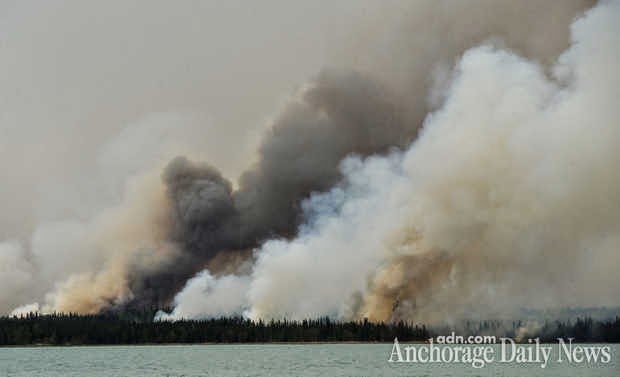 The rest of this post has to do with the Funny River Horse Trail fire that is raging nearby.   I had a couple of great photos taken on our dock of the smoke plume but unfortunately I wasn't able to load them. So, credit should be given to the Anchorage Daily News for the use of the photo above.

The national media has been doing live remotes for a 4500 acre fire near Sedona, Arizona while over 100,000 acres burns in our backyard. With only 15% of the fire being contained, a lot more acreage will be consumed in the near future.

The map above shows the area that has burned.  It basically covers an area from near the Kenai River banks all the way to Tustumena Lake. The good thing about this fire, and perhaps why there is little national media attention, is it's in a wildlife refuge with very little structures affected.  However, a shift in wind direction and wind speed will prompt a major evacuation for several nearby towns.  Let's hope the rain that is forecasted this week materializes. For ongoing updates on the fire, please check the comments section.

Tomorrow is Memorial Day.  Take a moment to think about our military history and the people who have served this nation so well.

I'm writing about this event now because I'll be too busy fishing on the actual day of this legendary anniversary.  25 years ago, a Minnesota man set a Guinness World Record for the longest fight of a fish, WITHOUT landing the fish.   If you click here you'll be able to read the whole story.

For those of you who didn't click on the link, here's a quick summary. On July 12th, 1989, Bob Ploeger hooked a king salmon on the Kenai River which turned into an epic 37.5 hour fight.   Eventually, the king salmon dubbed "Boss Hog", won the battle. Ploeger's fight shattered the previous Guinness record by more than five hours.  To the best of my knowledge the record still stands.


Posted by Beaver Creek Cabins & Guide Service at 6:39 AM 2 comments:


In the beginning of the week I suffered an injury that prevented me from floating the Kenai in my cataraft.  If I played in the NHL my injury would be described as "an upper body injury".   Anyway, I was disappointed that I wouldn't be one of the first to float the river in search of treasures lost.  The best stuff is always found if, 1) you're the first, or 2) the river is low and clear. Lo and behold my phone rings and Jeff King said he put his boat in and was wondering if I wanted to go on the hunt with him.    He didn't have to ask me twice. We went out for about an hour and because of the low water levels we were limited to a search area near his boat launch.   We did find a few small treasures; a floating dock section and a couple of lures, but no Holy Grail (anchor). All in all, not a bad day. 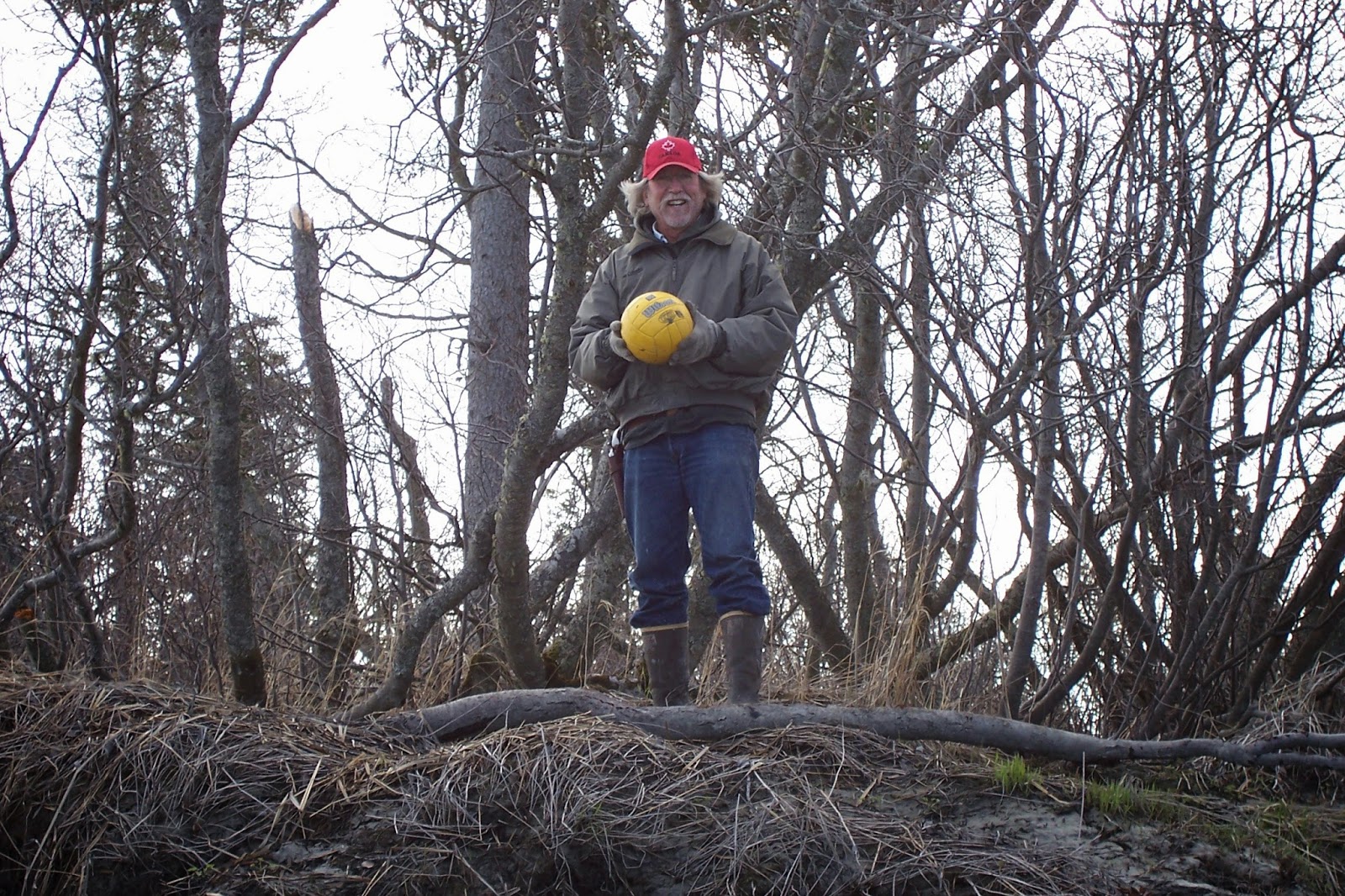 Later in the week Jeff called again and said the tide was right to run down the river to search the "good spots". There was no way I was going to pass up on this opportunity.  The first place we checked Jeff found a split ring, needle nose plier and I found a fillet knife.  Not bad, but we checked a very long gravel bar and that was it.  Next, we headed down the river a little further and found a nice kwikfish and a Wilson volleyball.   Things were starting to pick up. 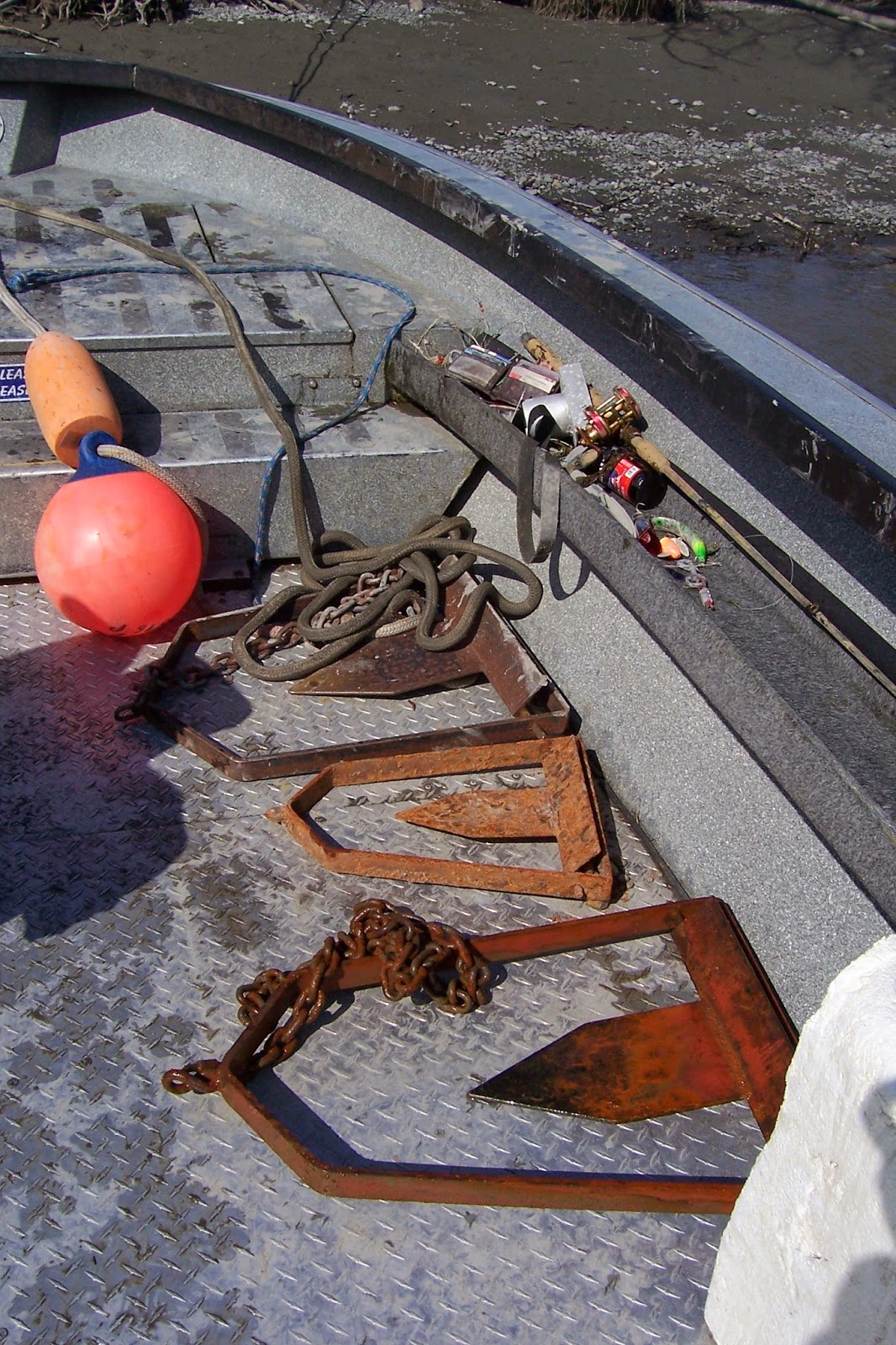 The next spot we hit Jeff said we're going to find an anchor here.   Who am I to second guess the founder of Kenai River salvaging?  I start walking the gravel bar and found several spinner baits.  Hey, I'm on a roll in this friendly competition.  Next thing I know Jeff finds a fishing rod.  Nuts. He definitely took a lead in the game. When he picked up the rod, buried in the gravel right behind me, Jeff spots an anchor. Really?   At this point we decided to split up and I walked down river while Jeff chose to go up river. He was about 50 yards away from where he found the anchor and yells at me "I found a wallet!"   Holy cow, this could possibly be the best find ever.  Game, set. match for Jeff. 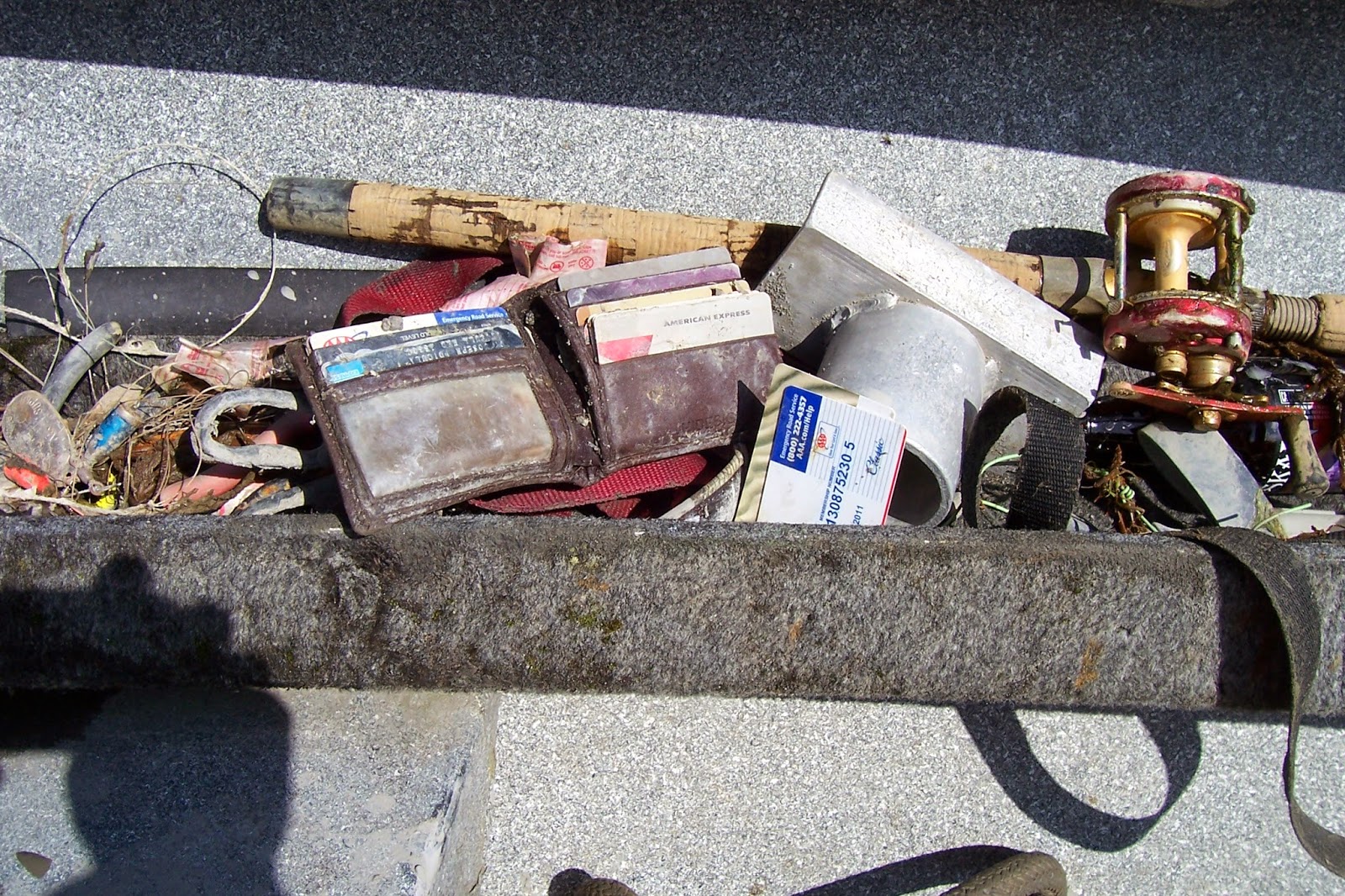 In the middle of this photo you'll see the wallet.   Most of the credit cards expired in 2012 so I'm thinking this had been sitting in the river for at least two years.   Much to our surprise there was no money in the wallet.   Who travels to Alaska with no money in their wallet?   Or, maybe this was the end of his trip and he ran out of money? Who knows.

So a good story teller would end this adventure with finding a lost wallet.   But, me, "Grasshopper" to Jeff's "Master", did find a nice anchor near the end of the day.....I'm still a walked player!   No doubt the 2014 salvage run was definitely one to be remembered.

So, with my recent "upper body injury" it got me to thinking about when my mom took care of me when I broke my arm in high school.   It was a tough six weeks and it was a job only a mother could do. Thanks, mom for your care, and have a Happy Mother's Day.


Posted by Beaver Creek Cabins & Guide Service at 11:12 AM 4 comments: 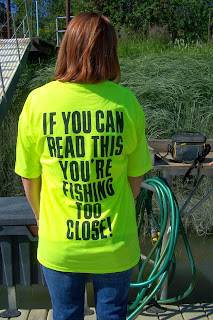 In just over a month the first run of red salmon will be hitting the Russian River/Kenai River confluence.   If you've never experienced this fishery perhaps the kindest word to describe it is "social."

In 2013, one half of one my favorite fishing couples, Holly Taylor (Eric is the other half), showed up with this t-shirt.   Believe it or not, she said she purchased it in Utah.   Anyway, Holly has one of those personalities that you instantly like and no doubt it's demonstrated by the fact that she chose to wear a shirt like this amongst hundreds of bank fisherman. What she did was publicly display what so many people privately believe but she did so in such a disarming way.  She is definitely unique and a trendsetter for the ages.

.
Posted by Beaver Creek Cabins & Guide Service at 11:05 AM No comments: