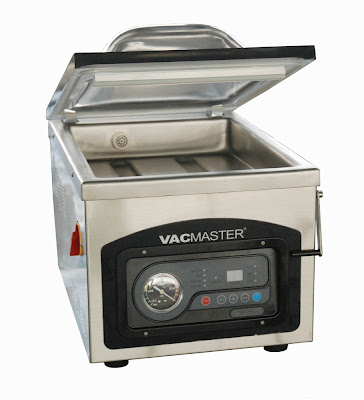 A new alternative for all our guests.

A service that I provide is cleaning your fish. After that, it's always been the clients decision of what to do next. Long time clients know what to do, but new clients always ask, "what do I do now?" My stock answer is to take the filets to Custom Seafood Processors (10 minutes away) and they'll vac, freeze, package, and ship your fish for you. The biggest reason I refer clients to Custom Seafood Processor is that Jane and I simply do not have the time to help people process their fish.

Dave, a Kenai River regular, has a tremendous mind for business and made the suggestion that we should provide a commercial grade vacuum sealer for our clients to use and we should sell the bags at a nominal fee. As the two gentleman would say in the Guiness commercials.......BRILLIANT!

Are we looking to replace Custom Seafood Processor or anyone else that processes fish? Nope. We're just providing an alternative to people who would like to take care of their fish themselves and do so in a professional manor.

The plan this year is to set up a processing station in the shed that houses our chest freezers. Jane and I are excited to make this available for your use in 2012! 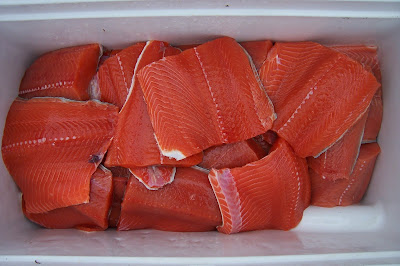 Posted by Beaver Creek Cabins & Guide Service at 6:41 AM 4 comments:

Swans on the Kenai Peninsula 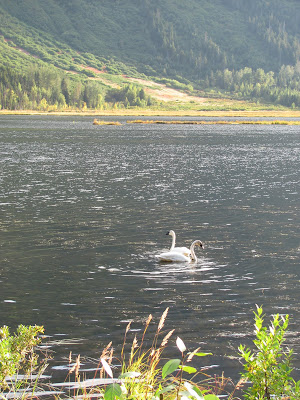 If you are a birder, there's no doubt the Kenai Peninsula is great place to be. There's quite a range of migratory birds and the largest of them all is the swan. There are three types of swans in the world: trumpeter, tundra, and whooper. The most common, and what you'll find on the peninsula, are trumpeter swans. Although the population is healthy today this has not always been the case. In the early 1900's trumpeter swans were nearly extinct. In 1932 there were only 69 wild trumpeters in the world. Today, through protective measures, there are over 13,000 swans and 80%-85% of them are in Alaska. 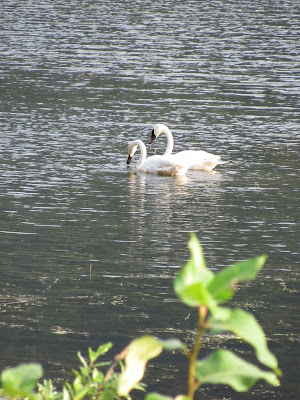 Swans pair with mates for life. Females will lay 2 to 7 eggs and as adults a male will weigh up to 28lbs and a female up to 22lbs. 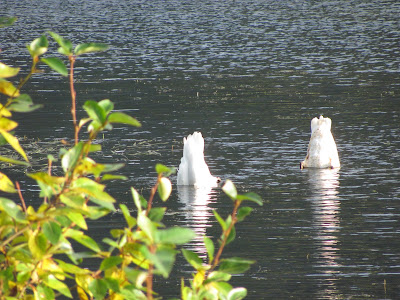 In the fall swans leave their breeding grounds in Alaska and migrate to the western coasts of Canada. After a winter of feeding and growing they will make their return in the spring. 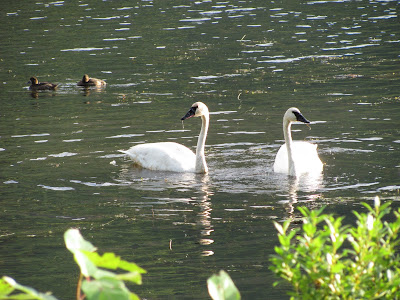 On your drive from Anchorage to Kenai make sure to keep your camera ready. Great viewing places for trumpeter swans are at Potter's Marsh on the Seward Highway (just outside of Anchorage), and Tern Lake at the junction of the Seward Highway and Sterling Highway. Once you're in Kenai an accessible place for swan viewing is at the mouth of the Kenai River along the Bridge Access road.
Posted by Beaver Creek Cabins & Guide Service at 4:23 AM 1 comment: 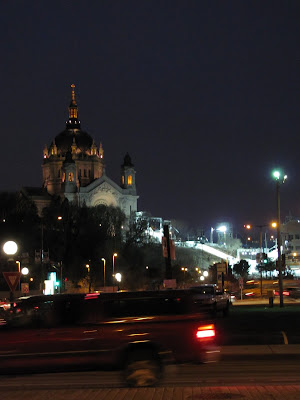 Jane and I just wrapped up our first sport show of the winter in St. Paul, Minnesota. It was a busy weekend, but not just for the sport show. On Saturday the expected attendance for the sport show was 10,000, followed by 15,000 for the Brad Paisley concert, and a whopping 80,000 for the Red Bull Crashed Ice World Championship. All of these events occurred in a five block area. I took the photo above walking out of the River Centre (where the sport show was held) looking up at Cathedral of St. Paul with the Crashed Ice course in the foreground. 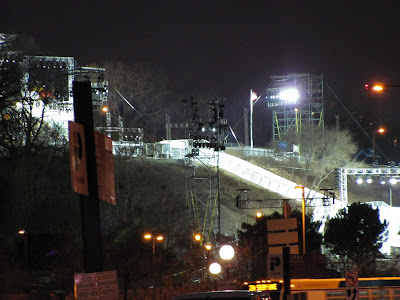 Here's another shot of the quarter mile course. 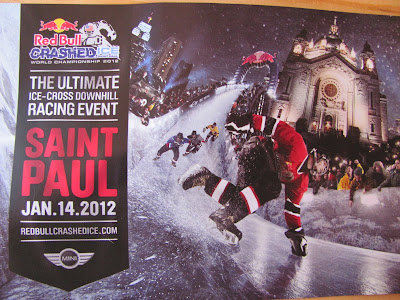 Finally, a shot of the poster advertising the event. As you can see, the Crashed Ice event is a combination of motocross racing and downhill skiing done on hockey skates. This is the first time this event has been held in the United States. Kind of appropriate since Minnesota calls itself "the State of Hockey". 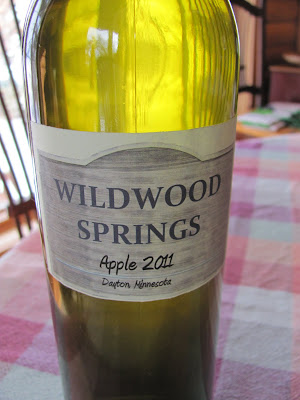 Doing this sport show is always fun. We get to meet people interested in Alaska and we get to visit with a lot of old friends. It was great to have our annual lunch with Peter and we're always thankful for his help at the booth. Also, the last couple of years we've made it a point to go out after the show with Dave, Lory, Al and Fred. We find it more enjoyable to visit with these guys at a restaurant than at our booth. So, Dave and Lory, as if they don't have enough hobbies already, decided to become wine makers and be the next Ernest and Julio of Dayton, Minnesota. We are the lucky recipient of their product (photo above).

The booth has been stored temporarily until our next show in February. Looking forward to seeing more friends at that show as well. Until then....
Posted by Beaver Creek Cabins & Guide Service at 8:29 AM 2 comments: 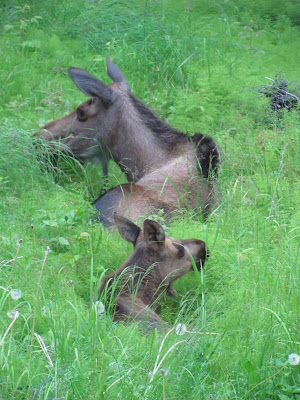 I just watched an hour long program on the National Geographic channel called "Moose: Titans of the North." It mostly dealt with moose in Denali Park and the urban moose in Anchorage. It was informative and the filmography was second to none. 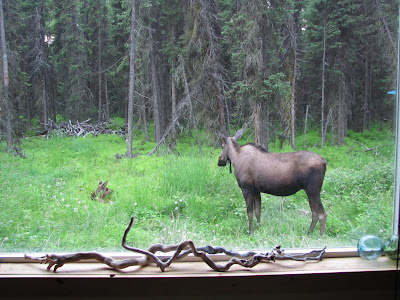 I started thinking about the moose we find on the Peninsula and there's no doubt we have both urban moose and the backcountry moose like the one's found in Denali park. The difference? Generations of urban moose have lived and survived around people and buildings. They can be dangerous, after all they are a wild animal but overall show great tolerance for people, pets, and vehicles. This is just the opposite for moose that are in the bush. They are skittish, often hard to find, and are more protective of their territory. 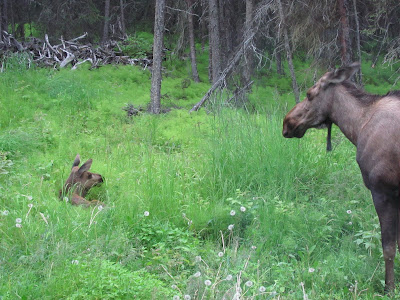 All the photos above were taken from the window of our cabin...definitely urban moose. You don't ever want to startle a moose, especially a mother and her calf, and this is good reason why you need to be aware of your surroundings when you walk out the door. Credits go to Jane for capturing these "ahhhh, fer cute" moments.

Posted by Beaver Creek Cabins & Guide Service at 4:41 AM 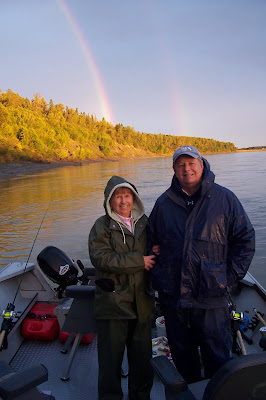 If you've been following this blog since the beginning then you know Dan and Mary Meyer very well. We're coming up on our 1oth season of owning Beaver Creek Cabins & Guide Service and they have been with each of the ten seasons and sometimes even twice a season. 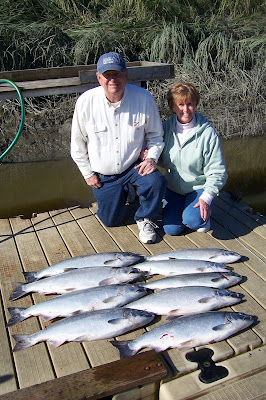 Dan and Mary live in Peoria, Illinois. After meeting them for the first time I could tell that Alaska was more than just a trip on their "bucket list." It started out as an anniversary, trip of a lifetime gift to themselves and quickly turned into an every year trip. Through the years not only did they fish and sightsee when they were in Alaska but they became interested in real estate. This past fall they finally pulled the trigger and bought property about a half a mile away from our cabins. So, not only have they become good friends, Jane and I can officially call them our neighbors. 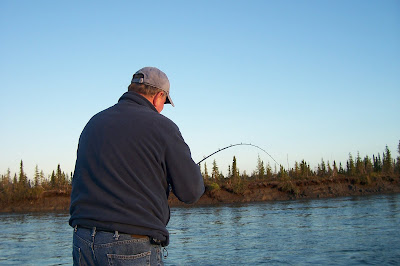 One of our highlights of 2011 is pictured above. Dan is fighting the largest king salmon he's ever caught. There are no photos of him holding the fish because it was caught after the king salmon season closed and by law the fish could not be removed from the water. The smile on Dan's face was permanently etched for days. I'm glad Mary, Jane, and I were there to share in his excitement. 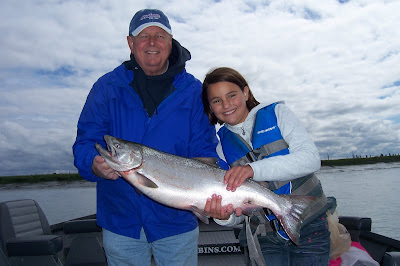 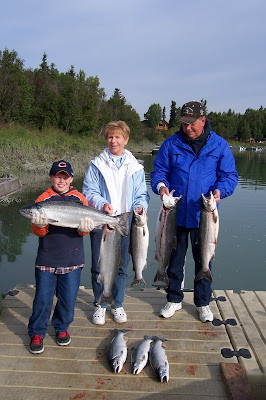 One thing that is real evident with these two is they love their family. From their daughters, son in laws, to their grandchildren, you can tell their very proud of them. Everyone would love to have them as grandparents and here is one of the many reasons why. When each of their grandchildren turns 1o years old, grandma and papa bring them up on their own trip to Alaska. How cool is that? Pictured above is Caroline and Alec posing proudly with their Kenai catch. Lucky for us they have more grandchildren which should keep us busy for another ten years (you're next, Ellie). 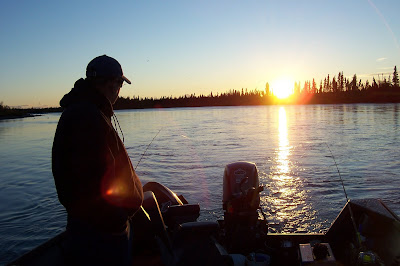 Dan is one of the most obervant fisherman that I've had in my boat. You can see him above intensely staring down the rod tips looking for a bite. He's pretty good at it. However, there's always a moment in every trip when Dan will let his guard down and be looking away and a fish will hit. "Dan, Dan....fish on!" I think he feels like he's failed because he wasn't watching the rod when the fish bit. Oh, we often catch that fish, but I think Dan feels like he let me or the boat down because he wasn't "on it". It makes me smile thinking about how many times this has happened and how bad Dan feels. Hey, Dan, it's all good. 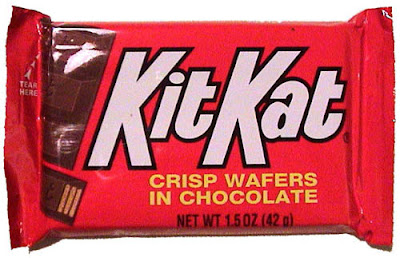 Fisherman are superstitious by nature and Mary is the queen on my boat. She has two fail safe truisms when it comes to catching fish. The first one is that fish will bite when a passing boat wake will rock our boat. Can't argue with that because we certainly have caught a bunch of fish when this has happened. I think it has to do with the the lures going side to side which entices a fish to bite. Not so sure about her second superstition and why it works. Mary is firm believer that eating a Kit Kat bar will trigger a bite. Mary is selfless person and will bring in the boat enough Kit Kat bars to make sure the entire boat will limit out. I think the key to the Kit Kat bar luck is you can only eat one when there hasn't been a bite for awhile. You just can't eat and eat them all day long. It's hard to argue with success of the Kit Kat bar and neither will my waistline:)

Dan and Mary......Jane and I feel very fortunate that you are more than just customers. We value your friendship and look forward to sharing your company.....even if you're Bear fans! See you soon.
Posted by Beaver Creek Cabins & Guide Service at 9:00 AM 2 comments: