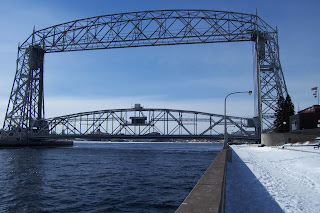 I'm often asked why do we do so many sport shows in Minnesota.    From a business standpoint it makes perfect sense;  the highest per capita fishing licenses sold in the United States are in Minnesota.  In other words, "we're fishing where the fish are."   But, there other reasons why we love to come to Minnesota:   1)  the beauty of the state, 2) it is where we grew up, and 3) it is where our families live today.

Of all the shows we do, the Duluth/Lake Superior area definitely needs a little more attention on this blog.  It's also because I took a lot of photos and this is the best place to share them.   Anyway, here's a little historical background on the area. Duluth is the 4th largest city in Minnesota with a population of 86,265.  It's claim to fame is that it is the largest and farthest inland freshwater seaport in North America (2300 miles from the Atlantic Ocean). The main exports transported out of Duluth include coal, iron ore, and grain.  Other little tidbits to know about Duluth is that it's affectionately called "the San Francisco of the Midwest" and "the Air Conditioned City". 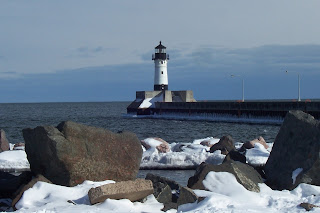 lighthouse near Canal Park
Lake Superior is the largest of the Great Lakes, and is considered the largest freshwater lake in the world.  The Ojibwe call it "Gichigami", or, as Gordon Lightfoot called it in his 1976 hit song, The Wreck of the Edmund Fitzgerald,  "Gitche Gumee".    No matter how you spell it still means "big water." 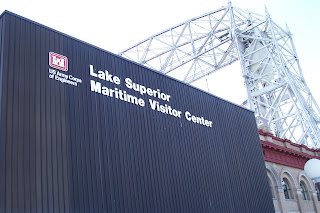 An area that I really enjoy is Canal Park.   It's located at the harbor entrance of Duluth/Superior.  One of the many attractions in Canal Park is the Lake Superior Maritime Visitor Center which is operated by the US Army Corp of Engineers.   If you like maritime history, and who doesn't,  this is the place you'll want to visit. 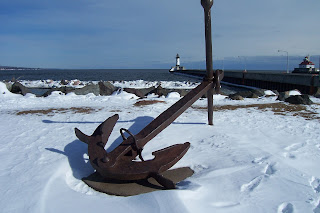 Just outside the entrance to the Lake Superior Maritime Visitor Center there's a self-guided, walking tour of shipwreck recoveries from the lake.   When we came upon this anchor Jane said, "hey, my dad recovered that anchor!"   Pretty neat that my father-in-law, and diver extraordinaire, Bill Matthies, plays a part in the history of Lake Superior.   Since 1959 he's been a diver and has explored and documented many shipwrecks throughout the lake.   Because of his efforts, in 2011, he was given the Diving Community Contribution Award by the Great Lakes Preservation Society. 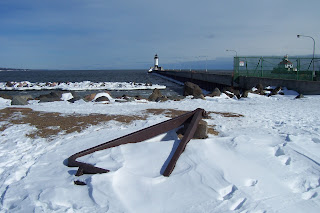 I'm not sure what this is but I think it's a shackle from an anchor.  I took this photo because it looked like a really large RL Kenai River anchor.   As a perspective, this chunk of iron is about as long as my river boat. 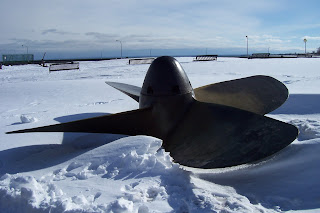 Here's a propellar from who knows how big of ship. 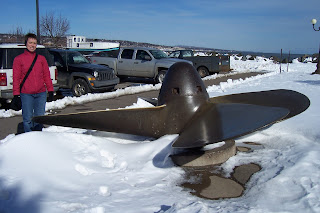 Here's another one.  Since Jane is in this photo you'll get a better idea of it's size. 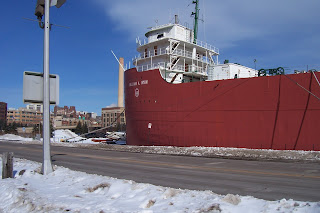 ﻿
﻿
Right alongside the Duluth Entertainment and Convention Center (DECC) in Canal Park, the SS William A. Irvin is moored.   It is 610 feet long with a beam of 60 feet.   To give you an idea of the size, it would be at least 5 times the length of many of the crab boats featured on the television show, Deadliest Catch.  The SS William A. Irvin is owned by US Steel and was retired from it's lake fleet in 1978.   It is now on the  U.S. National Registry of Historic Places and is currently open daily for tours.   ﻿
﻿ 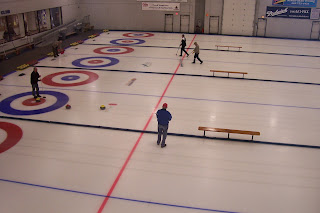 Thought I'd include this photo.  Everyday during the sport show we had to walk from our hotel room through the skywalks to the DECC.  Adjacent to the DECC is the Duluth Curling Club.   This club was first organized in 1891 and moved into this building in 1976.  It is the largest curling facility in the United States and trust me, they are serious about their sport.   In the last winter Olympics the Duluth Curling Club represented Team USA. 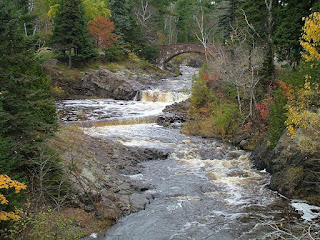 Okay, I lied.  I may have taken a lot of photos during the sport show, but this obviously was not one of them.    The Lester River is a tributary of Lake Superior and it's located just north of town (thank you wikipedia for the use of a summer photo). 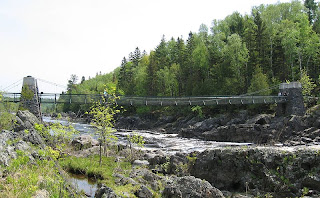 Jay Cooke State Park
Neither was this photo (thanks again wikipedia).   Jay Cooke State Park is located 10 miles south of Duluth.   It's the starting point for the Willard Munger State Trail.   You can bike, hike, in line skate, ride horse, and snowmobile on this trail.
Additional things to explore in Duluth and the surrounding area include:


Hope you enjoyed my little tour of Duluth.  It was a great sport show and it was nice to get reacquainted with an area that both Jane and I spent so much time in as kids.    Jane pretty well summed it up.  As we were leaving she said, "I could live here."   You know what, so could I.
.
﻿
﻿
Posted by Beaver Creek Cabins & Guide Service at 8:43 AM 1 comment: 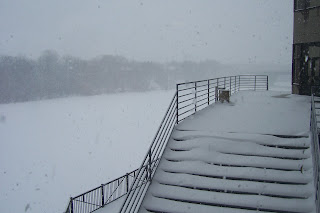 A picture is worth a thousand words, so they say.   This photo sums up the St. Cloud Sportsman Show.   Do you notice the steps leading up to one of the entrances of the auditorium?   Yup, no tracks in the snow (btw, that's the Mississippi River in the photo).   No doubt, the weather influenced the attendance this year.   The good news for us is that the people who did come to the show were definitely committed to researching and exploring new vacation destinations.   That being said, I'm glad we had the opportunities to talk all things Alaska with them. 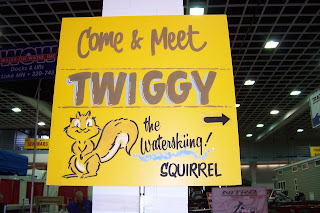 Besides spending time with our friends, Dick and Kim Miller, the highlight of the show was the return of Twiggy the Waterskiing Squirrel.   Twiggy is always a hit with kids and big kids like me. 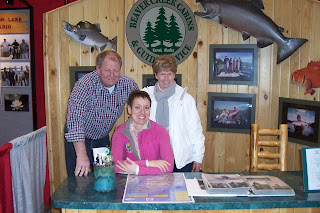 After the St. Cloud show ended we packed up our booth and headed north to the Duluth Sportsmens show.  This was the first time we've been at this show and we were definitely pleased with the venue and the overall attendance.   You'll probably recognize Dan and Mary Meyer in the photo above.   They drove all the way from Peoria, Illinois to spend the weekend with us.   Of all the shows that we've done and that they've come to, Duluth is by far the nicest setting.   Maybe it's because the North Shore of Lake Superior looks a lot like places in Alaska.   Anyway, can't say enough about these two for helping us at the show. 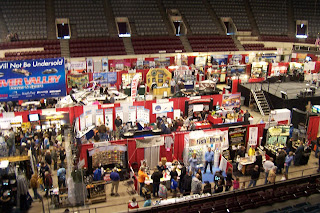 Thought I'd include this photo of the main floor of the Duluth sport show.   Besides this there are two other similarly sized arenas that displayed boats, campers, and rv's.   We liked the placement of our booth (wood booth right in the middle of this photo) but not so crazy about the show stage that was set up to the right of it (elevated black platform).   Twice a day The Roy's performed bluegrass music for an hour and when the music started the lights in the arena were turned off.  Oh well, it gave us an opportunity to walk around the other areas of the show and get a quick bite to eat.

So that's it for the sport shows this year.   We'd like to thank everyone who stopped by to talk about Alaska and to listen to what we have to offer in the 49th state.

Posted by Beaver Creek Cabins & Guide Service at 11:08 AM 1 comment: 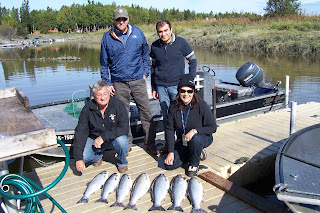 Many of you regulars will know Phil and Debbie Dreyer (kneeling in the front in the photo above).   If you haven't met them at Beaver Creek Cabins I know you've at least met their boat.   The beautiful blue Willie boat that is tied up on the end of the dock belongs to them.     It's the "Cocktail Boat" as many of our neighbors like to call it.   I guess I'd be stating the obvious if I had to explain why it's called the "Cocktail Boat". 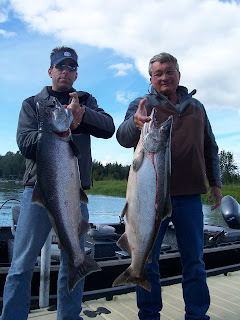 Up until Phil and Debbie bought their boat, they use to spend quite a bit of time in mine.   I didn't realize how much until I started looking through my photo album.  Believe me, the photos I've posted represents just a few of the trips we've spent together. 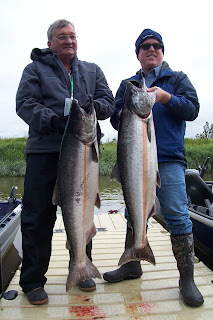 When you spend a lot of time in a boat with people you really get to know them.   It didn't take me too many trips to coin the term "Philism".    Basically, what this is is a clever or funny insight to the world around us.   For example, Phil was telling a story about catching a salmon shark.   I told him I heard they were very good to eat.   Phil said, "yeah, the first 400 pounds are pretty good but after that you get a little sick of it."   That, my friends, is a "Philism". 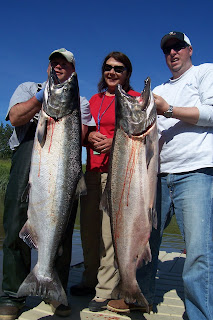 Here's a photo with Debbie with a nice Kenai king.  I always like it when a fish is too large for Debbie to lift up. 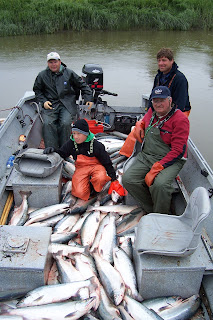 That's Phil on the bottom right.  He's a charter member of the original dipnetting crew. 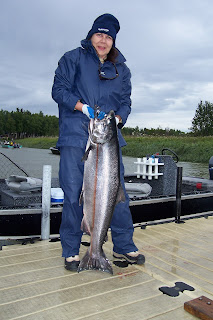 This king was on the edge of being too large for Debbie to hold up.   If that's a problem give me a million of them. 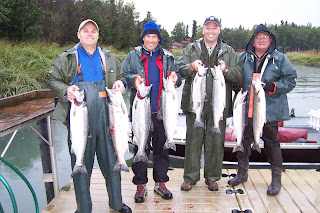 Here's Phil with a group of guys from work.  No question the silver bite was on that morning. 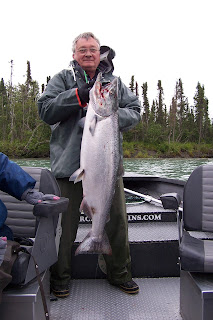 Here's one of the most memorable fish battles that Phil had on the Kenai.   If he looks a little fatigued he should be.   Phil must have walked around the boat 50 times before we could get a net around it. 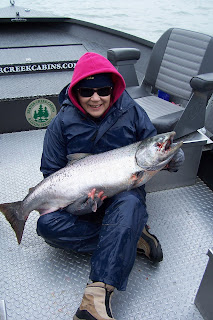 How cool is this photo?   This king was just the right size for Debbie to hold herself.  If I remember correctly, she didn't want to stand with the fish because she thought it might get away over the side of the boat and she had worked way too hard to let that happen.   Sitting on the floor was the best way to prevent that. 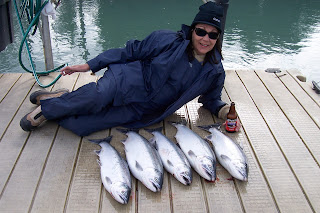 I can honestly say that no one strikes a pose quite like Debbie.  "Catching fish is icing on the cake!" 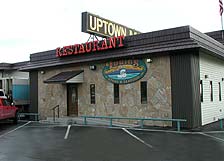 The Kenai River is what draws Phil and Debbie to the peninsula and that ultimately led them to us.  However, as much as they enjoy the river, a close second is having a meal at Louie's Restaurant in Kenai.   Nothing quite like catching a few salmon and then sitting down to razor clams, chicken sandwich supremes, and patty melts.

Summer is just around the corner.  Can't wait to see you guys again.


Posted by Beaver Creek Cabins & Guide Service at 9:34 AM 3 comments: 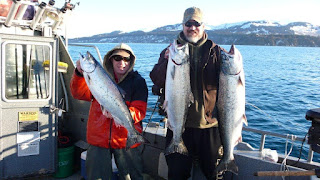 Jane and I have been getting ready for the St. Cloud Sportmen show that's coming up this weekend and out of the blue I received this photo.   That's my buddy Boo on the left, and a friend of his on the right, holding up three nice kings caught out of Homer.   He said I missed out on a great day on the water.

Hmmm, I guess I'm wishin' I could be fishin' right now rather than getting ready for a sport show.


Posted by Beaver Creek Cabins & Guide Service at 7:08 AM 2 comments: