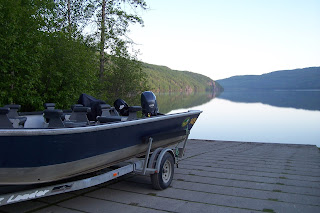 I purchased a new Yamaha, high thrust 50hp motor this week.  Since my favorite lake to break in a motor is closed to boat traffic (invasive weeds are present), I decided to go to Hidden Lake.  Hidden Lake is a gem of a lake situated in the 1.92 million acre Kenai National Wildlife Refuge.  It's approximately an hour drive away from our cabins. 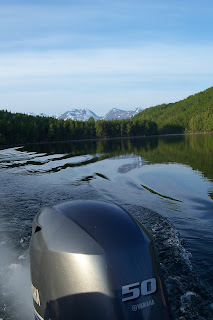 The lake got it's name because it's largely unseen or "hidden" from Skilak Lake Road.   With the main campground having 44 sites and a handful of other sites located on the islands, Hidden Lake is a popular destination for locals and visitors alike. 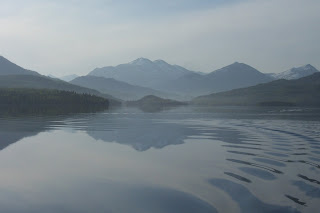 The manufacturer of the motor recommends that the first 2 hours of running time should be between 1500 and 2000 rpm's.  This is just above trolling speed and just below the point where a boat gets on plane. It took Jane and I two hours to run from one end of the lake and back. An absolutely perfect distance for this part of the break in period. 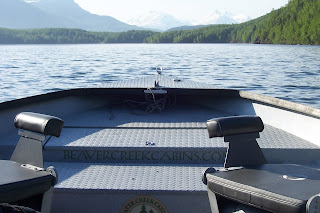 The manufacturer recommends over the next eight hours of use the motor should never be run at full throttle for more than five minutes. For the next four hours, we ran around Hidden Lake taking in the wonderful mountain views at varying speeds. 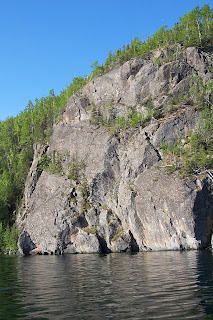 Let us not forget the fish in Hidden Lake.  Hidden Lake is home to lake trout, rainbow trout, kokanee, spawning and rearing for sockeye salmon, and rearing for coho salmon (Hidden Creek connects to the Kenai River and that is why there are salmon runs).   Overall, the species it's most noted for is lake trout.

Today I plan on putting my boat on the dock.  I have another four hours of the initial break in of the motor and I figure the river would be a good place to finish the job. 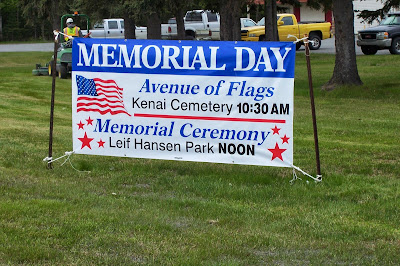 Today is Memorial Day.  For some, this is the unofficial start of summer and the beginning of the barbecuing season.  But for those who are dealing with a loss of a loved one, or their shattered bodies and minds, it's a remembrance of the true cost of war. Take a moment today to think of those who've served our country with such selfless pride and passion. 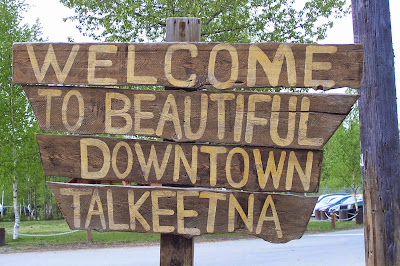 Last week I promised I'd share with you a road trip Jane and I took to visit friends in Talkeetna/Trapper Creek.   It's been four years since we took the 2 1/2 hour drive north of Anchorage.   Believe it or not, there's been quite a bit of growth. 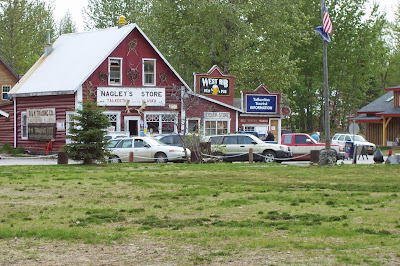 Instead of showing you the new buildings in Talkeetna, I thought I'd share a few of the old iconic ones.  This is Nagley's Store and it's where the mayor of Talkeetna lives.  Stubbs the Cat is the mayor (yes, that is correct, a cat is the mayor....). 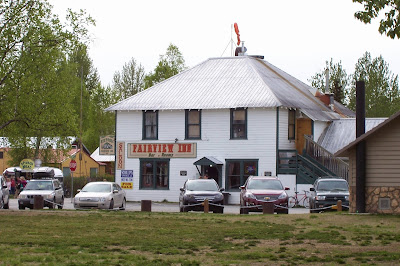 The historic Fairview Inn.  A favorite watering hole for the locals and tourists alike. 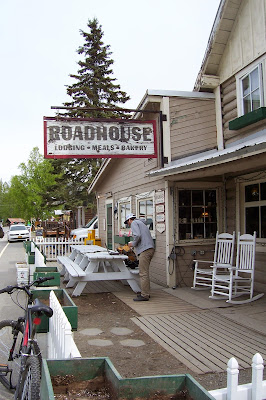 The Roadhouse.  Absolutely the best breakfasts served in town. 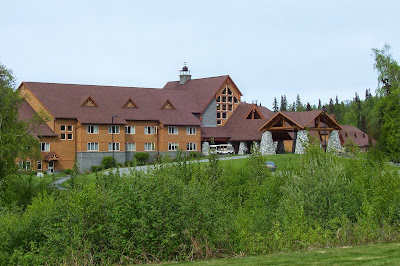 Okay, I had to share a photo of a newer building overlooking the village of Talkeetna.  This is the Talkeetna Lodge and it's where Jane and I stayed. Like lots of May travelers to Alaska, we took advantage of a spring special that the lodge was offering. It was nice that only a handful of people were there because once summer officially hits this place will be packed. 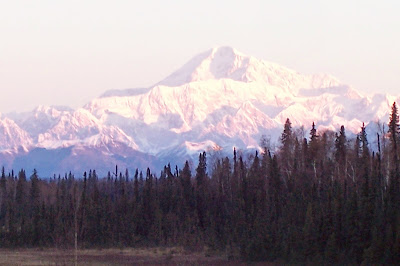 And this view is why it will be packed.  One of the best views of Denali (Mt McKinley) is off of the front deck of the Talkeetna Lodge. 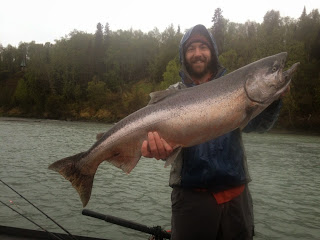 On to a fishing report.

Here's the first confirmed king salmon catch by one of our guests. The Cummings family were here for the weekend and said they would like to fish somewhere other than the ocean.  I called Mike Wheat and he was available for a king salmon trip on the Kasilof River. They had two bites on Saturday and Adam nailed the third one.  This was a 25lber and it immediately found it's way to the barbecue grill at the Chinook cabin.   Not too bad for what is being projected as a down year for king salmon.


Posted by Beaver Creek Cabins & Guide Service at 6:33 AM 1 comment: 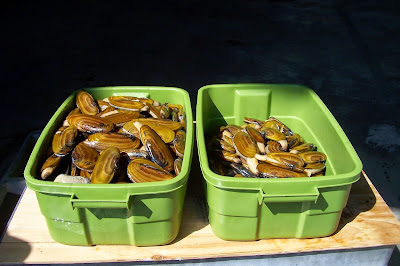 When it was announced that the east side of Upper Cook Inlet would be closed this year to clamming, I immediately got a hold of Big Will and asked if I could get on his waiting list for the next time he would go clamming on the west side of the inlet.   I told him Jane, Todd, and I would like to go.  I got the call last week and was told we would go on Sunday, May 17th. 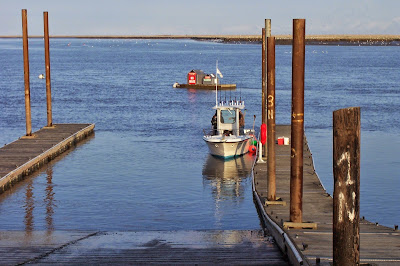 We met Big Will at the Kenai City dock at 6:30 in the morning.  The clammers would be Big Will, his daughter Amy, Tula, Amy's dog, Jane, Todd and I.  Our destination was Polly Creek and it would take an hour and a half to get there. 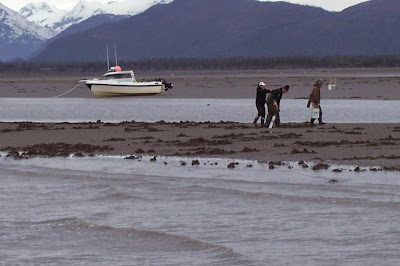 There are two ways to reach Polly Creek; by boat or by plane.  When we arrived there were 12 boats and just as many small planes on the beach.   Since this is a remote area there are no limits on how many razor clams you can take.  Until the tide went out and until it came back the five of us dug approximately 300 clams.   It was a lot of physical work to get them, and it took a lot of time to clean them as well. When it was all said and done it was 7:00pm when we finished.

It's an incredible resource at Polly Creek.  All the years clamming on the east side with Todd we realized we did more hiking than clamming, just because there weren't many there.  At Polly Creek, clams were everywhere and we didn't do any hiking.   I kind of missed the hiking part of clamming because when it's 100% clamming the work is arduous (a nicer word than saying back breaking).   All in all, since Todd, Jane and I had never been to the west side of the inlet to clam, we agreed it was a fantastic experience and we're happy Big Will called us to go with him. 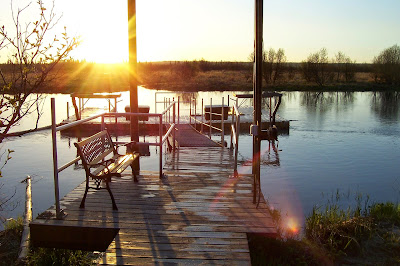 Thought I'd end this post with this photo.  It's starting to feel a lot like summer now that the dock is in.  Todd and I tried to get the dock in Sunday, but the tide was not high enough. Worried that it could be a month or two before the next large tide cycle, I called Jeff and Mike to lend Jane and I a hand in putting it in this morning.  I'm glad I did. We needed their muscle to get the dock over the ridge.  Always nice to have friends to help you out in a pinch...... 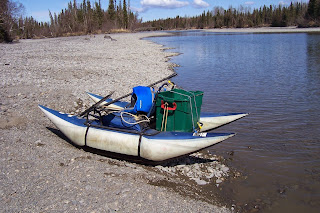 I wasn't the first guy out salvaging this year.  Let's just say a property owner somewhere between river mile 13 and 15 had a head start.   His report was that the picking was good. 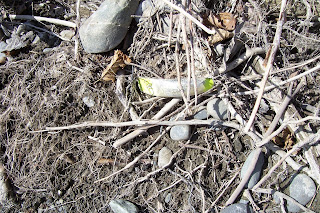 Knowing this before I drifted the river, I needed to search parts of the river that were more difficult to get to when the water levels are low. That is one of the advantages of salvaging with a cataraft versus a power boat. 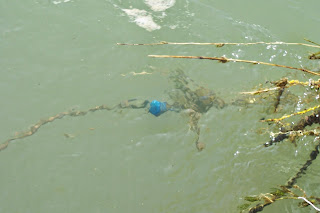 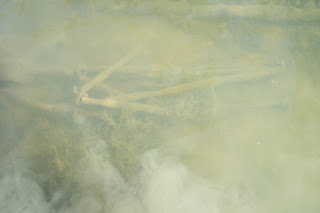 This is a folding chair that a bank fisherman must have lost. 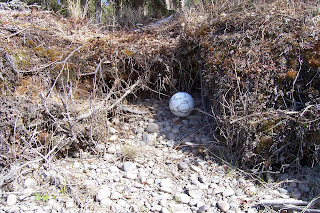 And, a soccer ball.  If you recall my post from the 2014 salvage run, I found a volley ball.  Good to know that there is a diversity of athletes on the river. 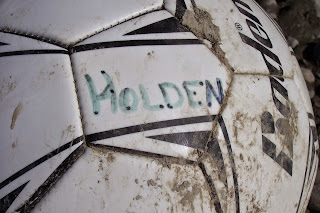 I had to take a close up photo of the soccer ball.  My last name, Holtan, is often pronounced by many as "Holden".  Made me laugh when I found it. 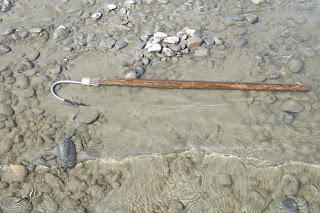 Perhaps the biggest find of the year for me was this gaff.  Makes me wonder about how it got there. You see, gaffs are illegal to use on the river.   It doesn't mean you can't have one in the boat, you just aren't allowed to use it on a fish.  If I have faith in mankind, the gaff was used to grab an anchor rope and it slipped out of someone's hands. However, the problem with that theory is I found it in a section of the river where anchoring is not done.  The real story of the missing gaff will forever be a mystery, that is, unless you're the guy that lost it and you're reading this story.  If you are, send me an email and fill me in on the details.

Well, that's about it. I've said this in previous posts about river salvaging; the Holy Grail is to find an anchor.  I was denied this year. Oh, I did find part of an anchor, but that does not count.   So, as long as the river stays low and clear, don't be surprised if you read about another salvage run. It's not over, until it's over....


Posted by Beaver Creek Cabins & Guide Service at 8:46 AM No comments:

First Guests of the Year! 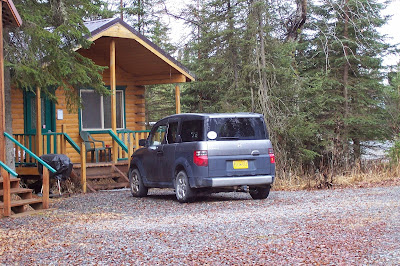 With a mild winter came an early spring.   Because of these conditions we were able to turn the water on in the cabins a good three weeks earlier than normal.   This year our first guests arrived on April 25th and they plan to be here for about a month.   Definitely a record for the earliest opening of Beaver Creek Cabins & Guide Service.

If you were expecting this post to be about a river salvage run, I'm sorry.  The logistics and timing just didn't work this past week.   Next week things look better and I'm anxious to see what treasures await..... 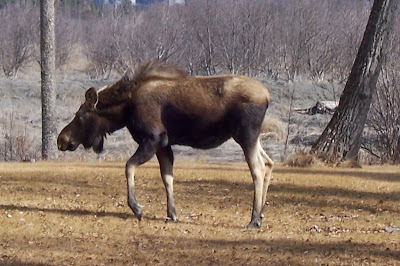 Posted by Beaver Creek Cabins & Guide Service at 8:22 AM No comments: