The Alaska Department of Fish and Game has announced today that from 8/1 until 8/15 the use of bait and multiple hooks are prohibited.  This emergency order is to help reduce incidentally hooked king salmon while fishing for coho salmon. 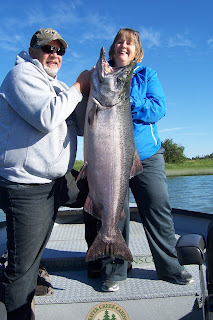 Stick a fork in it.  The 2013 king season has prematurely ended.   I agree with ADF&G's decision to end the king season but my thoughts are they should have done it sooner.  The overall numbers are at a historical low but hopefully this action will allow enough fish to enter and spawn so our future runs will not be in jeopardy.

So, how as the fishing this past week?   It was fair.  The photo above is the last king retained in my boat for 2013.   That's Erik helping Charlene hold this beautiful 47" king.   Let me tell you, this was a special fish.  Not only was it caught on the last day of catch-and-keep, but Charlene has waited three years to catch a Kenai king salmon.   Probably the only thing that would have made this morning better is if her sister Holly had been there to share the experience.  Anyway, thanks for hanging in there, Char, and thanks Erik for telling her it would be just a matter of time before she caught one. 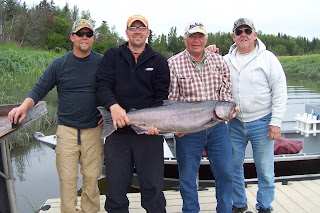 Here's Team X after their half day trip on the last Super Tuesday of 2013.   From left to right are Adam, Corry, Jack, and Charlie.   Adam started the day off with a small king that was released.  Jack, ever the shy one, followed up with this nice fish.   I'm glad that I finally got Team X on board with a Kenai king.   But, let me say this, there is no justice in the world if Charlie doesn't catch one the next time he's here.   He's been more than patient waiting out a king bite and it has to be his turn next. 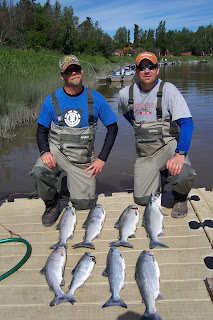 Here's Adam and Corry with a few of the many red salmon they caught last week. 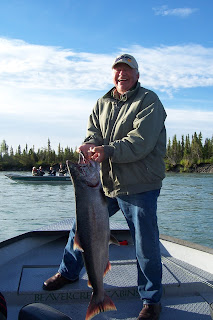 One last photo of Jack and his king salmon.  I used this picture not so much for Jack but for the guys photobombing in the back.  That's Mack and Carol Padgett getting in on the action. 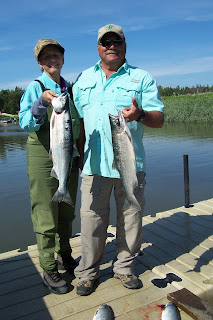 The last time Kathy and Tom Fornshell came to Beaver Creek Cabins was ten years ago.  Kathy caught a gorgeous king salmon then but unfortunately this time all we could manage was one king bite.  We did go to the bank and catch a few red salmon though.  Not a bad plan B when the kings weren't cooperating. 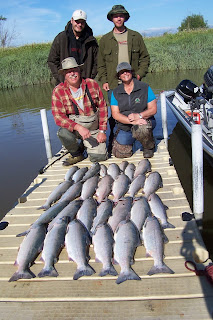 Our good friends Bill and Linda "the Salmon Slayer" Boettcher came down with their visiting sons from Florida, Wes and Nick, to try their luck for king salmon.  Unfortunately, with the catch and release order we did not fish for kings but opted to bank fish for reds.   The fishing was not all that good for us; a total of 6 fish in a day and half.   Since Bill and Linda are Alaska residents we decided to switch things up and loaded up the dipnets and headed to the mouth to see if any reds were still coming in to the river.   The dipnetting wasn't too bad, as you can see in the photo above.

Since king fishing is closed this next week I'll be targeting red salmon and silver salmon with my guests.   Overall, the red fishing in the lower river this past week was very slow.  I'm hoping a new pulse of red salmon will enter the river soon.  It's still a bit early for silver salmon but I know at least one that was caught while king fishing.  I think if we start targeting silvers this week we'll be able to find more.

Time will tell.   See you next week.

The Alaska Department of Fish and Game has announced effective 7/28/13 the Kenai River will be closed to all king salmon fishing until the end of the season (7/31/13).  This closure is an effort to conserve late-run king salmon escapement.

I anticipate another emergency order will be made soon to restrict the beginning of the silver salmon season to no bait, single hook.  This happened last year when the king season closed.  ADFG should take this measure  to reduce incidental catching of king salmon.

Stay tuned to the blog for anymore emergency orders.
Posted by Beaver Creek Cabins & Guide Service at 9:07 PM No comments: 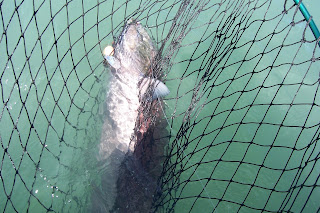 Always wanting to give my readers the most current information, today the Alaska Department of Fish and Game announced effective 7/25/13 the Kenai River king fishery will be catch and release only.

If there are any other changes in the fishery I will let you know as soon as I know.
Posted by Beaver Creek Cabins & Guide Service at 8:00 PM 1 comment: 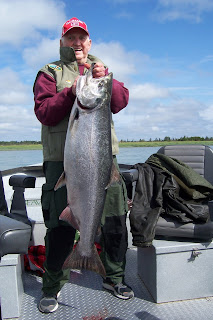 What a roller coaster ride of king fishing last week.  One morning no fish than in the afternoon several fish.  The next day just the opposite.  Nobody saw this better than Aksel, Preben, and Mogens of Team Denmark.   Here's Aksel holding up a nice king that took less than one minute to bite.  It was a heck of a way to start out his week of king fishing. 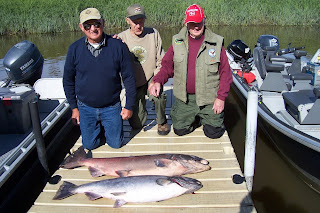 Here's a group photo of Team Denmark on a day they kept two king salmon and released one.   Mogen caught the largest king which was just under 60lbs.    An amazing battle won by an 85 year old Dane. 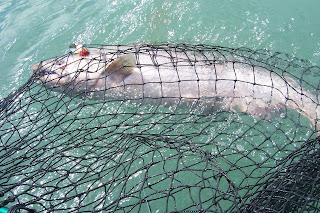 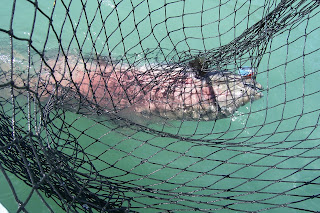 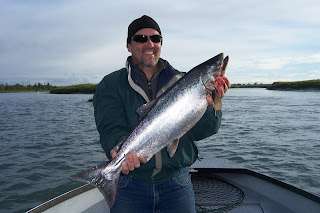 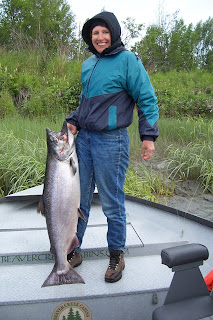 Shortly thereafter he was upstaged by his wife Jodie. 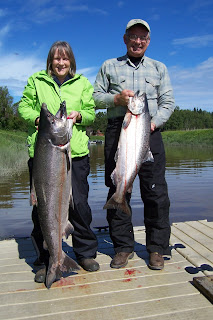 Dave and Linda also had a nice morning on Thursday.  Like Mike and Jodie, Dave caught the first fish and then Linda quickly showed him a "real" Kenai king.   It was stange that two straight mornings the exact same thing happened... husbands and wives catching kings and the wife catching the larger one.

My overall observation this past week was it was good for some and not so much for others.  This not only applied to my boat but the river as a whole.   It would have been nice to boat a few fish for Team Zweig (Rick, Jaimie, and Erik), and Team Miller (Gene, Dick, Kim, Jake, and Jenny) but that's just the way this king fishery works.   At least one thing I know is they all caught a whole bunch of red salmon to take home and that makes me feel a lot better.

That's it for now.  See you next week for another recap of fishing the Kenai. 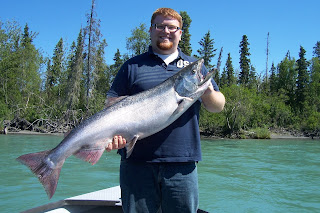 My prediction last week for the most part held true.  The average size of the king salmon improved but the total numbers entering the river still remains below average.    If the numbers do not improve this week I suspect ADF&G will have no other alternative but to restrict the sport and commercial fishery.   I am, however, cautiously optimistic that no further actions will be needed.

On to the report.  I had a great day on the water with the Johnson family.  They just finished a cruise through the Inside Passage and decided to work a day in on the Kenai.  Great weather and a 45 pound king salmon capped their trip to Alaska.   Steve, pictured above, was proud to tell me that this was the biggest fish he's ever caught.   When he got it into the net he said that it would tow a muskie backwards!  No doubt, king salmon fight hard. 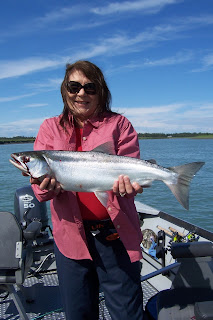 Debbie Dreyer and her daughter Jen spent an afternoon with me.  Although not a king, this red salmon made for a great dinner.   It's always fun to have Debbie in the boat because she always has some kind of cosmic connection with the river.   I started to think about all the time I've spent on the water with Debbie and to the best of my recollection she has always caught a fish.  Next time we'll have to get Phil out there with us because, like Debbie, he's about as fishy as they come. 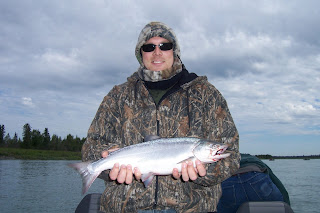 This was a first.   I've been told that the Kenai River has  a small run of pink salmon on the odd years but I've never seen one with my own eyes.   That's Jake Miller finally producing evidence that there are pinks in the river not just during the even years. 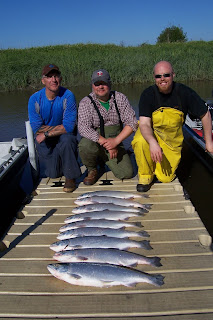 Finally, I rounded out the week taking these guys out.   Nice job Ken, Jim, and Matt on the reds.

So, on to the week ahead....I have my fingers crossed for the king fishery.  On the other hand, I have no problem saying the red salmon fishing will be very good to excellent.

See you next time. 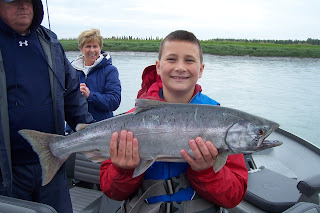 The first week of the second run of king salmon is officially in the books.   It was good to be fishing the Kenai again but the word that probably best described the action was slow.   But who says we didn't have some fun?    Dan and Mary Meyer brought their grandson Jacob to fish with me.   Although this wasn't the largest king in the river, it was the biggest fish Jacob has ever caught.   It feels pretty good to know that while in Alaska this was second best thing he did.   Jacob said catching a Kenai king ranks right behind panning for gold. 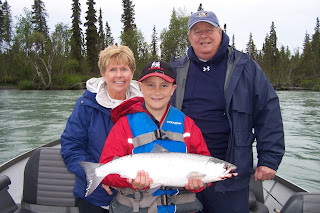 A king wasn't the only fish Jacob landed.  He also caught this red salmon.   For all of you red anglers out there the run is just beginning.  There are several areas where people are catching a few reds but the action is on the slow side.   The next week should see the first real push of reds 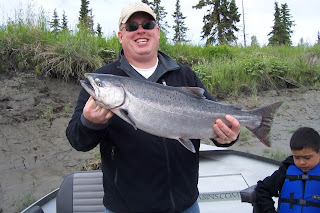 I had a great afternoon fishing with Mark and his family.   Mark didn't have his line in for more than five minutes when this king attacked his kwikfish.   As you can see in the photo his son Luke was upset that he didn't catch the first fish.  A couple of candy bars later and he snapped out of it. 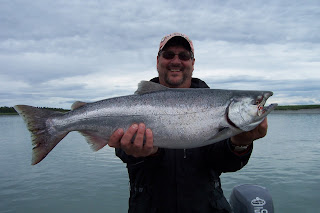 I ended the week spending a fantastic day on the water with guys that usually show up during the pink/silver salmon season.   Chuck, Jerry, Rick, Mark, and Alex (Mark and Alex are new to Alaska) were on their way to Kodiak and decided they wanted to give the Kenai a try.   Did I mention that the fishing was slow?    It took Chuck four cigars before he landed this fish.   We had a couple of other opportunities that day but I guess the fishing gods thought camaraderie was more important than landing fish.   As much as I like Chuck, I was really hoping that Jerry would have caught one.   Why you ask?   Well, let's just say Jerry is in the middle of a long dry spell.  Last year he was on the Kenai for three days fishing for silvers and never caught one.   I'm hoping he hasn't given up on the Kenai entirely and will come back in 2014.

This next week of fishing will be interesting.   The fish landed in our boat and for most others were on the petite side which is usually an indicator of fish "between the runs".    I anticipate larger fish should be in the mix but only time will tell....


Posted by Beaver Creek Cabins & Guide Service at 9:43 AM 2 comments: