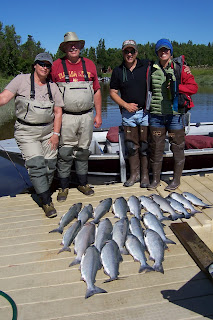 Let me start this post off with a comment before we talk about the fishing this past week.   Many visitors came to the Peninsula this summer to catch a Kenai king.  That is the trip they booked.  When the king fishery was closed many people decided to do other things.  Because of the changes, I cannot fault anyone for cancelling a scheduled Kenai king trip.   I did provide guided red salmon trips as a replacement for some of our guests but many of our long time clients are perfectly capable of doing this on their own and do not need my services.   Jane and I feel very fortunate that the majority of people who cancelled king trips this year have booked ahead for the 2013 king season.   Let's hope this year is an exception and not a pattern of things to come.   Now, on to the fishing report....

Pictured above are Linda, Bill, Mark, and Jodi.  Over the course of a couple of days we red fished, dipnetted, and red fished some more.   Needless to say there are tired arms and plenty of fillets in the freezer.  It was a lot of fun spending time with Bill and Linda again and it was great to meet Mark and Jodi for the first time.   Also, thanks guys for the great dinner! 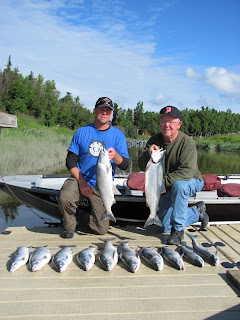 Above is Adam Extrand and his dad Charlie.  The downside of their trip was they couldn't try to catch a king.  The upside is that in over 20 years of fishing the Kenai this is the BEST red salmon fishing Adam has ever had. 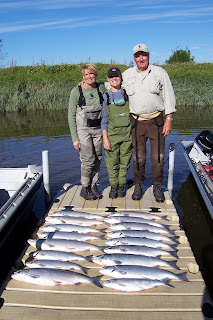 If you follow the blog through the years you've seen quite a few photos of Dave and Sarah Sporrer catching king salmon (pictured above with Jane).  This year Jane and I got to spend an afternoon with them fishing reds on the bank.   Great weather, great fishing, and great company.  Hard to beat that!

Let me end this post by talking about the weather.  Most of the lower 48 has been burning up this summer.   Alaska, on the other hand, has seen the second coldest July ever (Anchorage specifically).  The average temperature for the month has been 54.6 degrees.   Hate to rub it in but this is another great reason to visit Alaska in the summer.

See you next week.
Posted by Beaver Creek Cabins & Guide Service at 11:56 AM 4 comments: 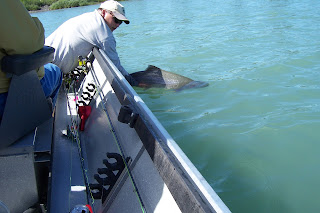 What a crazy week.

Tuesday was my last day of catch and release king fishing and the action was outstanding.  The boat managed 4 kings with a couple of more fish lost after a brief fight.  It was George, Jerry, Justin, Leonard, and Clifford who wanted to fish for the famed Kenai kings.  I do appreciate that they wanted to do this even though they couldn't keep any of the fish. 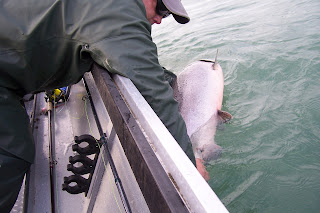 Here's a nice king released to continue it's journey. 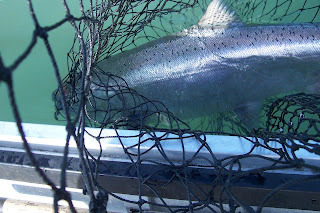 And, here is the last king caught and released in my boat for the 2012 king season.  Long live the kings! 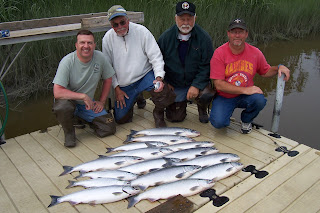 Our focus the rest of the week was on the red salmon fishery.   Fishing was not too good early in the week on the lower Kenai river.   A few fish were caught but it wasn't the classic "my arms are tired" red fishing that I'm use to.  That all changed on Friday.  Pictured above is Al, Gale, Dan, and Devin after a fun morning on the bank. 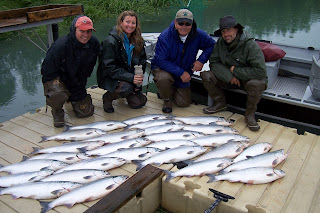 The limit on Saturday went from 3 to 6 red salmon and for a good reason......there are a lot of fish in the river.   Didn't take too long for Justin, Stacy (the Slayer), George, and Glenn to get their fish.

The week ahead should be more of the same.  Lots of reds and lots of tired arms.

The Alaska Department of Fish and Game has announced that the limit for red salmon has increased to 6 per day, 12 in possession starting Saturday, July 21st.

Better get 'em while you can because before you know it the run will be over!

Sorry for the abreviated post but it was just announced today that the king salmon season on the Kenai River will be closing on 7/19/12.  Sorry to all the people that had their hearts set on battling a Kenai king but conservation comes first and the Department of Fish and Game has decided this is what's best for the future.

Look for my normal post at the end of the week.
Posted by Beaver Creek Cabins & Guide Service at 8:08 PM 2 comments: 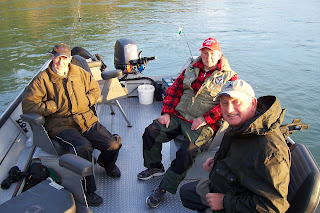 After this past week I am now the unofficial guide to Team Denmark.  From left to right is Mogens, Aksel, and Preben all from Copenhagen, Denmark.   About half of my groups cancelled last week due to catch and release measures on Kenai kings.  These guys were on unaffected by the changes and said, "let's go fishing."   I'm glad they did. 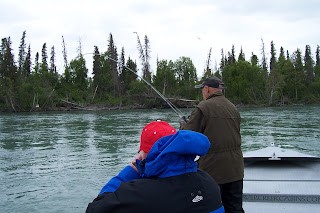 Mogen's had the hot hand king fishing.  He managed to catch three. 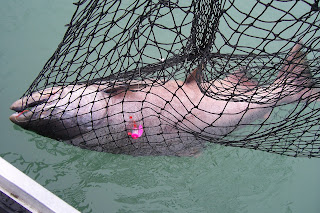 Here's a picture of his first, and largest king salmon.   I'll estimate the weight at 45lbs. 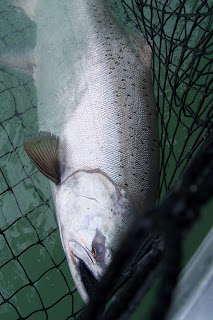 Here's a photo of a 35lb king that Aksel caught.  During our fishing Aksel mostly held on to his rod as we trolled.  If he turned his back to me I would often grab his rod and this would fool him into thinking he had a bite.  Well,  one time he turned back to look at me just as I was about to grab his rod.  We laughed because I was caught and not 5 seconds later this fish grabbed his spin 'n glo.  Who had the last laugh on this one?  Besides this fish Aksel caught another one and since his brother Preben had not caught one he let him fight it.  Truly an unselfish gesture on his part. 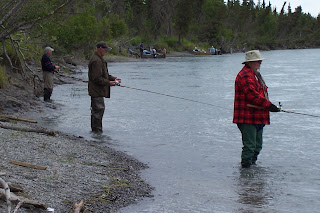 We took a break during a king trip and decided to fish for reds. 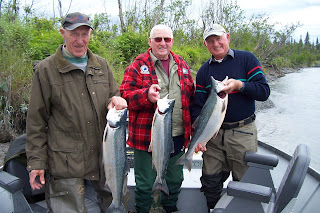 Here are the fruits of their labor. 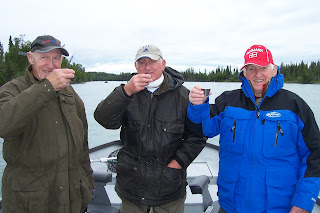 A Danish toast to the salmon gods after a good day of fishing.

Jane and I had a great time visiting with these guys.  They've been coming to Alaska for 23 years and until this year they were campers.   Did they enjoy their adventures on the Kenai and their stay at Beaver Creek Cabins?  You bet.  Before they left they booked for next year.   They said it doesn't matter if it's catch and keep, or catch and release they're coming back to the Kenai. 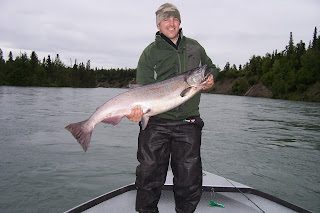 I was hoping the first week of July would not be a repeat of what happened in June.......I was wrong.  I just attended a "King Salmon Preservation Rally" this morning at the offices of the Alaska Department of Fish and Game.   It was an opportunity for all citizens to express their concerns about the lack of king salmon in the Kenai River and the state overall.  Believe it or not it was a civil gathering with a common goal:  GET MORE KINGS IN OUR RIVERS!   The timing of this rally conicided with the latest emergency order.  As of July 9th the Kenai River will go to a catch and release fishery.   Unless the run gathers strength there is a strong possibility that the river will close to king salmon fishing for the rest of the season.   Definitely unchartered waters for the Kenai and the month of July. 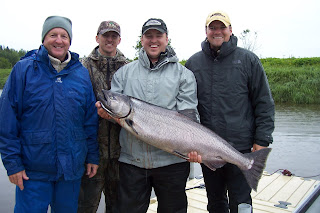 So, I can describe this past week of fishing in one word:  tough.   We managed a couple of bites, one king salmon, and a rainbow trout.  The top photo is Mitchell with a 40lb king.  When we got back to the dock I asked these guys if I could take a photo of Team Minnesota (Tom, Jacob, Mitchell, and Jacob).  I always say it takes a team effort to land a king salmon and no doubt this was the case.   Lots of chaos in the boat especially when all lines were tangled together with the fish.  It's never dull or routine when there's a king on the line. 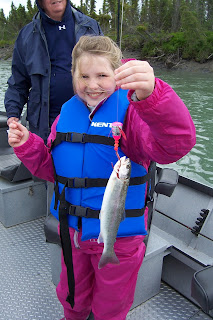 Here's Ellie "Penelope Pink Boots" holding up a rainbow trout that bit on, what else, a pink spin 'n glo.   I sure had a lot of fun spending time  with Ellie and her grandma and grandpa Meyer.
Hey, Dan and Mary, it will be a short nine weeks until we get to chase silvers in the river.

Let me end this post by saying Jane and I are busy contacting our July guests to inform them that the fishery has changed.  If we haven't got a hold of you yet, be patient.  Or, feel free to give us a call or drop us an email.

Posted by Beaver Creek Cabins & Guide Service at 10:41 AM 3 comments: 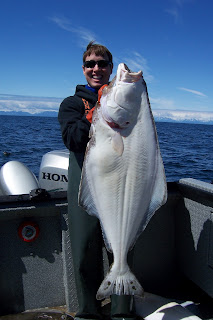 Nothing but a halibut report for you this week.

Late Tuesday night I got a call from my good friend Boo Kandas of Tall Tale Charters and he said he had two seats available the next morning for a halibut trip out of Homer.   He said the ocean has been calm and the fishing has been really good.   I didn't hesitate to grab the seats and I'm glad I did. 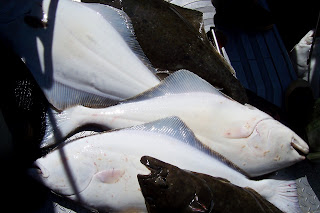 What an incredible day.  The weather was gorgeous and the boat landed nearly a hundred halibut.   The only other species we managed to catch were skates and Jane was the Queen.   She muscled up 5 of these beasts.  If you've ever caught one before you know exactly what I mean by muscling.  As my buddy Steve would say, "a skate could tow a halibut backwards." 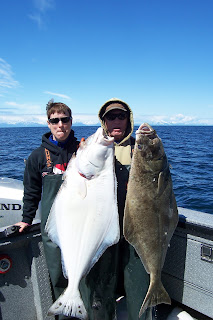 Here's Jane and Capt. Boo holding up a couple of nice eating halibut.   Incidently, Boo is the guy that we've been recommending to our guests for saltwater trips out of Homer.  He's a great fisherman and the guy is an absolute riot.....and, no, he is not the Unabomber In Training.

Tomorrow the Kenai reopens to guided king salmon fishing.  I'm excited for two reasons: 1) being off the river for 12 days has made me a bit stir crazy, and 2) I have Dan and Mary Meyer and their granddaughter Ellie in the boat.  I can't wait.

One last comment, on Saturday Mack and Carol Padgett had their 3rd Ever Pig Roast.  It was a beautiful evening of food, spirits, and conversation.   Jane and I would like to thank them for including us and hope it's not another ten years before they host the next one.

Fish on!
Posted by Beaver Creek Cabins & Guide Service at 11:53 AM 4 comments: