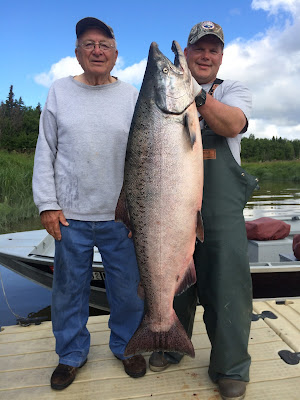 What a week to be on the Kenai River.   Very good fishing without bait, incredible fishing with bait. Friday night the ADFG determined that the Kenai would meet the escapement goals for king salmon and opened up the river to the use of bait until the end of July.

No doubt the highlight of the week, if not the season, is the fish that Gene Miller caught (pictured above).  For four years Gene has fished king salmon with me.  The boat always landed a king or two on each of his trips, but this is the first king for Gene. When I netted the 65lb buck I looked at him and said "I can now cross you off of my bucket list".   It was a long wait for both of us. 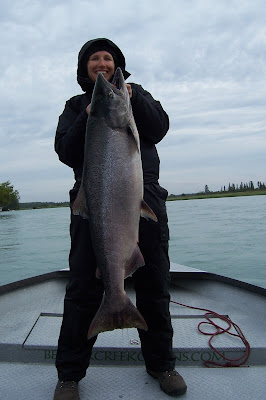 Jodie Stacken continued her mastery of the Kenai kings. 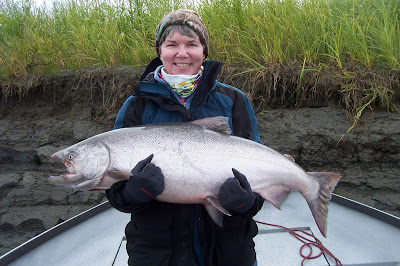 And so did Kim Miller. 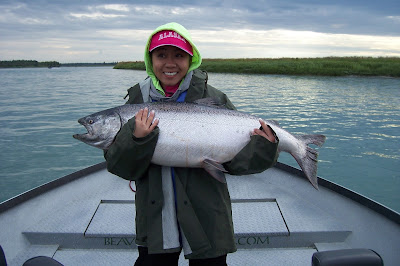 Jenny kept the string alive for women anglers this week.  This is her first and biggest king ever.  I'm sorry that the husbands, Mike, Dick, and Jake, didn't land a king but I think they were happy to watch their wives bring them in. 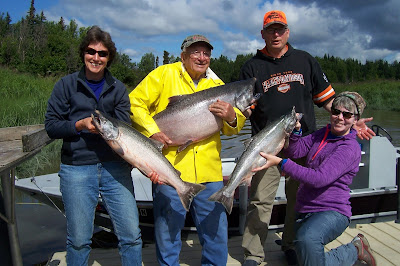 Group photo of Miller and Stacken party. Jodie and Kim with their second, Gene with his big one, and Dick wondering, "where's mine?".

Here's Christoph with a nice 45lb buck he caught on an afternoon trip. 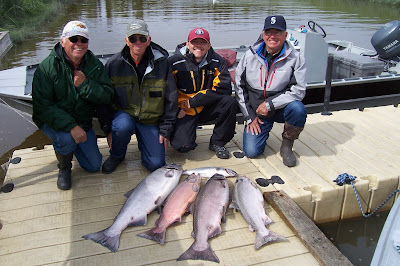 Here's Team Bangen with their limit of kings on the first day of bait.

How was the red fishing you ask?  Not bad.  Some days the run was strong, other days perseverance and patience would lead to limits.

It looks like the week ahead should still be good for red salmon, and I anticipate the king fishing to be good as well.   I haven't heard of any silver salmon being caught on the river yet but it's just a matter of time before these fighting machines make their way back.

Until next week, tight lines. 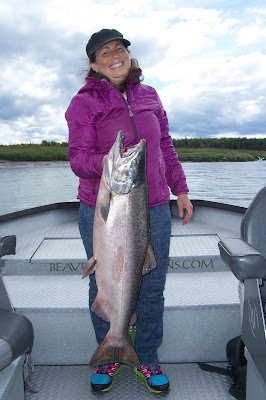 This might be the least narrative of any of my fishing reports.  I am literally running from sunrise to sunset and in Alaska that's a lot of time.   Briefly, the king fishing was okay this past week and the red fishing picked up on the weekend.  Above is an old college friend of mine, Amy Fitzpatrick with a nice king caught on her first troll of the afternoon. 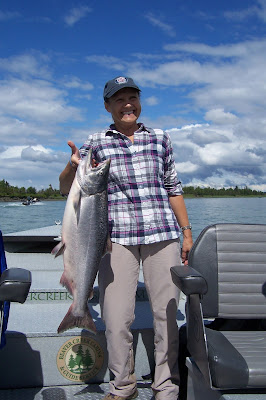 Here's her sister in law Karen with her king caught on the second troll of the afternoon. 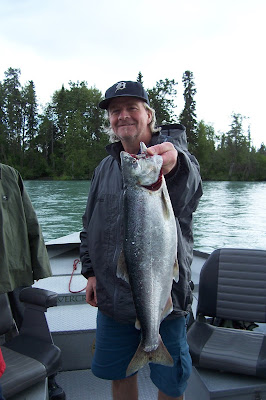 Finally, here's Amy's husband Mike with his king caught on the third troll of the afternoon. 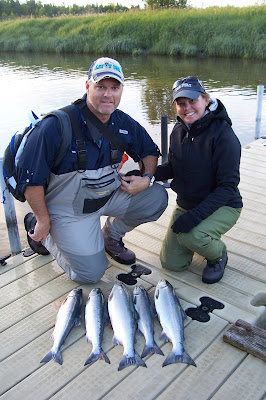 Here's Tim and Patti nearly getting a limit of reds. 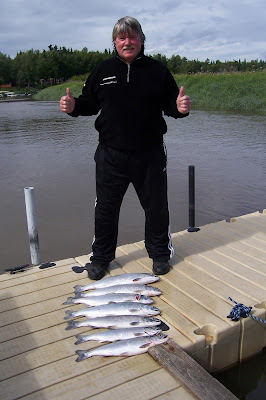 And here's Gary happily standing by the reds he and Tammy caught. 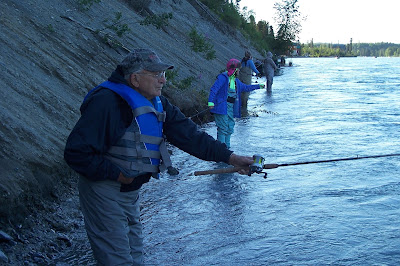 A morning of red fishing with Gene, Jen, Kim and Jake.  It was slow and the only legal fish caught was by the master himself, Gene. 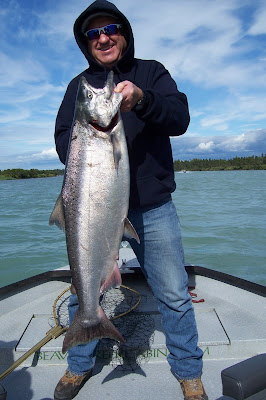 Nicest king of the season.  John shook for 10 minutes after he landed it.  I couldn't be more excited for him. 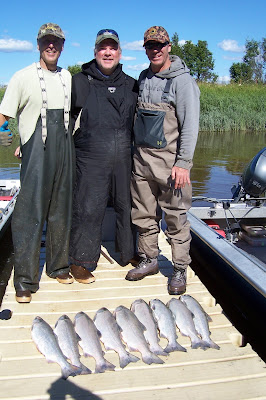 College buddies Todd, Mark, and Tony with their reds,

I've got a hundred things I need to do before tomorrow so I won't go into any details of what I think the week ahead will be like.  I just know I'm fishing and it's going to be great.  See you next week. 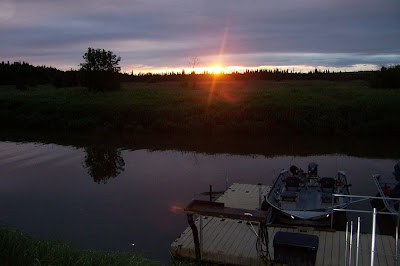 This past week was transitional.  The king run is improving and the red salmon are starting to find their way up the river.   Overall, the fishing was okay. 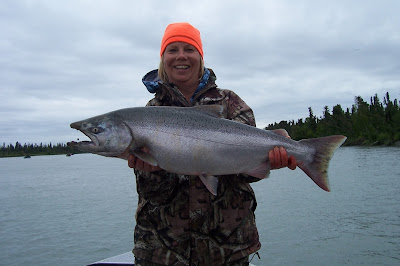 I spent Tuesday and Wednesday fishing Chuck and Linda, who are from Northern Minnesota.  I loved the conversation (don'tcha know) and the bonus is I could talk about my other passion...hockey. Their son plays in the NHL and I couldn't get enough of what they've been through as parents and to listen to the stories about their son's life as an elite professional athlete.  By the way, way to go Linda for keeping the string alive for the women (she outfished Chuck in the ocean as well).

I had a couple of days off after guiding Chuck and Linda and I was told by other guides that Friday was the best day of the season to fish kings.   Good numbers and the size improved.   And of course, that little flurry disappeared by the time I had a trip on Saturday.  But the day was eventful and several firsts happened to me.   In my morning trip, I had Reed, Jeff, and Sandy out. Sandy, keeping with the ladies catch the most fish theme, had a tremendous bite, with a very positive hookset. Unfortunately, after a short minute, her line went slack.  When she reeled the line in all that was left was the planer, a swivel, and about 2 inches of the leader. A 50lb leader had just snapped on this fish. What the?????  That was a first for my boat.  I'm very particular about my gear and retie my leaders and redo my knots before every trip. The way I see it, I can't control the fish, whether they want to bite or not, but I can control my gear. If my gear fails, I failed you.  I almost wish the knot gave out and the blame would be squarely on me.  But, this was the line.  My only conclusion is that there had to be a nick at that spot and under pressure it snapped.   Maybe it was a world record king, who knows, but thanks for being understanding Sandy.   I guess stuff just happens. 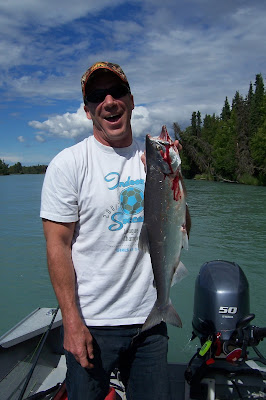 So here's another first.  Saturday afternoon I fished my college buddies, Peggy and Tony Brown, their daughter Shelby, and her friend Nick.  We had a nice king bite, missed it, and later in the trip Tony lands this pink salmon.  July 10th!  A pink in non pink year.  I have caught other pink salmon in a non pink year but this, by far, was the earliest ever.  Crazy. 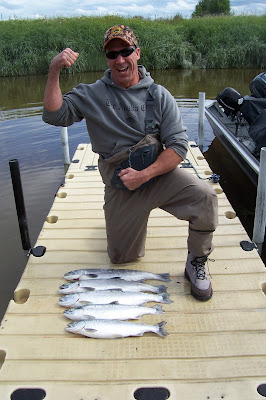 In other fishing related news on the Kenai, the dip net red salmon season opened on Friday.  Today, Tony, Shelby, Nick and I went out to catch a few for ourselves. Here's Tony proudly posing with the catch.  It was slow, and a they were a little on the small side, but at least we weren't skunked. 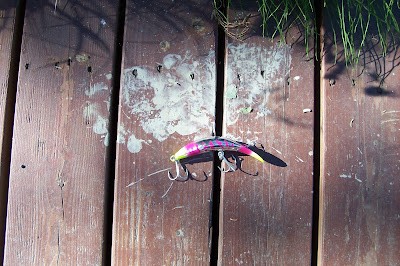 Thought I'd end the post with this little nugget.  The other morning, the dock was wet and I couldn't help but notice muddy footsteps on it.  This is not unusual.  By the end of the day the footsteps had dried. With closer inspection I soon figured out that this was not caused by a human, but by a brown bear. As you can see, next to this Kwikfish is a paw print of a very large brown bear. 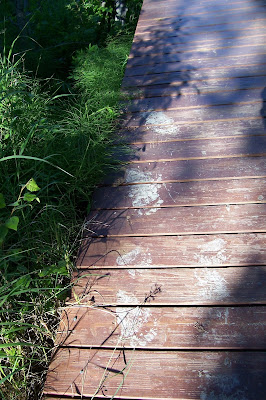 I hope I'm not scaring anyone about bear issues around Beaver Creek. We have them, and always will.  But these bears are mostly nocturnal and they usually hear and see you before you see and hear them and they disappear.  It's a great relationship and I'm glad it's almost always paw prints that I see.

For the week ahead: I started my report by saying this past week was transitional. Historically, the upcoming week should be the peak of king and red salmon numbers.   High numbers do not always mean the best fishing, but it's definitely the time that the whole community (and beyond) looks forward to.   I can't wait to get out there. 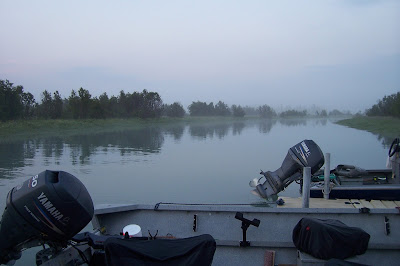 It's 5:00 am, the sun is rising, and the fog is rolling in.  I've loaded the boat and I'm waiting for my first clients of the year to arrive.  It's peaceful, and I'm exceptionally excited because today is the first day that I'm able to fish for king salmon on the Kenai River.  I think to myself that I'm a lucky guy. And so begins my 2015 season. 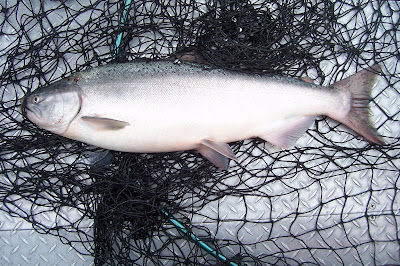 Fast forward to today...... I would have to say the fishing has been slow. And, what has been caught has been on the petite side.  Oh, we've had multiple bites on our trips, which is good, but only a few stayed on the hook.  In my opinion, it seemed to be that way for everyone this past week. 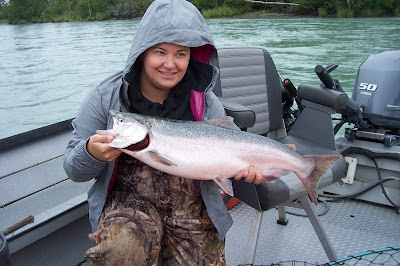 So, here are the glory pictures (and it's no coincidence that the men were out fished by the women). Brittany is a savvy fishing gal from Washington, and after missing a few fish she asked what other color spin 'n glo lures I had.  She said she needed to change her luck.  After digging around in my tackle box, she found a black winged, black polka dotted pattern lure and asked to use it.  I always say all the gear in my boat will catch a salmon and if you have a hunch about a particular color than let's go for it.  Not long after she changed out my "go to" color, she caught this fish.  When it was in the landing net I told her that was the first time that lure color has caught a fish in my boat. I then told her about an incident over ten years ago that I had with Dick Miller. Same exact scenario except we hadn't had a bite all day. For the record, Dick's color of choice was the watermelon pattern spin 'n glo. 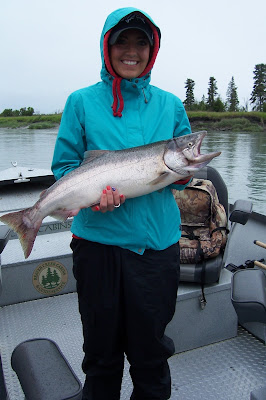 Here's Rachel.  She's from Anchorage and when she came aboard she said she had never caught a king salmon before.  I'm proud to say that I was with her when she caught her first and her biggest king salmon. After visiting with her I have a strong feeling that this will be the first of many king salmon in her lifetime.

Well, that's my report of the beginning of the late run king salmon fishery on the Kenai.  A bit slow, a bit small, but hey, we were fishing.  But before I end this post I thought I would comment about the early king salmon run.  As you know, the river was closed to all king salmon fishing in May and June. Because of the drastic measures taken, the Kenai met the bottom end of the optimum escapement goal (OEG) by almost a thousand fish.  In my opinion, it could have easily opened to catch and release opportunites in the middle of June. But, for reasons beyond me, ADFG decided to leave it closed. Hopefully, and my fingers are crossed, this closure will result in strong returns in the years to come. Long live the kings.

Until next week, tight lines!