A Journey Of A Thousand Miles Begins With A Single Step


And so it begins. The 2017 season is officially underway with the annual ritual of "let's wake Jane up at 5:30am to help me put the dock in".

At 6:05am, the largest tide of the month occurred. I was worried that if the creek wasn't ice free by today, I wouldn't be able to get the dock in until June. Not good considering I have guided trips scheduled before then. No question, going to a boat launch daily defeats the purpose and advantage that we have on the creek. After all, our tag line says it all: "Out of Bed....and into the Boat!"


I was thankful that the last ice flow exited Beaver Creek Wednesday evening. It was near perfect timing for a Friday morning dock installation.

So, what's the second step of a journey of a thousand miles? I would say a nice river salvage float, but I think it's going to be getting the cabins ready for the season ahead instead. 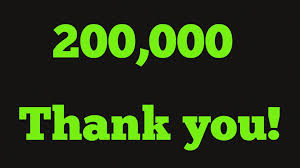 Since I'm pretty confident I will never receive an Oscar, or an Emmy, this will be the only place that I'll be able to make a thank you speech to my "fans", i.e. readers. Wow. I'm amazed that over 200,000 views have happened on this blog. Just, wow.

So, who to thank? First and foremost, I want to thank my mom and dad. I owe everything to them. Secondly, I want to thank my kid sister Heidi for convincing me to do this blog (sorry Heid, I still haven't got on board with that Facebook thing). Finally, I want to thank Jane for being my wife, partner, editor and guidance counselor. I'm not always the most coherent blogger when I'm in the middle of the summer fishing grind, and your perspective and patience has saved many, many posts. Thank you, thank you, thank you.

The music is starting to play me off so I better end this by thanking all of you for coming back week after week to see what's going on. If it weren't for you I wouldn't continue to to this....Oh, oh, oh, and thank you Mac for being a great kid. I love you and go to bed!


Posted by Beaver Creek Cabins & Guide Service at 10:02 AM 2 comments:

Release a King, Get a Free T-Shirt Offer 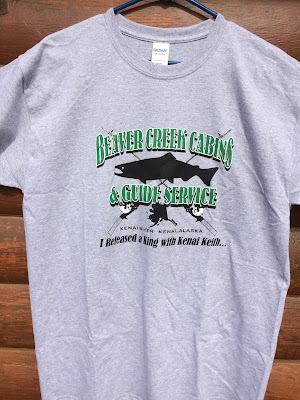 With the new early-run Kenai king salmon management in place for 2017, I decided it was time to try out a new program as well. Starting May 1st and ending June 30th, any client of mine who releases a king salmon larger than 36" will receive a free t-shirt. 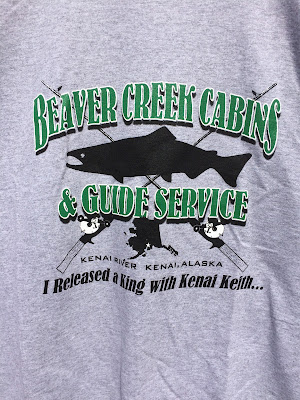 This is not just any t-shirt. This is a one of a kind "I Released a King with Kenai Keith" t-shirt. Who knows what the secondary market for this baby is going to be.
Depending on how successful this becomes, there's a good chance I'll extend this offer into the month of July as well. Stay tuned...

The advantage of living in the digital age is that I'm able to take a lot of photos and have plenty of room to store them all. As I was looking through my library of photos today, I realized I have over seven years of fish photos archived. Not that long in the big picture, but seven years in the life of young boy is a long time. Case in point is this All-American, boy next door, kinda guy, Lars Ohlin. From the photo above to the photo below I'm amazed how much he's changed since his first trip to Alaska.
Lars' dad, John, and I have known each other since the 80's. An introduction by a mutual college friend and our shared passion for all things fishing and hockey have kept us connected ever since. Fast forward to 2008. John asked me if his youngest son, Lars, could spend a couple of weeks helping Jane and I out at the cabins. My response: ABSOLUTELY. Lars helped us by mowing the yard, cleaning cabins, and cleaning my boat. In addition, if I had an open seat he'd jump in the boat and be my deck hand for the day. If I didn't have an open seat we'd go out in the evening ourselves and fish until the sun set. The hours were long for a young guy. Some days he'd be up at 4am and he wouldn't find his bed until after 11pm. There were no complaints and everything was done with a smile. How great is that?
After the first year, I asked Lars if he enjoyed helping us out. He said he did. I thought he meant it but I didn't know for sure until the following summer. His dad asked if he could do it again. My response was the same as the first time: ABSOLUTELY!

And a third year became a fourth year.

Helping Jane and I out at the cabins came to an end when Lars graduated high school and moved on to college. Apparently, free room and board and all the fish you can eat doesn't help with college expenses......Ha! Anyway, it was a great run for all of us.

Lars has been out of high school for awhile now and is currently in the middle of getting his college degree. This past summer he came up for a week to hang out and to see Alaska again. The first two years Lars was helping us, his dad came to visit him. This time it was his mom Cori's turn to join him. To commemorate his trip back to Alaska, Lars decided to do a little more than take a few photos with his phone. Something a little bit harder to delete. 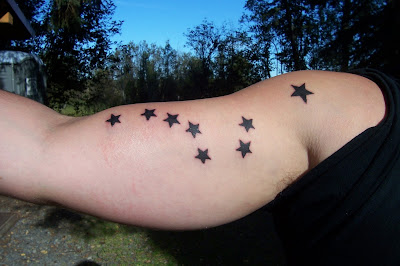 If you're not familiar with the Alaska state flag, the Big Dipper is prominently displayed in the design. Lars decided that his bicep was a good place to honor his Alaska connection.

It's been a pleasure to watch Little Lars grow up to become Big Lars. He's what the hockey world would call a "character" guy. That would mean honest, loyal, and willing to sacrifice for others. A team player, if you will. And, he's a pretty darn good fisherman to boot.

I'll end with a quote from the great philosopher's Bob Utecht and Casey Kasem, "Keep your head up, stick down....and keep reaching for the stars." See you down the road, Lars. 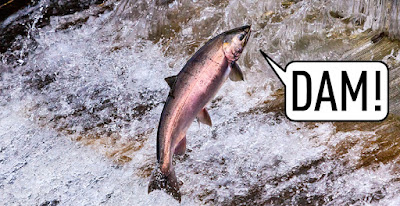 In order to provide a consistent electric supply to the Kenai Peninsula, Homer Electric Association has announced a proposal to construct a hydroelectric dam on Beaver Creek, a tributary of the Kenai River.

Lirpa Sloof, vice president of development for Homer Electric Association states, "we all know Southcentral Alaska has plenty of oil and natural gas to provide its residents. But, when the summer tourists arrive, the amount of electricity needed to power the recreation vehicle parks is at it's maximum. We need hydroelectric power to meet their needs."

Damn the Dams, co-founder Francis Estalilla says his organization will fight this proposal.

"Wrong dam, wrong place. Beaver Creek is too important to the Kenai River watershed. If the peninsula's power needs are not being met, they can run an extension cord all the way to my house in Washington State," said Estallila.

When asked for an interview about a power cord crossing their borders, Canada said, "no comment."

Public comment will be taken about the proposal up until midnight tonight, 4/1/17. Click here to comment and to read what others think of the dam proposal.


Posted by Beaver Creek Cabins & Guide Service at 12:30 AM 4 comments: