Sunset on the Kenai 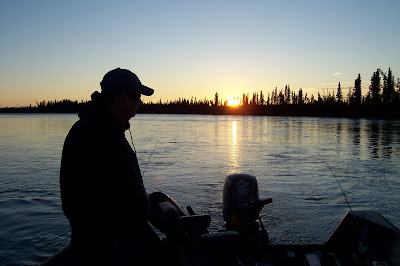 One thing I really like about silver fishing in the fall is that almost every evening I get to go out and fish. Some times I'm by myself, most of the time with Jane, but often I'll invite along people that are in the cabins for one extra try at catching a silver salmon.

This photo was taken in September around 9:30pm. Anybody care to guess who's in this picture? A brand new Kwikfish or Vibrax spinner to the winner.
Posted by Beaver Creek Cabins & Guide Service at 8:31 AM 6 comments: 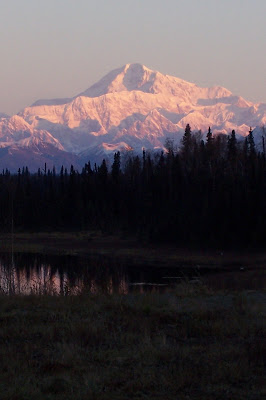 I took this photo yesterday in Trapper Creek. Mt. McKinley, or as the Athabaskans called it Denali (The High One), has an elevation of 20,320. It has a larger bulk and rise then Mt. Everest. Because it is so large it creates it's own weather and nearly 75% of the time the mountain is not visible. The reason I'm posting this picture is because it is more uncommon than common to see Mt. McKinley and I happened to be at the right spot at the right time. Kind of reminds me of king fishing on the Kenai.....
Posted by Beaver Creek Cabins & Guide Service at 3:55 PM 2 comments: 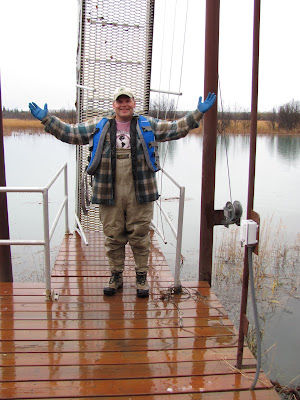 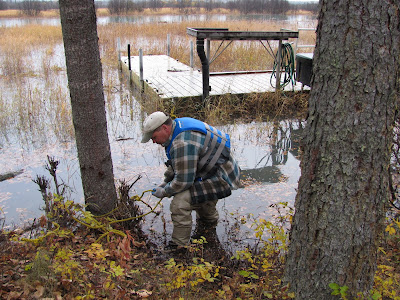 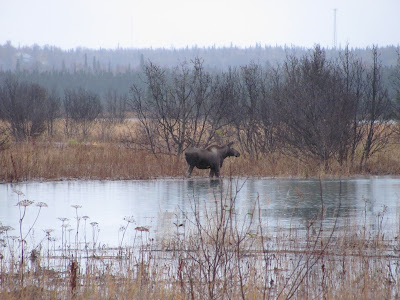 On October 6th our dock came in so the season is now officially over. It was only fitting that during this last act of the year a moose decided to see what all the fuss was about.

2010 was a challenging year for us on and off the water. Not only did we have our own cabin broken into and a fire in the Chinook cabin, we had to endure a closure of king fishery in early June. That aside, it was great to see many returning guests, family, old classmates, and to meet so many new people. The good certainly outweighed the bad and 2010 was definitely successful.
from Jane and I, thank you, thank you, thank you!!!!

I will continue to post on a weekly basis so please keep checking in. Have a great fall. 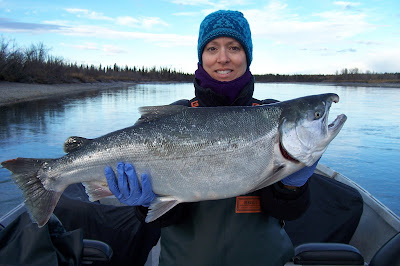 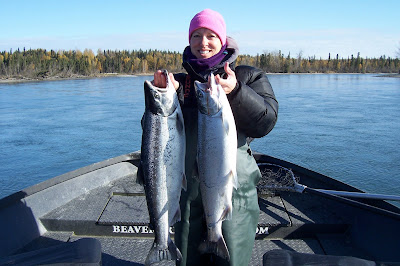 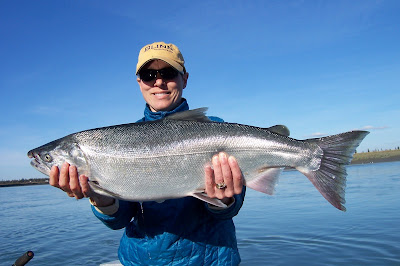 No clients this past week so Jane and I went fishing as often as we could. We would hit the prime time of the day and we caught fish every time we were out. Not limits but we did have good action. If you notice in the background of the photos above not a single boat fishing around us. This is what makes the fall magical to me. A good bite, decent weather, and spending quality time with Jane. I'm amazed that it use to be me that would ask to go fishing but now she's the one doing the asking. I've created a monster......poor me.

So, keeping with my normal format, photo one, two, and three are of Jane. The only thing to point out is the size of the silver in photo one (and also the new hat that Jane knitted). It had to be the largest silver caught in my boat over the past ten years. I didn't have a scale but I would estimate it at 18-19lbs. I did have a tape measure in the boat and it came in at 32 inches.

The dock comes out this week and so does my boat. Hopefully in between winterizing the cabins I'll be able to slip out to fish a couple of more times. It's a long time until May so I'm trying to get in all the time I can get on the river. If I don't get out and have a final fishing report I will provide a recap of the season. Let's just say it's been an interesting one on and off the water.