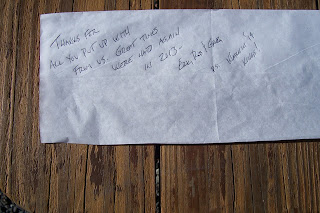 I was out on the river a couple of times this past week with my old college buddy, Eric and his friends Rob and Greg.   To sum it up, the fishing was great, the catching not so great.   This is the second year in a row that Eric and Rob have been the first on my "shakedown" cruise.  It's also the second year in a row that we've been fishless.  Apparently the experience hasn't been that bad because this was the note they left me.   Hey guys, maybe in 2014,  the "third time will be the charm!" 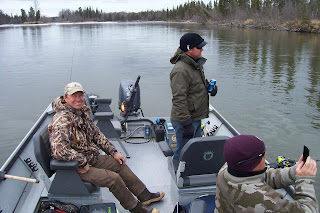 I think it was a combination of two things why we didn't get the net wet.  Number one, it's been a very late spring, in fact, the water lines froze on the cabins twice this week.  This leads to excuse number two: low number of salmon in the river.   On one of the days we were out a researcher from Fish and Game told us that one salmon had passed the sonar.   It made us feel like Lloyd from the movie Dumb and Dumber, "....so you're telling us we have a chance."  One thing we were perfect on was moose viewing.  Two days, two moose.  The photo above Rob and Greg were watching a young bull walking the shoreline.  Eric, as you can see, wanted to be ready for his photo op and could care less about a moose. 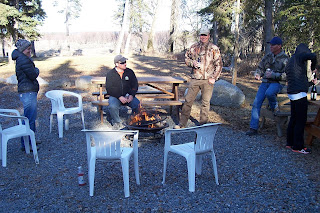 Eric, Rob, and Greg are in Alaska because they were tagging along with their wives.   Terri, Debbie, and Tara were presenting at an education conference in Anchorage.  I'm sure they had a tough time convincing the guys to accompany them.   I don't know about you but I think the three should be nominated to the "Wives of the Month Club." 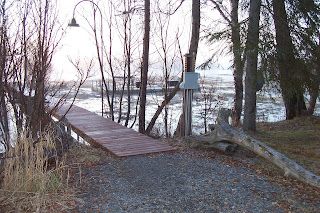 On to other things.  Saturday morning looked like the perfect tide to get the dock out.  Our friends Vern and Nancy wanted to help and I told them to come at 4:30 am.   Guess what?  What I thought was enough water to float the dock wasn't.   I  promised them if they came back Sunday morning the tide would be larger and there would be plenty of water to put the dock in.    Thanks for the help, Vern.  The extra set of hands came in handy. 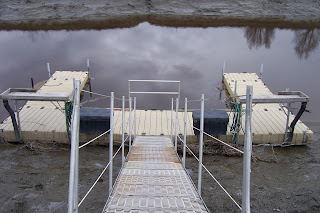 See you next week.
Posted by Beaver Creek Cabins & Guide Service at 12:17 PM No comments: 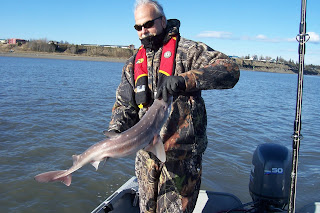 Ahhh, the first report of the season.   This is my latest "first report" ever and it's not because I didn't want to go fishing....I just couldn't.   Mother Nature has her own schedule and this was the first stretch of the season that you could actually get out (spoke too soon, there's snow in the forecast!).   My first trip came when Big Will called me up and said let's head out to the ocean to catch a few halibut.   Hard to say no to Will and to the invitation.   We didn't catch any halibut but we did catch a couple of spiny dogfish shark.   Always a blast being in the boat with Will. 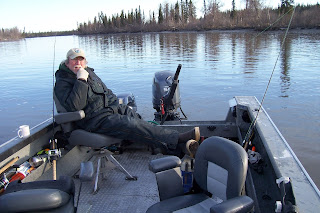 The next call came from the guy that started my guiding career on this river, Jeff King.    Jeff was the very first person to take me out fishing on the Kenai.  How appropriate that I'm out with him for my first day of fishing the Kenai in 2013.  Anyway, here he is sitting in his office; a chair he has held for more than 30 years.    Did we catch an elusive early, early run Kenai king?  Nope.  Did it matter?  Nope. 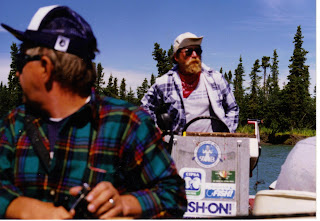 A  big reason why I like hanging out with Jeff is he reminds me of all the great times I've had on the river with my Dad.   For about 15 years it was usually just the three of us out chasing "Ol' Slimey" and making memories.  The photo above was taken in the late 80's and that's my Dad in the foreground with a young, virile Jeff  behind the wheel.   The story behind this photo is we were in the last hour of the day and my Dad hadn't had a bite yet.  He looked at Jeff and said,  "rally caps!"   Jeff didn't care that he looked a little crazy to the other guides or to the other anglers on the river.  The most important thing to Jeff that day were the people in his boat.  It was true then, and it's true today.    Good times (I miss you Dad!). 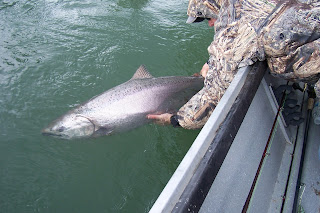 The Alaska Department of Fish and Game has announced that the early king salmon run on the Kenai will become a catch and release fishery beginning May 16th.    Keep in mind this order does allow the retention of any king salmon under 20" or over 55" inches but, in essence, it's catch and release.    Click here for additional details of the emergency order.

Just so there's no confusion, starting July 1st, the second, or late run management plan kicks in.   Although this early run emergency order will extend until July 14th, it only affects known spawning areas of the river (mostly the middle river) and not the entire river.   The areas I fish, the lower tidal area of the river, will not be affected by this emergency order change of management plans.

I've been told by Fish and Game officials that they decided to begin the 2013 season conservatively but if the run strength increases they will lift the restrictions.    This is nothing new, and something they have done in the past, so I'm okay with their decision.    After all, the fish come first!

I am in the process of contacting all my May/June clients and so far the response has been positive.   If  I haven't got a hold of you yet, be patient, I will soon.

Stay tuned to the blog; it's going to be an interesting summer....
Posted by Beaver Creek Cabins & Guide Service at 9:04 AM No comments: 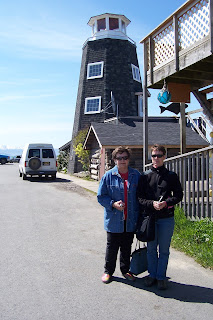 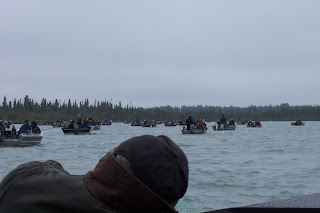 To paraphrase Yogi Berra, "the Kenai River is so busy nobody goes there anymore." 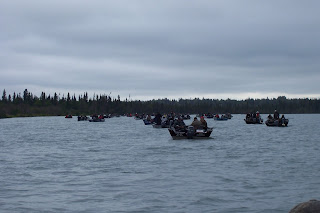 Probably my favorite way to describe fishing in July on the Kenai River to prospective clients is the river WILL NOT BE A WILDERNESS EXPERIENCE!   During the peak of the second run of Kenai kings the Alaska Department of Fish and Game estimates that there are over 700 boats a day fishing the river.   Do you still want to go?

I don't know about you but I can hardly wait to get the 2013 fishing season underway.


Posted by Beaver Creek Cabins & Guide Service at 8:38 AM 2 comments: