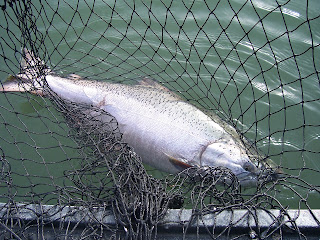 It was a tough first full week of fishing the Kenai.  Not many fish have entered the river, nor caught, so there hasn't been very many anglers out there.  This, however, will change soon once the sonar numbers begin to pick up.

We did get our first Kenai king on Friday.  A nice little 18lber that was let loose to continue its journey.  If you're reading this report, Bill, way to go.  Most of the time if a smaller salmon is released it's done early in the day.  This is because people don't want to end their day so soon and "trade up" for a better fish.  Bill, on the other hand, caught this late in the day and decided that releasing it was the right thing to do.  Again, way to go Bill. 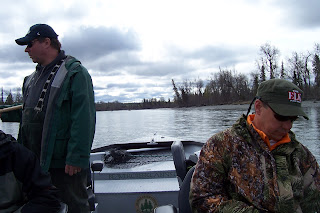 Thought I'd include a photo of my college buddies, Dan and Eric.  No, they weren't disinterested in the fishing but I just happen to snap this photo as they were letting their lines out. Lots of fun getting caught up with these guys.  Also, my apologies to Rob for not having a photo of him.  He was the third guy in the boat and Eric's friend.  Even though I didn't go to college with him, after three days in the boat I felt like I had. 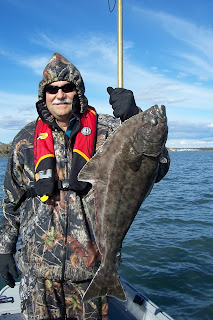 Last Thursday Big Will called and asked if I wanted to go out into Cook Inlet to fish for halibut.  It's hard not to say yes when Will calls.   Here he is holding up the largest halibut for the evening.  It's great to see Will smiling and getting stronger every day.   This past winter he was diagnosed with throat cancer and after a round of chemo he has kicked cancer's arse and is nearly full strength.  So, if you thought Will was living large before, just wait until he's 100%. 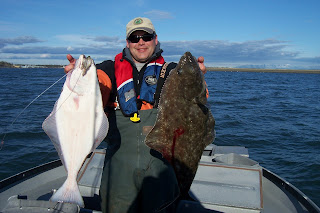 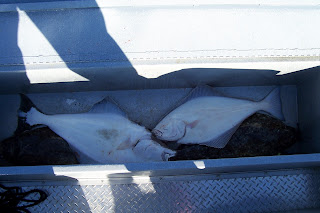 And here's both of our limits.  Not large fish by any imagination but tasty and convenient!

Tomorrow is Memorial Day.  Make sure to take a moment to reflect on the freedoms we enjoy that have been fought for and protected by those who served our country so well.

Posted by Beaver Creek Cabins & Guide Service at 6:00 AM 3 comments: 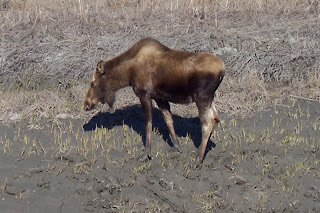 There's a reason why I'm posting a moose photo after my first official trip of the year.  No fish.

On Saturday I fished Rob and Eric, an old college buddy of mine who I haven't seen in 25 years.   It was definitely fun finding out what has happened over the years.  Of course, neither one of us has changed a bit.  Ha!

Anyway, back to the fishing.  I saw no more than seven boats on the river and did see one king netted.  In addition, I was told by another guide that they caught and released one.   We came close, our boat  managed a couple of bites, but I guess we're saving all of our action for Tuesday and Wednesday.

Hope to have a few photos for you on my next post that doesn't have four legs. 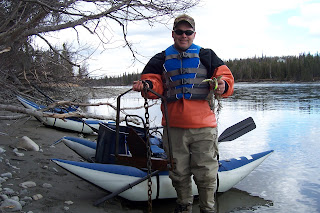 Last week I was getting a bit itchy to do my annual Kenai River salvage run.   I always feel if I don't get out just after ice out I'm going to miss out on the good stuff.  What was different about this year's float is, 1) Jane came with me, and 2) I started at Stewart's Landing rather than starting out at Centennial Park in Soldotna.  Instead of an all day float this trip would last 3-4 hours. We weren't out on the river for ten minutes when I found the anchor pictured above.  I was pretty excited, Jane not so much.   I had to explain to her that when it comes to river salvaging an anchor is the holy grail and we found one right away.   At this point I really didn't care if we didn't find another thing. 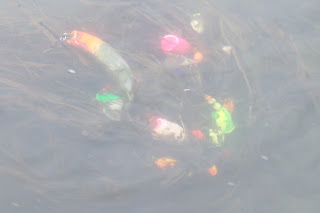 Well, a little bit farther downstream I saw a small boil on the river.  I made sure to drift near it and what I found was a ball of lures wrapped on a small log.  This photo is a birds eye view looking into the water.  Pretty easy to find when there's that many brightly colored lures lumped together. 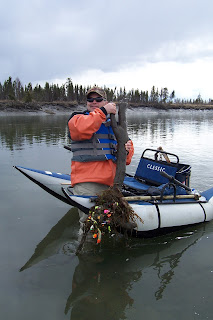 I had difficulty trying to lift the snag out of the water and it was for good reason.   At the base of the log an anchor chain and anchor were wrapped around it.  No doubt, I would have to say this was the best single find I have had on any salvage run. 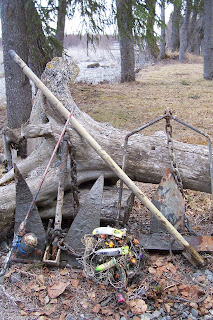 YAHTZEE!   Not a bad haul for a 3-4 hour float.   We definitely weren't too late this year and we definitely found some good stuff.

So, for all of you looking for a photo of Jane paddling down the river, I'm sorry to disappoint you.   The two things I had to promise her if she came with is that I couldn't laugh at her, and I couldn't post any photos of her in waders.   I didn't keep the promise about laughing but I'm sure going to keep the one about posting photos of her in waders......I'd like her to come again next year.
Posted by Beaver Creek Cabins & Guide Service at 10:52 AM 1 comment: 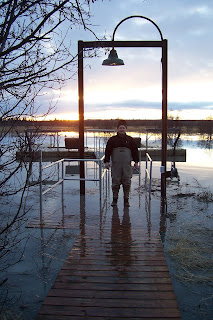 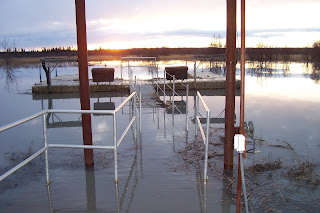 It was a beautiful sunrise at Beaver Creek.  Jane and I got up at 5:00am to catch the high tide. 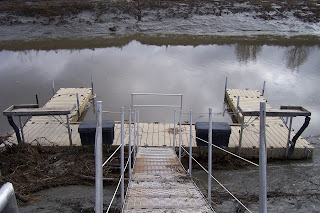 This final photo was taken around 11:00am close to low tide.   My next step is to dewinterize ( or is that summerize?) my boat and then it's game on!  I can't wait for the 2012 season to begin.
Posted by Beaver Creek Cabins & Guide Service at 7:47 PM 2 comments: 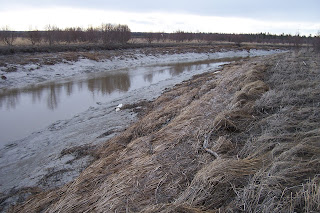 As you can see, we still have a little bit of snow on the ground.

The good news is the creek is now ice free.  We have a large tide cycle over the next couple of days so the dock will be going in.  As soon as the dock goes in the boat will be next. 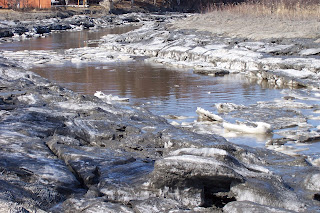 This photo was taken a week ago.  This was just as the ice was breaking up. 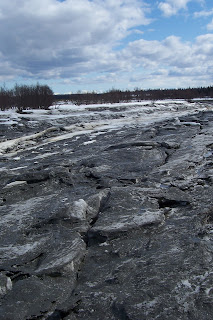 This photo was taken two weeks ago when the creek was socked in ice.

Posted by Beaver Creek Cabins & Guide Service at 11:25 AM 1 comment: