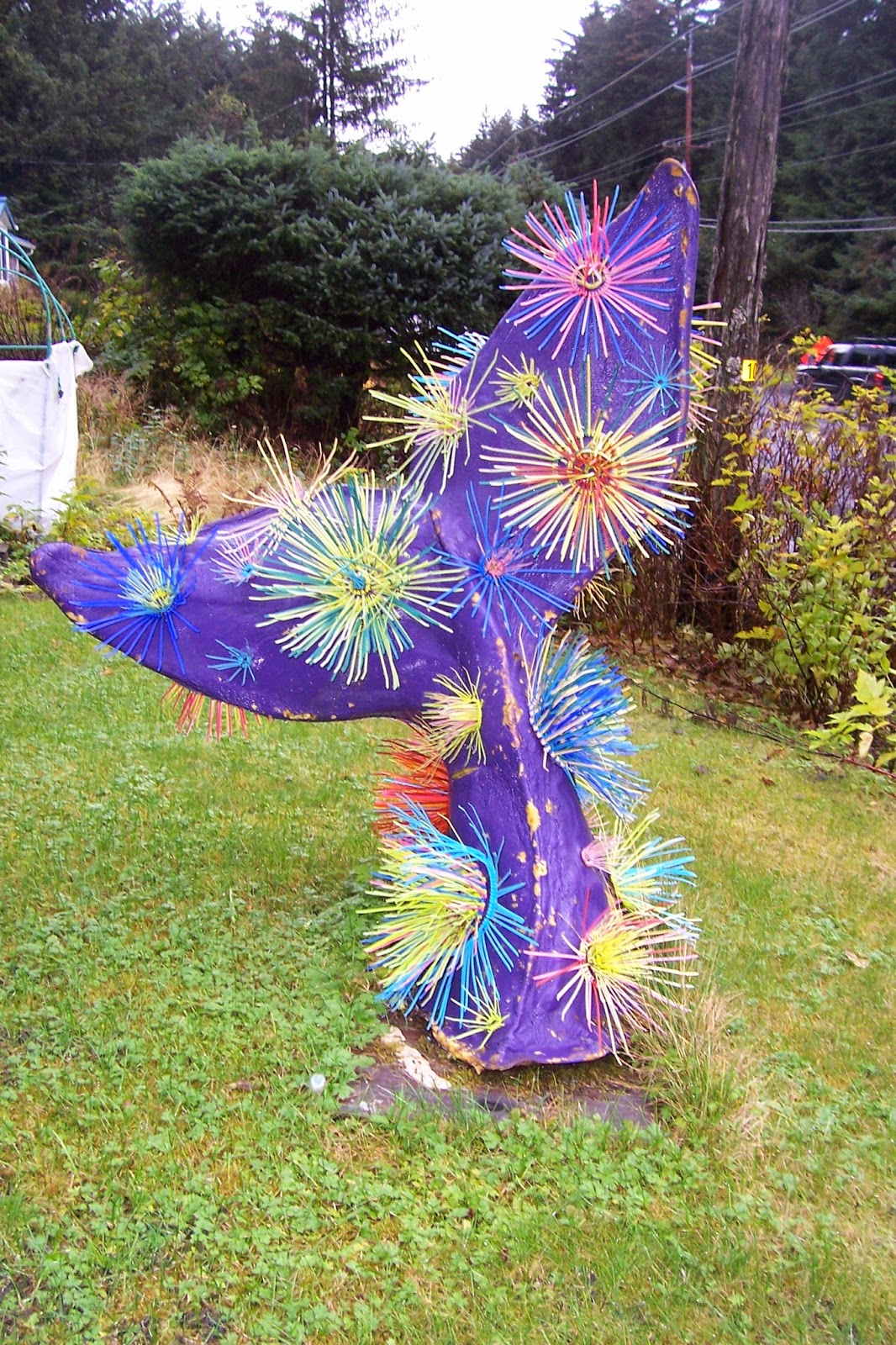 Proudly displayed in Mark Stopha's front yard is this whale tail.  When I asked Mark about it he said that he liked the aesthetics of it but the real reason it's there is that it serves as a giant middle finger to the Department of Transportation.   What use to adorn their yard was a white picket fence.  The powers to be said the fence, which had been there for more than 20 years, was in the right of way and could distract drivers as they passed by.  Mark's wife Sara said, "I'll show you a distraction".  And that is how the whale tail ended up where it is.

Check for the government.  Checkmate for Mark and Sara.

Posted by Beaver Creek Cabins & Guide Service at 10:18 AM No comments:

After taking a year off, Jane and I decided to go back to the St. Cloud Sportmen's Show.  The dates are February 6th-8th.  It was a tough decision because the sport show in Madison looked intriguing and would open us up to a new market.   But I guess it came down to familiarity.   Kinda like anchoring up in a favorite fishing hole.  It just feels right.

If you would like free tickets, drop us an email at beavercreekcabins@yahoo.com.   Tickets are limited so when they're gone, they're gone.   For show details, click here.

Hope to see you there.


Posted by Beaver Creek Cabins & Guide Service at 8:11 AM No comments: 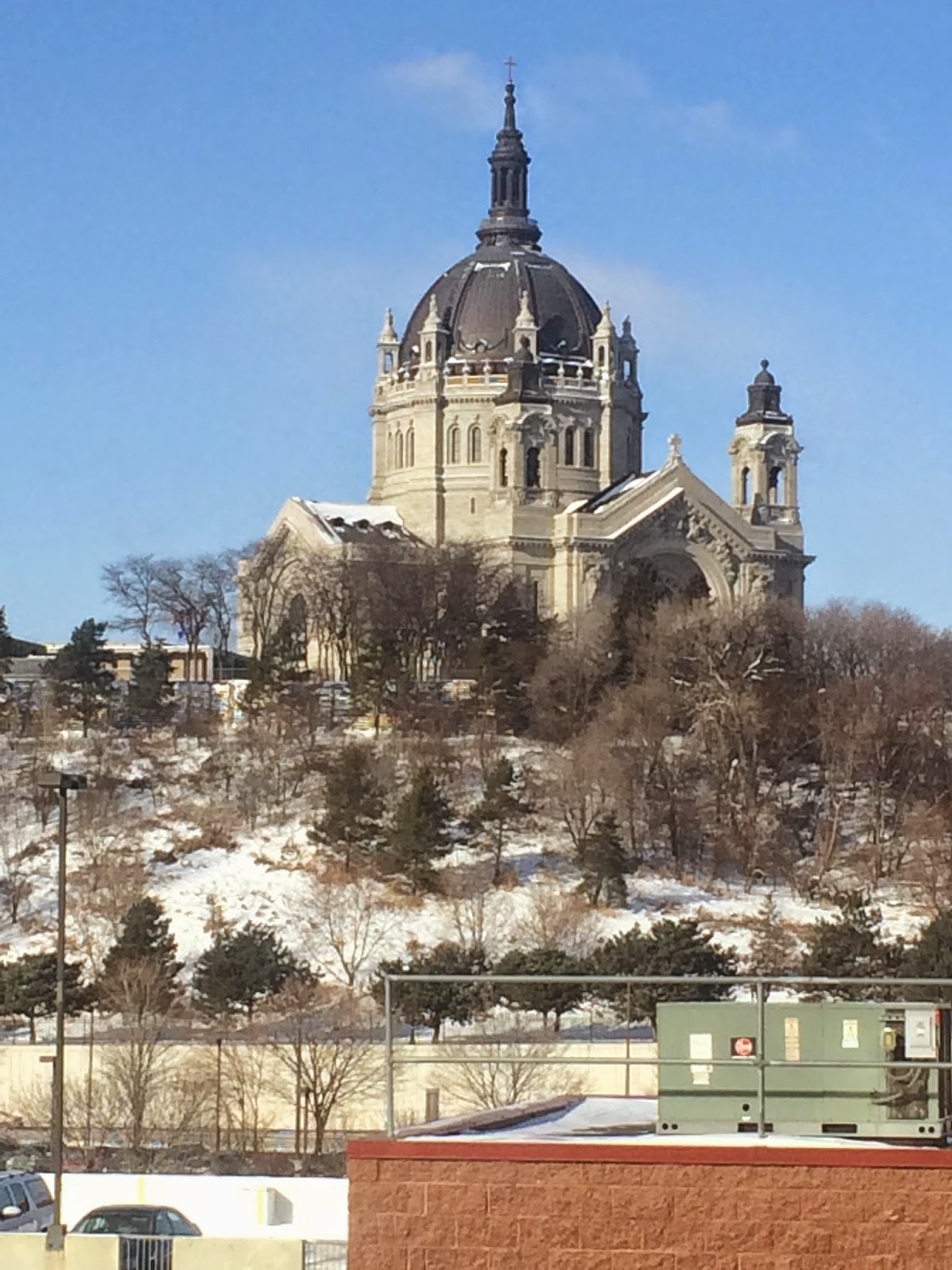 It was good to be back in St. Paul, Minnesota.   The show went well, but there were a few challenges. Two professional hockey games were played next door (this makes finding a parking spot difficult), a day of terrible weather in which 654 traffic accidents were reported, and a broken escalator at the show.   That being said, the attendance held it's own and we were happy to talk all things Alaska. 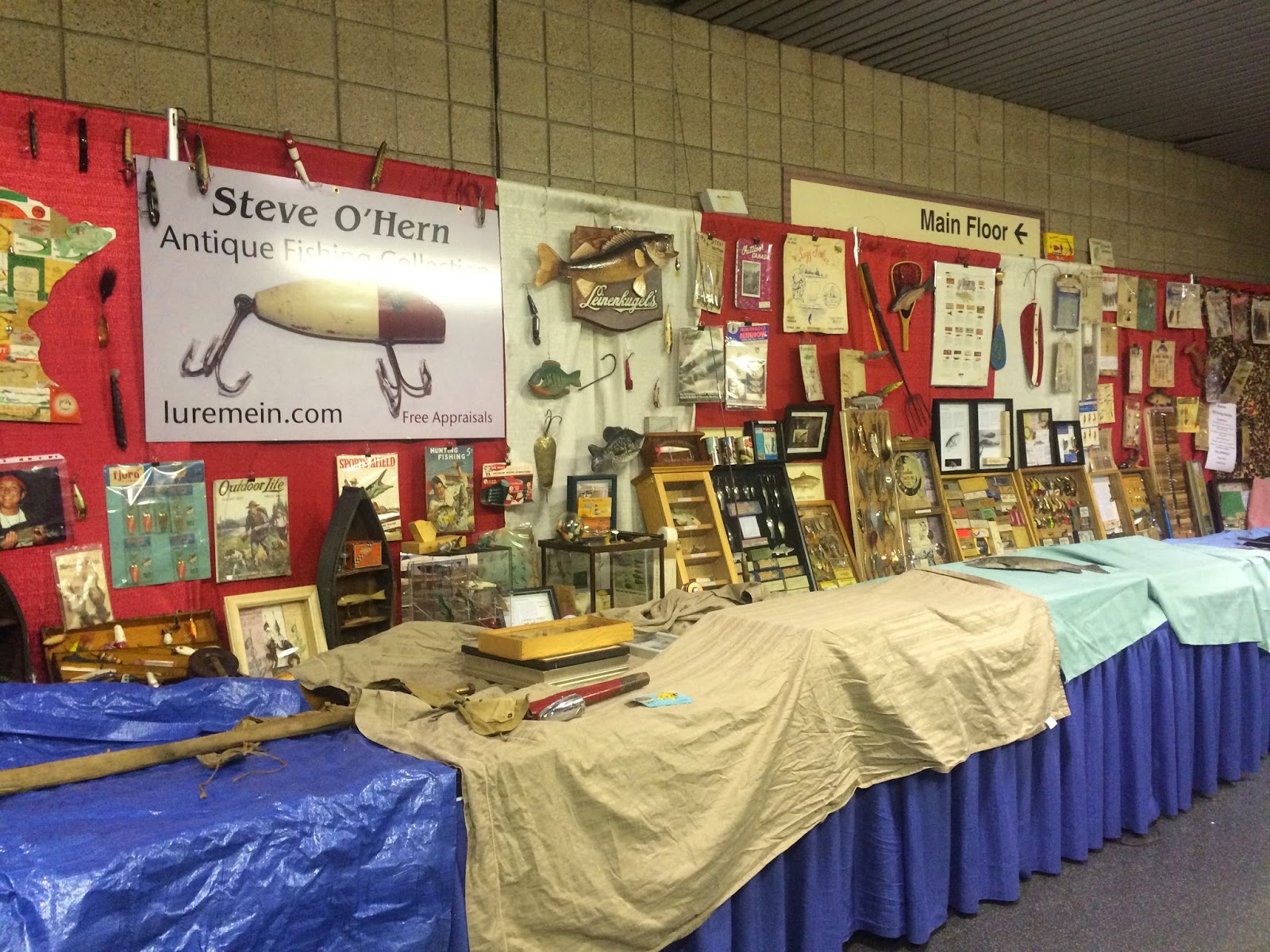 At the sport shows we attend, I always like to highlight vendors that I think are interesting. This booth was close to ours and every day I would stop to look over the antique gear.  I'd get a little nostalgic because many of these lures I either used, or would see in the tackle boxes at my Uncle Dean's house.  I'm finding it hard to believe that the stuff I used as a kid is now considered "antique". Am I really that old?   Don't answer that, please. 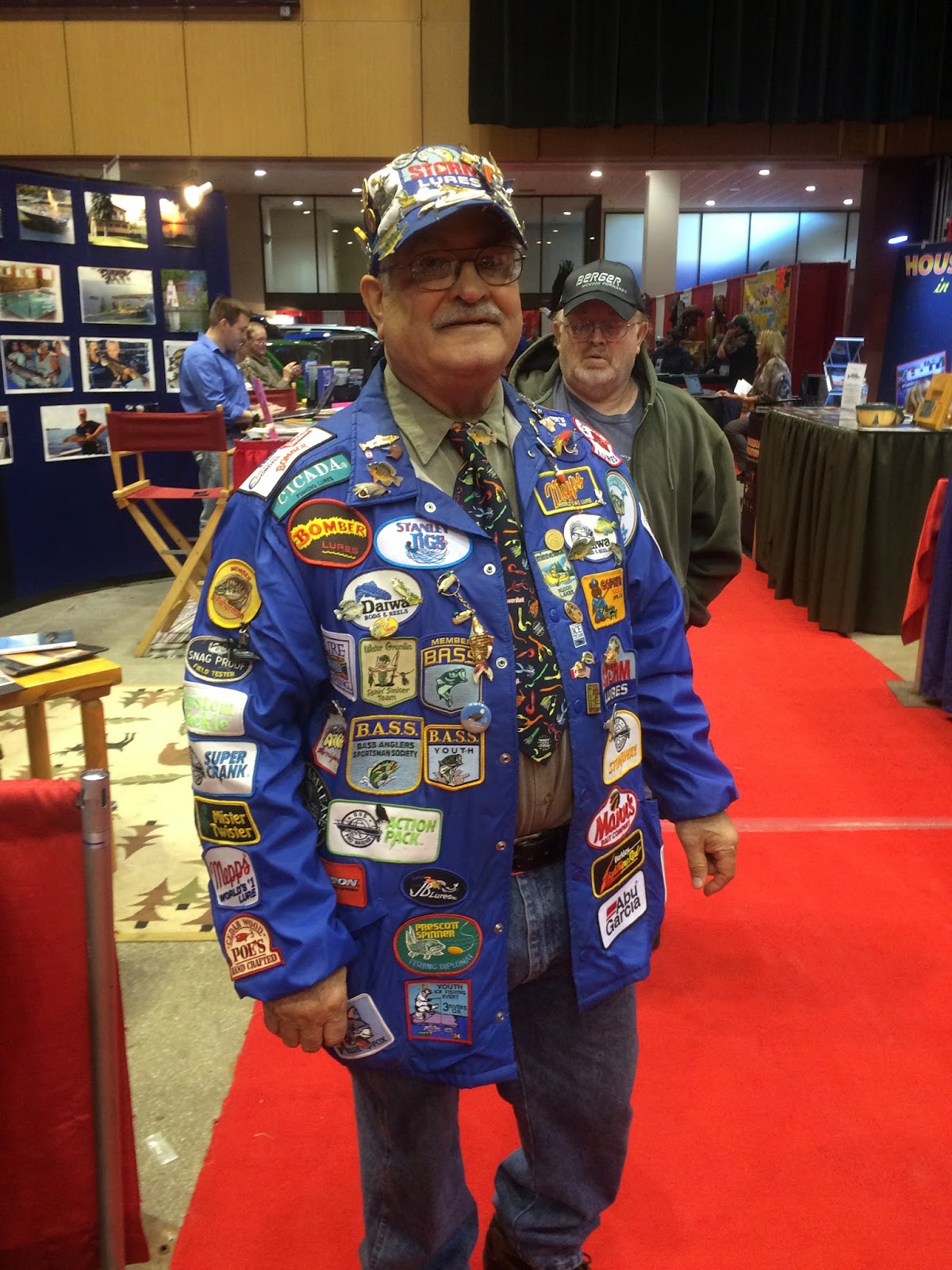 Speaking of Uncle Dean, when I saw this man walking the aisles I had a flashback to the '70's.   I stopped him and told him I would like to take his picture.  He gladly obliged and I explained to him that when I was a kid my Uncle Dean had a coat just like his.   I told him I liked it so much that in a 7th grade home economics class I made a vest and sewed a bunch of fishing patches on it so I would look just like my Uncle.  It was a sweet vest, but my sewing skills were not that great.  If I remember correctly, my teacher gave me a B-.   This grade was strictly on my sewing skills, but I bet she would have given me an A for style.... 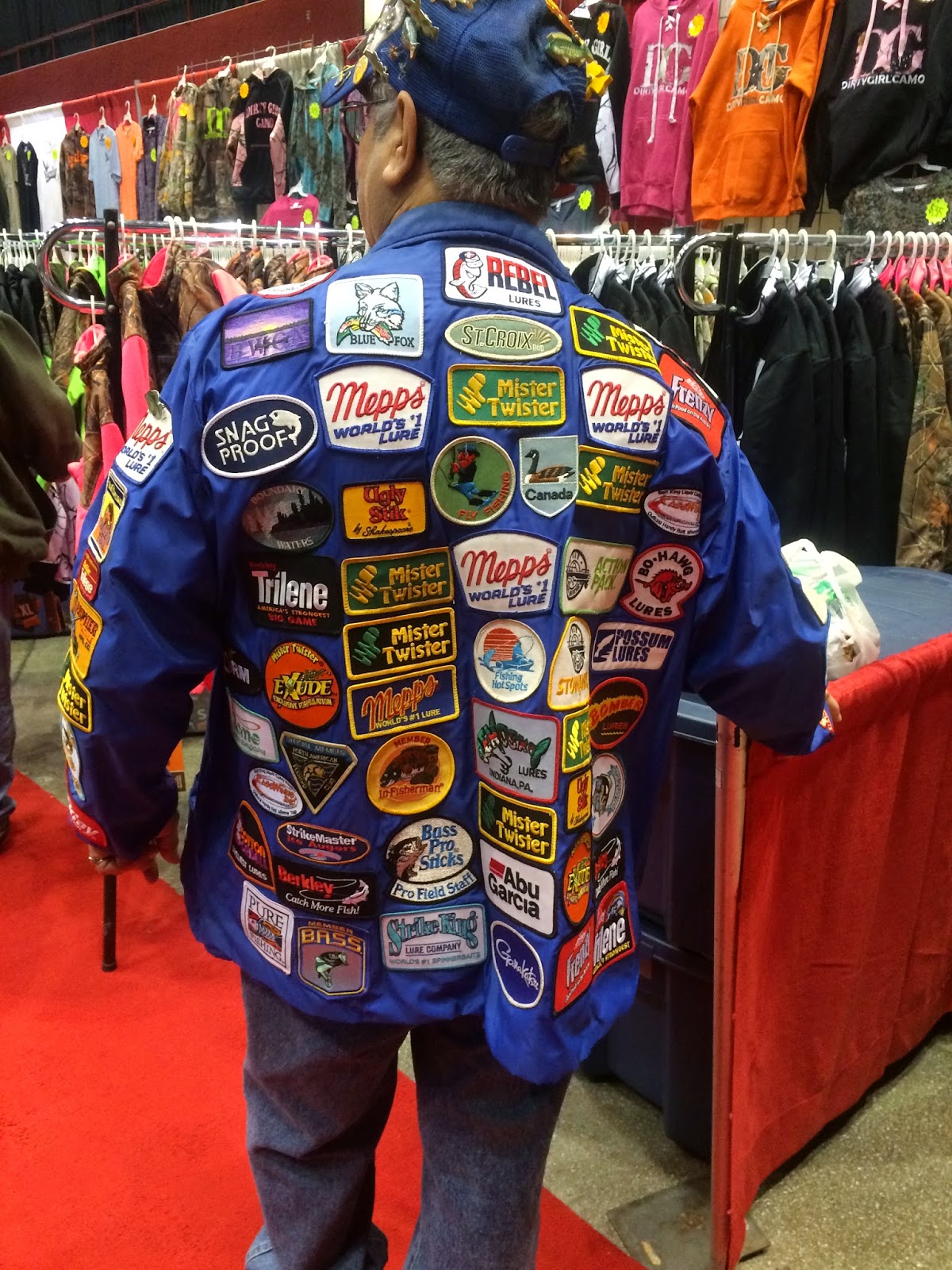 Dude is definitely making a fashion statement in 2015. 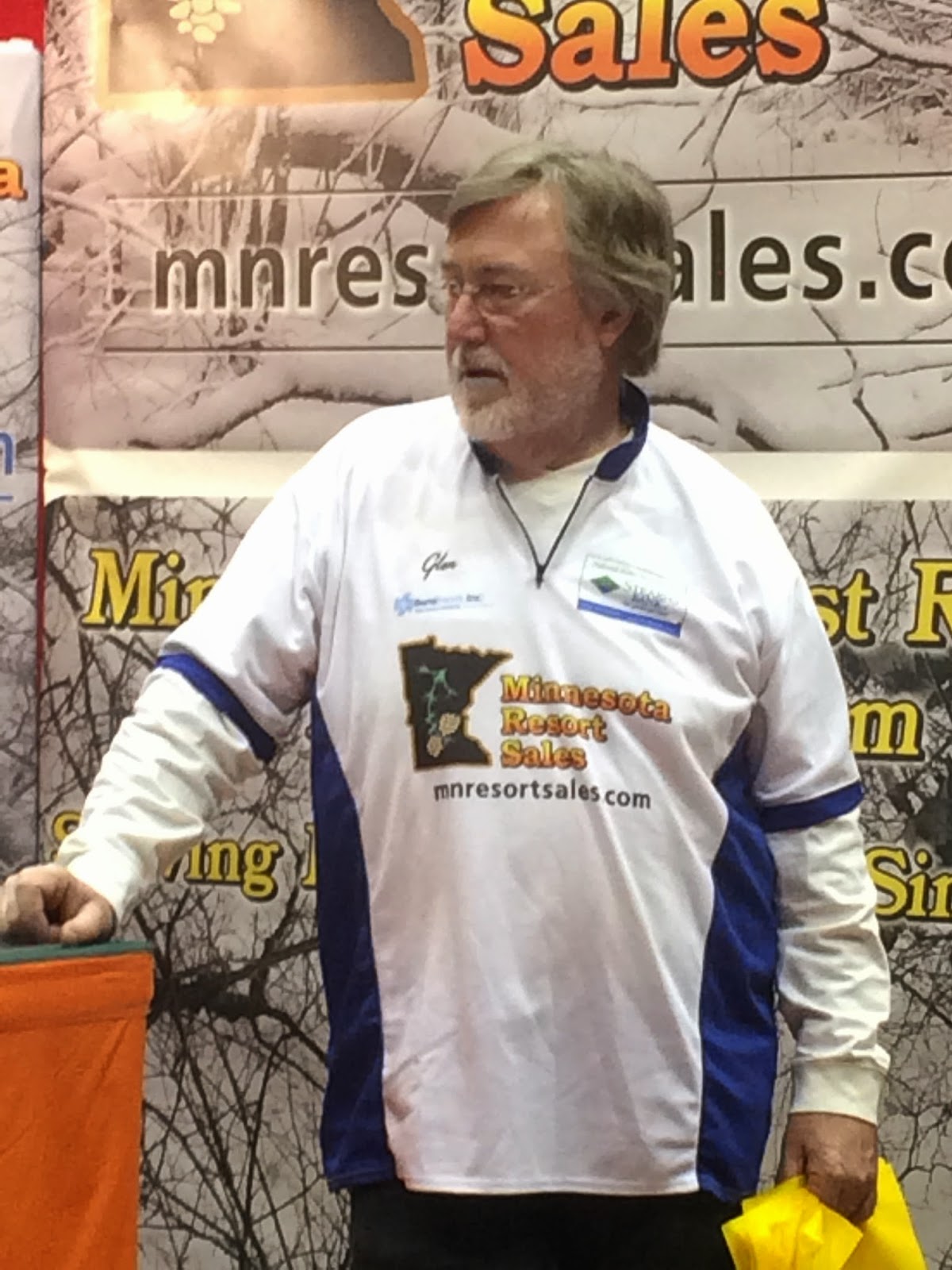 I was also glad that my Kenai fishing mentor/friend, Jeff King, took a winter break from fishing on the beaches of Mazatlan to join Jane and I at the show 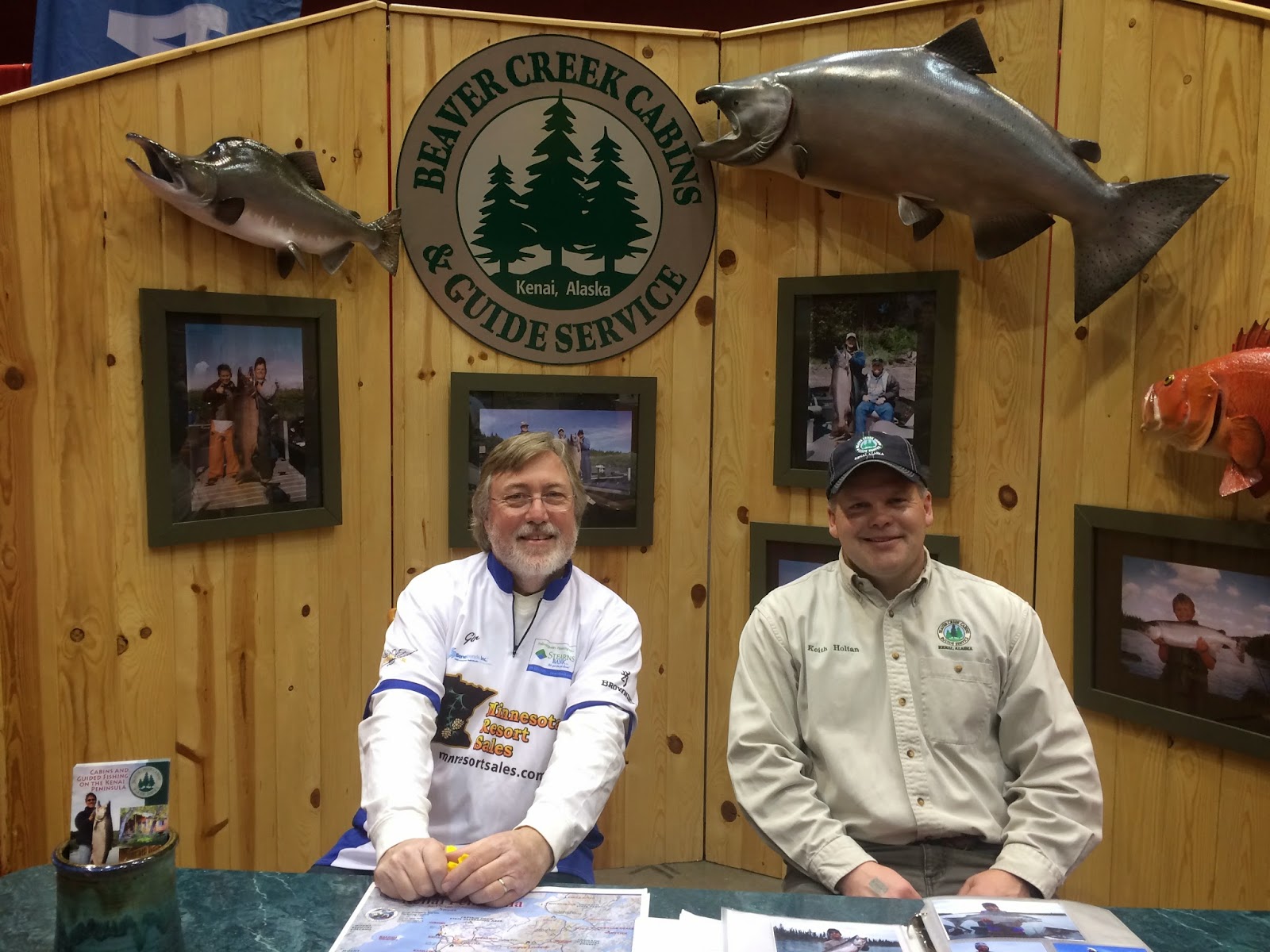 Now how could you pass up booking an expertly guided fishing trip by these two guys?

I'd be remiss if I didn't mention the friends/guests that found their way to our booth.   I can't list them all (my brain is mush after 4 days of doing a show), but I have to single out Dave Anderson (who found our booth without us being there, go figure), Peter Medchill (wish we had more time to visit), Fred Glidden (like the the postman, he'll make the show whether rain or shine), Lorry (Dave's buddy), Bob Paule (best conversationalist in the world), and Lance Anderson (vying for the title of Dad of the Year).

Because of the success of this show we will be adding another one. Were debating between Madison, Wisconsin, or St. Cloud, Minnesota. When a decision is made I will be sure to post the details. 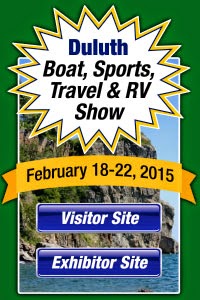 The 2015 sport show season is right around corner and Jane and I will be in St. Paul, Minnesota from January 8th-11th, and Duluth, Minnesota from February 18th-22nd.  If you would like details of the St. Paul show click here.  For Duluth click here.

We are contemplating a couple of additional shows. If we do add more I'll be sure to let you know the dates and locations.

As always, we have a limited amount of free tickets available. Drop us an email if you would like them.  It's a first come, first serve situation and when the tickets are gone, they're gone.

Hope to see you in St. Paul, Duluth or both!


Posted by Beaver Creek Cabins & Guide Service at 7:03 AM No comments: