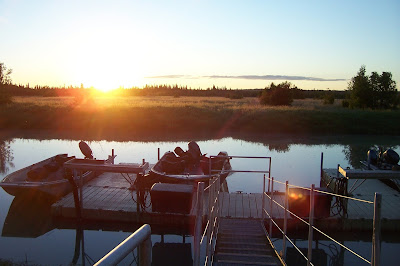 Life's simple pleasure for this fishing guide is being the first one on the creek and watching the sun rise.  It's this calm moment before my work day begins that centers me for the rest of the day. 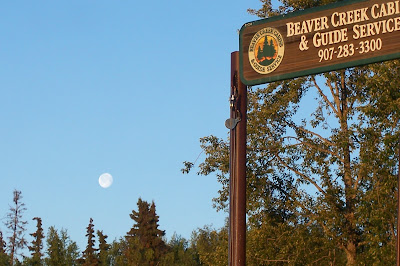 And, what a week we had of great sunrises. Not to be out done was this moonset at 5:00am. It's not often I get to see this. 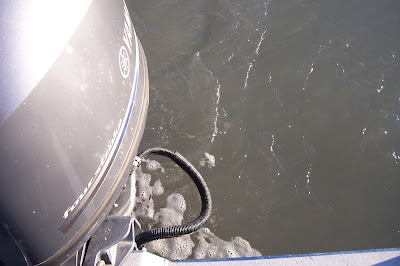 When a fisherman talks about the weather, or celestial sights, you know that means the fishing was not good. I was scheduled for three trips this week and, unfortunately, I either called it off an hour into it, or I outright cancelled it. Why?  The Kenai River is running high and dirty.  The telltale sign is if you can't see your prop, the fish won't see your lure. I wish the conditions were better but the ethical thing to do is cancel the trip. At least there were other fishing alternatives to the Kenai River, and all my clients went and did other things. 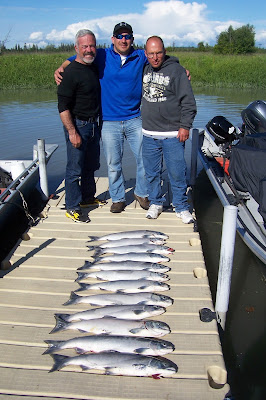 A few of our guests went to Homer and fished the lagoon for king salmon (with success).  And some went to the Russian River to fish for red salmon. Overall, the Russian River run has been slow this year and may never materialize. You couldn't tell by the day that Ron, Ben, Esko Bill, and Debbie (not pictured) had when they went there. 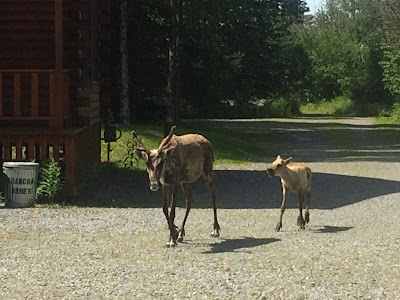 This was exciting.  Jane and I were talking in the front yard and coming up our driveway were these two. It's not often that we have walk up inquiries, but this mamma caribou and her calf sure liked what they were seeing.... 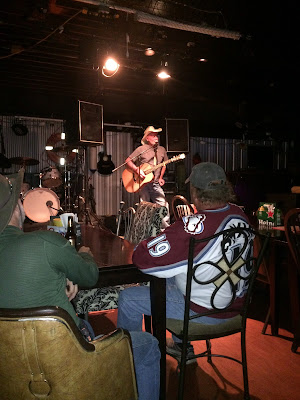 I ended this fishless week by taking in a Hobo Jim show with my friends Eric and Holly Taylor. They have heard of Hobo Jim, but they've never seen him perform. As always, on this night, Hobo did not disappoint.  I'm truly amazed at the energy this man has at the age of 64. It seems like he would be at a point in his life where he would slow things down a bit (well, he doesn't do the epic all night, break a leg falling off a table, gig like he use to do at BJ's).  But no, he still cranks out a high energy show five days of the week. He's truly an Alaskan legend.

A quick side story about Hobo Jim before I finish this fishing report. When I first started guiding on the Kenai, one of the oldest and most respected guides on the river, Chick Kishbaugh, offered me these words of advice.  He said, "Hobo Jim has saved more bad days on the river than anybody. The sooner you can get your clients in to see him, the sooner they'll forget about not catching a fish."  It was true then, it's still true now.

For the week ahead: I've got a few trips scheduled, but if the river doesn't turn the corner and start subsiding, I'll probably end up cancelling them. As I stated earlier in this post, it's the right thing to do when the river is blown out....see you next week! 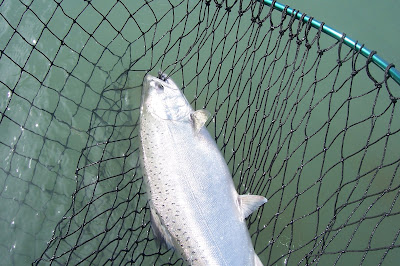 First off, Happy Father's Day to all the dad's out there.  I know today I'm going to celebrate the memory of my father by going to the Dairy Queen and ordering a pineapple shake.  It was his favorite flavor and by coincidence it's my good friend George French's as well.

On to the fishing report.  My first real trip of the year happened on Thursday. Beaver Creek regular Rob Hunsaker came with his son Jarred, and four other friends.  Only a few trolls into our morning, Max had a hook up at the Toilet Hole. 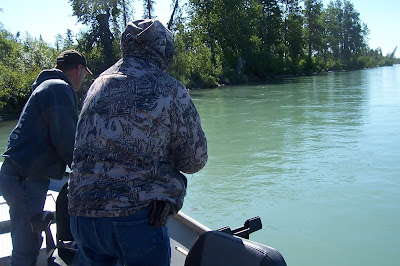 After a nice little fight.... 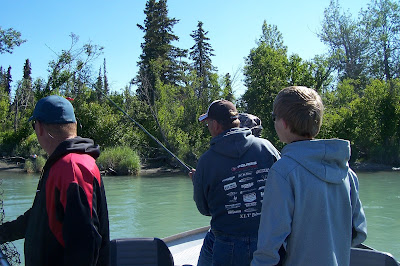 ...and with net in hand, the barbless hook came unbuttoned alongside the boat.  Not a bad way to start off a morning.  Unfortunately, after trolling all over the river for the rest of the day, that was the only action we had.  Thanks guys, for a great trip, and for great attitudes. It was a nice way to start off the guiding season for me. 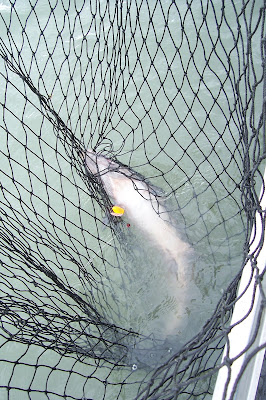 The big news for the week happened on Friday when the Alaska Department of Fish and Game announced that the early run Kenai king escapement goals had been met and they were reopening the river to retention of king salmon on Saturday, June 18th. I was guiding Debbie, Bill, Don, and Ben on Friday and Saturday and they were excited to have the option of actually keeping a king salmon to eat.  On Friday, the fishing was okay. Debbie hooked into a fish on our first troll but we lost it at a net lengths away from the boat.  Not too long after that Bill fought a fish, but it too came off just as the leader became visible.  Finally, Debbie did get a fish to the net and it was gently released to continue it's journey to the the Promised Land. 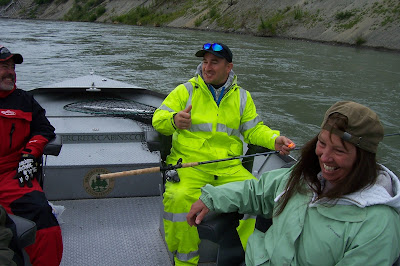 Saturday was an interesting day. With retention, the boat traffic on the river increased tenfold.  I figured we would see quite a few fish being caught, but somebody must have told the fish that they could be kept on this day. Where the heck were they? When the day was done I saw two fish landed, and one was in our boat.  Our only action came just before noon. It was at that time that Ben decided he would eat a banana in the boat (matching rain clothes helped seal his fate); much to the chagrin of a few superstitious fisherman in our boat.  A short troll later he catches a king. Since there were several hours left in our day, he decided he would sooner fish than not fish, and released it. Good on ya, Ben!  That, however, was the end of our action.  Sorry, Ron, for no bites in two days, but as you kept saying, "hey, that's fishing."  Thanks guys, for your patience, and for ending my week on such a positive note.

What's on tap for the week ahead?  I do have a couple of trips on the books. Come back next week to find out how the Kenai treated us. 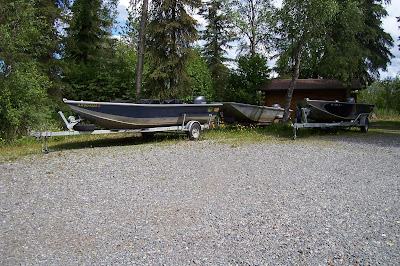 With the reopening of the Kenai River to king salmon fishing on June 4th, it was time to clear out the boatyard.  It goes without saying that I'm one happy guy. 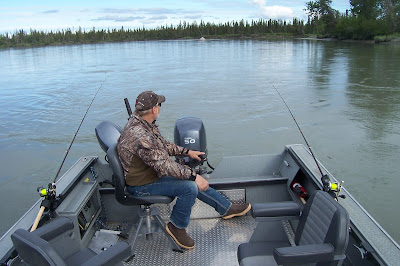 Eric "the only man to propose marriage in my boat" Taylor bought Phil and Debbie Dreyer's boat last fall.  He's had a long winter and spring dreaming about the first day launching it on the river. This past week his timing was perfect for the both of us; I wasn't busy and there were virtually no boats to get in our way. I'm glad it came together because there aren't many things more stressful for a first time boat operator than to venture out on the Kenai the third week of July. 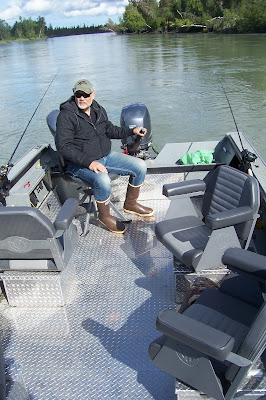 Over the years, Eric has spent a lot of time fishing with me and other guides on the river. He knows the etiquette, but it's a whole different deal when you're the guy running the boat.  So, to get comforable, we spent each day "running channels" trying not to find gravel bars (we didn't).  We also backtrolled a few hours. Heck, we even gave backbouncing a shot. One of the most valuable skills we practiced was beaching the boat without dinging up the prop. This is a very critical skill when red fishing.  It's not only embarrassing to do this wrong, it could end your day of fishing. 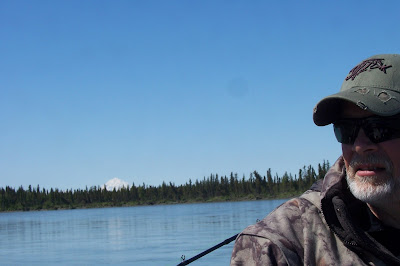 We enjoyed great weather, saw lots of wildlife, but unfortunately never had the opportunity to see a king (we saw red salmon jumping, though).  Landing a fish will be a skill I hope to practice with him when he gets back next week. 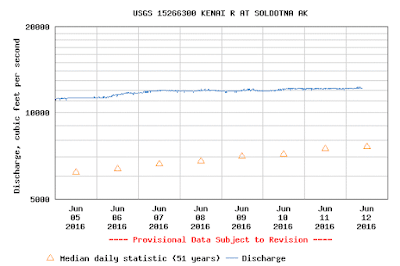 So, why was the fishing slow?  Above you'll see a gauge of the water flow of the river. If you compare the blue line, which is the current flow, against the triangles below, which is the 51 year daily average, you can tell the river is not normal. In fact, it's high and dirty. That's a poor mix when it comes to catching fish on any body of water.
The water has been improving daily and from what I've been told a few fish were caught on Saturday. I had every intention to be out there, but a broken water pipe in a cabin took priority. I'm glad it happened now because I would really hate for that to happen the third week of July.

Finally, other waters to report on. The Russian River opened yesterday.  The report is it's still early, but with patience and luck a limit could be had.  The Anchor River is still fishing well.  The Kasilof has been a little hit and miss lately.  The ocean, well, it's the ocean, and limits of halibut are the norm. The only question is what size are the halibut.

So, that's it for now. See you next week!

I've contacted our guests coming to the cabins and most are on board for a fishing trip.  That being said, I've got quite a few seats available, so if you have the itch for CPR fishing (catch, photo, release), I'm your guide.....