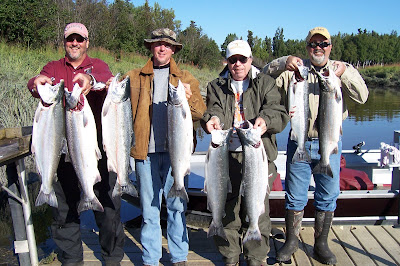 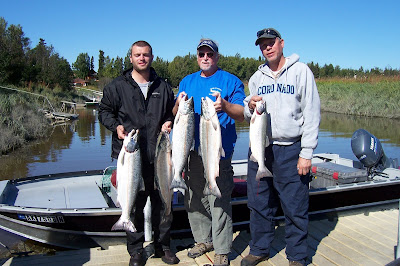 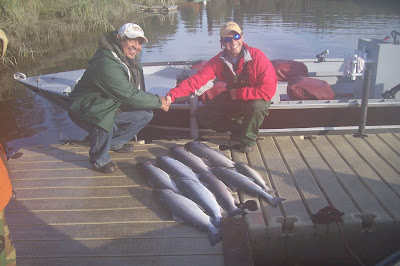 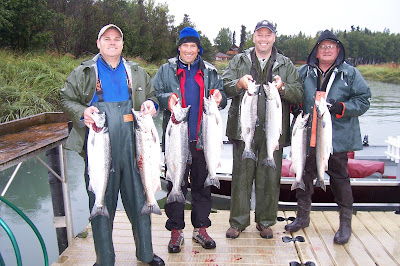 The sun came out this past week and the silver fishing continues to be very good. A couple of changes I've noticed is that pink run is over and the amount of seals chasing fish has increased tenfold. Most fish caught at the end of the week had seal scratch marks on them. I'm hoping there are plenty of fish for all of us in September.

Jane and I were sad to see Gary Blinn and Team Blinn 3 leave. I'm pressed for time to wax eloquently about their time here so stay tuned for a future post about the "Blinn Experience" and what exactly happens over a three week period.

Photo one, two, and three are from Team Blinn 3. Photo four is Phil and the gang back at the dock in time for a hot breakfast.
Posted by Beaver Creek Cabins & Guide Service at 12:37 PM 1 comment: 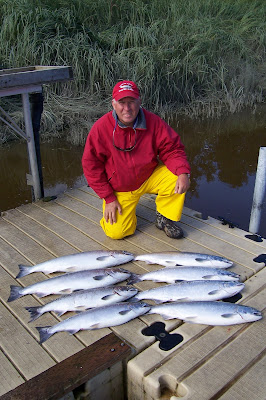 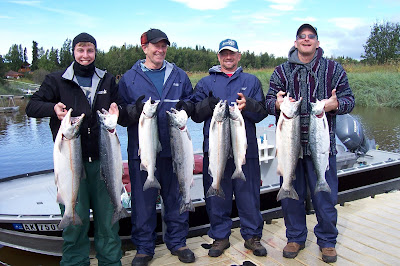 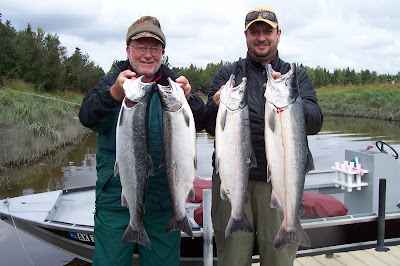 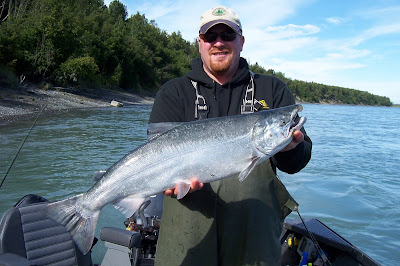 Another very good week of fishing except for one day with Team ABC on Saturday. Granted, we caught all the pink salmon we wanted on that day but the silvers were a bit elusive.

The top photo is Steve Morris posing with the days catch. Photo two is Team Sinclair. Photo three is Will and Brian. The final photo is Jeff of Team ABC holding up one of three nice fish for the day.

Jane and I went out fishing today and the bite continues to be strong. Hope it continues for the week ahead. This last bit of information is for Dan. Area rivers are just starting to pick up so your timing should be spot on.
Posted by Beaver Creek Cabins & Guide Service at 6:14 PM 3 comments:

Silver Fishing Is On Fire!!!! 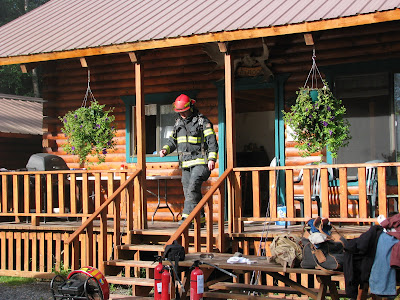 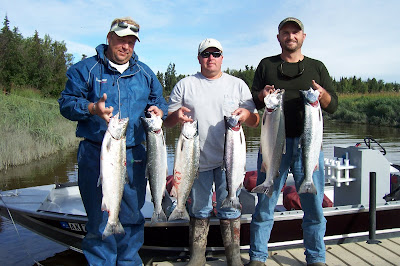 A full report will follow in a few days but the fishing was on fire on 8/18. Mac, Ken, and Sam were out with me in the morning and we ran into a pretty good school of fish. We catch our last one at 9:30 and decided to head back to the cabins. About 50 feet from the dock I get a phone call from Jane and she frantically yells "the hot water heater is on fire, I got to call 911". I didn't know if she meant our own cabin or the Beaver Creek Cabins. I gun the boat to the dock and all four of us start to sprint towards the cabins. We see smoke bellowing out of the Chinook cabin and Jane is running into the cabin with a fire extinguisher. I grab the closest extinguisher I can find and Mac, Ken, and Sam head into the cabin with Jane. I wasn't far behind but the last to enter. When I get into the cabin we are all in the kitchen/utility room area using all the available extinguishers. Mac, thinking quickly shuts off the gas line leading into the hot water heater. Just as we get the flames out the Kenai Fire Department showed up and made sure that there were no flare ups. Ulitmately we came to the conclusion that the thermostat was stuck and would not shut off. It burned a hole through the floor of the cabin but did not burn anything else. I called our plumber friend who came and installed a new hot water heater within hours and Mac, Ken, Sam, Reese, and Joey all stayed in the cabin that night. It still smelled a little smokey but they said it added to the Alaskan adventure.

How lucky can you get. If Jane wouldn't have been in the cabin cleaning and if we didn't get our limit in short order, the Chinook cabin and the office/freezer room would have been up in smoke.

Sooo, after everything settles down we go back to the dock to snap a few photos of the fish. I can't say enough and can't thank these guys enough for being in the right place at the right time and not hesitating in a crisis situation. From left to right is Mac, Ken, and Sam. Thanks again guys, definitely heroes in our book.
Posted by Beaver Creek Cabins & Guide Service at 2:44 PM 8 comments: 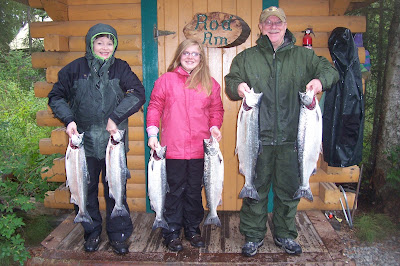 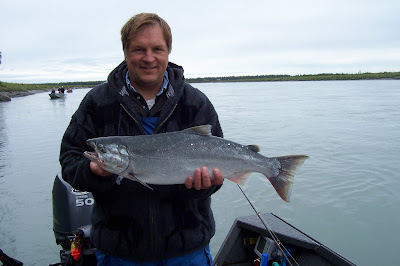 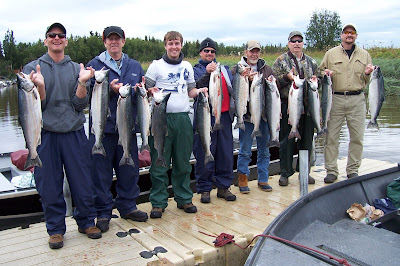 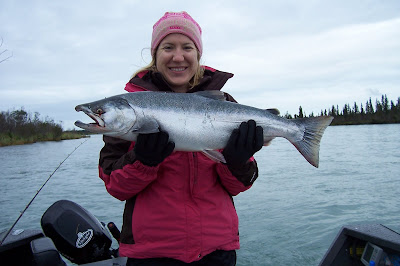 Another great week of fishing with the Blinn Group #1 providing all the action and entertainment. The pink salmon fishing was constant and the silver fishing was up and down but consistent throughout the day.

Photo number one is Team Haskins which consists of Rebecca, Lily, and Joe. After a week of Alaska fishing Lily became quite skilled and accomplished at reeling in salmon and halibut. Photo number two is John who put in a lot of time to catch a silver. Photo number three is Team Blinn #2 which consists of John, Vernon, Ryan, Jim, Al, Orville, and Randy. Missing is Steve Morris and I'll make sure to get a photo of him during the week ahead. The final photo is Elizabeth with one of her many silver salmon that she caught this past week. I saved Elizabeth's photo for last because on the final day she caught a huge humpy and when it came to the boat she said. "that's not a hump, that's a mountain!"

Stay tuned for a report from the Blinn #2 group at the end of this week.
Posted by Beaver Creek Cabins & Guide Service at 5:44 PM 1 comment: 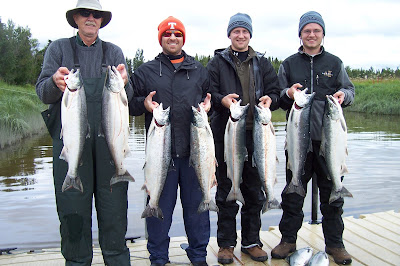 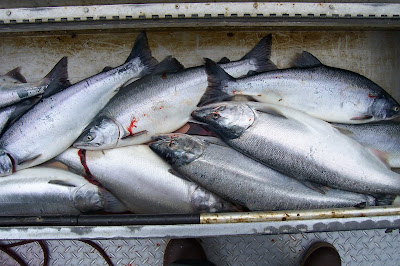 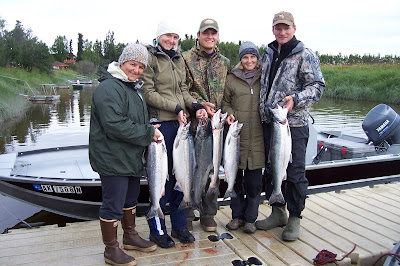 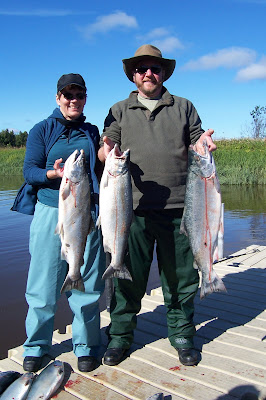 The silvers are definitely in. The pinks are in as well and will only get crazier as the month goes by.

I have a mandatory day off tomorrow and it's going to be hard to wait for Tuesday morning. 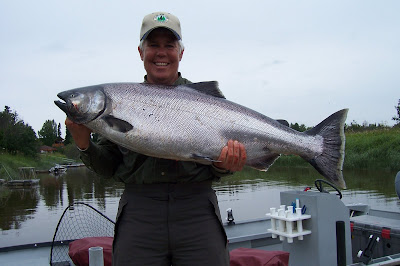 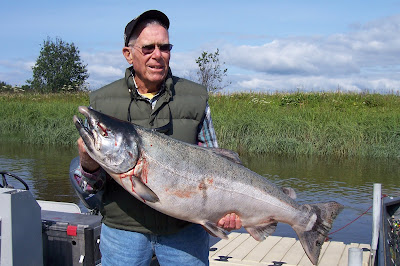 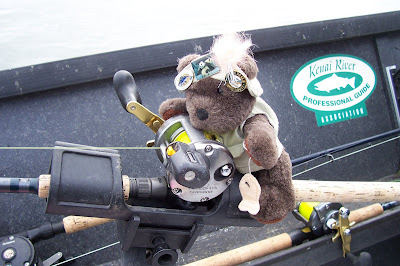 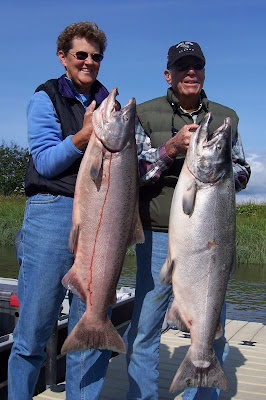 The 2010 Kenai king salmon is officially over. We had some good "catching" days and not so good "catching" days but the fishing was GREAT. Thanks to all of you who joined me on a trip or two on the world famous Kenai River. Sharing this river with so many good people is what makes it easy for me to get up every morning at 4:00am.

The last week of the season was fun for me because I was fishing full day trips with Team Oregon and Team Canada. Team Oregon consisted of Karen, Peg, Karen, Susie, and Ray. Team Canada consisted of Jim "aka Fuzzy", Kirk "aka Cut Plug", Ty "aka Fortuneless Fortune Cookie", Rocco, Rick, and Jake. For Team Oregon let's just say I may have to have a bag of cheetos and Orvis the Bear on my boat every season. Now to the photos. The top photo is Karen with her beautiful king salmon. Photo two is her dad Ray. The next photo is the good luck charm Orvis. Photo four is Susie and Ray with a couple of nice kings that where taken on a day that we actually had sunshine.

I suppose you're wondering where the photos of Team Canada are. The boys had been to Seward before they came here and they had over 700lbs of fillets to go back home with and decided that their Kenai trip would be about fishing and not keeping. It was kind of nice to release fish on the river and have surrounding boats applaud us for doing so. Wish I would have taken a few pictures of their fish but I find when we are on catch and release mode I don't want to stress the fish any more than I have to. Overall the numbers of fish released did not match their 2008 trip, but they still had a great time.

One last note, yesterday I took Kathy, Peg, and Lou out for an experimental day of pink/silver fishing. We casted spinners behind a few islands and caught quite a few pinks, a couple of dollies, and one silver. It should be a good start to the new season.
Posted by Beaver Creek Cabins & Guide Service at 12:11 PM 5 comments: