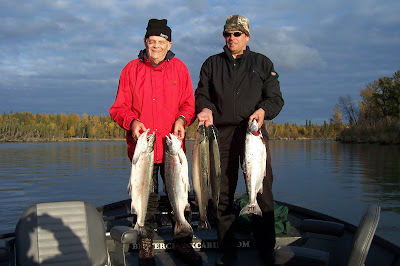 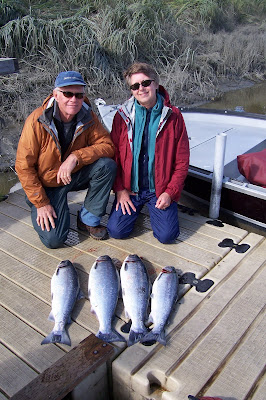 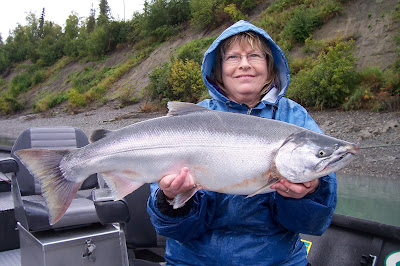 The thermometer read 27 degrees this morning. We are definitely in our late fall/winter pattern.

This past week I only had a couple of trips on the river and I'm glad to report that the fishing has been good. The top photo is Team Finland which consisted of Ollie and Aarno. I wish my grandmother could have been in the boat that day to serve as an interpreter. Ollie actually had a very good command of english so the day wasn't full of hand gestures and exaggerated facial expressions. Photo two is a late posting of Cliff and Val with a couple of fish that they kept (sorry for the delay). They had a very good morning and let go close to a dozen fish before calling it a day. The final photo is Sue. Wow, what can I say about this photo. Sue's smile absolutely captures the moment.

My guiding season officially ended this past week with Team Finland. This doesn't mean that I'm through fishing the Kenai for the year. The dock and my boat will be in until October 6th so look for updated reports of Jane and I trying to catch a couple of fresh fish for dinner. 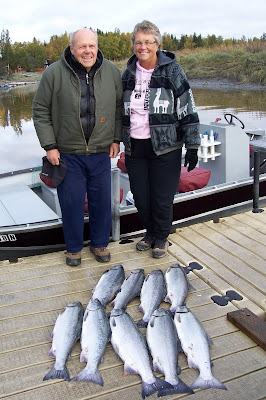 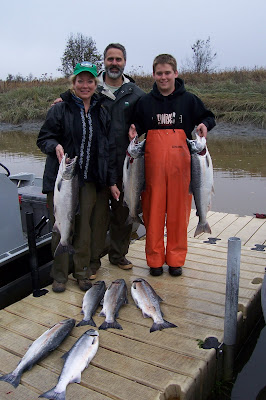 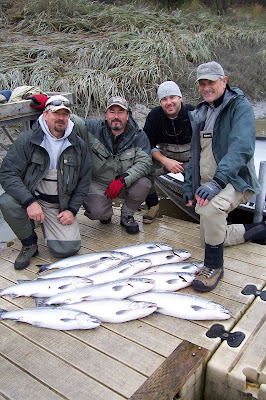 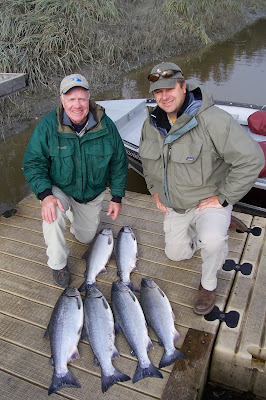 Well, the weatherman was partially right this week. Clear skies in the afternoon and evening but thick fog every morning. It made things a bit tough getting out to my favorite spots. No complaints from anyone about the slow boat ride or about the lack of sunshine because the fishing was very good once again.

The top photo is Carl and his lovely bride Mary with a stack of fish. When they jumped in the boat they told me that they aren't fisherman. Could have fooled me. Photo two is Team LaFlamme (Kim, Todd, and Alec). Let's just say there is never a dull moment when they're around. Photo three is Team Northern California (Tim, Steve, Todd, and Brian). These guys are fly guys but managed to work in a day on the lower river for silvers. They weren't disappointed. The final photo is Dan and Mark. They too are fly guys who worked in a day of silvers.

It looks to me like the weather and the fishing should hold out for awhile longer. We are nearing the end of our season and do have openings so if you're still interested in coming you should make plans as soon as you can.
Posted by Beaver Creek Cabins & Guide Service at 3:07 PM 2 comments: 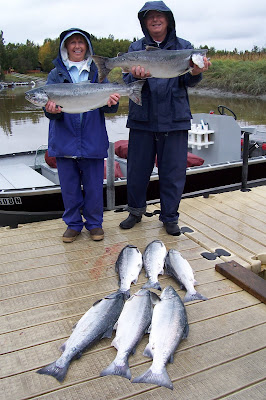 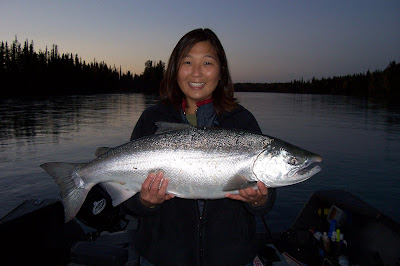 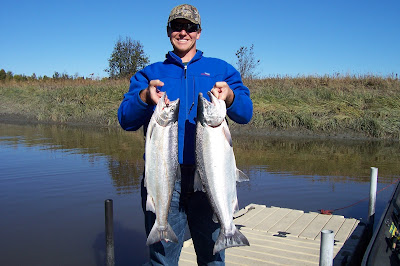 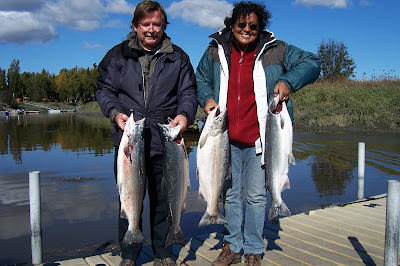 Wow, what incredible weather we're having. The forecast for the next five days is sunny with temperatures in the mid to upper 60's. By far the best stretch of weather the entire season. If there is a downside to the bright skies is that silver salmon are extremely sensitive to light. What this means is if we don't catch all of our fish by mid morning the bite drops way off. We still manage to catch fish as the day wears on but not as many as during the low light hours. Overall this past week fishing has remained steady and I'm hoping it continues until the end of the month.

The top photo is Dan and Mary Meyer. Jane and I always feel like our season is about over when these two leave. Great fishing and great company during their stay. Now if I could only stop eating Kit Kat bars.....Photo two is Mira with a gorgeous 14lb silver. Photo three is her husband Zach with a couple of beauties. The final photo is Team UN. Arlene (Trinidad) and Thor (Norway) were a blast to have in the boat. After visiting with Thor I can definitely tell I'm of Norwegian descent.

If you're coming to fish this week make sure to bring plenty of warm clothes for the morning and your sunscreen for the afternoon. 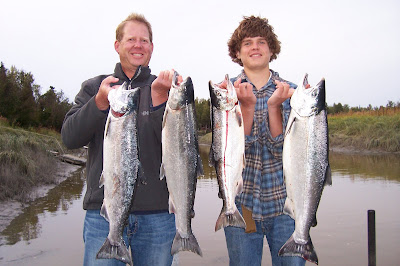 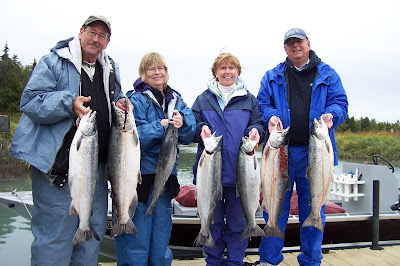 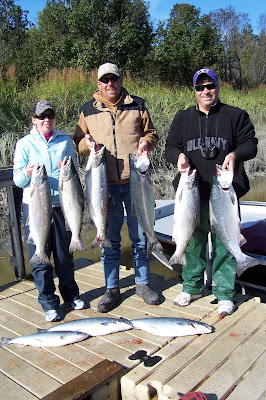 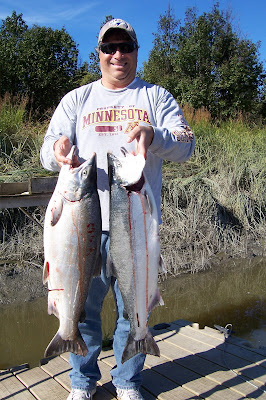 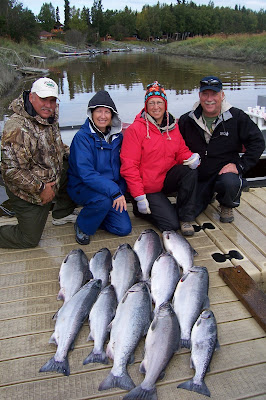 On September 1st the limit for silvers on the Kenai increased from two to three. We limited out nearly every day and when we didn't it was because it was decided that we had more than enough for the fish boxes heading home. Overall, the fishing hasn't been red hot but it has been very steady. This makes for a wonderful day on the water.

If you have followed the blog over the past couple of years you will probably notice that a few of these faces look familiar. Photo one is my favorite fishing buddy, John Ohlin, with the all too familiar Lars, his son. If you notice, Lars has grown a lot through the years but one thing that hasn't changed is his hair. Mickey Dolenz would be proud. Photo two is Carrol, Sue, Mary, and Dan with a nice haul of silvers. Photo three is Robyn, Aaron, and Al with a limit. Photo four is Al "The Polish Hammer" in another photo with a couple of dandy fish. Just a side note, Al is from Minnesota and we both went to college together at the University of Alaska-Fairbanks. I haven't seen him in over 27 years so it was nice to get together and get caught up. We definitely plan on not waiting another 27 years to see each other again. The final photo is Team Tautges and Team Crow posing proudly with their limit of fish.

All in all, Jane and I really had a great time this past week visiting with some old friends and making a couple of new ones as well.

p.s. The leaves are starting to change. I hate to say it but fall is well under way.
Posted by Beaver Creek Cabins & Guide Service at 4:21 PM 3 comments: