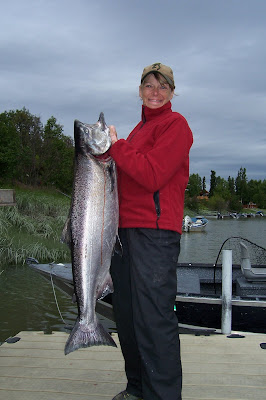 It was the best of times, it was the worst of times. The best because I'm guided a lot of friends but the worst because the king fishing was not as expected for this time of the year. As far as I can tell there were two factors that kept the catch rate down. The first was the low numbers of kings entering the river. The second is that the river is at flood stage due to rain in the mountains and the increased melting of the glaciers that feed into the Kenai. This has produced high and muddy water, a bad combination for fishing.

The few fish that were caught include Sarah, Dave, Ursula, and Adam. In addition, there is a photo from the halibut trip that Jane had taken with the Sporrer/Johnson/Dawson group. A definite positive this week is the red fishing with most groups limiting out daily. Also, the minus tides produced great clam digging for many of our guests. 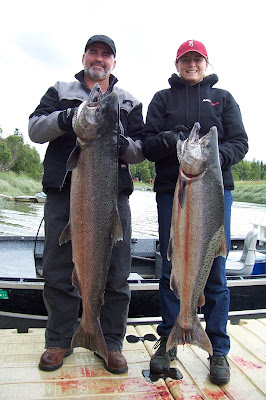 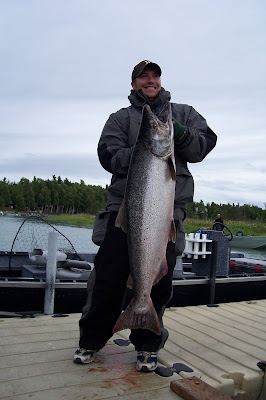 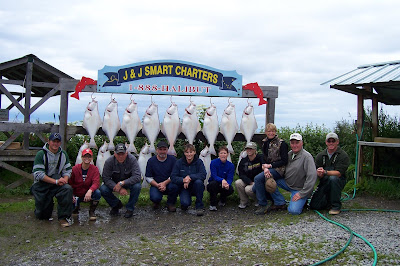 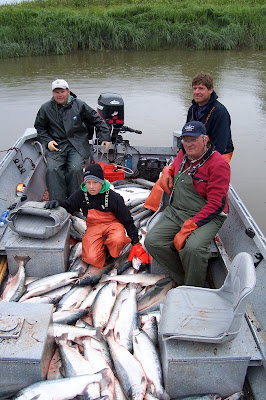 As you can see we are knee deep in the run of red and king salmon.


Overall, I would say the red fishing has been great and the king fishing has been good. At the beginning of the week I personally saw my largest king ever. It wasn't in my boat but landed in a boat next to me. The hawg of a king was measured, photographed, and released. It was 58 inches long and had a girth of 34 inches. It was conservatively estimated at 90.5 pounds. Conservation of large fish is often talked about by guides but until the moment hits you and it's hard to say how you will react. I was glad to see such a large fish released to once again help populate the mighty Kenai River.


Here's a recap of the photos. Photo one is Tim, Eli, Phil and I after a morning of dipnetting. Photo two is Joe Schnitzler with his first Kenai king. It took him four attempts to get his prize. Photo three is Ed Stamper and Daisy 3 Irons with a couple of dandy fish. Photo four is of Derek, Joe, Ed, Ron and Rick with their daily limit of red salmon. Photo five is Debbie and Jason with a pair of 50 pounders. Photo five is Collin with the quickest king to the boat this year (sitting in his seat without a rod by 6:11 am). Photo six is Phil and Don showing the success of their early morning trip.


Stay tuned, the fishing should only get better. 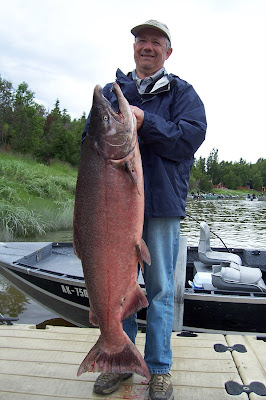 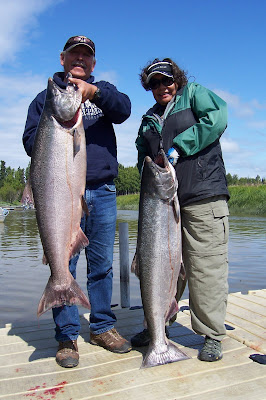 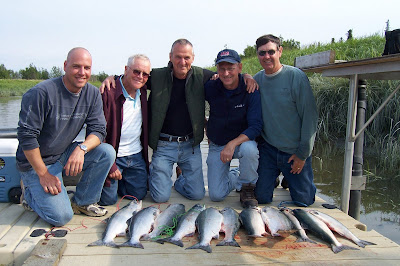 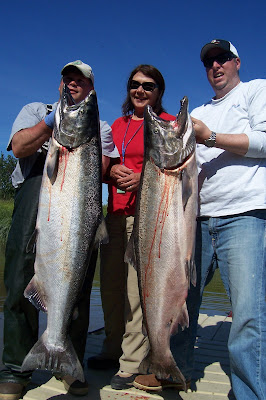 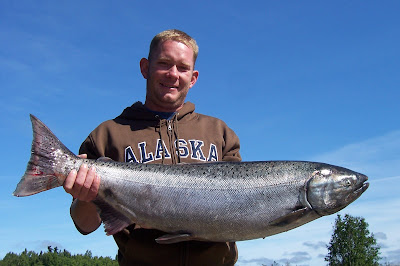 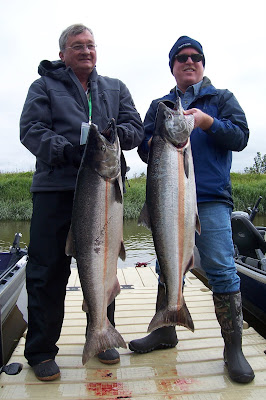 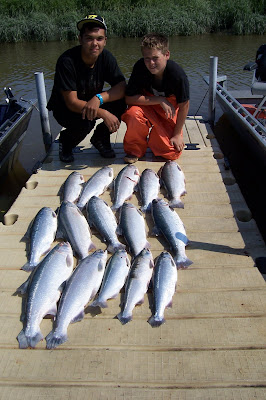 I'm glad to report that the fishing this past week has been exactly as it should be. We're still between runs which means the size of the king salmon have been all over the board. The good news is that we've caught fish every day but not necessarily every trip. Also, for you fans of red salmon the second run is just starting. 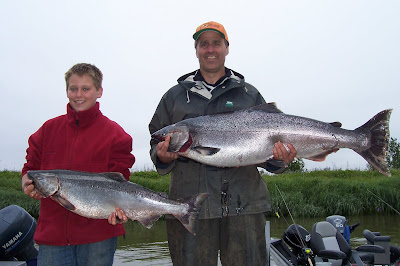 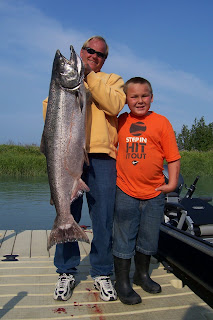 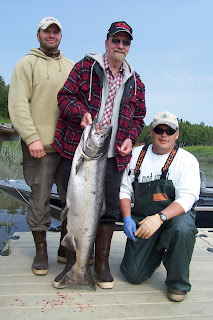 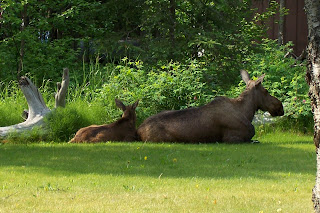 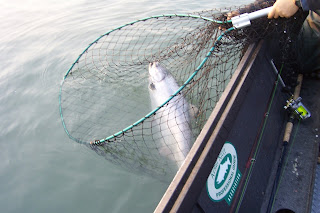 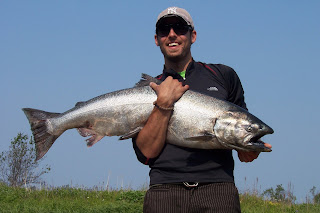 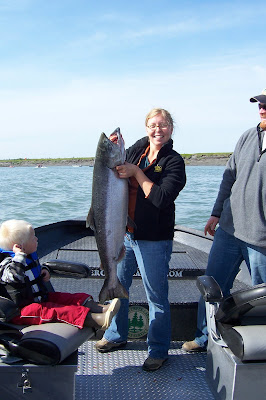 Happy Birthday America.
What a difference a week makes. I'm happy to report that the Kenai is finally back to it's old self again. All week we had multiple fish days with a typical mix of the "between the run" king salmon. What that means is that we got some big fish, some medium fish, and some small fish. We also caught a red salmon and a flounder as well. Alisa (top photo) was skunked last year but you can tell by her smile that this was the year for her first king salmon. The other photos are of released salmon.
If you're still thinking about putting together a king salmon trip I do have seats available between now and the closure at the end of the month. The way July has started it looks like the rest of the season should be a good one. 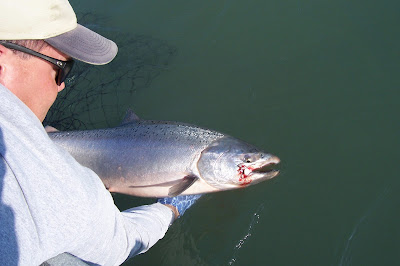 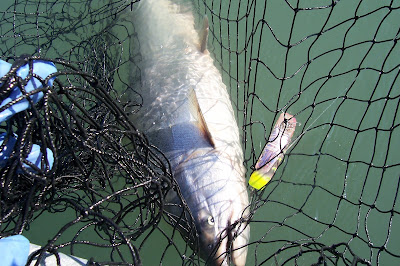 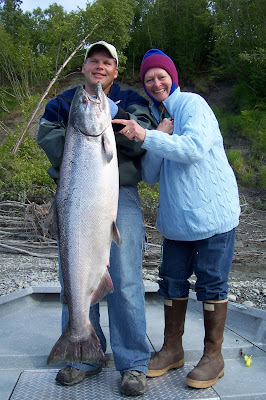 I don't have much time to write but I thought I would get these photos on the site as soon as possible. What a difference bait makes. The two fish we kept were 44lbs and 48lbs. I'm holding Ms. Dorothy's fish (she got even) and Jane is holding up her own fish. I'm proud of the fisherwoman that Jane has become. Not too many years ago she would worry that she didn't know how to hold the rod correctly and she wouldn't even think about touching a fish. Quite the Alaskan for sure. One quick comment about Ms. Dorothy, she said that was her first king that she has caught in 32 years of living in Alaska. I'm sure glad I was there to be part of her achievement.
Let's hope July continues to be as good as the first day. 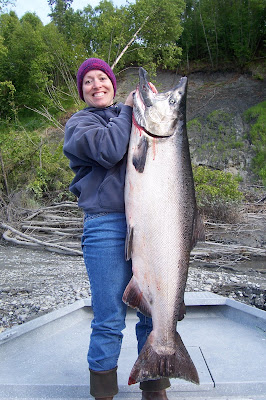