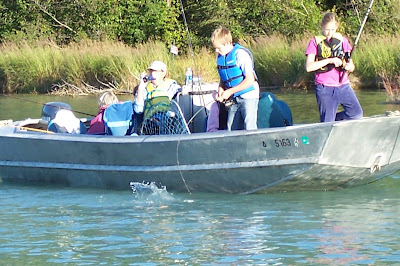 Do you like catching fish until your arms fall off? Do you like betting your buddies to see who can reel their lure in WITHOUT HOOKING A FISH? Take a look at the action that's going on in this boat. I watched these guys hook pink after pink all afternoon long. Dad didn't even attempt to fish because at all times there were one, two, or three fish on. What a show they put on and what a great dad for taking the family out. 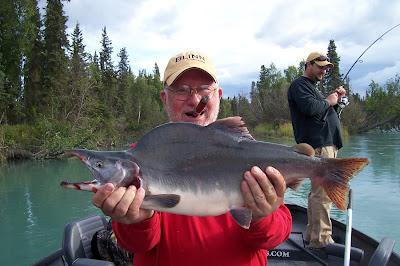 So, why the bad rap? Well, it has to do with table fare. An ocean fresh pink grilled up after a day on the water is very good. However, when you freeze the fillets of a pink salmon the quality disappears. Based on the photo above do you think Will Robertson cares about that? It's all about the action, baby, all about the action.

As a fishing guide I can not fish with my clients so when my guiding day is over I like to go out in the evenings with my friends and chase a few pinks and silvers. Often this is a time when I try different lures, different techniques, and different areas to help me be a better guide during the day. It's a time that I often step out of my comfort zone and do things completely different. In my opinion, to experiment with my clients is unprofessional and when I'm hired for a fishing trip I want to be using proven techniques on proven spots. I feel this way because of an experience that my dad and I had many years ago. We hired a guide to show us how to catch walleyes in a lake we had never fished before. He tied on our lines a jig with a Bass Pro Shop salted plastic grub worm. It seemed a bit odd for walleyes but we trusted our guide because we felt he "knew what he was doing" and didn't question his choice. After a couple of hours and no fish he said that this was the first and the last time he'd try a jig and grub for walleyes on this lake. After that we switched over to more traditional live bait rigging and finally caught a few fish before the day ended. Much of this day was wasted because he wanted to try something new. Lesson learned: I will waste my own time but not yours. 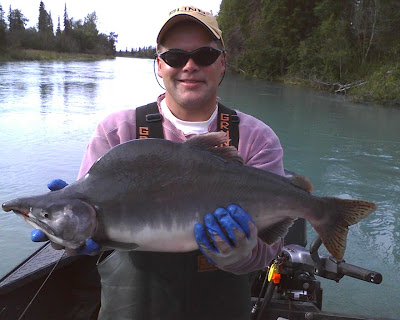 So, back to the topic at hand. Here I am "wasting" time in the evening fishing for pink salmon in slough I rarely fish. Thanks Will for sending me this photo of Humposaurus Rex!

Posted by Beaver Creek Cabins & Guide Service at 7:00 AM 3 comments: 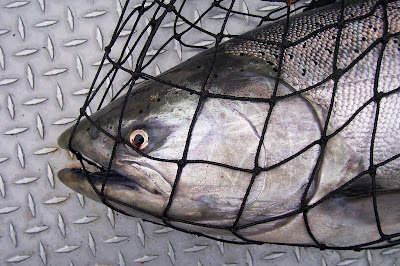 The 18th Annual Homer Winter King Tournament was held on Saturday, March 19th. 860 anglers on 248 boats caught 135 king salmon. Coming in first place with a 30lb king was Homer resident Mike Walls. His fish netted him a nice little check in the amount of $18,060.

This is a great little "cabin fever reliever" tournament that has been growing in popularity year after year. I've been part of this in the past and unfortunately I am one of those guys who said "it was just nice to be out." 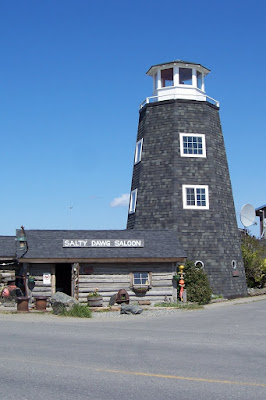 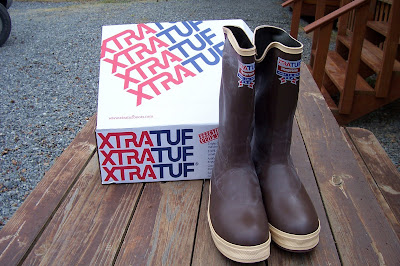 Outside of my fishing equipment probably the gear I cherish the most are my Xtratuf boots. You must be thinking that I'm really scraping for topics but these boots are unbelievable in Alaska. Don't believe me? Next time you watch any of the shows on the Discovery Channel or TLC about Alaska look at what the locals are wearing. The majority are wearing Xtratufs. They are an Alaskan standard.

Why Xtratufs? Because they handle the conditions found in Alaska. They keep your feet dry, they're snug, and they rarely slip on wet surfaces. Would I wear them in the winter? Usually not, but they handle the other three seasons wonderfully. They come insulated, uninsulated, and in steel toed (for the crabbers and other occupations where your feet may get crushed). There are three styles: above the calf, mid calf, and the low cut "Alaska Sneaker." Cost? Not bad. They come in around $80 and unlike cheap rubber boots you can get many, many years out of them.

When a person jumps in my boat and they're wearing these boots I know that I'm dealing with an Alaskan. Only once in all my years has someone fished with me wearing Xtratufs and they weren't an Alaskan. Mike Hoops, who is master brewmeister in Minnesota, wears these boots for work. I believe Mike worked in Alaska years ago so he's kind of an Alaskan, and that's where he was introduced to Xtratufs.

Before I go I'll tell you about an Xtratuf moment that Jane and I had a couple of years ago. One of my guide friends was married in the middle of the summer. The ceremony was held at a lodge just down the road from us. It was a nice intimate setting on a perfect day. Part way through the vows I leaned over to Jane and whispered to her, "is the minister wearing Xtratufs?" Sure enough he was. 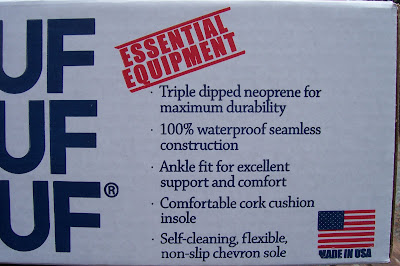 2011 Board of Fisheries Adjourns 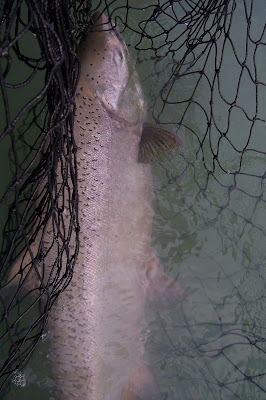 On Saturday, after 14 days of meetings and public testimonies, the 2011 Board of Fisheries adjourned. This seven member panel meets every three years to review and possibly change the allocation of the finfish found in the Upper Cook Inlet. The competing interest include sportfishing, commercial fishing, personal use fishing, and subsistence fishing.

I'm glad to inform you that after 211 proposals sportfishing and personal use fishing will remain relatively unscathed for the next three years. On the other hand, commercial fisherman will see a reduction in their times alloted for fishing. Alaska's fishery is managed for "maximum sustained yield" and the times have been a changin' for the commercial fisherman in the Upper Cook Inlet. There's no doubt there has been an emphasis placed on sportfishing/tourism and rightfully so. Within the state of Alaska over 70% of sportfishing effort occurs in the Upper Cook Inlet. This is because of the quality of the fishery and accessibility via a road system. On the flip side, of the entire commercial fishing harvest in the state only 3% comes from the Upper Cook Inlet. It only makes sense who should have priority in the fishery and if you're reading this blog I know which side you favor.

Tight lines until 2014!
Posted by Beaver Creek Cabins & Guide Service at 7:06 AM No comments:

What Not To Do With Your Boat On The Kenai 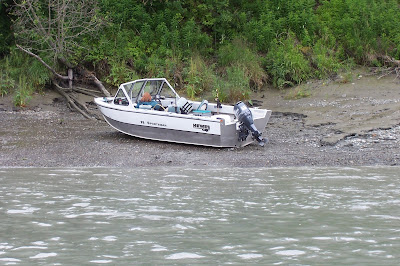 Water safety is very important to me, especially when I'm on the Kenai. I thought I'd share a few photos from this past summer of things not to do while boating on the river. If you look real close in the photo above there are two people in the boat. At the time I took the photo I thought that they were husband and wife but they could be boyfriend/girlfriend. Anyway, this is classic case of not knowing what the tide schedule is doing and this is common occurence on the lower Kenai. The people in this boat pulled up on the bank to fish red salmon. Apparently they didn't realize that the tide was still in when they started because when they finished the tide was out and their boat was high and dry. For at least six hours the two had to sit there waiting for the tide to turn. Hmmmm, I could only imagine what their conversations were like. 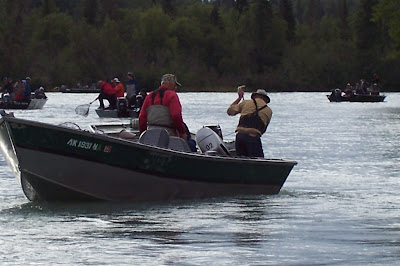 This picture was taken in August during the pink/silver run. What's going on in this photo is the anchor rope wrapped around the lower unit of the outboard motor (rendering it useless). Notice how all the other boats are facing the opposite way of this boat? I watched very closely and was ready to assist in case the boat took on water. That's what usually happens when your transom takes the brunt of the current. Fortunately these guys were anchored just off the main river on a slower seam and nothing but their anchor rope and ego were hurt. 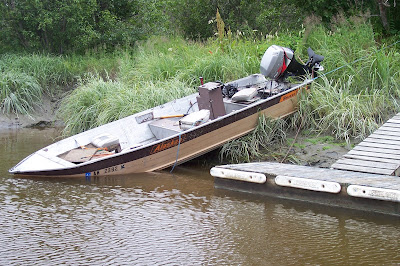 This is my neighbor's boat and dock. Every year this happens and you would think he'd figure it out by now.....Hello? On a large tide, a dock that doesn't float is not where you want to tie your boat. 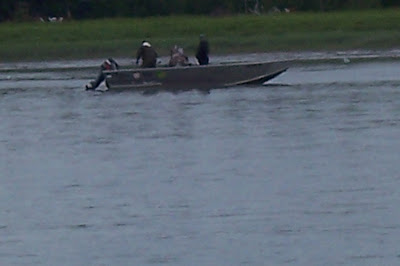 This photo was taken mid June and it's a bit fuzzy but it's a classic case of a guide who is either new to the river or only fishes it during the second run in July. Anybody who runs the river in May, June, August or September knows where the gravel bars are. Anyway, what happened is the boat was traveling full speed and bottomed out on a gravel bar just above Beaver Creek. It was a miracle that no one was thrown into the water and that the lower unit of the outboard still worked. Oh well, it all ended well. The boat eventually got off the gravel bar when the guide jumped into the water to push it into a deeper channel. I'm sure the the cold Kenai wade/swim will be a constant reminder to this guy about where not to run the boat next year.
That's it for my observations from 2010 about what not to do. I'm sure 2011 will prove to be just as exciting and fortunately, or unfortunately if you're the one getting hung up, my camera will be in the boat to capture the moment....
Posted by Beaver Creek Cabins & Guide Service at 12:24 PM 1 comment: