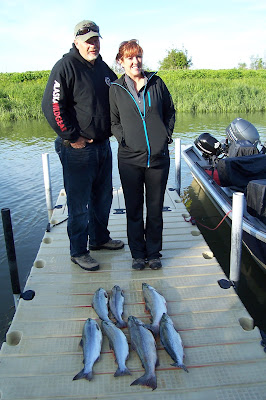 No king fishing last week so my only report will be about red salmon.  Above are Eric and Holly Taylor with their limit of red salmon from Wolverine Creek.  Last year I posted a story about "The Ring" and the proposal that occurred in my boat.   That was these two.  They came back as a married couple this year. Jane and I were happy to see them and have the opportunity to get caught up. Oh,I'd be remiss if I didn't mention Holly's sister, Charlene, who came again as well.  Although we couldn't fish the Kenai this year these guys made do and caught a lot of red salmon and halibut.    See you in 2013! 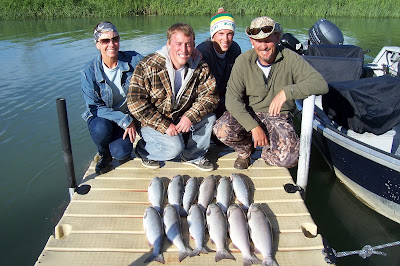 Here's the Lierd family posing proudly with the red salmon limit they caught.  We did manage to fish the Kenai on the last day of catch and release for king salmon but unfortunately the kings' were not interested.   In addition to red salmon fishing the Lierd's fished for halibut and did very well.     I had a lot of fun meeting these guys and I bet they'll be back to Alaska real soon. 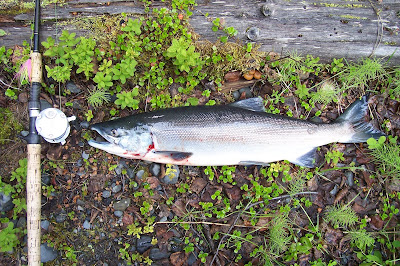 The final photo is a red salmon that I hooked (kept and ate) on the Russian River June 18th.  I've set aside this day to take my father fishing with me.   Although he is no longer here on this earth I always  take this day to honor him and thank him for finding the time to take me fishing.  Thanks for everything, dad (and you too mom for reading this).

Posted by Beaver Creek Cabins & Guide Service at 11:04 AM 6 comments:

On Wednesday the Alaska Department of Fish and Game announced that the Kenai River will be closed to king salmon fishing beginning Friday, June 22nd and will reopen July 1st. This Emergency Order was put into effect to protect the fish that have already entered the river and the remainder of the first run kings.

Unfortunately much of the public opinion blames the guides/sportfisherman for the decline. It is true that guides/sportfisherman have an impact. However, if only the Kenai River was suffering from low returns the finger could be pointed at all in river users.   But statewide rivers such as the Yukon, Kuskokwim, Karluk, Kasilof, Deshka, Little Su, and Anchor are all being restricted for king salmon fishing. Common sense dictates that this is an ocean problem and not an in river issue. Hard to say if it's from warming ocean temperatures, acidification, or commercial fishing; in particular the nearly 159,000 by catch kill of immature king salmon in the trawl fishery. One way or another the fishery biologists need to get a handle on this and take corrective actions. 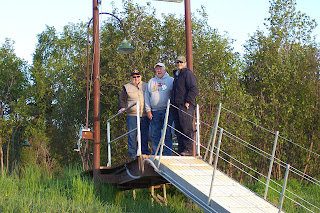 This week is normally the peak of the first run of Kenai kings.  Unfortunately no one has told that to the fish.  Either they are slow to appear or they aren't many fish in this years run.  Because of this the Alaska Department of Fish and Game on Friday issued an emergency order restricting the Kenai river to a "catch and release" fishery until July 1st.   Jane and I spent the day contacting our June customers to inform them of this change and fortunately very few cancelled their trip.  A few rescheduled for July but the majority are still coming and want the Alaska experience and the fact that they could not keep a Kenai king was secondary.   With groups that had multiple days of king fishing I strongly encouraged them to add a fly-in trip, a trout trip, a saltwater trip, or fish the Russian River for red salmon.   They all thought Plan B was excellent and adjusted accordingly.

I feel pretty lucky with all that Alaska has to offer.  Devoted readers of my blog will remember the Kearney, Nebraska analogy I used a couple of years ago when the Kenai was closed to king fishing in June.  You see, Kearney is known as the world capital for viewing Sand Hill cranes.  Imagine planning your trip of a lifetime around the migration of this bird and when you arrive they aren't there.  What else can you do in Kearney if the cranes aren't there?   My apologies to Nebraskan's, but not much.  Alaska, on the other hand, can offer you fly-in red salmon fishing/bear viewing, trout fishing, red fishing at the Russian River, clam digging, and saltwater adventures as alternatives if the king salmon do not show up.  Did I forget to mention that we have world class wildlife viewing, hiking on the beaches and the mountains, and glacier cruises in the Kenai fjords?  I'd say that's a pretty good Plan B. 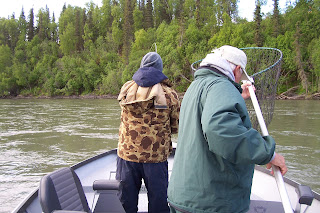 So, that being said, the fishing hasn't been too bad since the river went to catch and release on Friday.  The first picture is Bob, Ron, and Keith walking down the dock excited about what lies ahead. 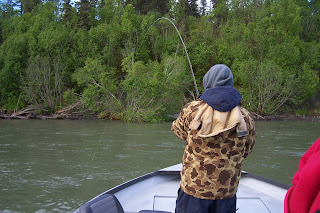 Only a couple of trolls into the day Keith hooked up with a nice 30lb plus king salmon. 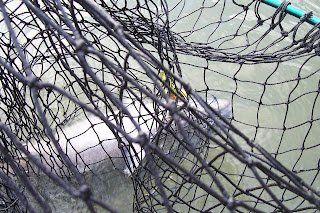 Bob took this photo as I was getting ready to release the fish.  Not the best picture in the world but clearly this fish was unharmed and ready to continue it's journey to the spawning grounds.

I'm getting my gear together today for a run to the Russian river on my day off.  The reports have been very good. George and Jerry, wish you were along for the ride. 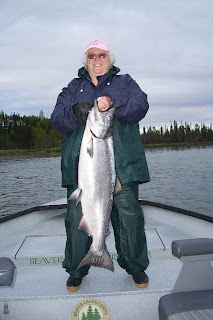 Well, I got half of my prediction right from last week.  The fishing was consistent, but it was consistently slowwww.......We caught a few, released a few but mostly enjoyed each other's company.   Here's Sue who told me she was ready for a 10 hour day but decided it was alright to be done after the first troll of the day.   Nice fish and a nice lady. 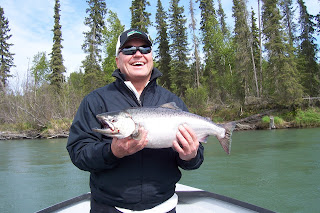 On the flip side was Jack.  We fished the river all day long and ten minutes before quitting time he hooked this fish.   Think he's happy?  He won the bet for first and biggest fish of the day. 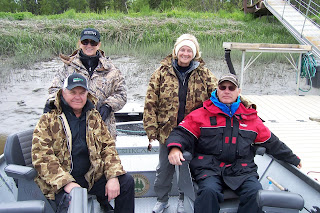 Thought I'd include this photo of Team Minnesota.  On the left is Jack and Gretchen Norqual and on the right is Tom and Patti Younghans.  It was a pleasure to meet the Norqual's and for the Younghans' it was a time to reminisce about old times.   Tom was one of my teachers in high school and he was also my hockey coach.  I wish the "catching" was better while they were here but nobody had a better attitude on the river than these guys.

Hard to say what the week ahead will hold.  I'm crossing my fingers that the king salmon are just a little slow in showing and it's not a decline of the early run.  I should also have a report next week about the red salmon fishing on the Russian River.  The opener is today an all indications so far is the run is behind schedule.

Until then, fish on!
Posted by Beaver Creek Cabins & Guide Service at 10:52 AM 1 comment: 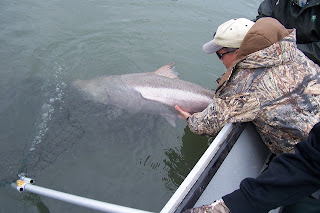 The king salmon are definitely starting to show up.  The numbers are improving and the overall success rate is improving as well.  The photo above is a release of a 50" king salmon.  There's no question the weight of this fish was over 60lbs.   This fish was caught during the annual Team Laflamme outing.  Todd, Alec, Bob "Dean-O", Janet and Alec's friend Michael were on board.  As we were letting our lines out on our first troll Todd was explaining to Michael that it takes 55 hours or 6 days of fishing on average to boat a king on the Kenai (Todd's numbers, not mine).  Four minutes later Michael has a bite and fifteen minutes later the fish is in the net.  It was a nice battle, over 300 feet of line peeled out on the initial strike, and Michael expertly guided the fish to the net.  Always fun with Team Laflamme and Dean-O's play by play commentary of the fight was priceless.  Can't wait to do it again next year with these guys. 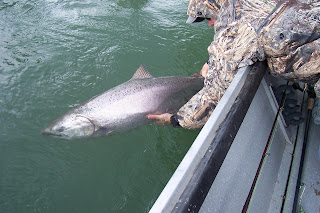 The fish above was caught and released by Becky Jahrig.  I didn't measure the fish but would estimate the inches between 42" and 44".  Her husband, Will, has seen a lot of fish in his life and estimated the weight at 45lbs.  Below is a YouTube video that Will took.  What was great about this day is it was the first time Becky has fished with me and to be part of her first Kenai king caught in the month of June was truly an honor.  Oh, she's caught plenty in July but this was her first in June.    Long live the kings!

As long as the water color stays good I anticipate the week ahead to be consistent.  It's not easy fishing, but putting the hours in will definitely pay off in the long run.

See you next week.﻿