When Silvers Were King....Last Fishing Report of '09 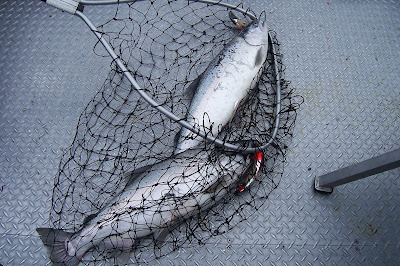 My last trip of the year was on 9/26 and today I decided to take the boat out for the year. I asked Jane if she wanted to fish one last time and she didn't hesitate to say yes but it had to be at noon and it it could only be for an hour.
Perfect, I thought, because the tide would be coming in at about that time. We fished for about a half an hour and the first salmon bit my line. As Jane was reeling in a second salmon hit her line. A double. I landed Jane's fish first but we had trouble getting the hooks and the fish out of the net. So, thinking fast I decided to net my fish while Jane's fish was still in the net. What you see on floor of the boat was the result. We could have fished for another half hour but it didn't take us long to realize how perfect it would be to end the season right then and there. Wow, what a great way to say good bye to the Kenai for another year.

So, photo number 2 is Renae and Kevin who came back to fish one last time. Photo number 3 is Bill and Jason. Photo number 4 is Jason. And finally, photo number 5 is Bill and Jason. My hats off to Bill and Jason for sticking out during a couple of days of bad weather. One morning the thermometer read 24 degrees. It wasn't until 11:00 a.m. that the frost finally melted off of the boat seats. Another day it was blowing and raining very hard and they stuck it out like troopers. I guess it's growing up in North Dakota/Minnesota that has hardened them to all weather conditions. It doesn't hurt that the fishing wasn't too bad either.

This won't be our last post but it is the last fishing report. I titled this entry "When Silvers Were King" because '09 turned out to be an excellent silver year while the king fishing not as good as previous years.

It's time to winterize the boat and the cabins. As time permits we will be sure to give all of you an update. 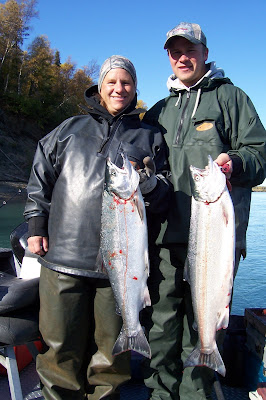 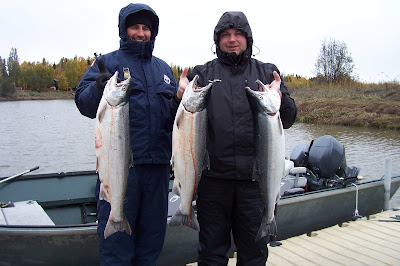 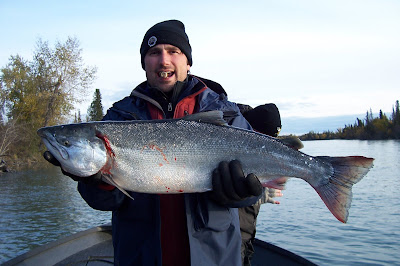 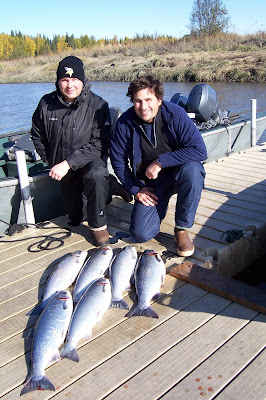 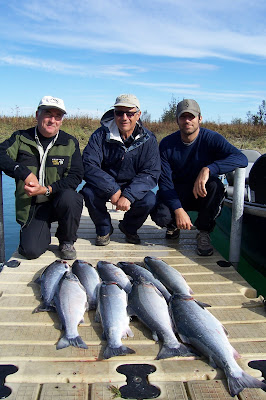 Overall the fishing was pretty good last week. The action was never red hot but we managed to limit out every trip but one. Of course, the trip that we did not limit out on was the trip that a seal took a fish off of our line. That's the fourth one this year and it's starting to make me wonder about the ratio of silvers to seals.

The top photo is Joe, Ron and Stef. Photo number two and three are of "Team Qdoba" from Anchorage. The final photo is of Kevin and Renae.

I've got my long underwear out in preparation of the week ahead. Termination dust is starting in the mountains and the morning temperatures are predicted to be in the 30's this week with the highs reaching the low 50's. 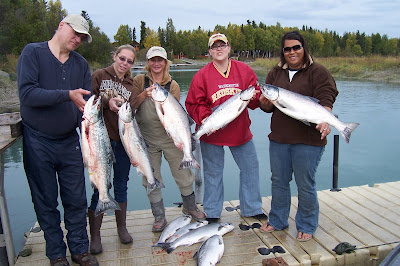 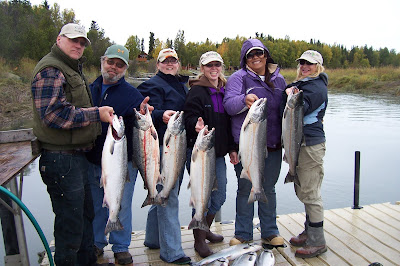 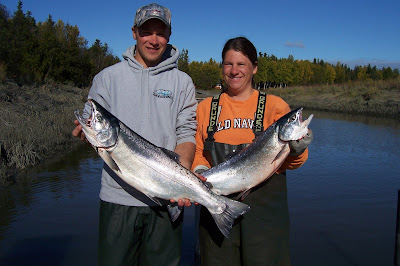 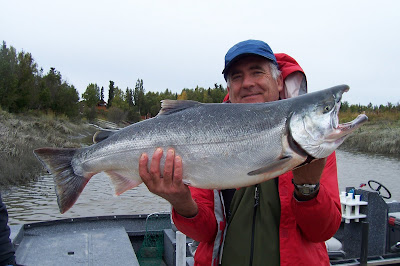 Last week saw 5 great days of catching salmon and one day of fishing. On 9/9/09 Team Raisanan had a day on the river in which we saw more moose than silver salmon: 2 moose, one silver. Oh well, "you should've been here yesterday or the day after" applies but Jeff, Brian, and Lars still made my day enjoyable. It's great to have outdoorsmen who realize that getting out is as important as catching a lot of fish. Thanks guys.

The first photo is Ron with his biggest silver of the day. The second photo is of Ron, Stephen, and Joe. Photo three is from day two of Team Oregon's assault on the river. Photo four is Trooper Dan and Tamika. Photo five is Joe and Ron. And finally, photo six is Team Oregon consisting of Kathy, Peg (not pictured), Karen, Susie, Mel, and Kathleen.

I'm fishing nearly everyday next week so once again I hope the run of salmon and decent weather continues. 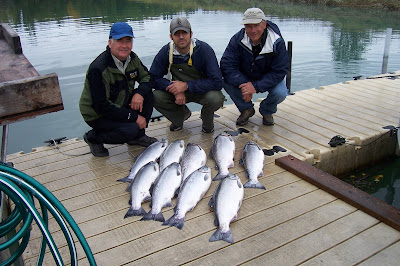 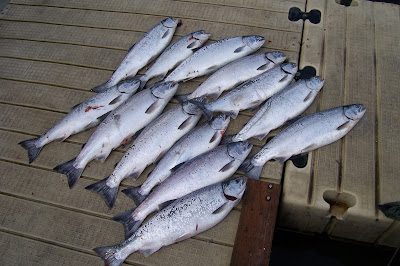 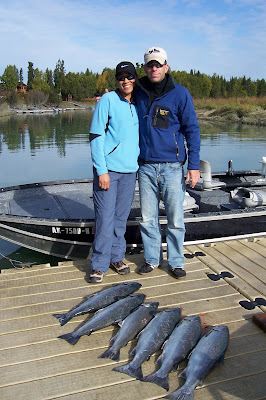 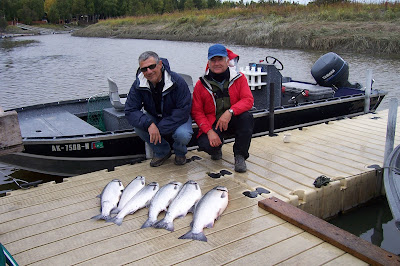 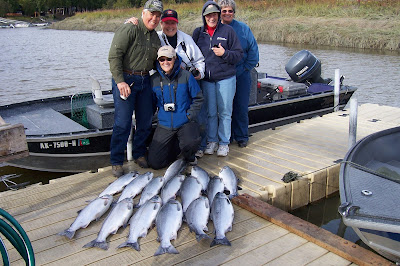 Posted by Beaver Creek Cabins & Guide Service at 10:40 AM No comments: 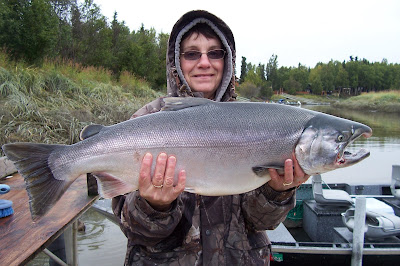 The fishing and weather continues to be very good. The only disappointments was my back giving out (too many fish netted?) and to saying goodbye till next year to quite a few friends.

Pictured above is April with her 15lb silver. The next picture is Joe and Bea with their daily take. The third photo is April and Duane. The fourth picture is April, Duane, Lars and Dan.

If any of these people look familiar from previous post it's because they were here earlier in the year. Dan and Joe both decided that one trip to Alaska was not enough. You'll see more photos of Joe because he is here for three weeks. I wouldn't be surprised if Dan suddenly showed up for a third time this year.

Here's hoping my back, the weather, and the fishing continue to hold up. 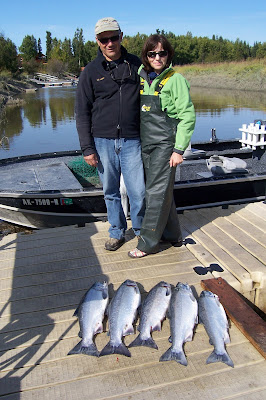 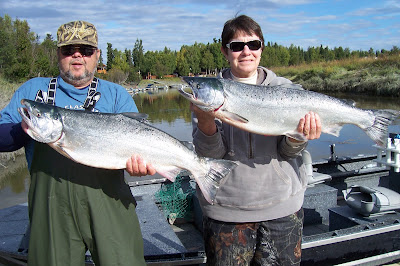 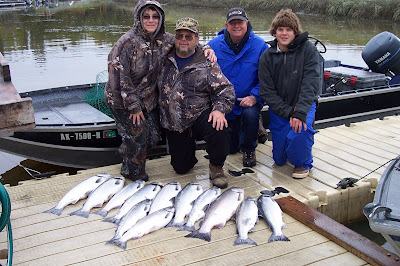