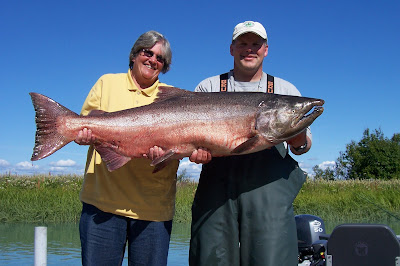 A couple of years ago Brett Johnson coined this phrase. In the middle of July during the peak of the king season the bite was on and Brett said, "I don't want any eggs on my hook, I want to fish naked." He was feeling it and in the middle of all the bait being fished in the river his bare spin 'n glo lands him a 56lb king. This past week we had no choice but to fish naked. You know what, through hard work, perserverance, and a lot of luck the bite was pretty good.

The photo above is my good friend Kathy Ingram. This fish measured 50"x30.5" and weighed in at 63lbs. This fish was the largest landed in my boat this summer and in her many years of king fishing it was the largest one for Kathy. It couldn't have happen to a nicer lady. By the way, thanks Peg for the nice assist. 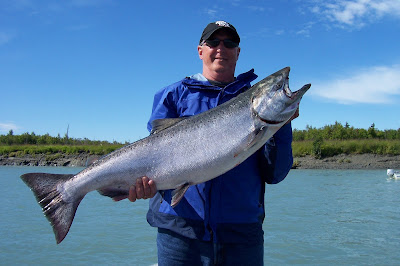 Here's the Ragin' Cajun Gary Smith with a nice 39lb hen. I'm not so sure Gary was a fan of the color pink but when this fish hit his spin 'n glo he became color blind. 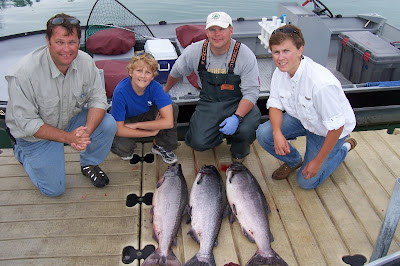 Here's Chris, Benjamin, and Davis with 3 nice fish all in the 30lb range. These fish came on the last afternoon trip of the king season and the only way it could have been better is if Paige would have gotten one too. 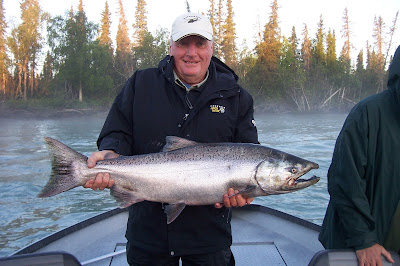 Dave Sporrer holds up a respectable king caught two minutes into the morning. If I had any disappointments this past week it's that the the Sporrer clan came up a little short this year king fishing. Oh, they more than made up for it with red salmon, but there's nothing like seeing Sarah, Amy, Ursula, David, Bill, Susan, or Carey wrestling with a large Kenai king. They all had bites and opportunities, and the did catch a few, but it just wasn't in the cards this year. A note to Susan.....I can only post a few photos at a time so I'll use yours next week. 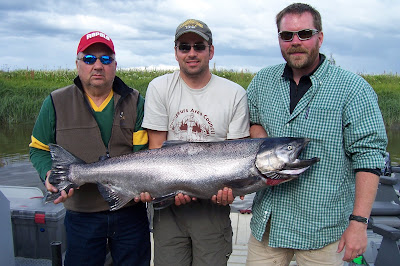 Here's Team Xtratuf showing off their 35lb hen. That's Bob on the left, Trent who caught the fish in the middle, and Mike Hoops on the right. These guys were on their way to Kodiak and worked in an afternoon trip on the Kenai.

The 2011 Kenai king season is officially over and starting next week I begin fishing for silver salmon. A few silvers were caught last week but my educated guess is the fishing will be good but the catching will be somewhat difficult.

A final thought on the king season. I'd like to thank all of you who chose to hire me a a guide this past year. The Kenai was difficult, very good at times, and not so good other times. One thing that was constant every day is I enjoyed spending time with the people that were in my boat. Seeing a beautiful Kenai king is great but you are the reason why I love doing what I do.
Posted by Beaver Creek Cabins & Guide Service at 12:15 PM 3 comments: 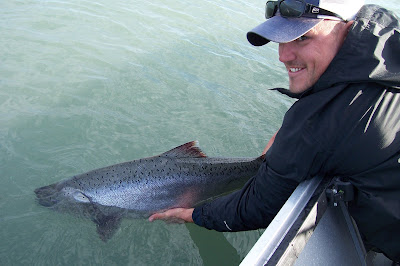 Fishing this past week was up and down. There would be a little flurry of activity and then nothing for hours on end. There's no doubt that the people who fished full day trips had more "catching" success than the half day trips.
The photo above is Jeff "Long Live the Kings" Provost releasing a nice hen. Jeff and his wife Christie caught and released king salmon on every single trip. It was a lot of fun fishing with them and I look forward to seeing them again next year. 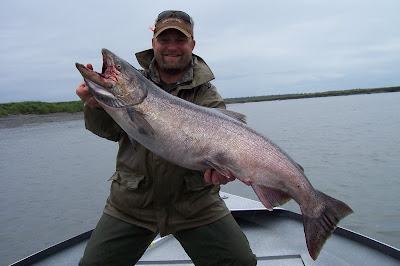 Andy Hochmayr is pictured above with a 42lb hen he caught in the Pasture. Glad Andy kept the hook in this fish because on his prior bite he set the hook so hard the sinker and the wing on the spin 'n glo came off his line. A lot of power and adrenaline in this guy but his smile says it all..."you didn't get away this time!" Andy was up with Trevor Millerbernd and after a two year absence and it was great to fish with them again. The only thing missing was Tony and hopefully he'll be back next go 'round. 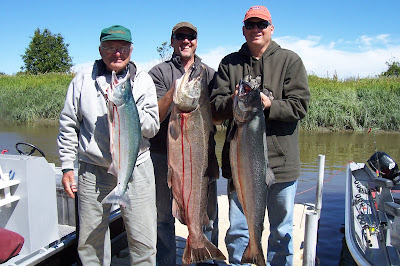 Here's Gene Miller, Mike Stacken, and Dick Miller posing with their half day catch. Father/son moment number one this past week. Gene released two smaller kings this day and tried to outdo the "kids" in the group. Unfortuntately, the only keeper Gene caught was a red salmon. We tried real hard to get Ben in the group photo but four bites with none landed kept him on the other side of the lens. 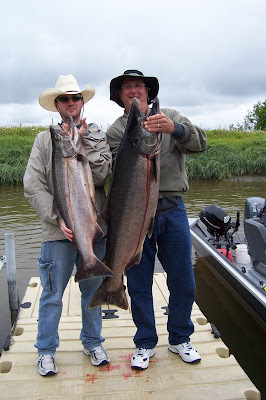 Father and son moment number two this past week. Here's Gary and Jason Smith after a morning trip. Nice action and lively conversation made the time go by fast. 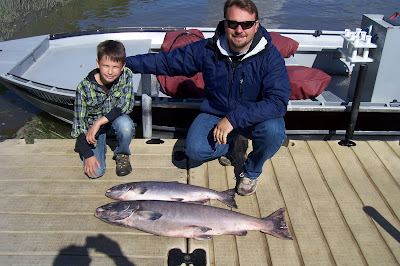 Finally, father and son moment number three. Here's Chris and Trevor proudly showing off their catch. I've had many father/son moments on the Kenai with my dad and with my son so it's always fun to be part of this experience.
So, the week ahead will be challenging. The red fishing should continue to be white hot, but the king fishing does not look promising. Due to lower than expected returns, the Alaska Dept. of Fish and Game has issued an Emergency Order (EO) restricting the use of bait for king fishing until the end of season (July 31st). I expect we'll continue to catch kings, as you can see on the blog we do fine in May and June without bait, but the action will be below the normal final week of the king season.
Always the optimist, I'm keeping my fingers crossed for good king numbers and for good weather for the week ahead.
Posted by Beaver Creek Cabins & Guide Service at 2:25 PM 1 comment: 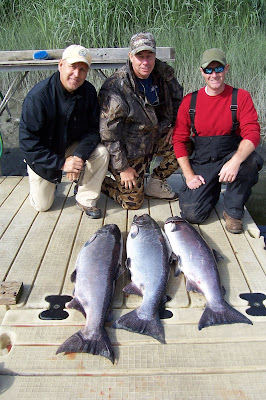 This past week has been the most consistent king bite on the Kenai. We've been working the tidal area from the Crossover to the Pasture on a daily basis. Most fish have been caught on a spin 'n glo with eggs with a few caught on kwikfish with a sardine wrap. Pictured above is Arne, Jim and Mike with their Super Tuesday limit of kings. 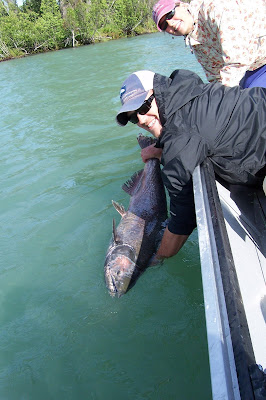 Here's Jeff and Christy releasing a nice Kenai king. This is one of three they caught and released on Saturday afternoon. They told me they would get all the red salmon they need in the week ahead and just wanted to catch and release. Good for them and long live the the kings! 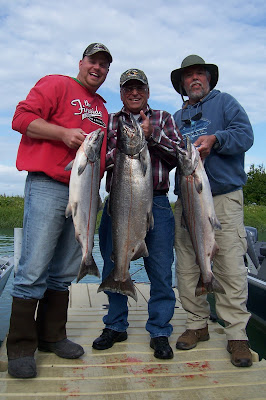 Here's Joe, Butch, and Jigs of "Team St. Paul" posing after a successful afternoon of fishing 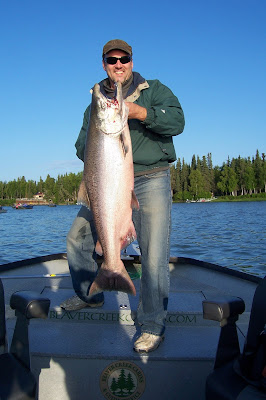 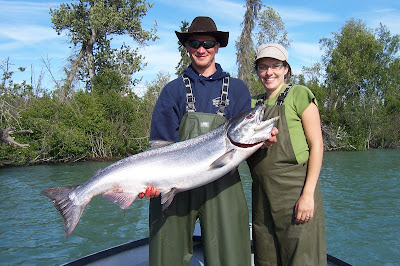 Wally and Lisa (visibly happy and pregnant) show off a "quitting time" fish. The two hadn't had a bite all afternoon and with less than 5 minutes left in the day this beauty hit.
I anticiapate the week ahead to be strong. We are definitely hitting the peak of the second run of kings.
One last comment, the red salmon have hit the river in huge numbers. Let the madness begin.
Posted by Beaver Creek Cabins & Guide Service at 10:45 AM 1 comment: 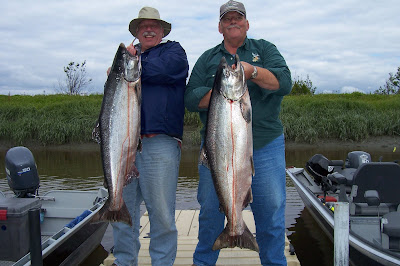 The fishing this past week was steady. The best bite was either in the morning or with the incoming and outgoing tide. Most of the fish caught in my boat have come at the Crossover or Mud Island. Pictured above is Bill and Terry with a couple of nice fish caught on a spin 'n glo with egg and a sardine wrapped kwikfish. I didn't post Terry's second fish but he is officially tagged out for the season. Not bad, two trips, two Kenai kings. 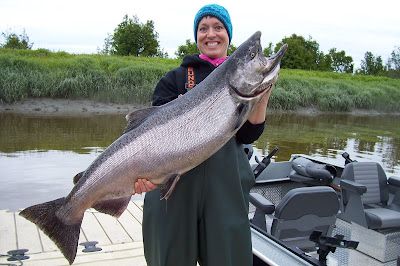 Here's lovely Jane (my bride) with a nice king caught on Sunday. This fish fell victim to a chrome and chartreuse kwikfish. Jane managed to catch this fish on her second troll and it took plenty of muscle to get it to the net. 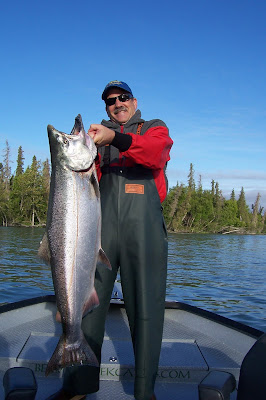 Here's Phil with his king. The last time I fished with Phil was a couple of years ago. He was proud to tell me that he's batting a thousand when fishing kings with me. 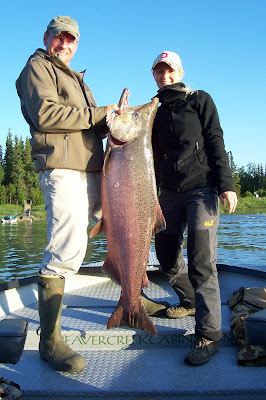 Here's picture of Nikki Crawford with the largest fish she has ever caught. Glad I could be a part of it. 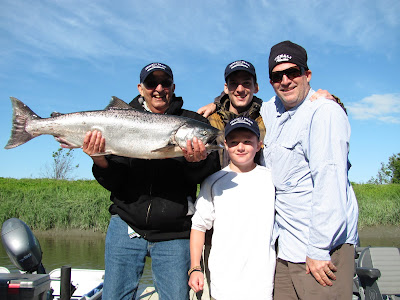 Like Nikki, here's Everardo with the largest fish he has ever caught. Team Apple Valley one upped Team Woodbury but I have a sneaky suspicion that they'll all be back to try it again. I had a great afternoon fishing with these guys.
For the week ahead I expect the king bite to improve. And, for you red fisherman, a few reds are starting to show so it will be a matter of time before all mayhem breaks loose.
Tight lines!
Posted by Beaver Creek Cabins & Guide Service at 1:35 PM 4 comments: 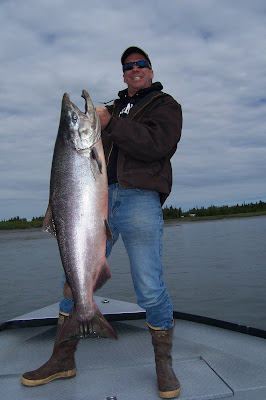 The first part of last week the Kenai was closed to the use of bait. Inconsistent best described the fishing. One day there would be a decent bite and the next day was not so good. That all changed when the "no bait" restriction was removed on July 1st. There's no doubt the first day of bait was the best day of fishing to date. Many boats caught multiple king salmon. July 2nd was a good day as well but not quite as hot as the day before.
Pictured above is Tony Brown with a nice 48lb king salmon. 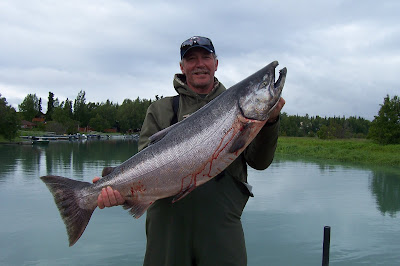 Here's a photo of Greg Maas with a 40lber. It only took him 4 misses before this one finally stayed on the hook. 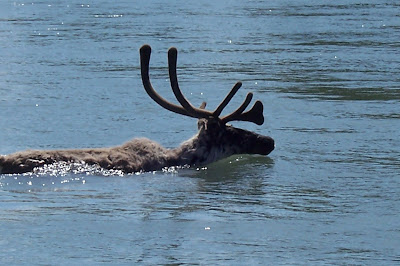 In between the fishing action the wildlife viewing was great this past week. It's not often that I see a bull caribou on the river but it was as if this one wanted to get it's picture taken. We were in the middle of a troll and this one jumped in the river and swam right in front of our boat. 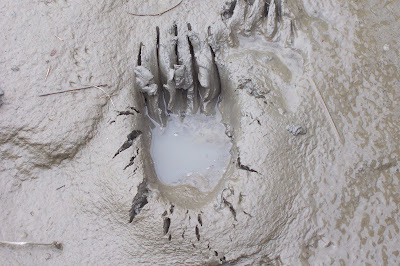 And, here's a bear track along the river bank next to our dock. That is as much as I want to see of a bear at 5:00 am.
Even though we are in between the first and second run of king salmon, for the week ahead I anticipate the bite to be consistent with a mix of small and large fish.
Posted by Beaver Creek Cabins & Guide Service at 2:49 PM 1 comment: