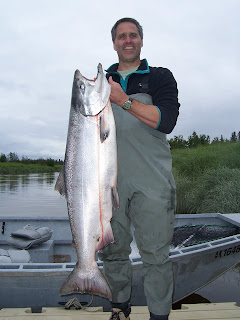 This post has been long overdue.   When I first came up with the idea of "Kenai Profiles" I had a handful of people that I knew immediately were blog worthy.  But for some reason, I've put off profiling my long time friend, Todd Laflamme.  I guess it's one of those things that's been too close to me and unfortunately I've probably taken it for granted.  Not anymore.   I don't know about you but the benchmark that I use in determining the depth of a friendship is whether or not I would call a person at 2:00am if my truck broke down.  Todd is one of those guys I could call in the morning, during dinner, at 1:00am, 2:00am, 3:00am, doesn't matter.  He'd answer the phone and say "what do you need?"  How great is that?

I first met Todd in 1982 when we both enrolled at the University of Alaska-Fairbanks.  Todd came from Connecticut and I came from Minnesota.   We lived in the same dorm and it didn't take too long to figure out we had a lot of similar interests.   I'll have to say some of my best adventures in college happened with Todd.   Hiking, fishing, and camping from Denali to Homer, whenever we had any extended time off  we would try find a way to get out and explore Alaska.   We still try to do this even today. 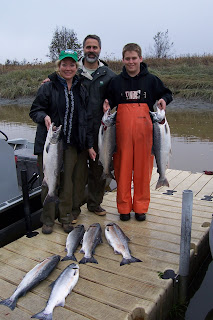 It wouldn't be a blog if I didn't share a few photos.  Here's the Laflamme family after a morning of silver fishing on the Kenai.  That's Kim, his wife, on the left, Todd in the middle, and Alec, his son, on the right. 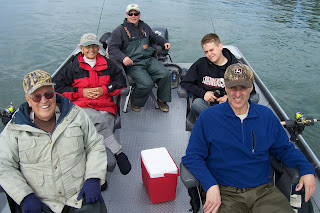 Since Jane and I have owned Beaver Creek Cabins, Todd has made it a point to bring his mom and dad down to the Peninsula to recreate.   Bob, aka Dean-O, is one of a kind and Janet is a treasure.    Definitely one of our highlights each summer. 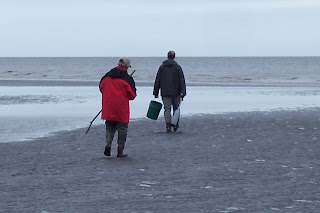 Here's Janet and Todd in the spring of 2012 walking the beaches near Ninilchik in pursuit of razor clams.

I do feel bad that I don't have any photos of Todd's in-laws, Jerry and Donna to post.  They too have been down to fish and dig clams but I fortunately did not have my digital camera with me when they were here.   I'll get 'em next time.

No other way to end this profile other than saying:  amigo, brother, bud, pal, compadre, cohort, comrade, dip net deck boss, walker of dogs, procurer of meat,  cleaner of clams, call Todd what you will, he's just a good guy and a good friend.

Posted by Beaver Creek Cabins & Guide Service at 7:15 AM 4 comments: 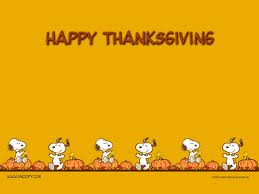 Hey everybody, have a great week. 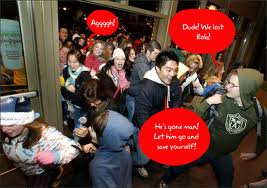 Posted by Beaver Creek Cabins & Guide Service at 6:37 AM 1 comment: 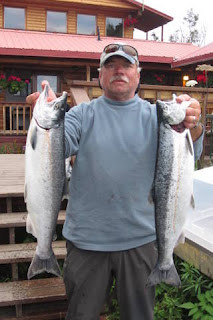 Here's a guy that has a real passion for life, Dave Anderson.  If you don't believe me, take a look at his blog, Fishin' with Dave.    His blog is my absolute favorite and I always enjoy reading his well written posts about his daily life.   Go ahead, click on the link,  I know if you like reading mine you'll be a fan of his as well.

Dave and I go back to 2000 when I met him on his first trip to the Kenai River.    At the time I was guiding for Jeff King and by luck I just happened to get Dave and his crew for the day.   It didn't take me long to figure out I liked this guy.   Maybe it's the Minnesota/Wisconsin connections (I grew up in Minnesota but my birthplace was Green Bay, Wisconsin) but I think it's more than that.    Dave is just one of those guys that you're instantly comfortable around.

Since our first meeting, Dave has made it back to Alaska every pink year except for 2010.   Even though our cabins are always full when he comes (it's during the Blinn group), Dave always finds time to call or to stop by to say hello.   Some times he brings freshly picked sweet corn from Minnesota, some times he's bringing me a new lure to try out.    It's all good.  If you haven't guessed, that's Dave in the photo above holding a pair of Kenai silvers caught this past August. 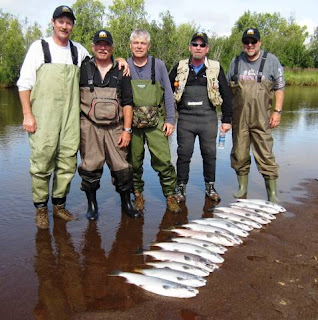 Here's Dave's 2012 crew.  From left to right is Greg, Dave, Steve, Mark and Tom.  This is limit of silvers taken on a fly in trip to the Bachatna River. 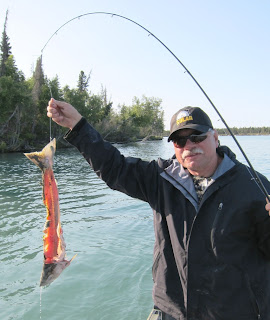 Ahhh, next time Dave try to catch a fish with the fillets still attached......

Our sport show season is just around the corner and this is another time of the year we get to see Dave.   Jane and I always look forward to visiting with him and can't wait to find out if his recent posts are all true.... just like mine! 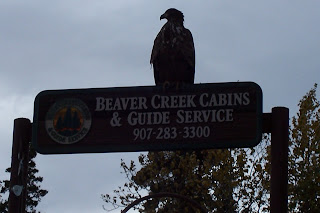 Do your civic duty.  Vote early and vote often! 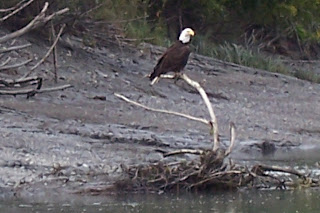 Posted by Beaver Creek Cabins & Guide Service at 8:12 AM 2 comments: