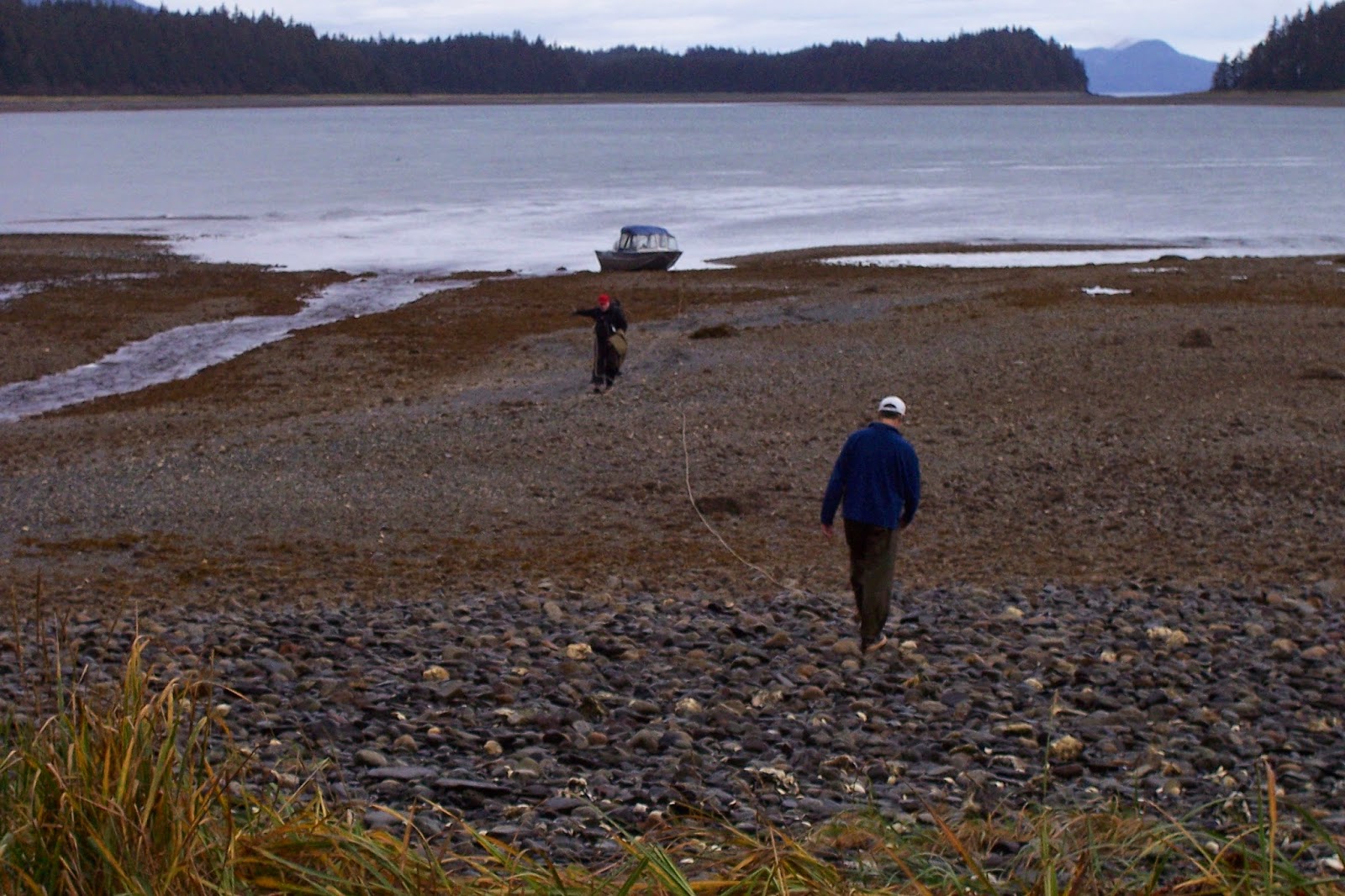 Sunday morning came and the boat was right were it should be.  How about the deer, were they where they should be too? 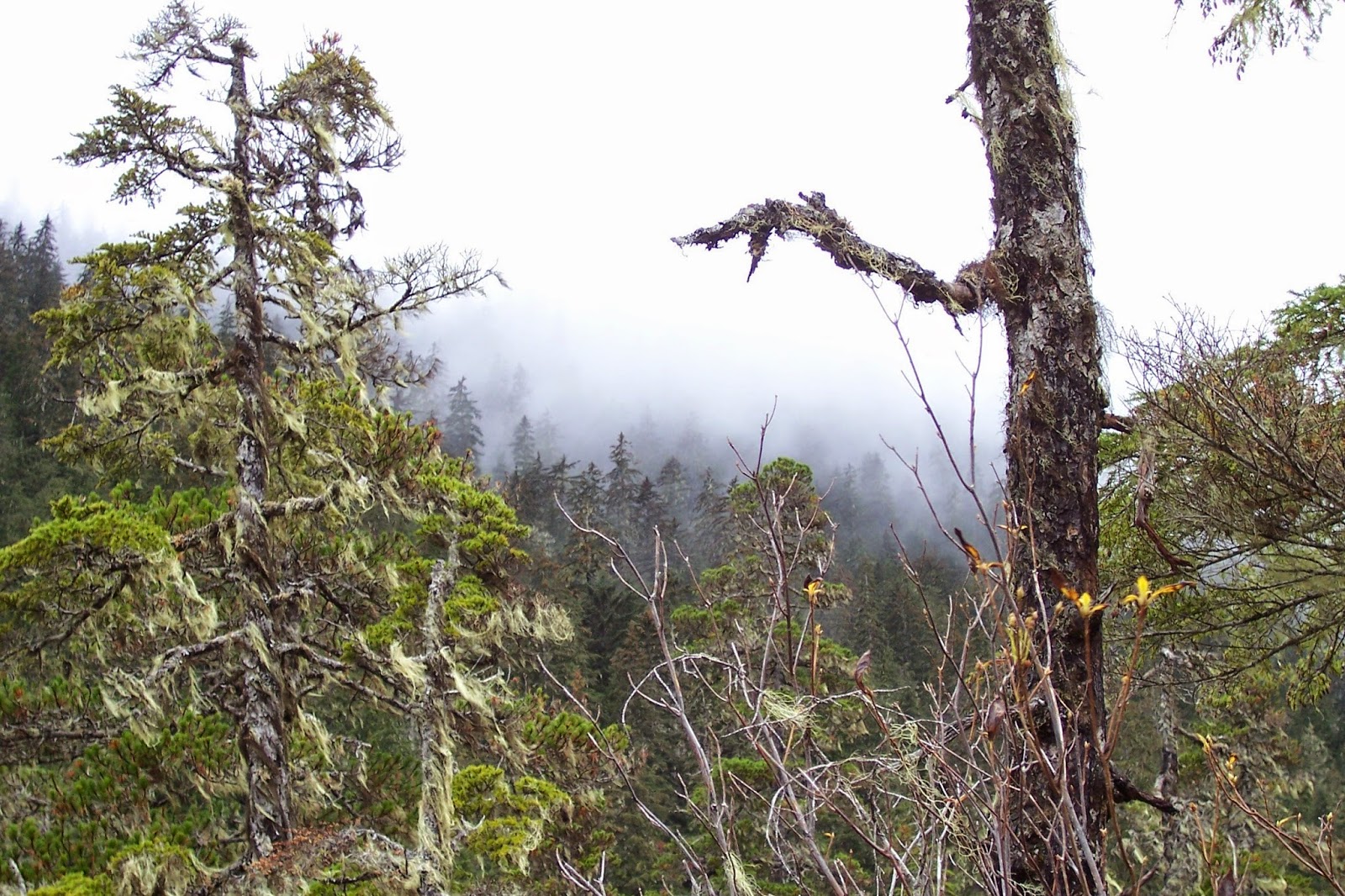 We made it over to Admiralty Island with no hitches.  Our plan was to hunt a series of muskegs just south of where we hunted on Friday. We had less wind, and rain, which meant our hunting conditions were much better. 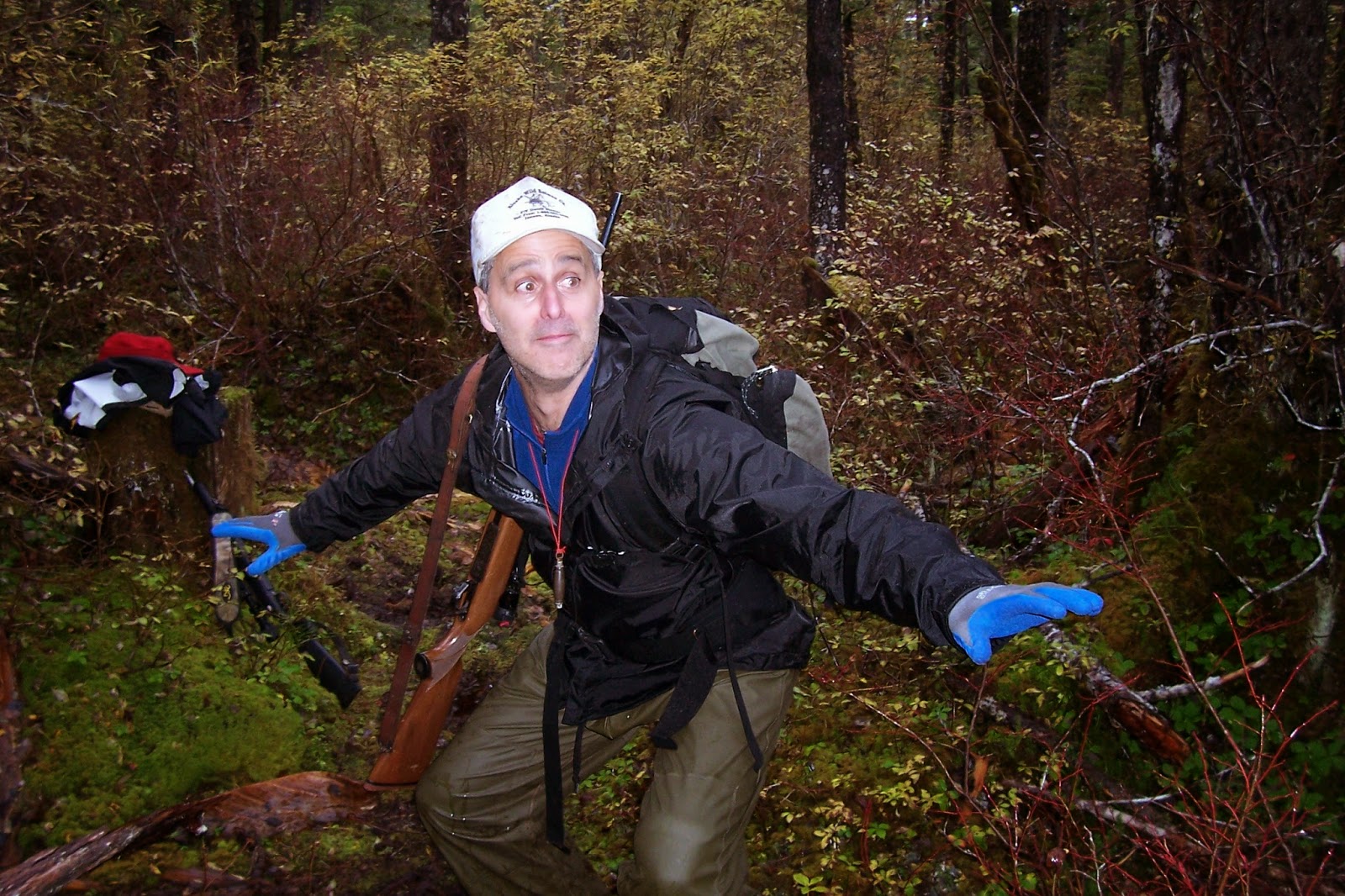 Me, on the other hand, pretended I knew what I was doing. I may dress like a hunter, but I'm that guy that had to borrow a rifle to go on a hunt (thanks, Todd). 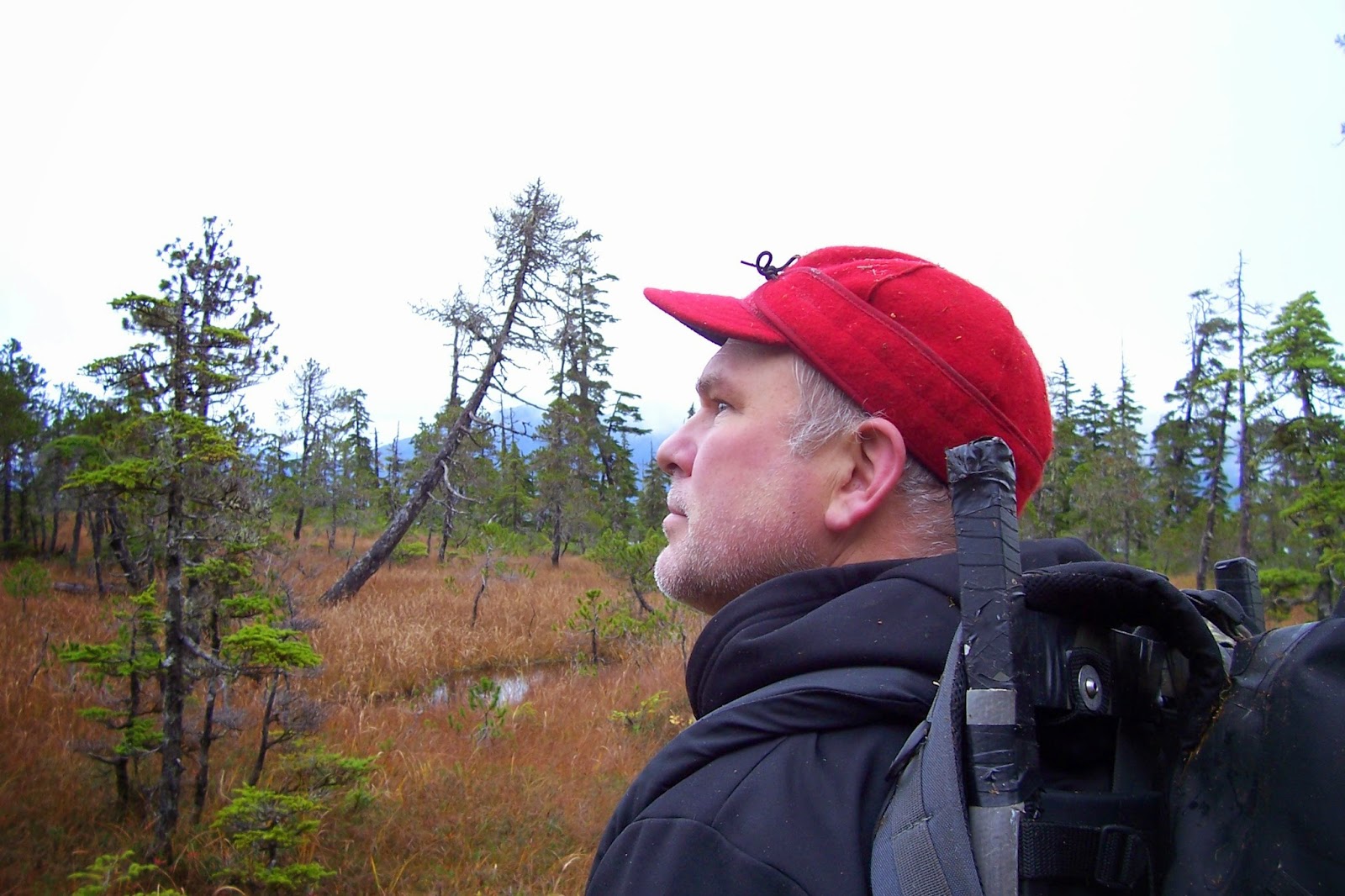 Since this was his backyard, Mark definitely knows what he's doing. Here he is surveying the muskeg after making a series of deer calls. You could tell Mark is good because he's wearing a Stormy Kromer hat (right, Dave?). 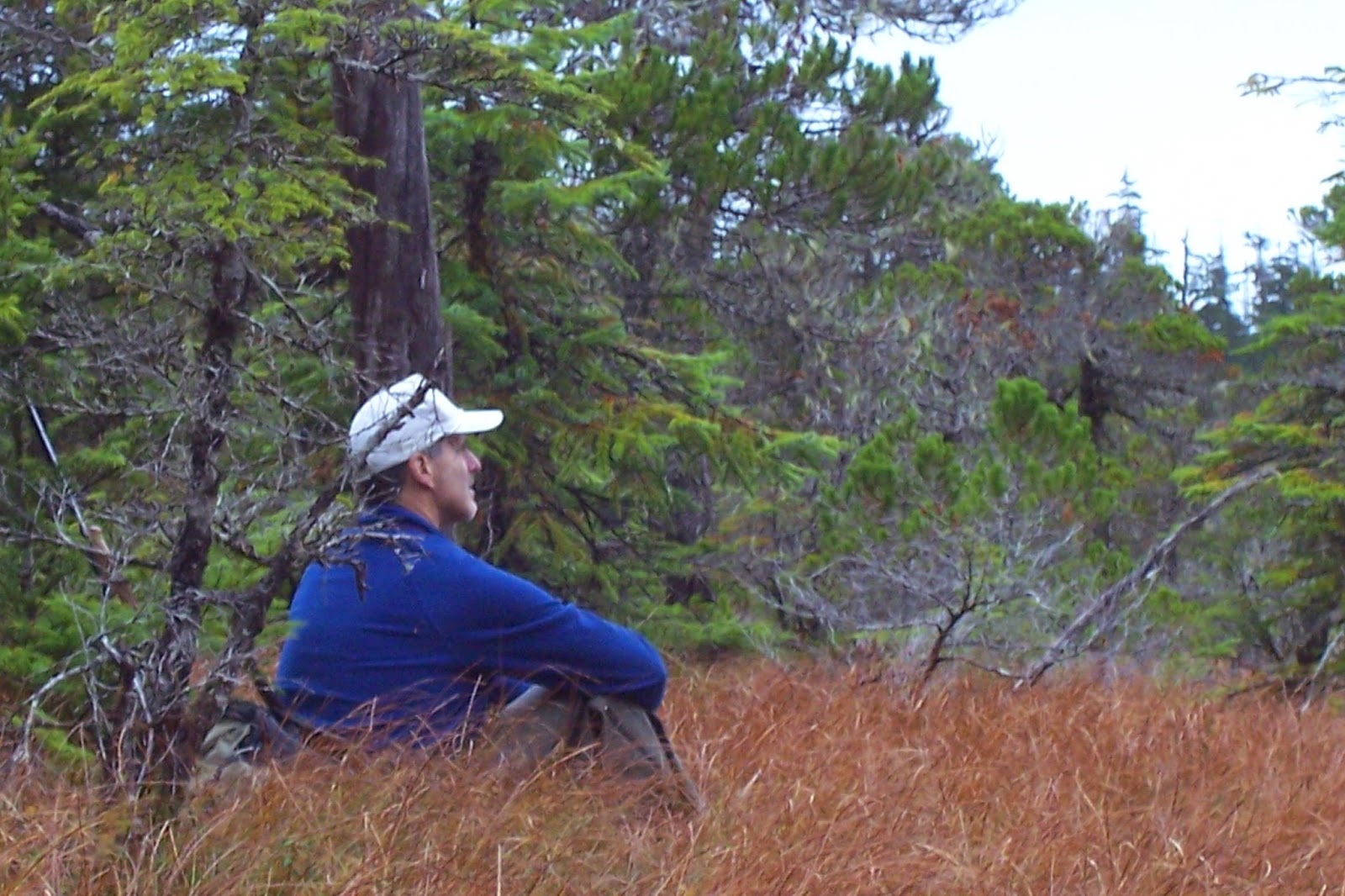 Todd didn't always hunt Buffalo Springfield style.  Here he is patiently waiting for a deer to come into view.

Unfortunately, on this day, no deer would show itself (sorry if I let down any of my readers).  Oh, it was encouraging that we saw more signs than we did on Friday, but the deer definitely won.  Ah, but next time...... 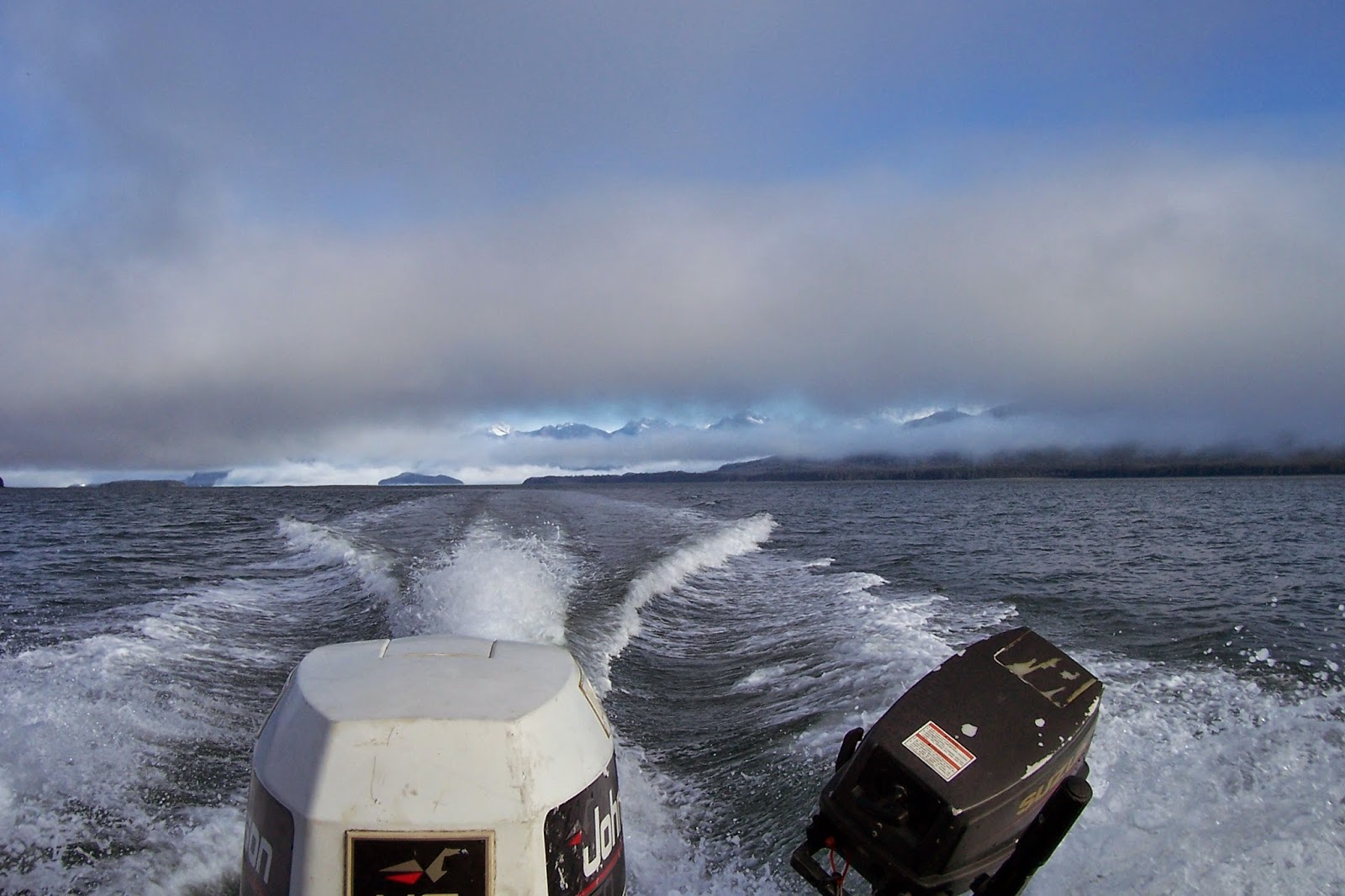 Since I've been back to Kenai I've had time to reflect on my adventure with Todd and Mark. I knew in advance that this time of year was not the best time to hunt deer.  However, this happened to be the only time that all three of us could get together to do this. I would say this trip is perhaps summed up best by paraphrasing a sign that Will Jahrig keeps in his shop. "The least important part of hunting is hunting."

Posted by Beaver Creek Cabins & Guide Service at 8:43 AM 1 comment: 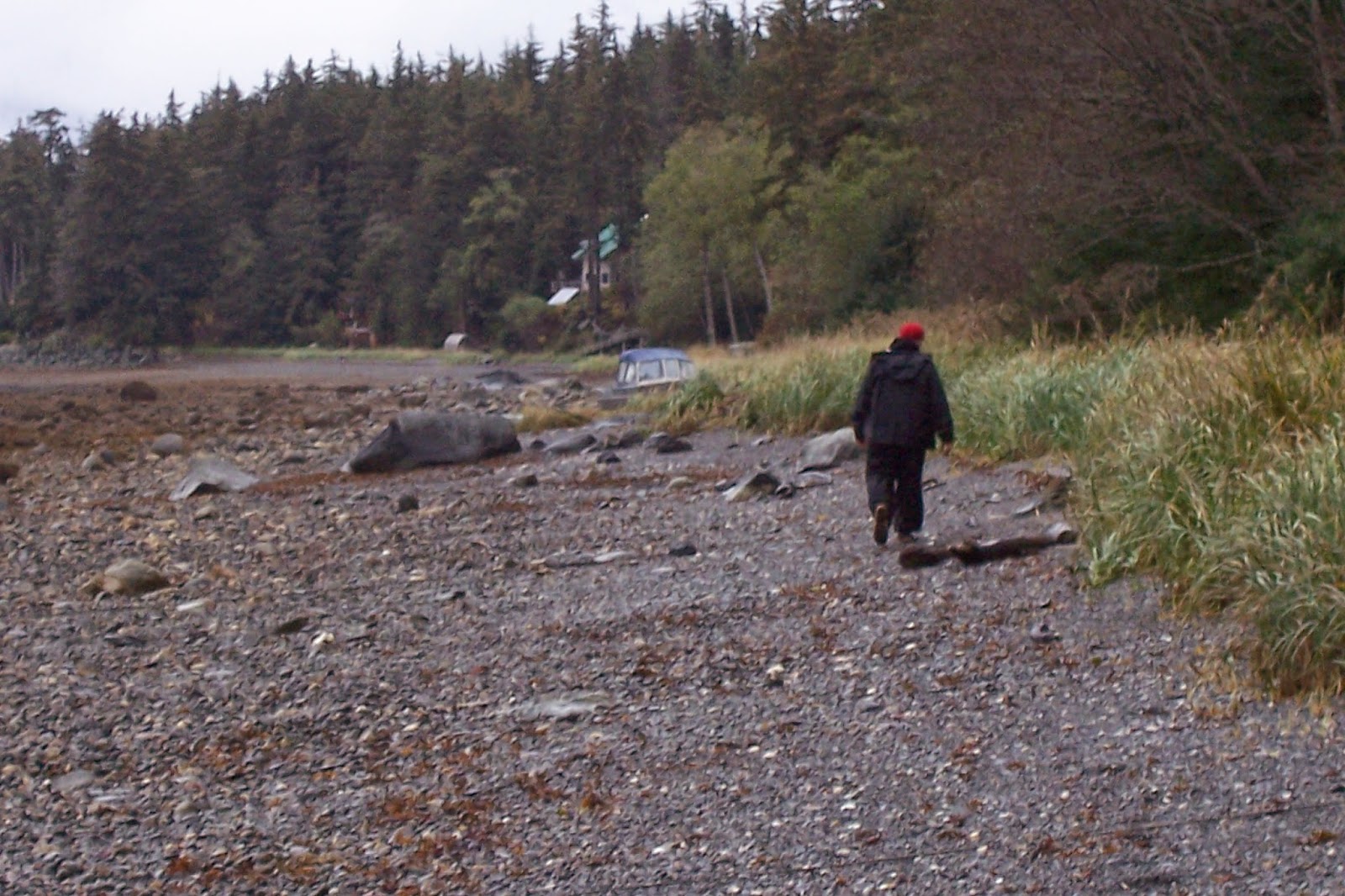 It ain't easy being me.  So says Mark Stopha.

On day 2 we were going to get an early start.  After breakfast we loaded up our packs and headed down the trail to the beach where the boat was tied up.   Mark and Todd lead the way.  As the trail transitioned from coastal rain forest to beach grass, the ocean came into view.  Mark and Todd slowly came to a stop.  By the time I caught up to them I could hear, ".....where did it go?"  Oh, oh, no boat.   After looking out across the ocean in search of a drifting boat it was Mark who took a look up the shoreline and found it. Turns out we had a mechanical breakdown with how the boat was tied up.  We were very, very lucky that the wind blew into the island and not away from it.  Did I mention we were lucky? 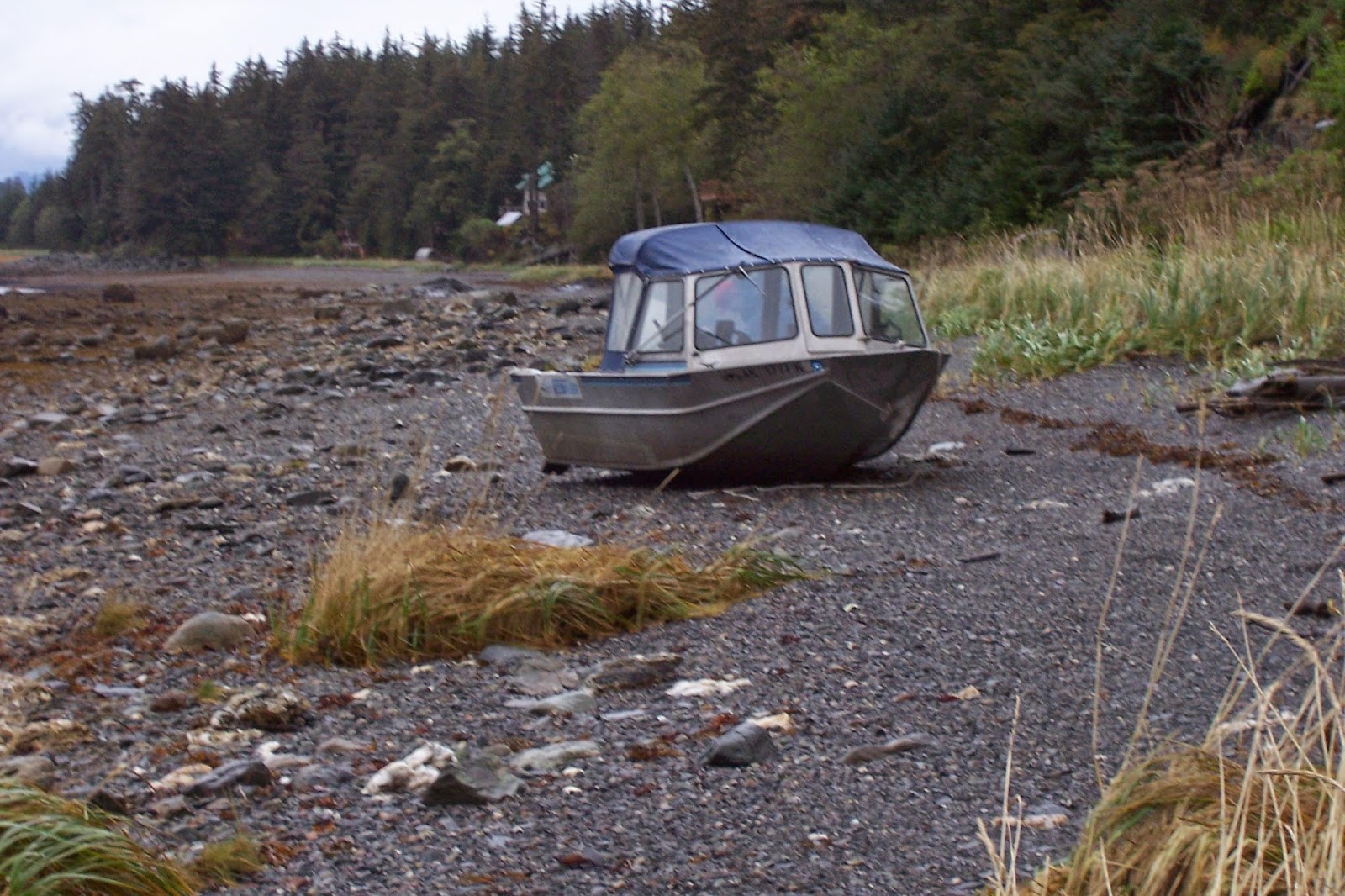 Whew, what a relief.   I knew we weren't far from civilization but not having a boat kinda worried me.  I wondered how long would it take for someone to realize that we were stuck on an island.  I mean, for three seasons the castaways were on Gilligan's Island and they were never found.  It wasn't until they made a movie that Gilligan, Skipper, the Professor, the Howell's, Ginger, and Mary Ann finally made it off. Anyway, I digress.... 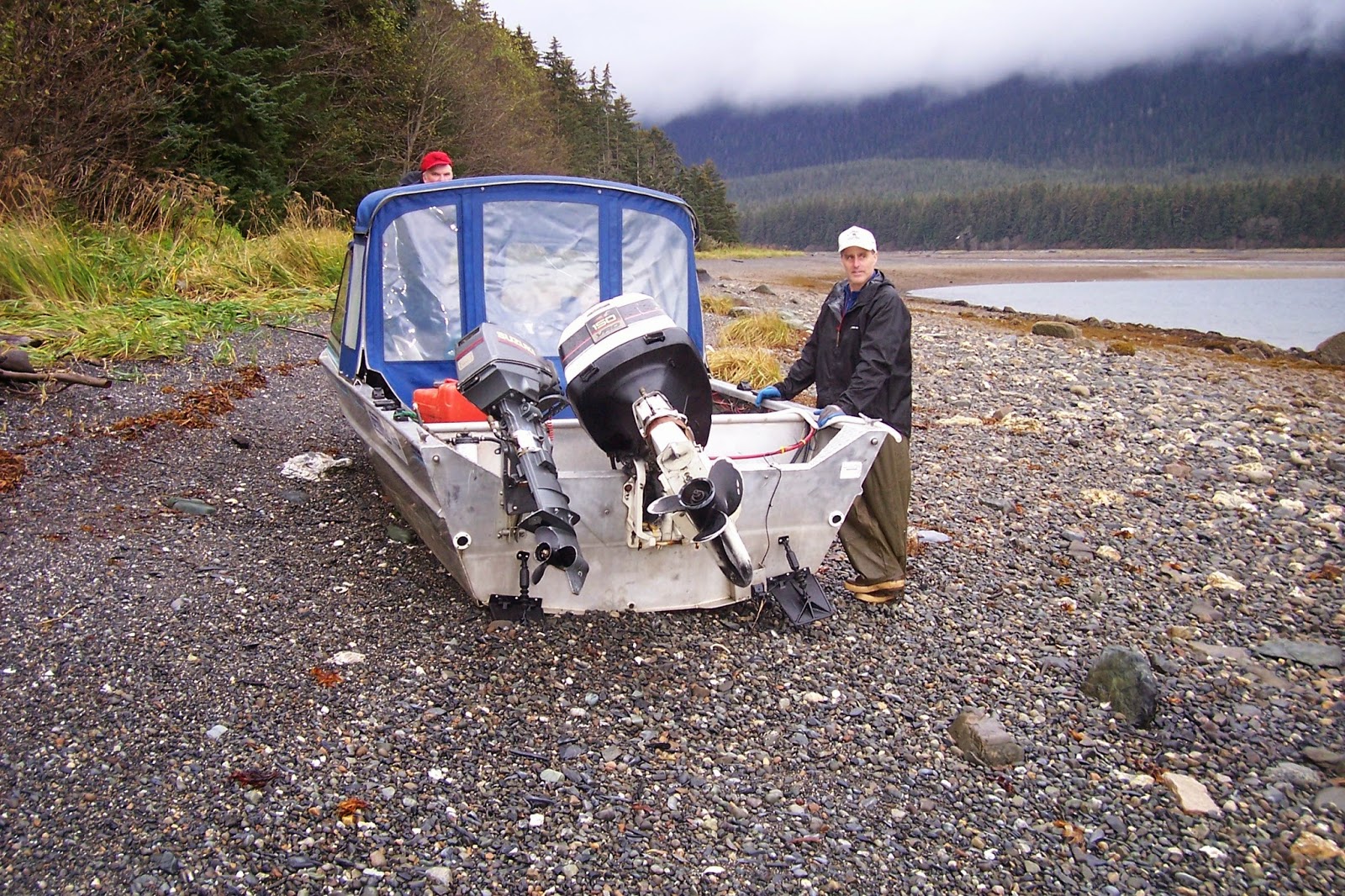 Mark said the next high tide would be at 3:30 p.m.  He said if we still wanted to go hunting today we could take his kicker motor off the boat, put it on a small skiff he kept on the beach, and head across to Admiralty Island. Todd said, "we're going back to the cabin and we'll wait until the tide comes up. No hunting today"   Good move because the tides were getting smaller every day and we weren't sure it would be high enough to float the boat.  If we were a just little bit late coming back from Admiralty Island we may never get the boat in the water.  Luckily, the tide was high enough.  And you know, this time we made sure to use a different setup to secure the boat.

Was I disappointed in not hunting on Saturday?  Heck no!  It rained all day (year to date rain total for Juneau is over 56").  The cabin was warm, dry, and we were able to listen to Mississippi State beat Auburn on SiriusXM radio.  Considering Mark got his masters at Mississippi State, I think he too was happy that we didn't go hunting. Go 'Dogs!

I went to bed Saturday night knowing that Sunday would be our final day of hunting.  Would we get anything?  Even more important, would the boat be there in the morning? You'll have to read the next post to find out...

Posted by Beaver Creek Cabins & Guide Service at 7:53 AM No comments: 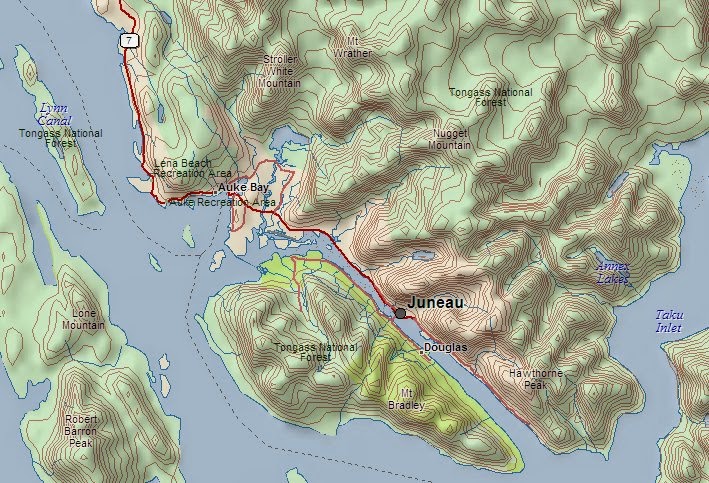 While dipnetting this past July with my college buddies Todd Laflamme and Mark Stopha, it was decided that this fall we were going to get together and hunt Sitka black tail deer where Mark lives.   Now, I'll admit right off the bat that hunting is not exactly in "my wheelhouse", but it was hard to pass up an opportunity to spend some time with friends and explore new parts of the state.

Todd and I flew to Juneau on Thursday night.  Mark picked us up at the airport and took us to his home on Douglas Island.    Not knowing any details of what we were going to do other than hunt I asked Mark what the game plan was.  He said we would leave Douglas Island mid morning on Friday and go to Admiralty Island to hunt. We would return on Monday. 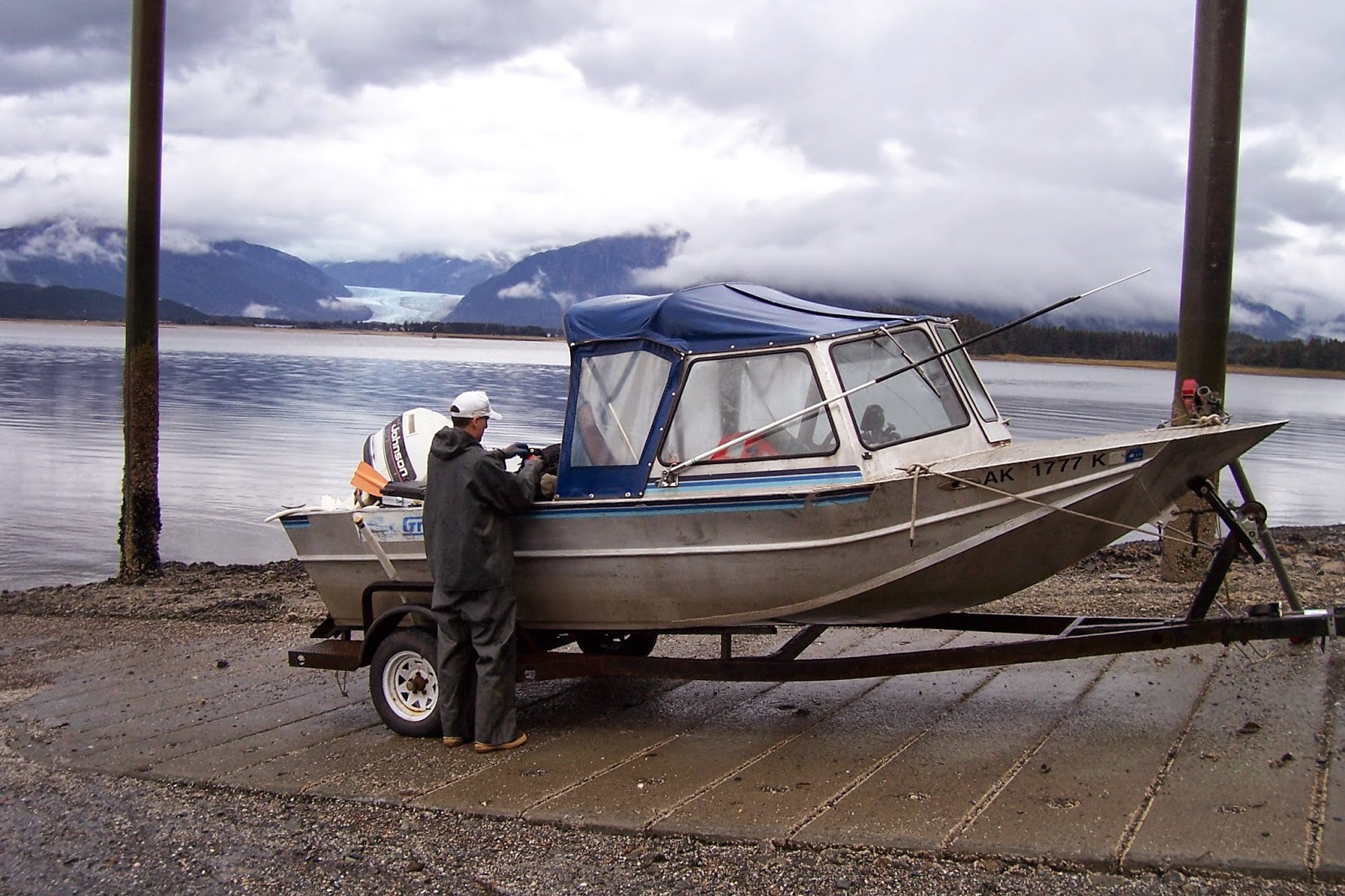 After a good nights sleep and a hearty breakfast we loaded up and headed to the boat launch. 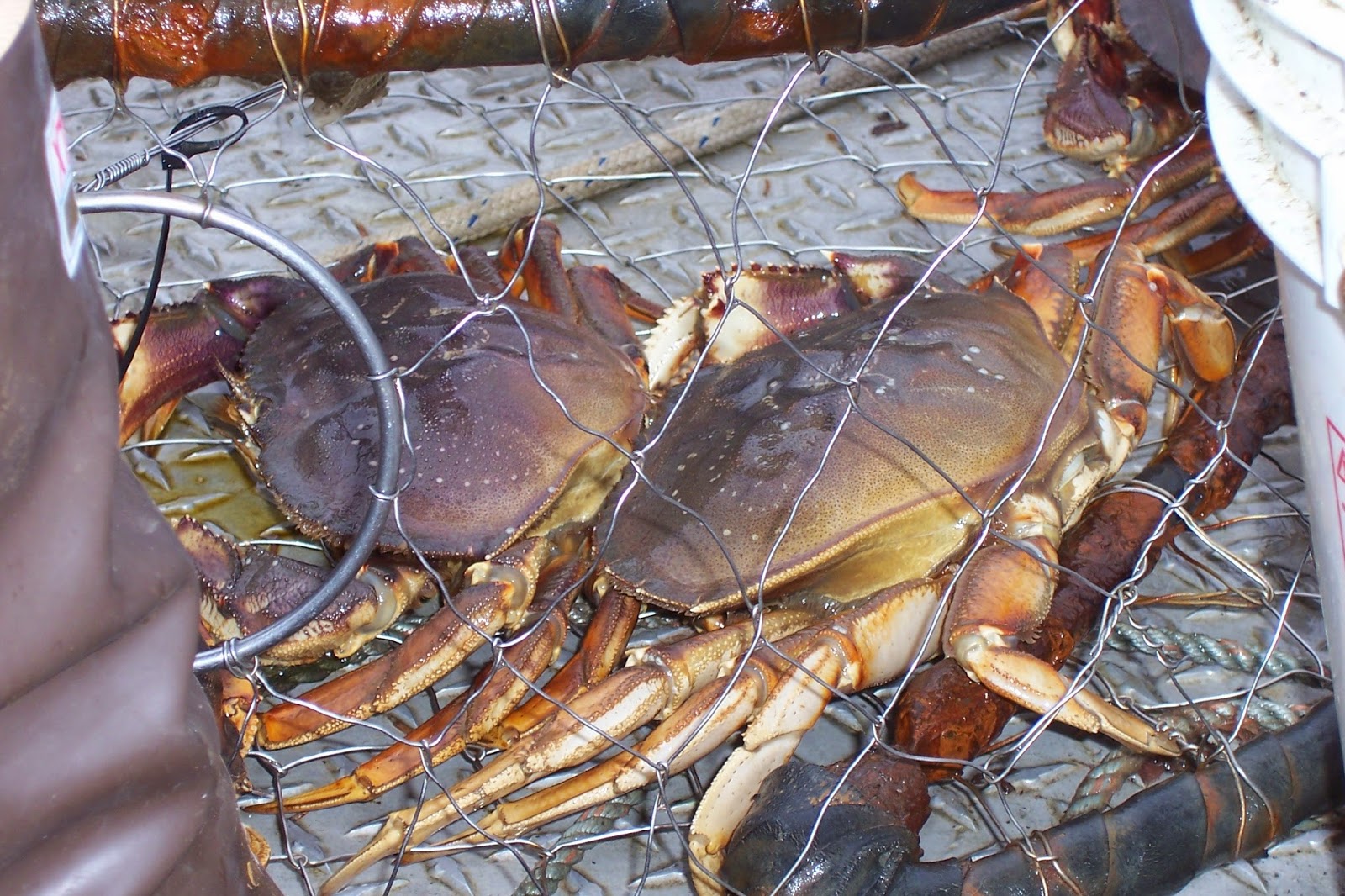 We weren't a 100 yards away from the boat launch and Mark asked if we wanted any dungeness crabs to eat. Heck ya! We pulled up a pot that would have impressed Sig and the boys on the Northwestern. 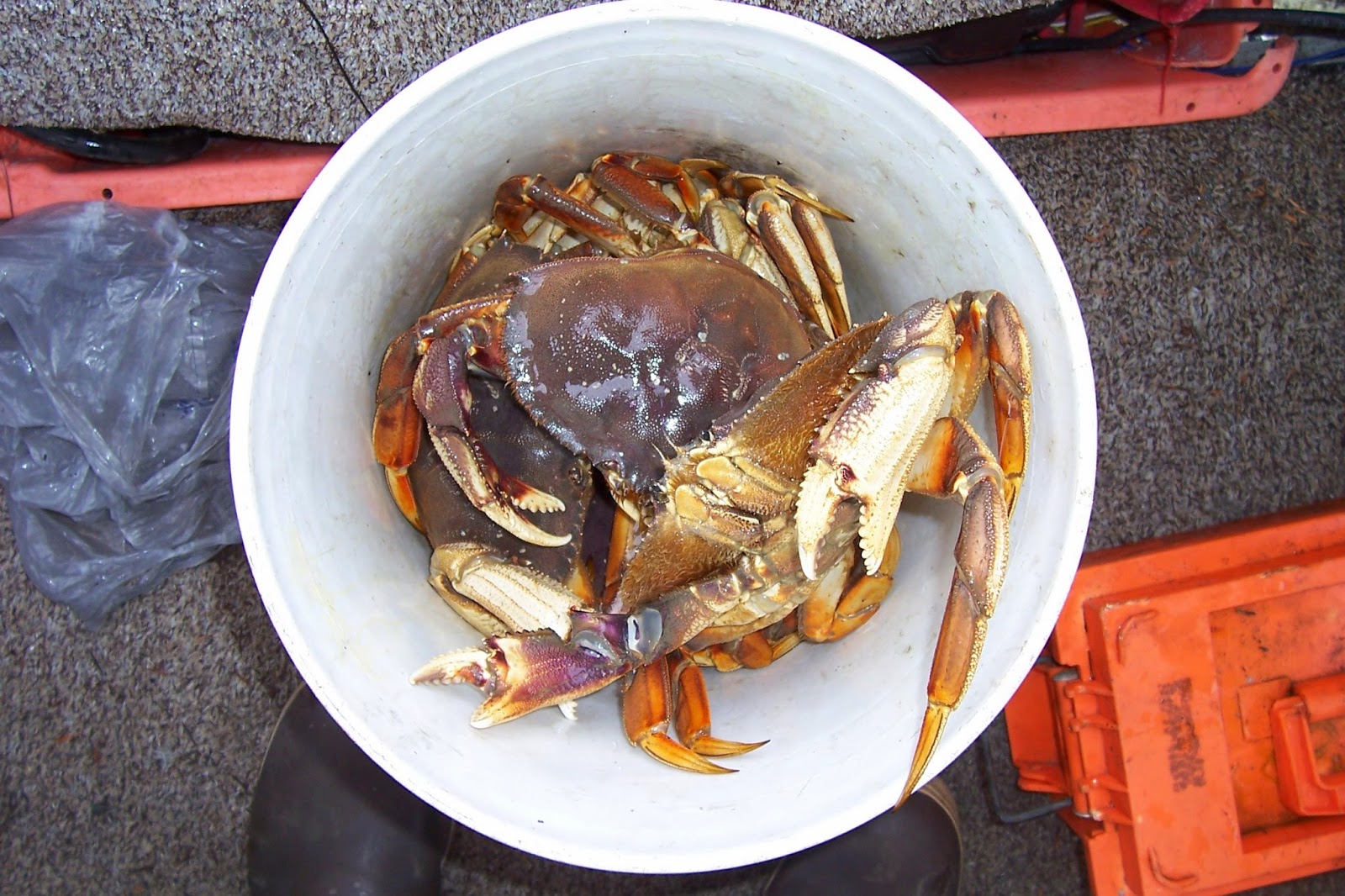 We were going to be out for three days so we only took what we needed.  This was a heck of way to start a hunt. 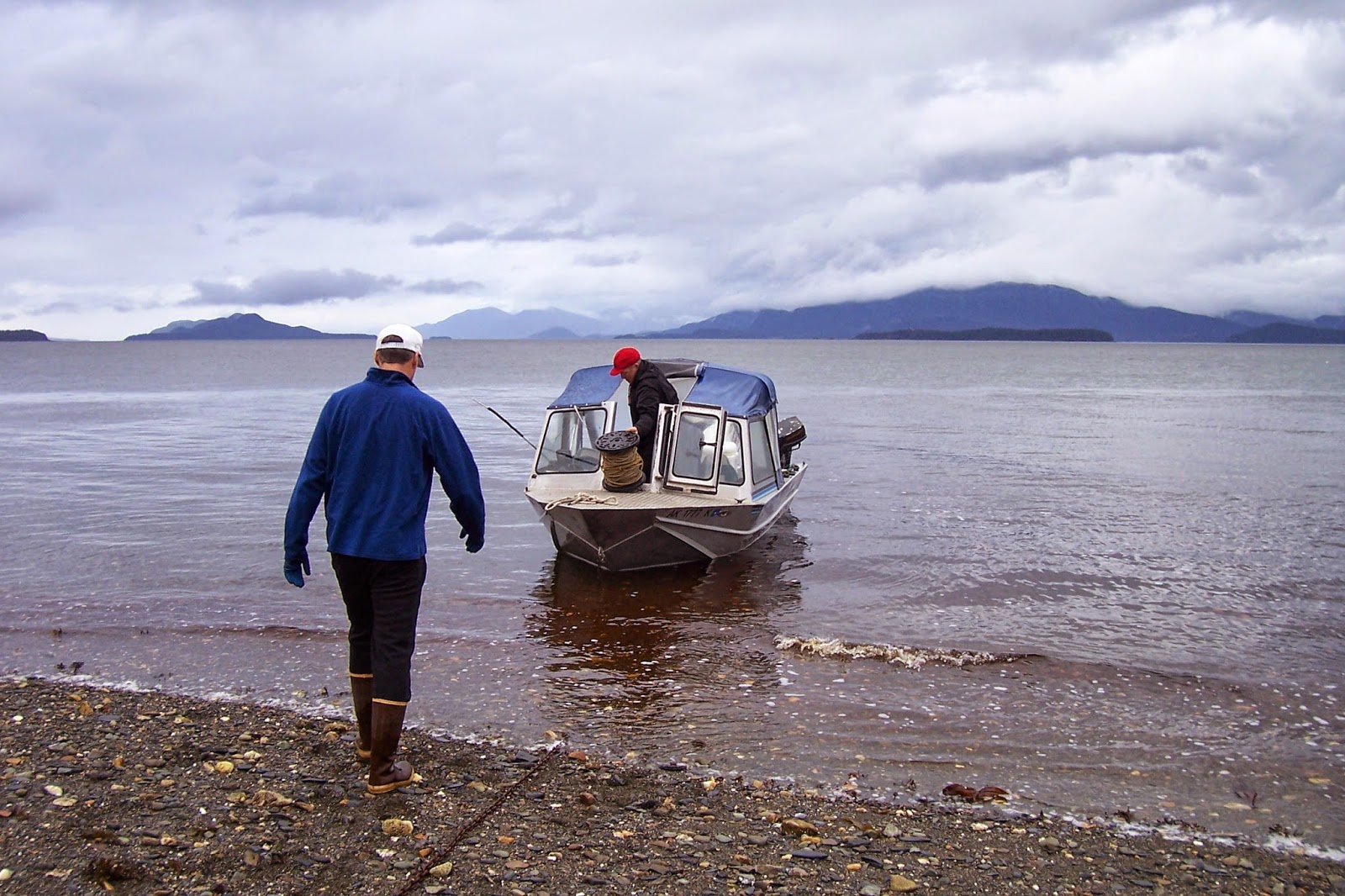 After a short boat ride we anchored up on Admiralty Island. Mark said we were going to hike up to a couple of muskegs (bogs) and hunt there.   After a 6.2 mile hike and not seeing any deer, we headed back to the boat to go to Mark's cabin on Horse Island. 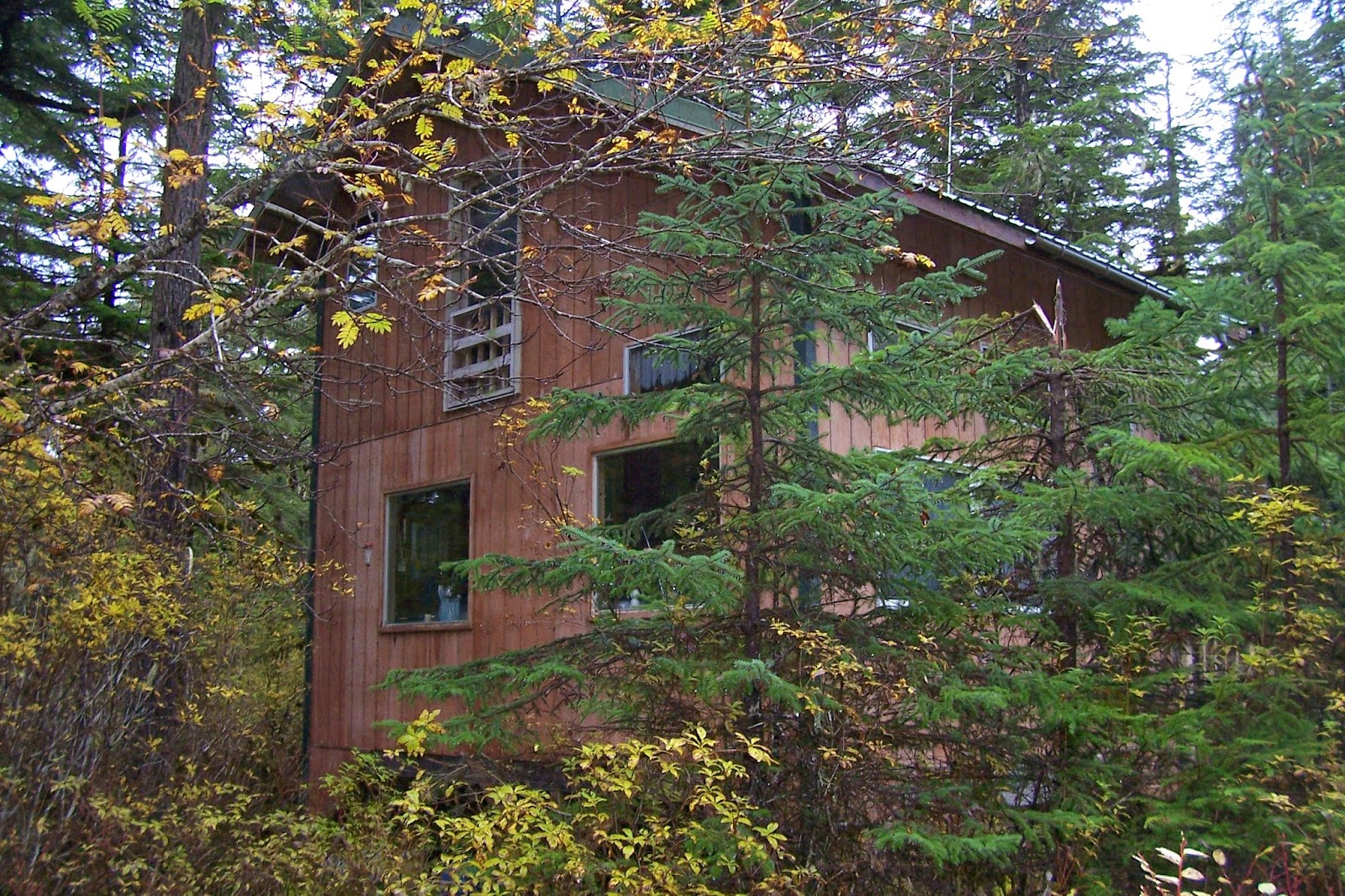 What a great cabin.  Warm, dry, and comfortable.  What more could you ask for?  If you are interested in where we were take a look at the map at the the top of the page.  We were just west of Tongass National Forest where you'll see two small islands. The north island is Colt, the south island is Horse.  West of Horse Island is Admiralty Island (our hunting grounds).   The beauty of Mark's retreat is that it's only a 20 minute boat ride from his house. 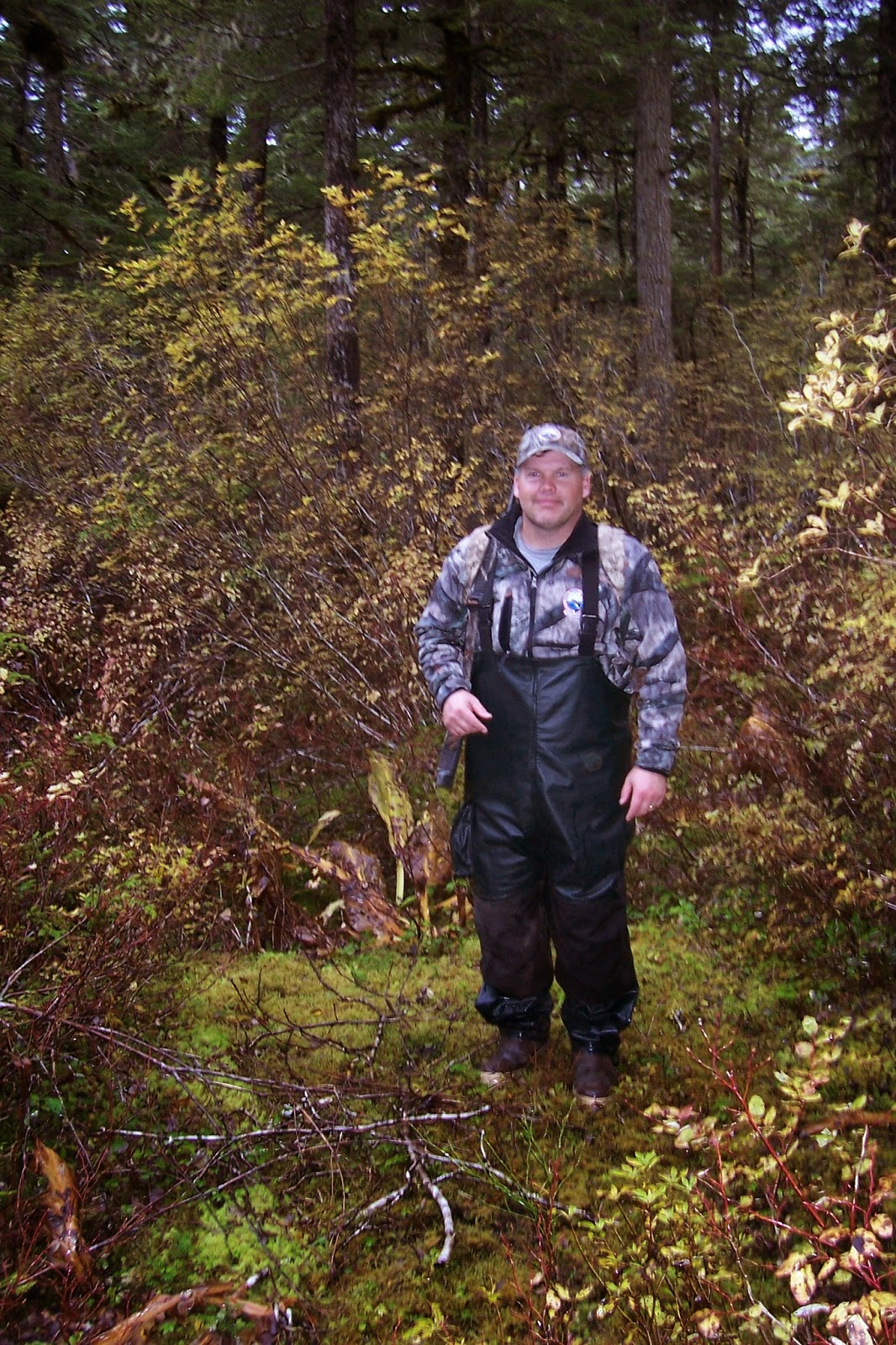 Here I am getting ready to go out.  It was kind of weird having a gun over my shoulder and not a fishing rod in my hand. 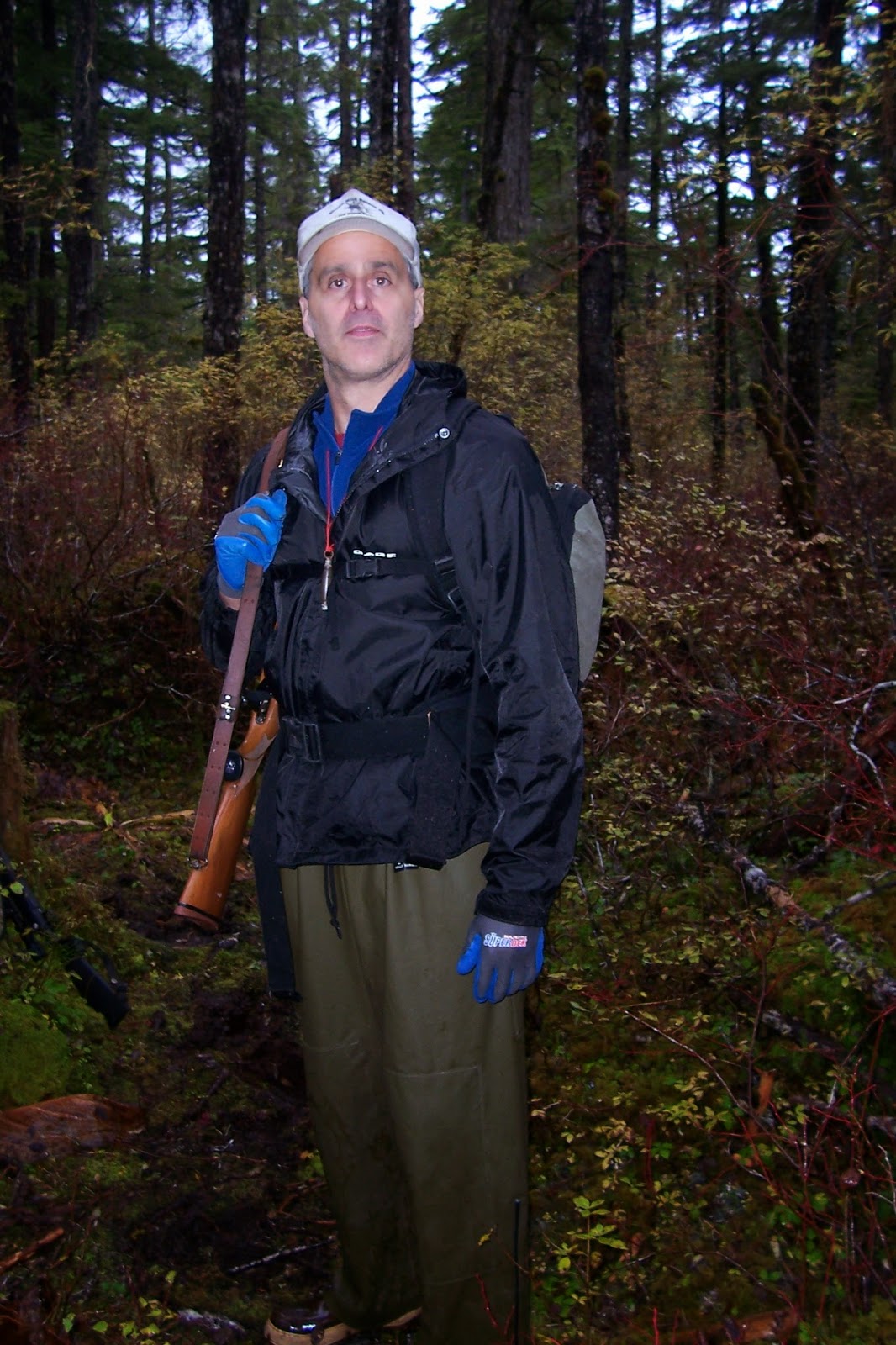 The fittest of them all, Todd, looking fresh after a long hike. 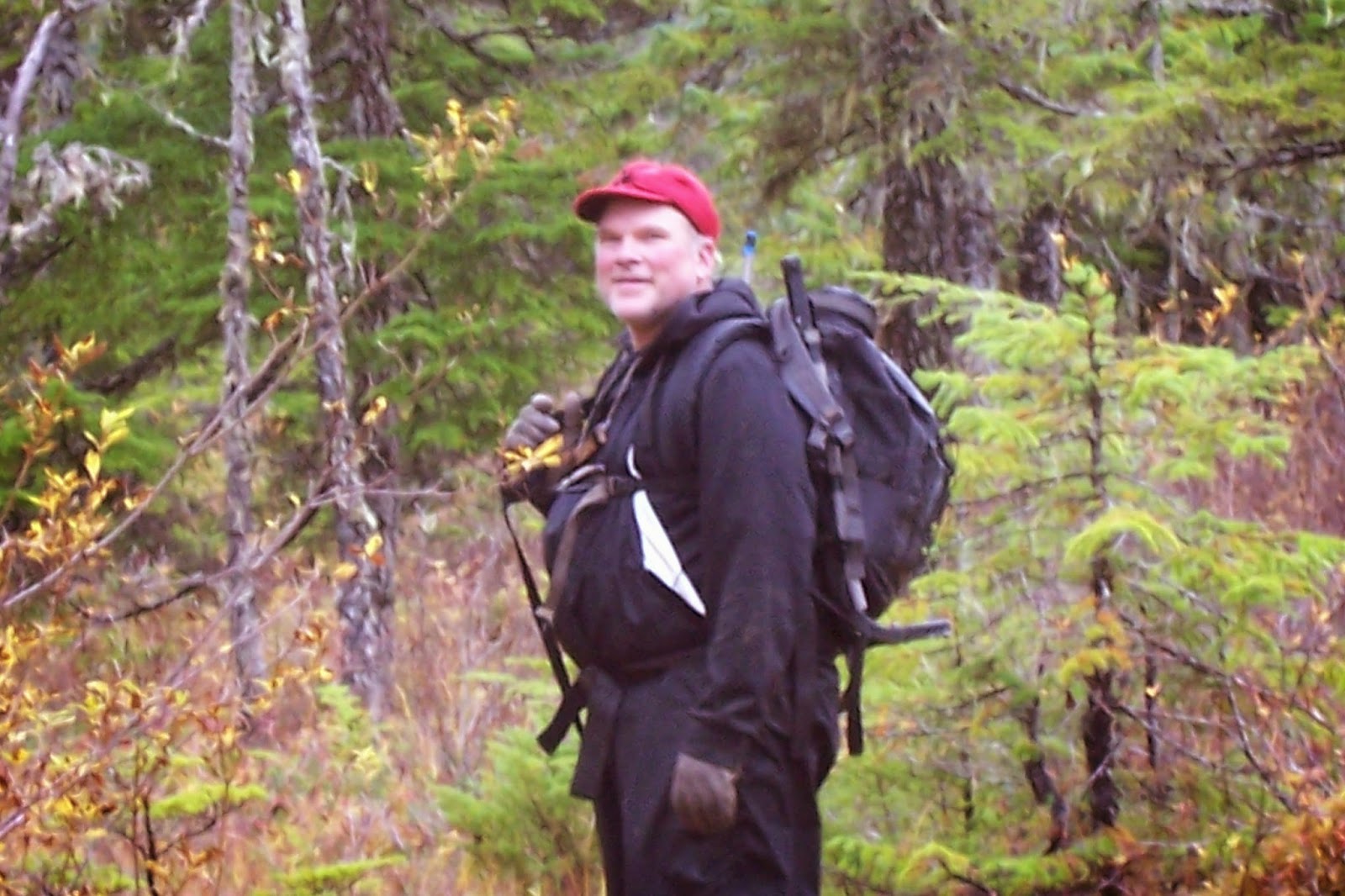 Fearless leader and host, Mark, making his way through a muskeg.

Well, that was it for Day 1.   Crab, a boat ride, and a little bit of hunting.  Little did I know what kind of adventure would lie ahead on Day 2. This is the last silver salmon caught in my boat on the lower river for 2014.  This is because during the week ahead I'll be busy winterizing my gear and getting the dock in. 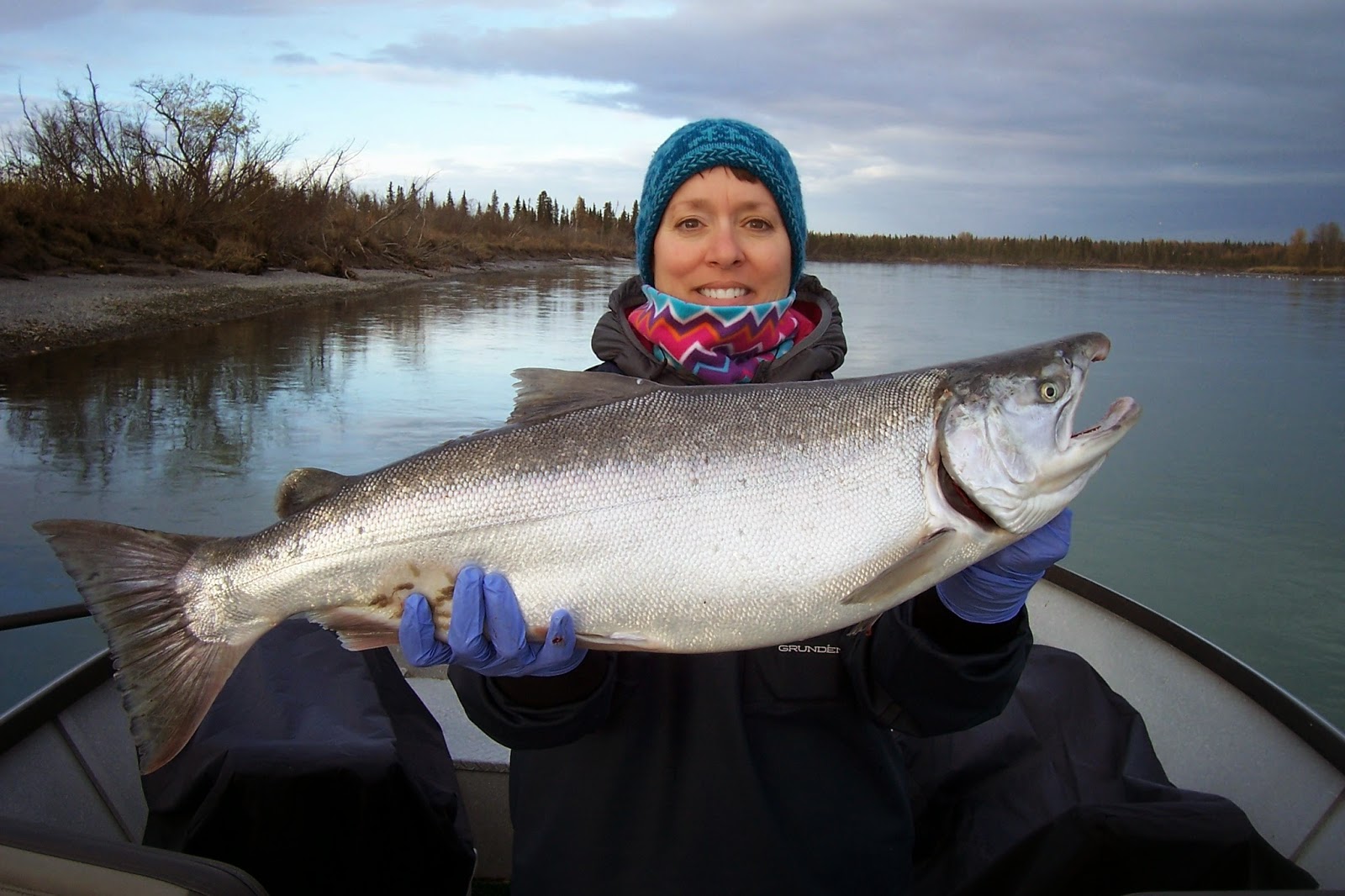 Fishing was definitely slow out there. But, this last fish is not a bad way to end the season. 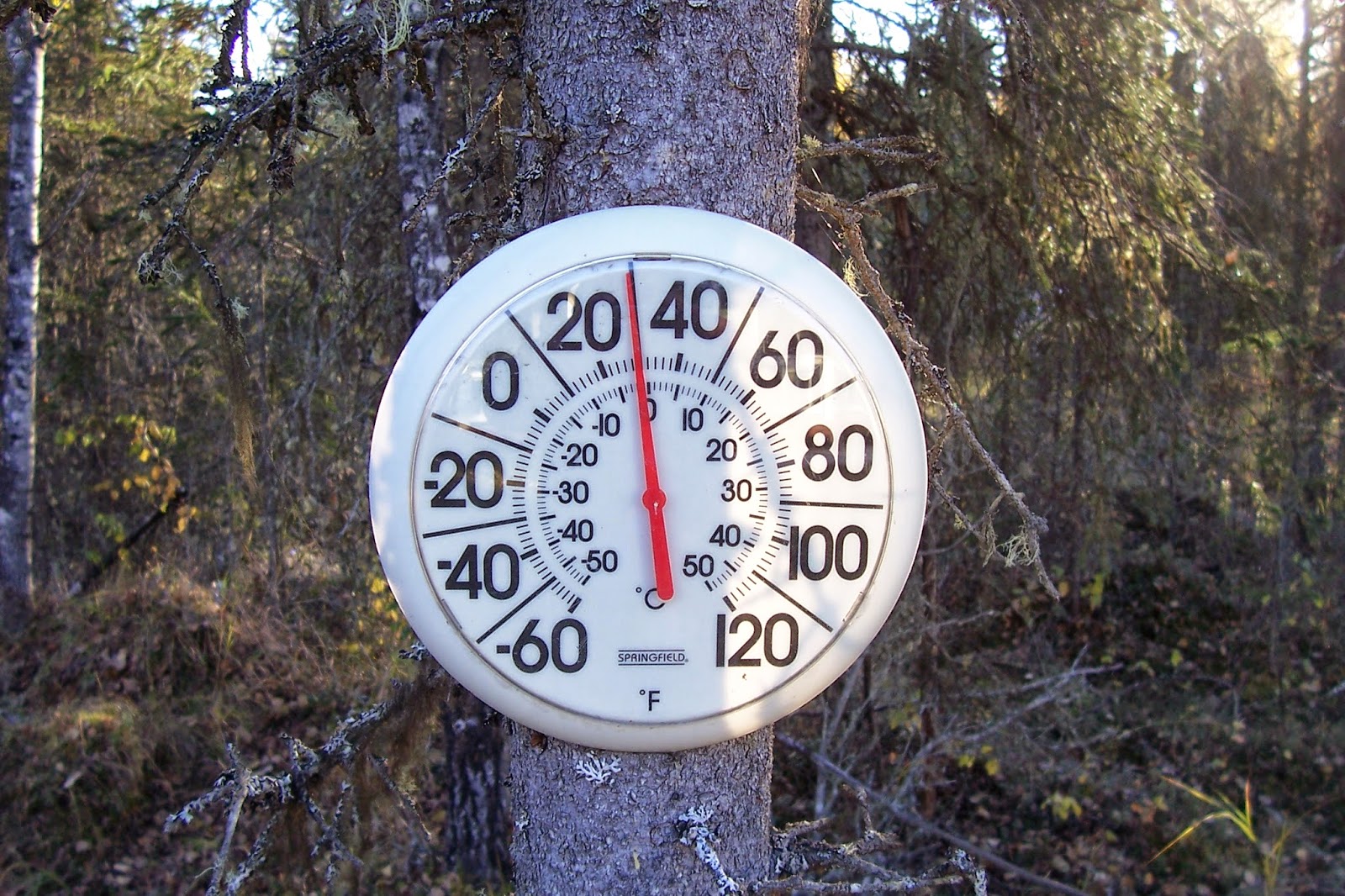 One word that described last week: cold. Not only the morning temperatures but the bite as well. 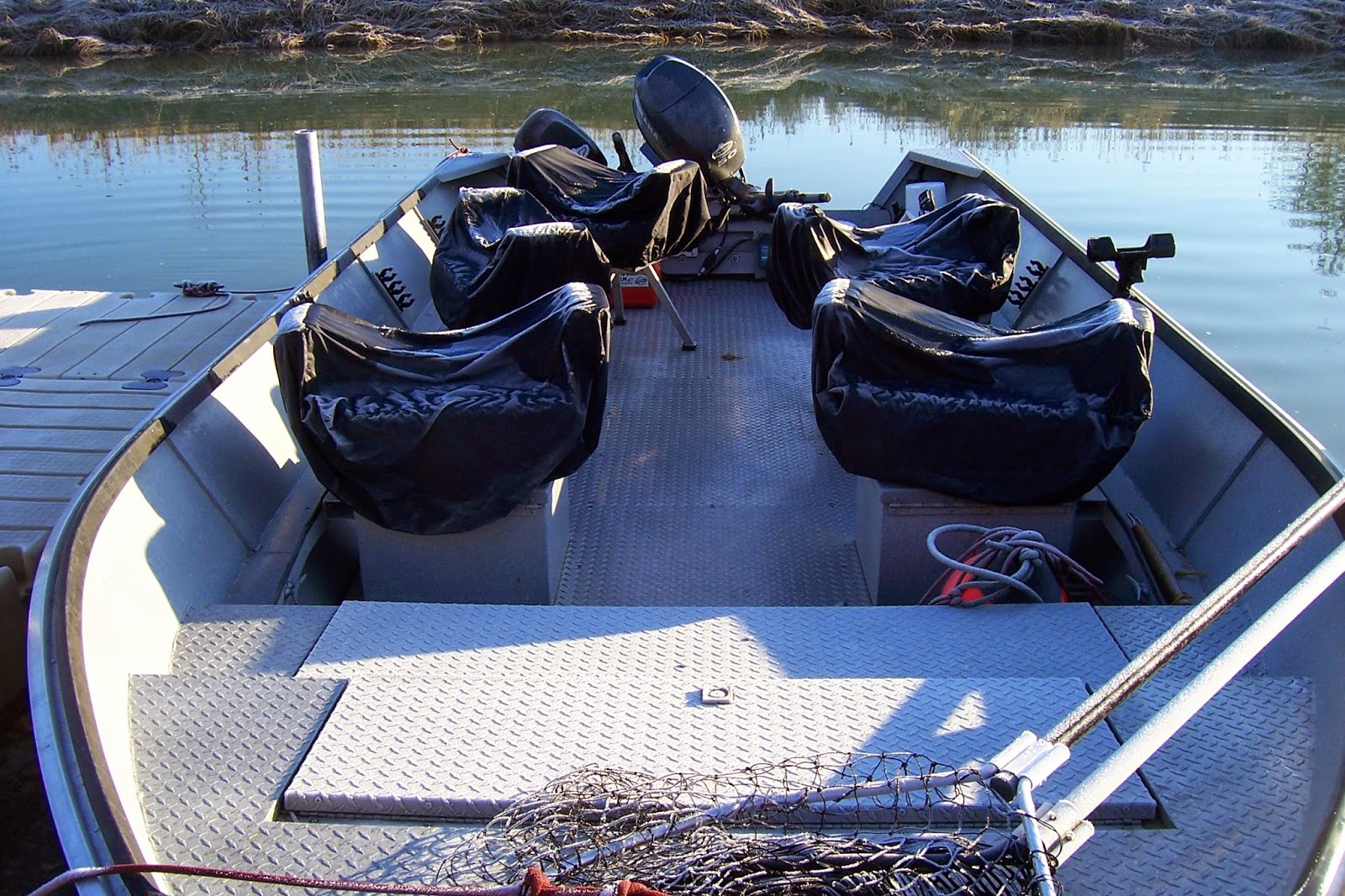 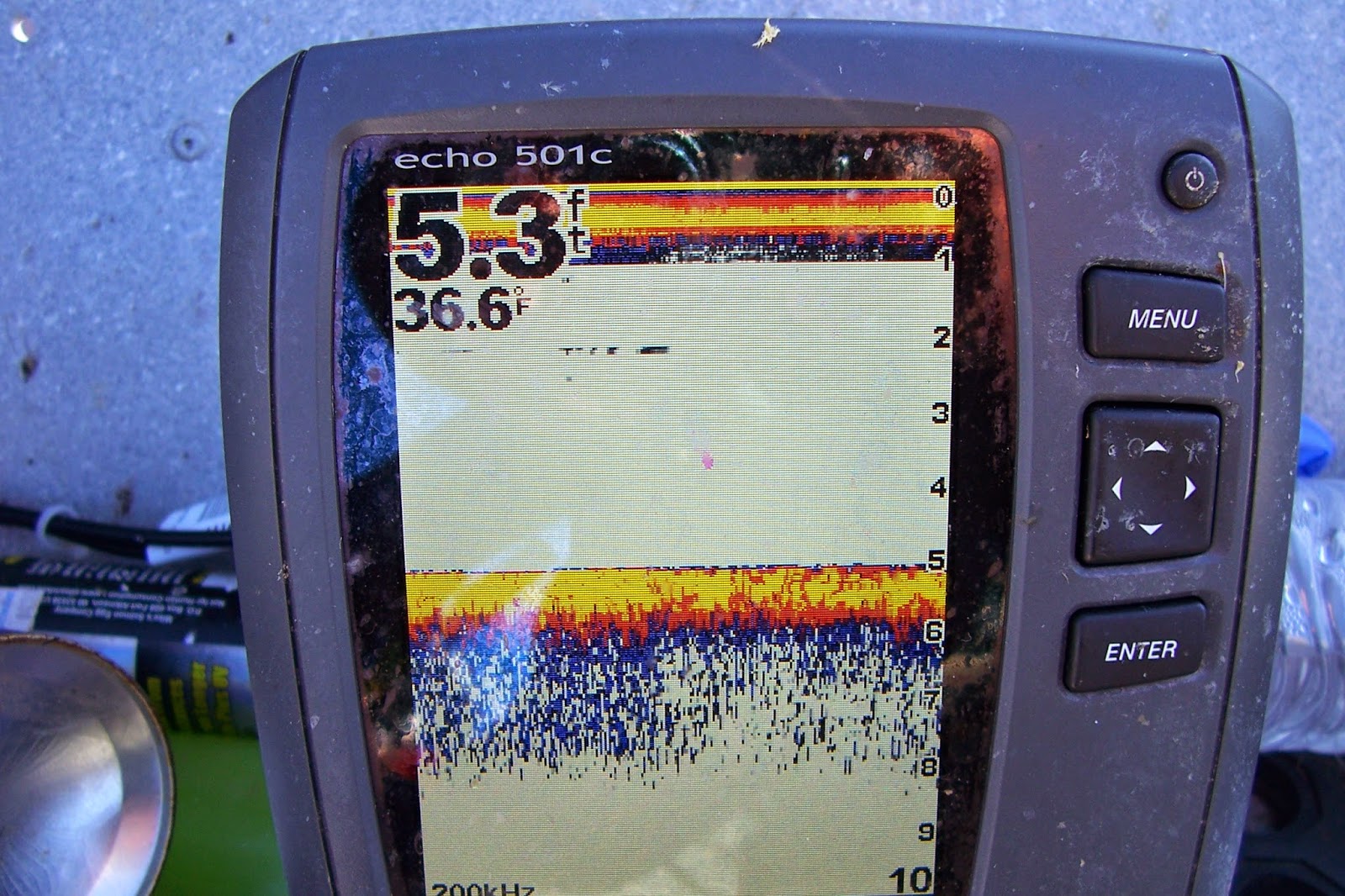 And how's this for water temperatures?

I fished almost everyday this past week and had one fish to show for it.   Some days I fished alone, some days with Jane. All I know is I enjoyed the solitude on the water which allowed me a lot of time to reflect on this past season (I will blog a recap in the near future).

In the meantime, next week my post will be a couple of days later than normal. Instead of a fishing report I will be giving a hunting report from Southeast Alaska. Should be fun and I'm looking forward to getting together with a couple of old friends.  Until then....