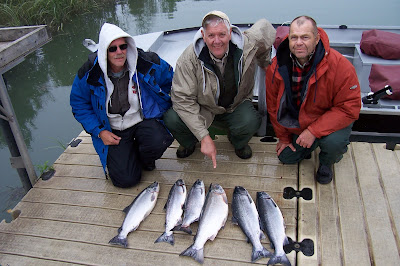 The beginning of the week the silver fishing remained hot, but by the end of the week it slowed considerably. We still caught fish but not everyone caught their limit. Pictured above is Team New Hampshire (John, Jack, and Richard). You can obviously tell that Jack caught the largest one of the day. 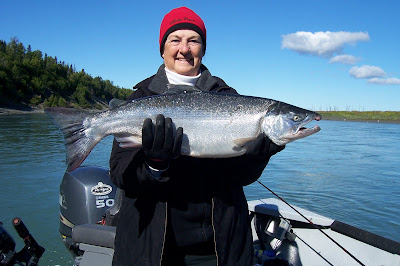 Pictured above is Gwen of "Team Banana". On Sunday I was fishing Gwen and Billie and the bite in the morning was steady. Mid morning Gwen reached for a snack and pulled out a banana. Oh boy, the dreaded banana. For a couple of hours we didn't have a bite and then Gwen hooked on to this 15lb beauty. She said "so much for bananas". After that I wish Billie would have brought one because he didn't get another bite. 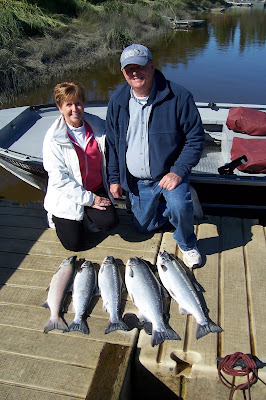 It's the ninth year that Dan and Mary Meyer have been coming to our place. There's always a certain mojo in the boat (Kit Kat bars?) when they show and the fish sure seem to cooperate for them. 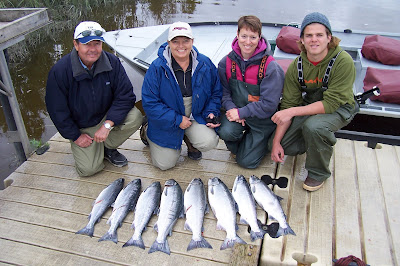 Here's the morning results for Vern and Nancy Gulliksen, Jane, and Lars. We sure enjoyed our time with the Gulliksen's and after purchasing property nearby we can now officially call them neighbors. 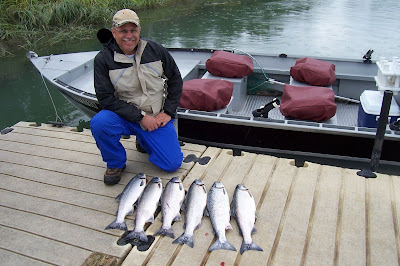 Here's Ron of Team BP. The other guys in the boat didn't want to be in the photo so that only makes me believe that there might be an outstanding warrant or two out for them. Ha! Just kidding. I had a blast spending the day on the water with Team BP and hope to see them again.
We are in the middle of some very large tide cycles this week and based on how the last couple of days fished I'm thinking that we'll have to put our time in to catch our fish. Every day is new so it should be interesting.
Posted by Beaver Creek Cabins & Guide Service at 12:17 PM 3 comments: 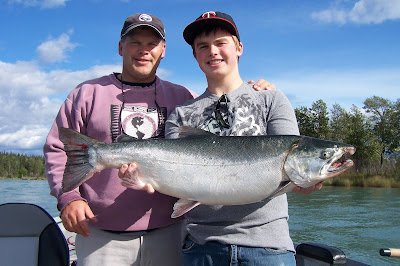 Hi ho silver! What a great week of fishing. Lots of silvers kept and lots of silvers released. The picture above is a father/son moment of Mac and me fishing the Kenai in the evening. Mac is on his way to college this week so it was nice to spend time in the boat with him. No doubt the kid has the Holtan luck. 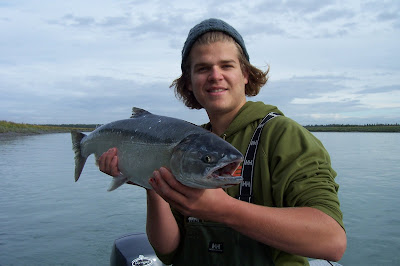 Here's Lars Ohlin with a nice Kenai silver. This is the fourth year that Lars has been coming to the Kenai. For a young man he sure is becoming an old pro. 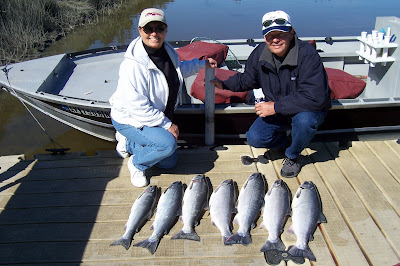 Verne and Nancy pose with a quick morning limit. They're scheduled to fish with me a couple of more times this coming week and regardless of the bite their attitude will make the day an enjoyable one. 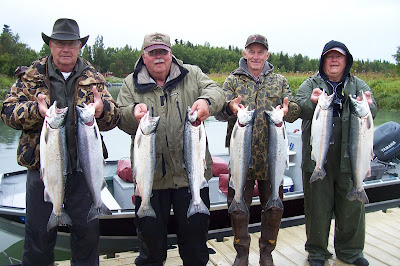 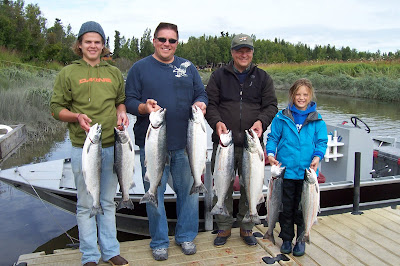 Lars and Team Lehtola had no problems reeling in their fish. I think all the Minnesota blood in the boat proved to be too irrestible to the fish.
I think the week ahead should be steady fishing. Some days better than others but nonetheless it should continue to be very good.
Posted by Beaver Creek Cabins & Guide Service at 2:40 PM 1 comment: 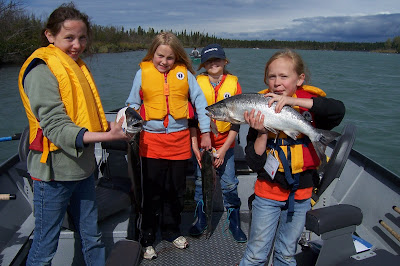 Fishing this past week was a little bit like the weather....sometimes hot, sometimes not so hot. All in all it was a great week to be on the water. Pictured above are four girl scouts that I fished in Senator Lisa Murkowski's Jr. Classic fishing tournament. Hey girls, thanks for the Tagalongs! 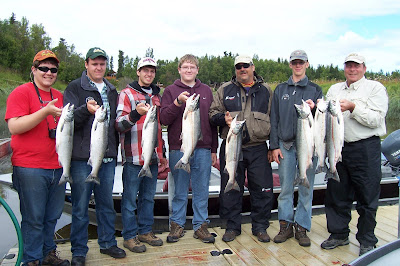 Not to be out done is Eagle Scout troop 389 from Mahtomedi, Minnesota. No doubt we had to work for these fish but it was a lot of fun hearing about what these guys have done in Alaska and what they have left to do. 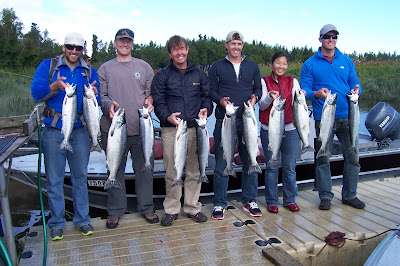 Team Beavers from Oklahoma (two "outsiders" from Colorado came as well) proudly display their catch. It was a terrific day on the water but not quite as fast and furious as their saltwater trip the day before. Glad I could slow things down a bit for you so you could recover. 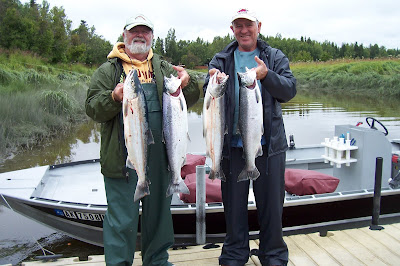 It was great to fish with Minnesota Dave and Missouri Dave once again. Great guys who make my day really enjoyable. Hope to see them again during the pink/silver run next year. 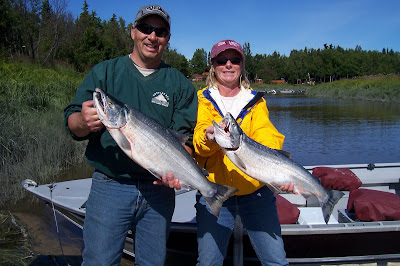 Finally, Bob and Sue Slaybaugh hold up a couple of nice silver salmon. Great weather and as they would say in Nisswa, "pretty good fishing".
The week ahead should be much like this past week. An early morning bite and then living and dieing with the tide cycles. Should be fun and challening.

Posted by Beaver Creek Cabins & Guide Service at 9:40 AM 3 comments: 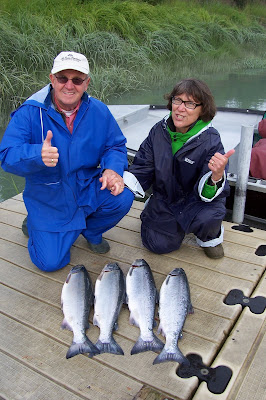 The guided silver salmon season officially began on Tuesday, August 2nd. It was less than stellar. Let's just say on Tuesday, Wednesday, Thursday, and Friday we caught more trout than we did silver salmon. As my dad would remind me, "you can't catch what's not there."
However, on Saturday and Sunday the fishing improved dramatically. The fish were "there". The photo above is Dean and Nancy posing proudly with their fish. 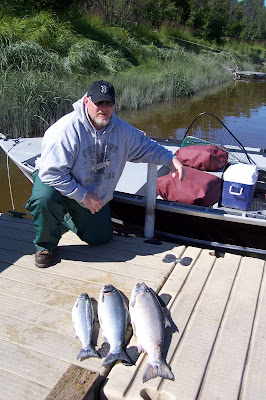 Here's Toby kneeling next to the fish that he caught with his brother-in-law Ron. Toby will quickly point out that they caught more fish but decided to let 'em go so they could spend more time on the water. It's always fun to make it a day on the Kenai. 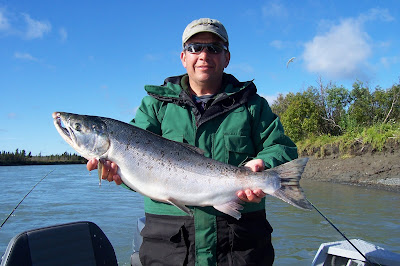 Here's Ron posing with a 14.5lb silver salmon. Very large for this time of year and it surprised the both of us when it came to the net. 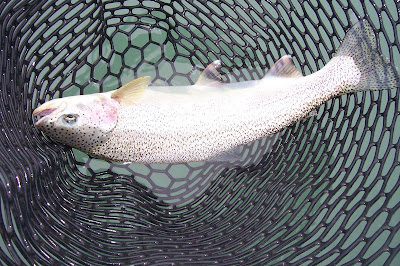 Decided to add a photo of our silver salmon bycatch. Here's a beautiful 20" lower Kenai River rainbow trout.
Based on how the king fishing ended, the first week of silver fishing was as I anticipated.....sketchy. From here on out until September I expect the fishing to be consistent.
Posted by Beaver Creek Cabins & Guide Service at 1:15 PM 1 comment: 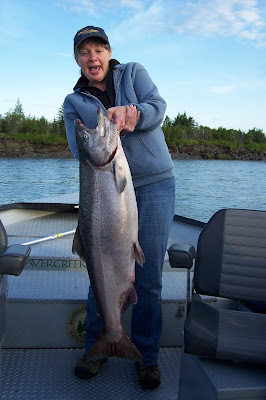 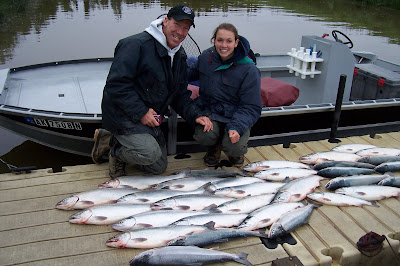 Here's Tony and Shelby with a mess of red salmon. 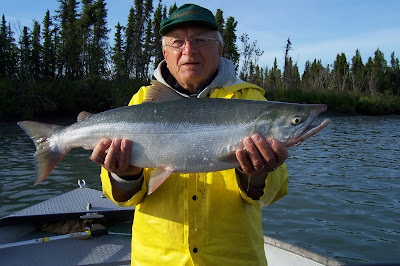 Gene is holding a nice red salmon he caught back bouncing for kings. 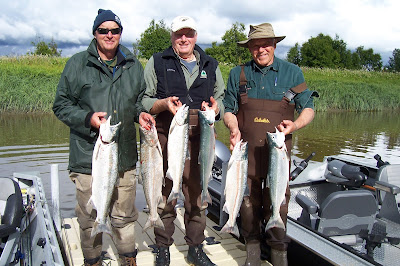 Nothing but trouble for these three guys. Nice job on the reds, Bill, Dave and Carey. 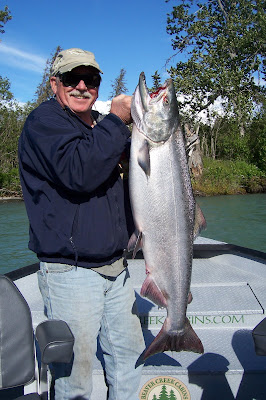 It was interesting that when Wayne jumped in the boat he had to pull out a photo of a king he caught with me three years ago. Although this one didn't match the 58lber he caught back then, it was an impressive fish to catch without bait. The man is a perfect two for two on the Kenai. I told him he's on a roll and he needs to pack up and head to Vegas....
Posted by Beaver Creek Cabins & Guide Service at 10:45 AM 1 comment: