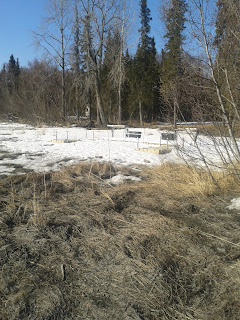 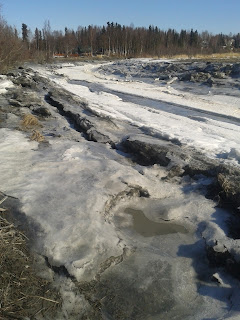 .....not in! I can't believe that we didn't warm up enough to break the grip of winter on Beaver Creek. I really thought it would happen on the April high tide cycle, but it didn't. The main stem Kenai River is open so it won't be long, but unfortunately the dock will have to wait for the next high tide cycle,  May 25th-27th.
I have a handful of trips before the dock goes in so I guess it will be "out of the bed and go to the boat launch" for us.
Posted by Beaver Creek Cabins & Guide Service at 6:40 PM No comments: 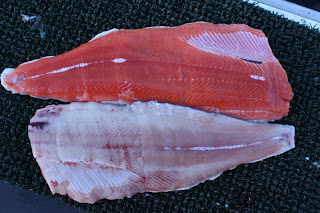 We all know there are red king salmon swimming around Alaska and the Pacific Northwest.  But did you know there's an "Ivory" or white king too?   The photo above is a side by side comparison of the two.   Strange, isn't it?

If you haven't heard of a white king it's probably due to the fact that only 5% of the total king population are white kings.   There aren't many found in our area of the state, mostly around Homer, so if you're determined to catch one I would suggest your efforts should be focused in Southeast Alaska and British Columbia.   It's estimated that 15%-30% of the run in this area are white kings.

What causes the flesh to be white?   The normal deep red color of salmon flesh comes from it's diet of crustaceans (shrimp, krill, crab).  According to the biologists, white kings due not have the ability to process the pigments that are found in crustaceans and that is why their flesh is white.

What does this mean for the flavor?   A white king is oiler, hence tastier.   Last fall was my first time trying white king.  A friend of mine caught one in Prince William Sound and I thought it was absolutely terrific.  Probably the best I ever had.

So, if  you don't catch a white king while you're in Alaska can  you buy one?   Yes, you can buy them at a fish market but you're going to pay almost twice as much per pound than you will for other salmon.   It's a simple case of supply and demand:  if you have less white kings you charge more.

Well, that's it.  That's all I know about white kings.  If you found this fish oddity to be of interest be patient........I'll blog about left handed halibut one day!


Posted by Beaver Creek Cabins & Guide Service at 8:25 AM 2 comments: 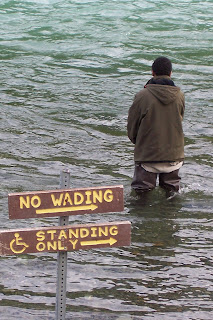 In their 1971 song, "Signs", the Five Man Electrical Band sang....."Signs, signs, everywhere there's signs.  Blocking out the scenery, breaking my mind.  Do this! Do that! CAN'T YOU READ THE SIGNS?" 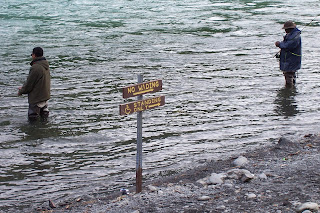 Some of you may recognize this spot.  For those of you who don't, this is where the Russian River ferry crosses the Kenai River.  Anything wrong with this picture?
Needless to say this really bothered me.   What gets me the most is this area is set aside for fishing for people confined to a wheelchair.   I was going to talk directly to these two but quickly realized that reason and understanding wouldn't work with people who "couldn't read the signs."  When I traveled back on the ferry I told a park employee that people were wading in the no wading zone and fishing in the handicap accessible area.   They told me thank you and I went on my way.   I just hope they used their position to educate these two about the signs.
Posted by Beaver Creek Cabins & Guide Service at 6:20 AM No comments:

This One Is For the Dad's 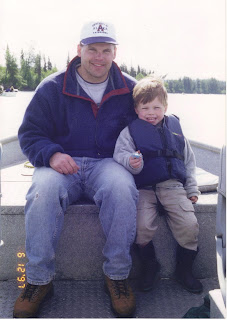 Click here to view a fantastic video clip of a father and son fishing adventure.

How can you not like this?  What a great video of a day with a father and his son. 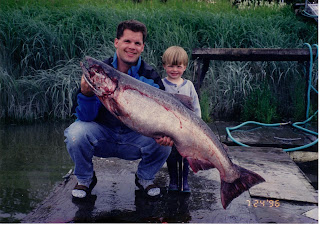 This is a shout out to my son Mac, and to thank him for all the fun times I had while he was growing up and for all our adventures yet to come.
Love,
your Dad
Just one more thing....
﻿ 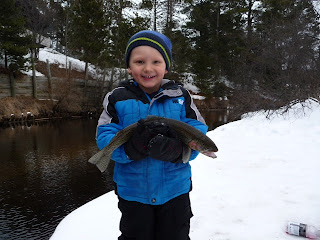 After I had written this post the photo above was sent to me from Christy and Jeff Provost of their son Joey proudly holding his very first steelhead.  Christy told me that when Joey caught this fish he asked his dad if they were going to eat it.   He said no.  Joey asked if it was a momma or daddy fish.  His dad told him it was a momma fish.  Joey said let's let it go so she can have more babies!   Thanks for sharing this great story and allowing me to pass this along to the readers of this blog.
﻿
Posted by Beaver Creek Cabins & Guide Service at 8:36 AM 2 comments: 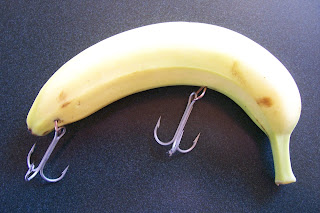 
Look out Luhr Jensen and Worden.   There's a new kid in town.

The hottest lure on the Kenai River for 2013 just may be the RZ16.   According to lure inventor L. Harv Pearson, "I noticed a trend on the Kenai that if a boat had bananas on board they caught more salmon.  I thought why not fish with one?"

So, after several years of onwater testing by a select group of Kenai River guides, Pearson knew he found the exact lure to ensure a successful day on the water.   "I knew we had something special," said Pearson.   "I'm amazed how many salmon they caught."

Boo Kandas, long time Kenai River guide says, "the beauty of the RZ16 is you'll never have to use a messy sardine wrap again.   The natural oils and potassium triggers salmon into a feeding frenzy."

The RZ16 is now being sold to the general public and can be found at all major sporting good stores.  They are sold individually or you can buy them by the bunch.   At this time the RZ16 comes in one color: LIRPA SLOOF.


Posted by Beaver Creek Cabins & Guide Service at 1:29 AM 2 comments: