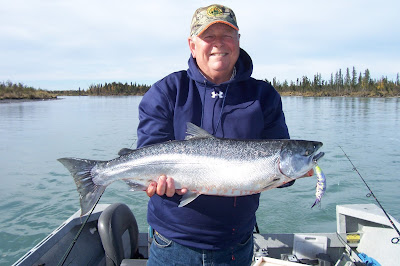 Not much to report because I didn't do a lot of fishing last week. Oh, I wanted to, but I'm saving my effort for when the water conditions improve. Based on the rain fall last week and the current forecast, I would think by Wednesday or Thursday the river should be back to normal.

On to the (limited) report...Just before the deluge of rain, new neighbor and old friend, Dan Meyer and I went out for a couple of hours. Dan's Funky Chicken kwikfish has been on fire this fall and this day was no exception. All bites and all fish came on this lure. I offered him a $100 for it but apparently that's not enough money for a proven swimmer. 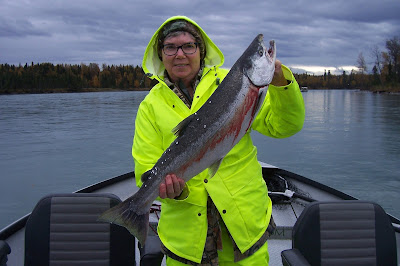 The next day the rains began but it didn't stop Dick and Kim Miller, Jane, Dan and I from going out out for a few hours of fishing. Jane caught a couple of silvers and Kim caught this one. Once again, they proved that women catch more fish than men. We all went out the next day but the conditions were just too tough to have a chance at catching any fish.  We called it after an hour... 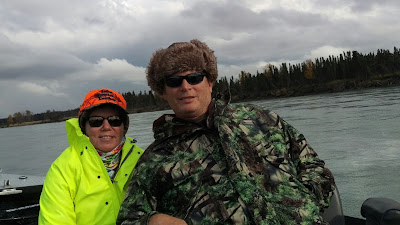 Dick and Kim Miller could very well be out last clients of the year. If so, what a great way to end our season. These guys are very good friends, I kinda hate using the word "client", and we enjoyed the time on and off the water together. See ya guys down the road! 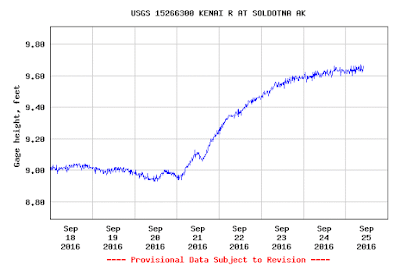 Thought I'd end this post by showing the US Geological Services graph of water volume on the Kenai River. For this time of year the trend should be downward. But, as you can see, several inches of rain can have quite an impact on the water flow. The good news is the weather forecast this week is clear and cool. That should do wonders for clearing up the river.

Make sure to come back next week to see if the fishing and the river conditions have improved. 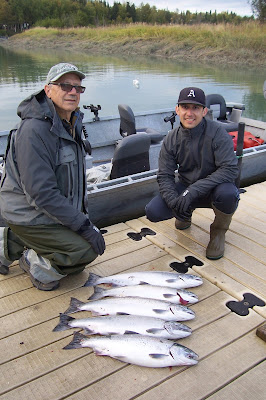 The fishing this past week has remained the same.....steady, slow. Since I didn't have a full week of guiding I had some time to reflect on the silver salmon season. Since August 1st, we've caught no less than two silver salmon on every guided trip. This, could be a record for my boat and speaks of the consistency of the run. However, the frequency and total daily numbers are not what I and other Kenai silver fisherman have grown accustom to. Overall I'd say it's been a mix of humble pie and frustration. What has stood out the most to me this silver season, the "silver lining" if you will, is that my clientele has been outstanding. I want to say thanks for reminding me that it's effort and attitude that's in my control; what the fish decide to do is not.

Since I didn't have a full schedule this week, I'm using a photo that I should have posted on the prior week's report. Above is Joe and Rafeal from an evening trip we took. Pretty good action considering we were one fish short of a limit. 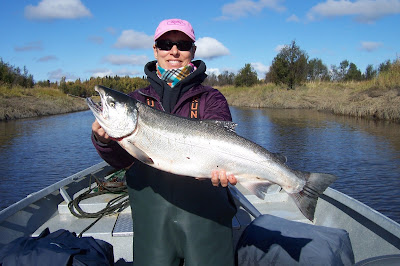 I promised you I would get Jane out this week and we found a couple of hours to fish. We're slowly starting to fill our freezer. 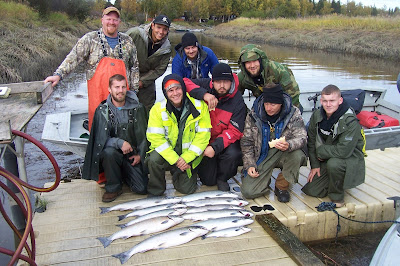 Friday, I had the pleasure of being out with Team ABC Seamless from Anchorage. An okay bite with cold and wet conditions didn't dampen their spirits. 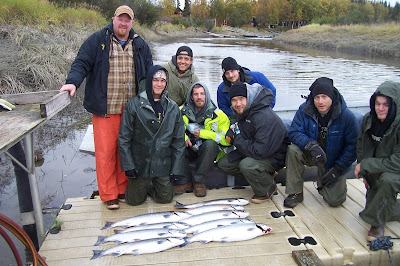 Saturday was Day Two of fishing with Team ABC Seamless. It was better weather but the bite was a little bit off from the day before. Thanks Jeff, for bringing down the crew once again.
This could be the end of my guiding season. I have no other bookings on the calendar. However, I have hunch that I'll have some walk up business before I winterize my boat. Even if that doesn't materialize I plan on fishing myself at every opportunity. Come back next week to see what we caught. 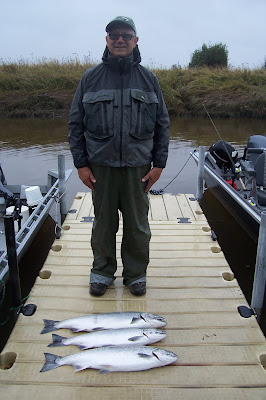 The first day of the guide week was like the last day of the previous week. It was wet and only a handful of silvers were being caught on the lower river. Here's Joe with the morning haul. I was underwhelmed with the catching but was reminded that three silvers are better than none. Way to keep a positive attitude guys, even though your guide had a lot higher expectations. 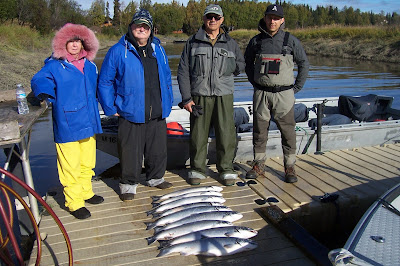 The next day felt like old times for a couple of reasons. The first is I was guiding long time guests Judy, Bob (yes, he made the photo and was the first to limit out), Joe, and Rafeal. The second is the silvers were biting they way they're suppose to. 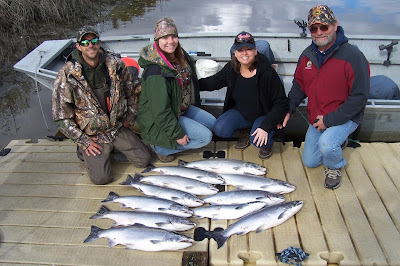 The fishing remained hot the next day. I had the pleasure of fishing with former Kenai residence Ernie and Bonnie Rimer, who brought their daughter Easton and son in law Andrew to see their former hometown. I have a strong hunch that when it's time to retire these two will return to their roots. 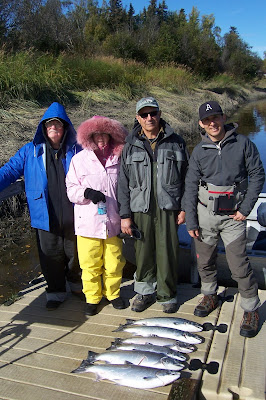 On Friday the bite started to slow down a bit. Still, not a bad effort on a great weather day. I'm glad Bob and Judy ended their 2016 trip to Alaska by catching fish. See you guys next year! 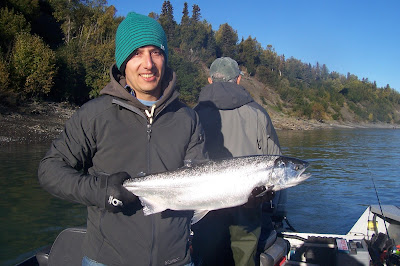 Saturday was the last day of fishing with Joe and Rafeal. The early morning bite wasn't happening so Rafael decided to grab a spinning rod and cast a Vibrax. I told him I hadn't seen a silver caught on a spinner in three weeks. That was all he needed to hear to prove me wrong. This silver put up one of the most acrobatic fights of the season. That was a good thing but there was some bad catching this fish. At one point during the battle, Rafael lost his rental car keys into the river. Ouch, bummer deal. Rafeal spent the next four hours on the phone trying to find a solution to this problem. 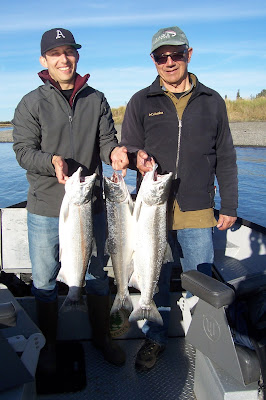 Not wanting to end his vacation on such a sour note, Rafeal said, "screw it, let's go fishing." So we resumed our trip. It didn't take away all his headaches of dealing with a rental car company, but it was nice to be in good weather and to be able to catch a few more silvers. 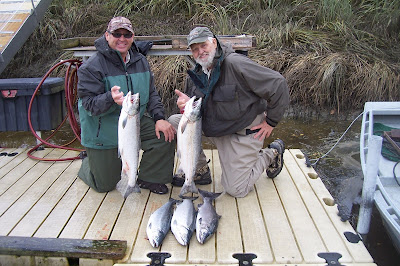 The final day of the week I had the pleasure of spending the morning with these two Texans. Rick and Vern worked in a fishing trip before flying out for a week long bear hunt. They'll be staying in our cabins on their return and I'm sure they'll share a few stories about their adventure. Can't wait to hear them.
So I'm sad to report that leaves are starting to fall off the trees and frost is appearing on my boat seats These are signs that my guiding season is almost over. I'm not guiding every day this week (my first break in a long, long time), but plan on being on the water every day. In between the scheduled trips, Jane and I will be going out. Our freezer is low and it will be nice to have a chance to sock away a few salmon for the winter. I'm keeping my fingers crossed that the silvers will be there because Jane is one tough customer if she's not catching fish. Ha!
See you next week. 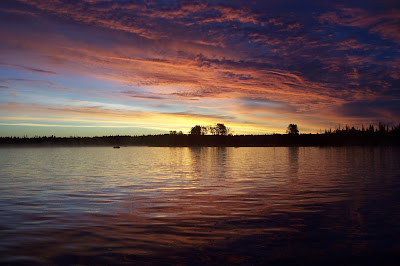 What a week of weather, fishing, and fellowship. Two of the three were outstanding, and the one that wasn't was the fishing. It wasn't bad mind you, it just wasn't as good as we've become accustom to during the years that Gary Blinn and his crew have come to the Kenai. 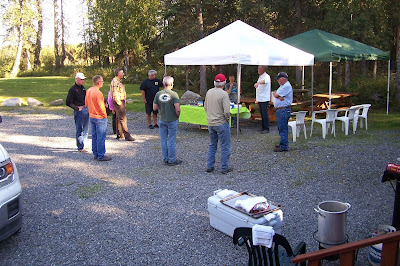 As I've mentioned in previous posts, the barbecues are always a highlight during the Blinn weeks. On the menu Sunday night was crab, more crab, salmon on the grill, dump cake and ice cream for dessert. 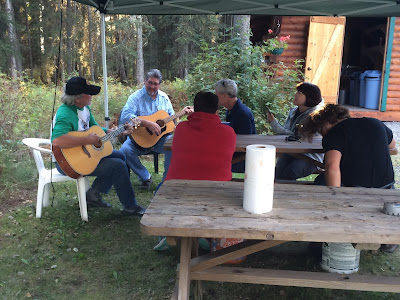 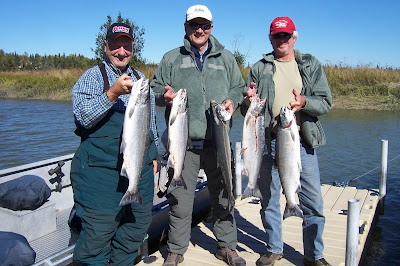 So on to the fishing report. Here's Howard, Rick, and Clint on the first day of Blinn Week number 3. Not a bad way to get 'er going. 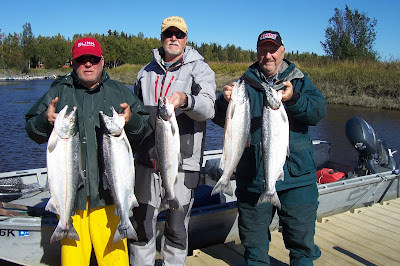 The next day Steve, Gary, and Howard were in my boat. Not fast fishing by any means, but with perserverance we were able to land these silvers. 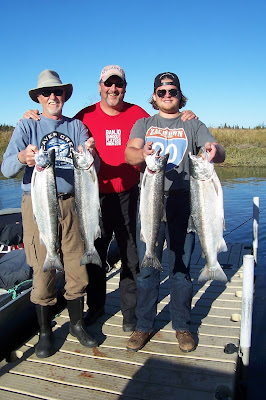 Long time family friends from Minnesota, Lars and his mom Cori, came to AK this week for a vacation. Since the cabins were full we gladly invited them to stay at our house. A little background is in order. Lars first came to AK when he was twelve years old and for several years he helped Jane and I with our business. He was here for at least two cycles of the Gary Blinn years. As a twelve year old we all called him Little Lars or Sally (at least Gary did). Well, as you can see in the photo above, the guy on the right side of Gary and Chuck in no Little Lars. This photos was taken after an evening trip (it was one of the few times I was able to fish Lars). 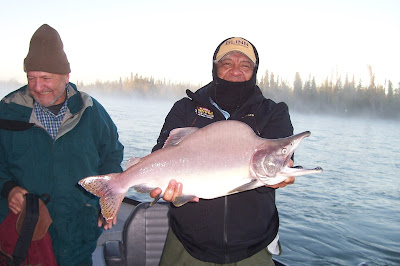 I had a tough task this week and it was to get Jo Ray a silver salmon. Wouldn't you know, his first bite of the morning was this huge Wilbur. Was this going to be his fate? 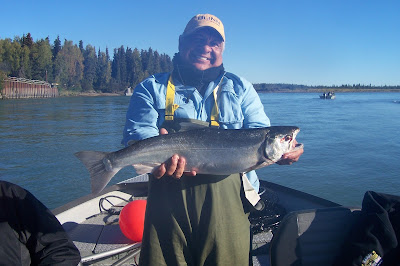 I started to stress as the morning wore on because Jo Ray hadn't caught a silver. About an hour before our day ended the curse was broken. Mission complete. 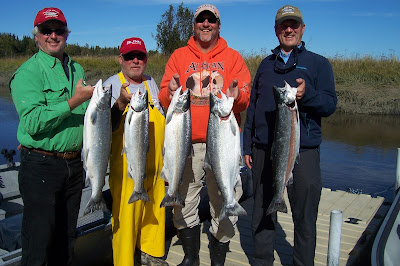 This was the final photo of Blinn week number three. Clint, Steve, Chuck, and Rick....thanks for ending things the way you did. 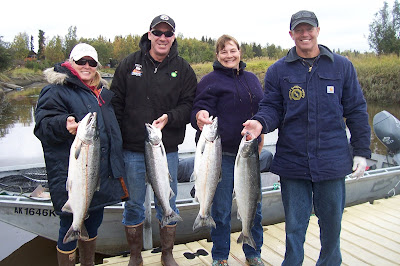 Saturday was the first day in three weeks that I didn't fish a group associated with Gary Blinn. On this day I got to take out my college buddy Tony, his wife Peggy, and Tony's brother Troy, and his wife Billie. The silver action was on the slow side, but everyone managed to catch one. 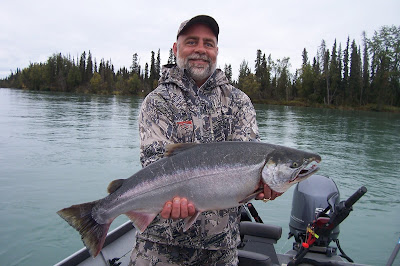 Sunday the fishing was slow as well but Craig caught this nice 14lber. 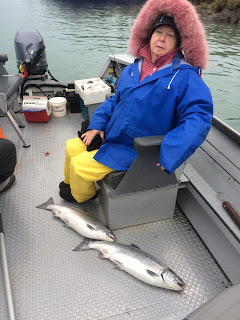 She's baaaack! In a five minute span Sunday morning, the pink parka wonder, Judy Kingsbury, caught these two silver salmon. Unfortunately, the bite ended as fast as it began, and that is why I don't have anymore photos for the day. Judy, and her husband Bob, are scheduled to fish with me three more times this week. I'm very confident that I'll have a few fish photos of Bob, so come back next week to see what he looks like. See you then!