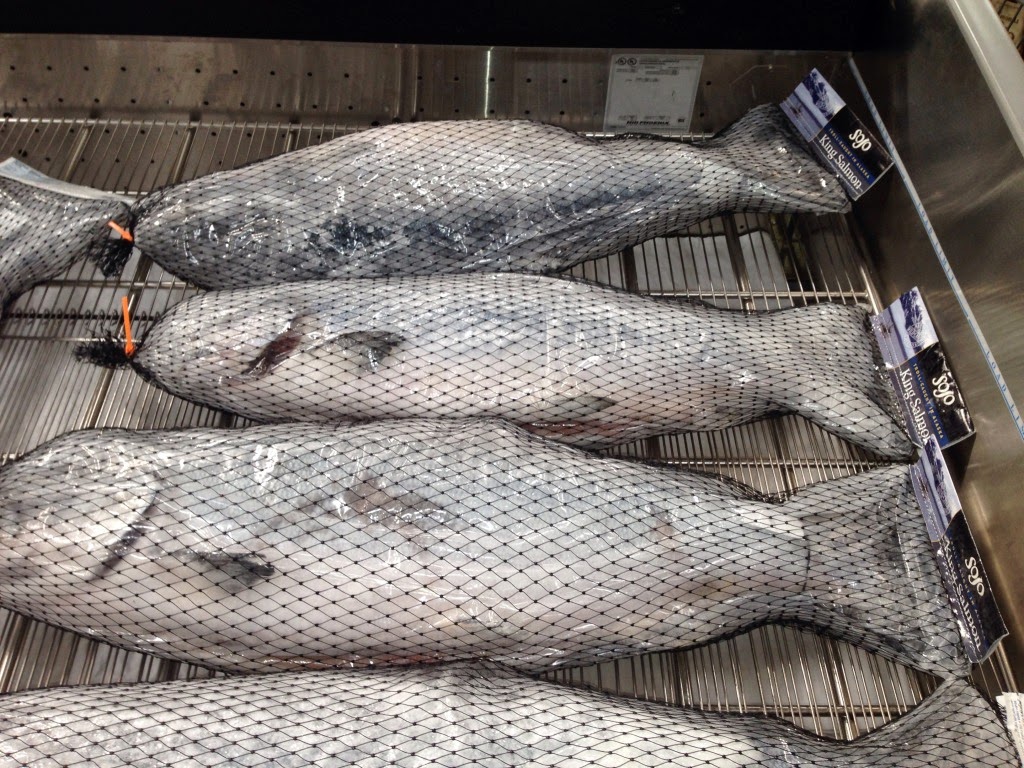 I've told many people that it's cheaper to buy fish at a market than it is to hire a guide.   However, after seeing these fish at a Costco, I may have to back pedal and say you'll come out way ahead if you catch a fish on a guided trip. 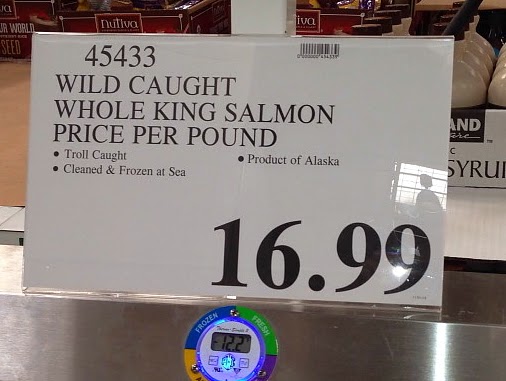 There is one truth about buying a fish at a market and that is you'll always be guaranteed a fish.   The only guarantee I give is the opportunity to catch a fish and I will do this to the best of my ability (no self respected fishing guide should ever guarantee fish).  That promise "you can take to the bank", as my buddy John would say.


Posted by Beaver Creek Cabins & Guide Service at 10:20 AM 2 comments:

One Month Until Mosquito Season


I was driving down the road this week and saw a church sign that said, "One Month Until Mosquito Season.  Lord have Mercy." Exactly......Lord have Mercy. 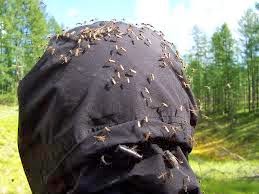 Last year was perhaps the worst mosquito year I can remember.  They came early and they stayed way too long. (kind of like a few friends I know).   The little vampires were so bad that it was the first time I ever wore a head net to protect myself.  Simply awful. 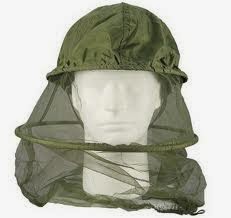 Trustworthy Hardware in Soldotna, the best little store in the world, has been selling "Bug Zappers" for years.   I always thought they were gimmicky and never paid much attention to them.   Because the mosquitoes were so bad I decided to pick one up, afterall they are inexpensive and cost a little bit more than a Kwikfish.   Guess what? They worked and they're a lot of fun.

After swatting a few hundred mosquitoes I  realized I should put one in all the cabins for our guests. What's not to like about effectiveness and entertainment all rolled into one.  I went back to Trustworthy Hardware to buy more of them but when I arrived they were sold out. Are you kidding me?   Did I mention how bad the mosquitoes were last year?  Anyway, I spoke to the owner and he said they sold 1800 zappers yesterday, 2000 today, and they were suppose to get a new shipment in the next day.   I made sure to get to the store early just in case there was another run on them.  The photo below is Dan Meyer, and his grandson Jacob, showing off these killing machines. 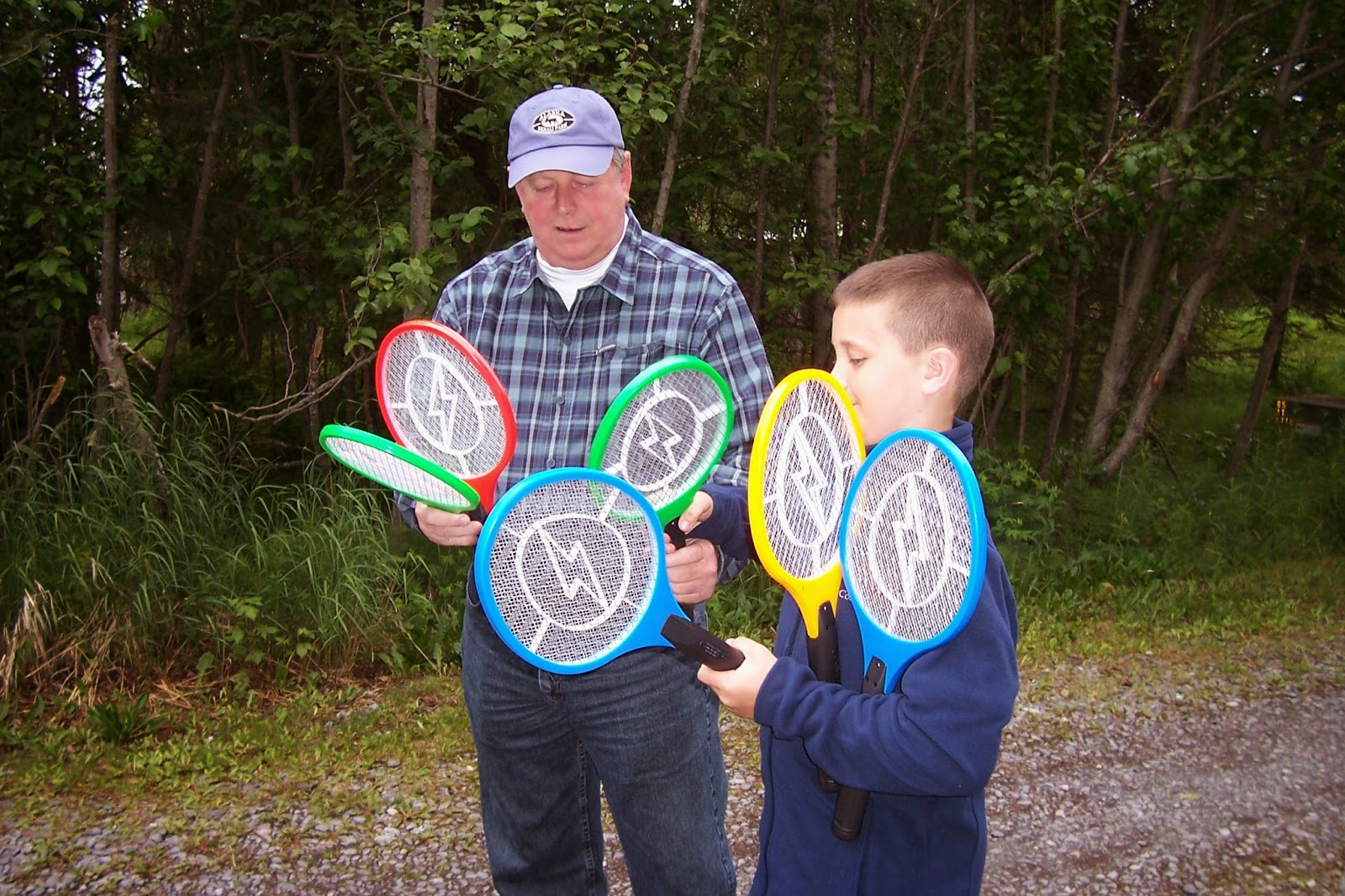 I hope last year was one of those "100 Year" events.  If not,  I'll be well armed with bug spray, bug zappers, and head nets. 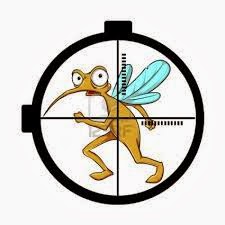 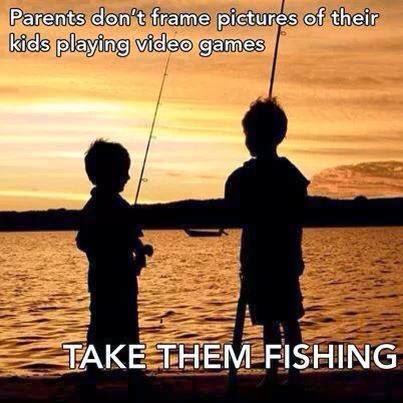 How true is that? 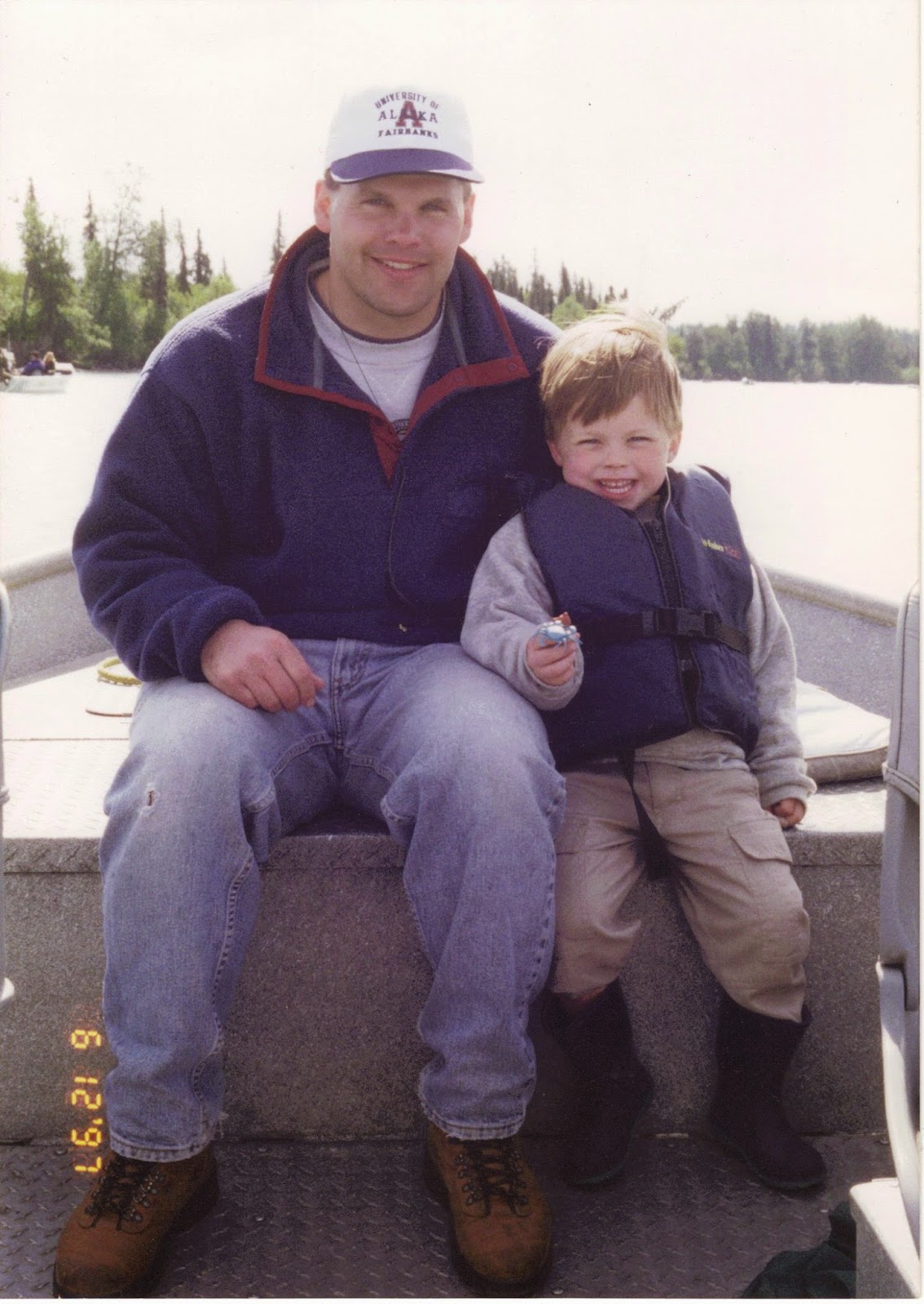 My dad always found the time to take me out fishing and I'll never forget that.   As a father I have the same philosophy and have many, many photos of my son Mac and I fishing (zero photos of him playing Xbox).   He's now 21 and this is a favorite photo of mine taken when he was little.  For those of you who are photo detectives you are correct if you say this picture was taken in the Toilet Hole.

Mac is busy young man nowadays with varied interests so we don't fish together often.  Once he finishes college and settles into a career I expect we'll resume our fishing trips together.

I'm pretty lucky that I get to bring a lot of families out fishing every year.   I'm always excited when Jane tells me that for my next trip I need to bring a couple of youth life jackets along.   What's not to like about the Palmquists'?

Besides taking out guests at our cabins I also volunteer a couple of days a year for local Take A Kid fishing events.  Always fun to spend time with like minded people!

So, if you haven't taken a kid out fishing it's never too late to do so. After all, parents don't frame pictures of their kids playing video games. 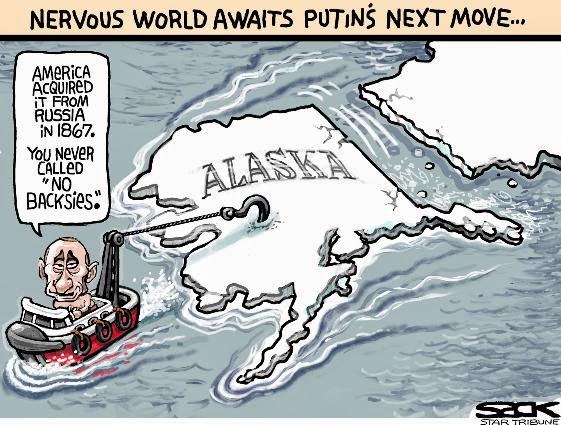 I came across this political cartoon the other day.

I've been concerned about current world affairs but I never thought about this until now.   Could this this be the next land grab by Russia?


Posted by Beaver Creek Cabins & Guide Service at 8:29 AM No comments: 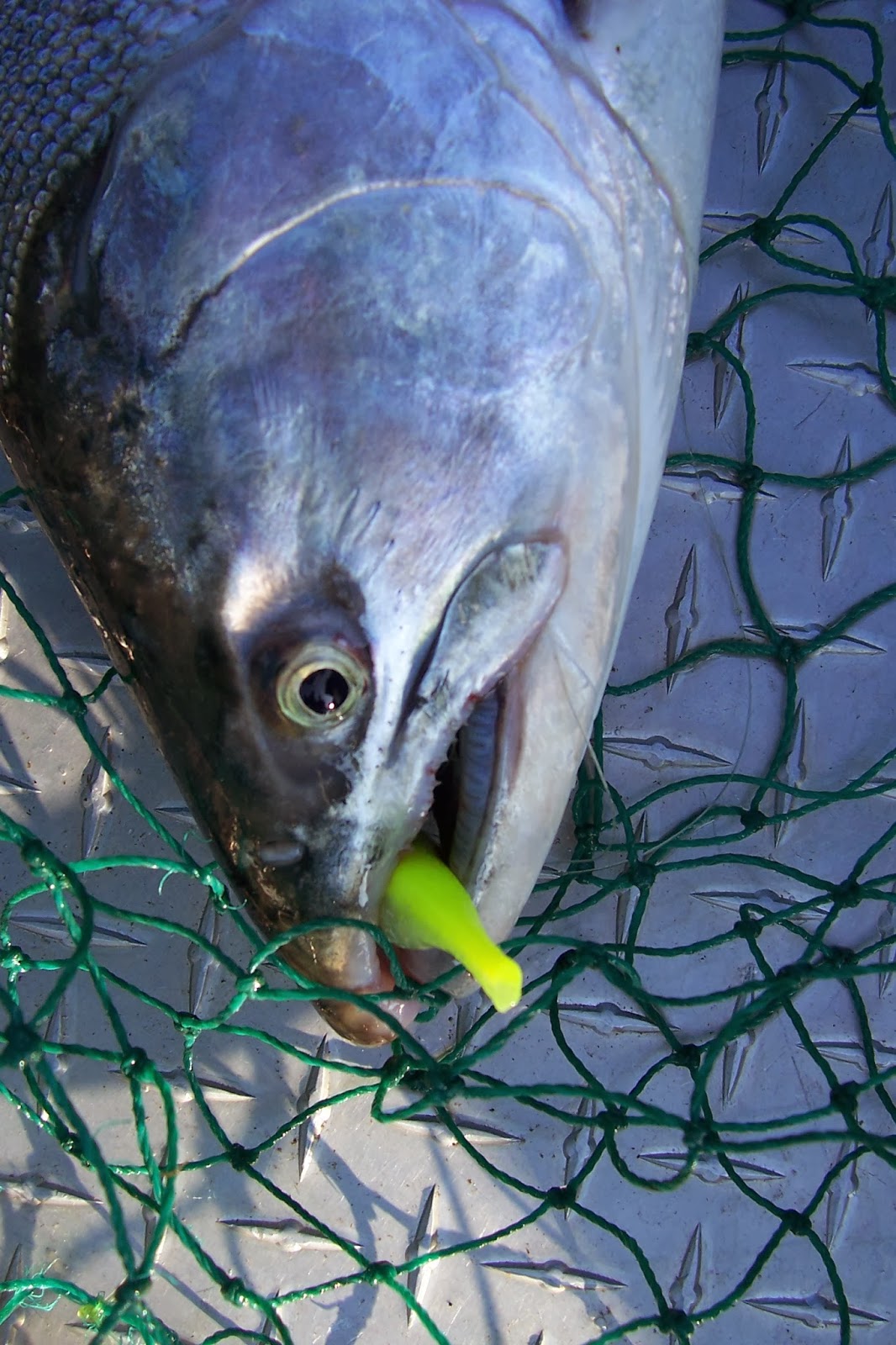 The Alaska Department of Fish and Game (ADFG) has issued an emergency order for the Kenai River effective immediately.   According to acting ADFG supervisor Lirpa Sloof, "before a salmon can be retained the fisherman must "Mirandize" the fish first.  If this is not done the angler has no rights to the fish."

The Miranda warning is as follows:


Sloof said, "we all know that salmon have rights and it was time that we spelled them out for them."   This is a landmark decision in man's quest for fish but it should also be noted that the fish may voluntarily waive their Miranda rights.   The waiver must occur somewhere between the netting and the subsequent clubbing of the salmon.

Posted by Beaver Creek Cabins & Guide Service at 4:44 AM 3 comments: