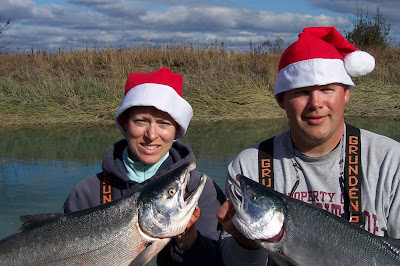 Bald Eagles on the Kenai Peninsula 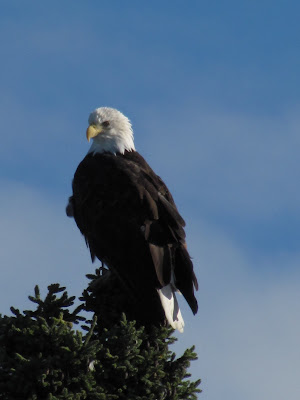 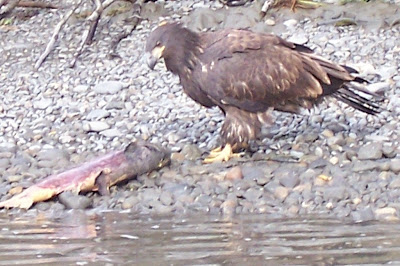 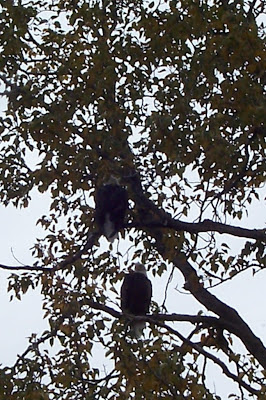 If you are a fan of bald eagles the Kenai Peninsula is the place for you. From the rivers, ocean bluffs, and lakes the chances of seeing one is 100%. This was not always the case.

In the early 20th century bald eagle populations were declining and the main cause for this was man. From habitat destruction, hunting, and the use of pesticides numbers dwindled across North America. In Alaska, it was estimated that over 100,000 bald eagles were killed from 1917-1953. The main reason was because they were seen as a threat to the salmon populations. Through time public awareness increased about the decline of our nation's symbol and finally in 1967 the bald eagle became protected and was officially listed as an endangered species. This protection has allowed the bald eagle to thrive and in 1995 the status was changed from "endangered" to "threatened" and by 2007 completely removed from the list. Today the worldwide population is estimated at 110,000-115,000 with over half living in Alaska. The comeback of the bald eagle is truly an amazing success story.

Posted by Beaver Creek Cabins & Guide Service at 7:10 AM No comments: 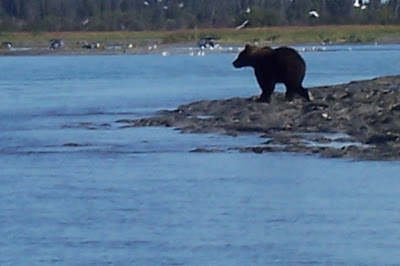 Okay, last post I told you I was going to tell a couple of old bear jokes. Raise your right hand if you've already heard these......Here goes.

The Park Ranger at Denali park is advising hikers to be alert for bears and to take extra precautions to avoid an encounter. Park visitors are advised to wear little bells on their clothes to make noise when hiking. The bell noise allows the bears to hear the hiker coming from a distance and not be startled by a hiker accidently sneaking up on them. This might cause a bear to charge. Hikers should also carry pepper spray in case they encounter a bear. Spraying the pepper in the air will irritate a bear's sensitive nose and it will run away. It also a good idea to keep an eye out for fresh bear scat so you'll know if there are bears in the area. People should be able to tell the difference between black bear scat and grizzly/brown bear scat. Black bear scat is smaller and will be fibrous, with berry seeds and sometimes grass in it. Grizzly/brown bear scat will have bells in it and smell like pepper......

Bear joke number two. Honest, the first time I heard this Ronald Reagan told it (I wonder how old it was when he first heard it).

Two campers were hiking in the woods and they stumbled upon a brown bear. One camper reached into his backpack and quickly pulled out a pair of tennis shoes. "What are you doing" said the one camper, "you can't outrun that bear." The other camper replied, "I don't have to outrun the bear, I just have to outrun you!"

A few years ago I used this "tennis shoe" joke with a group of seven guys (all related). I was outfitting them with hip boots to fish the Russian River and when I got to the youngest guy in the group I told him he had to wear his tennis shoes. He said, "I thought we were wading in the water? Won't I get wet?" I told him he would but also told him there are lots of bears near the Russian River. I told him he didn't have to outrun the bear he just had to outrun his brother. We all had a good laugh with that one.
Posted by Beaver Creek Cabins & Guide Service at 7:33 PM 6 comments: