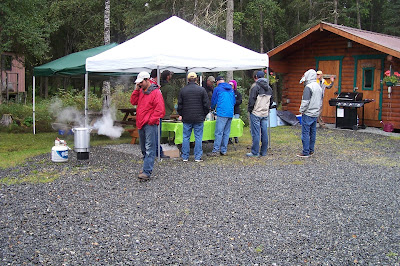 It's not all about the fishing during the three weeks of Blinn. One of the non fishing highlights is when Gary puts together "Seafood Night." Gary will grill salmon, make a pot of smoked salmon chowder, and cook up to 20-40 pounds of king crab. The evening is topped off with Gary's homemade dump cake and vanilla ice cream. Definitely not a night to be counting calories. 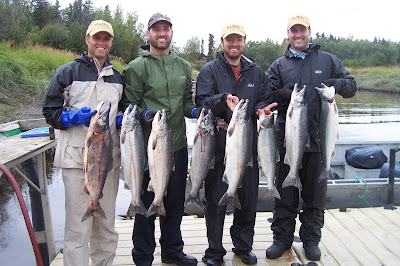 On to the weekly fishing report...
Sunday was the first day of Blinn week number two. The river was kind to these guys. From left to right is Jeff, Eric, John, and Jason 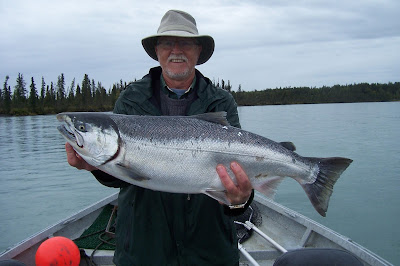 On Monday, Gary joined Jane and I for a couple of hours in the afternoon. Jane caught a silver and so did Gary (none for me). Here's Gary holding one of the largest silvers caught this week. 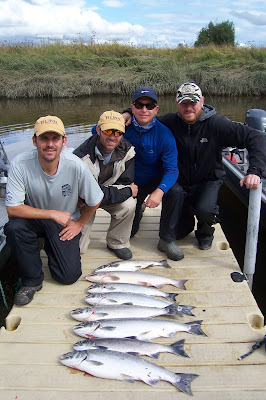 Tuesday the fishing was spotty for silvers but we managed to get these. From left to right are Jimmy, Jack, Adam, and Ernie. 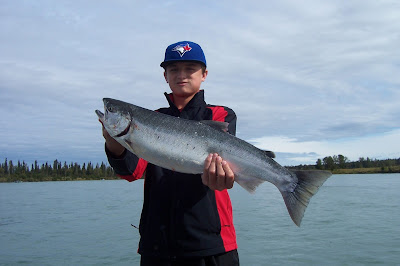 Wednesday was the toughest day for my boat. We lost a few but only managed to catch a couple of silvers. Here's Logan with the only photo taken. I felt awful about our lack of silver production so we ended the day casting for pinks. It's always nice to have that option when the silvers aren't cooperating. 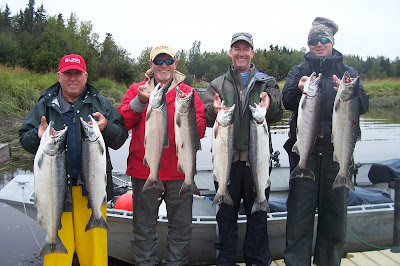 Thursday we got our mojo back and there were plenty of silvers for all. Here's Steve, Wally, Jason, and Caleb. Steve Morris is on the left. He's one of the old guard who came to Alaska a few days before Blinn week number three officially begins. It should be noted that Steve has achieved the Kenai grand slam. He has already caught a pink, a silver, a red, and a king salmon. Not many can make this claim and he still has a week of fishing to go. 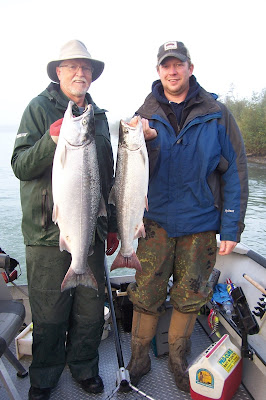 Friday was a very short day on the water for me. Not because we got an early limit, but because everyone staying at the cabins had to fly out that afternoon or evening. Gary started out the morning with a silver. About an hour later he hooks another one and as he was reeling in Joey said he had one too. A double! What a great way to end Blinn week number two.
Tomorrow is the start of Blinn week number three. This is the week I've been looking forward to all year. This is because these are the guys who've been coming to the Kenai with Gary the longest. It doesn't matter if the fishing is good, bad, indifferent, we're all going to have a great time on and off the water.
See you next week. 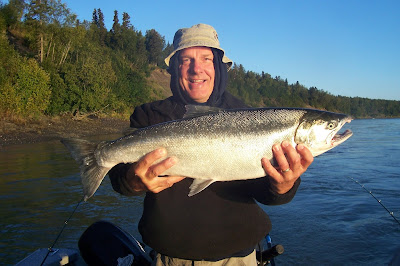 I'm changing up my fishing report. I usually post on Sunday's but since the Gary Blinn group is here for three weeks it works better if I do it on a Saturday.  How did the week go?  Well, the river, the saltwater fishing, and fly out trips have been a bit difficult for silver salmon. On the river, we've had up to five boats fishing and only a few times have boats been able to limit out. Individuals have been catching their limit, but on most days the boat hasn't filled out. Oh well, at least we have pink salmon as an alternative when the bite is slow for silver salmon.

Tracy is pictured above with a silver that hit before we could get all of our lines in.  He got his second one fifteen minutes later. It would have been nice if the rest of the day was like that but we only managed to get two more. We ended the day catching pinks and said "uncle" when our arms got tired. 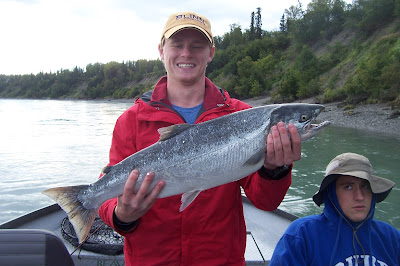 Brandon has the award for the most exciting fight of the week.  At one point this fish ran at least five feet out of the water and up on the gravel bank before it found our net. This is what makes a silver salmon a silver salmon. 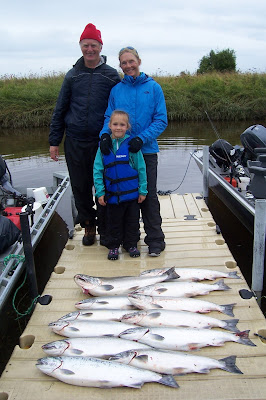 Here's Volker, his daughter Kirsten, and granddaughter Bella proudly posing with the days catch (truth test: not all of these fish were from our boat). 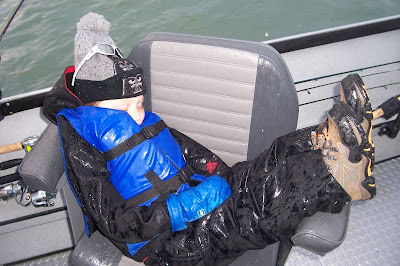 How could you not like this trooper? Five year old Sebastien fished the river three days, the saltwater one day, and also did a fly in trip. Here he is catching a nap in the rain before the silver bite started to happen. 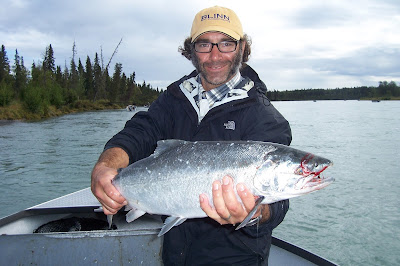 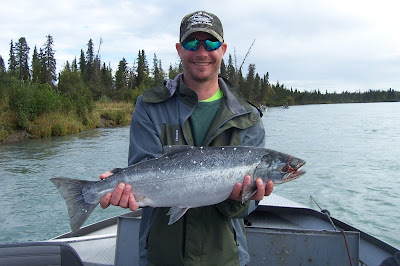 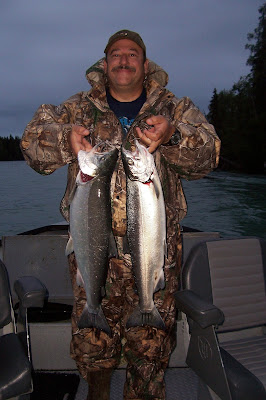 Terry caught this quick limit before seven o'clock. It's hard to put your fishing rod away for the day, but when you retain two silver salmon on the Kenai River in August, you have have to stop fishing. Terry said he could think of worse things to do then sit on a boat on such a gorgeous river. 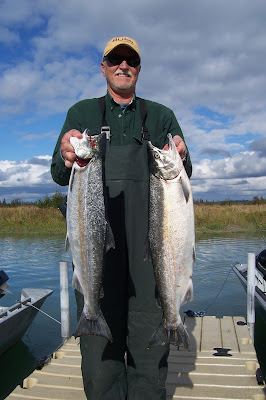 Tomorrow is the start of Blinn Week #2. I'm hoping the run of silver salmon is just late and not indicative of a weak run. If we're not catching all of our silver salmon you know we'll be out catching a bunch of pink salmon. What a great Plan B. 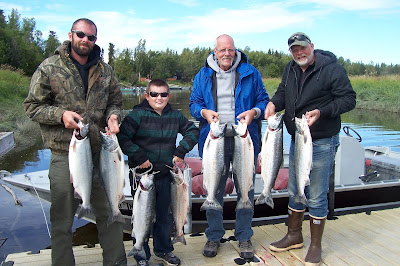 This past week the pink salmon fishing has been hot and the silver salmon fishing is picking up. Yeah!
Pictured above is Travis, his son Trenton, John, father and grandfather of the two, and Eric, my neighbor. Not a bad way to start off the week. 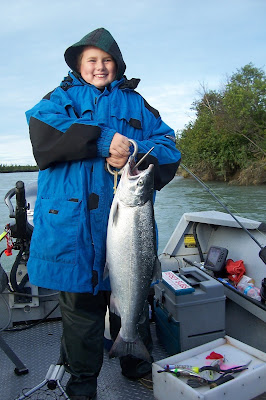 The next two days I fished John, Travis, and Trenton again. We caught a ton of pinks over the two days, but only managed to land 4 silvers. Thanks for coming back a second time this season John, and I look forward to our days together in 2017. 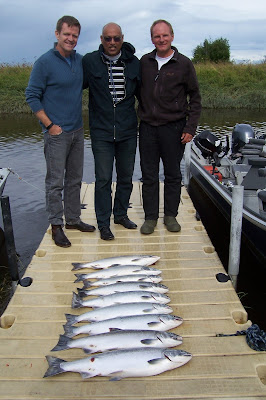 On Saturday I had a late morning trip with John, Sham, and Gary. The afternoon tide had the right amount of silvers and we were able to limit out in a couple of hours. That was good because the boys were starting to run out of beer. 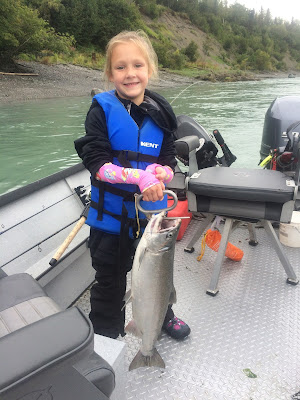 Sunday was the beginning of "Gary Blinn Week #1". We caught one silver early on this day and missed several before we switched over to casting for pinks. After getting worn out reeling in a bunch of pinks, we switched over to the more sedentary technique of sitting on anchor and focused our efforts on catching silver salmon. It paid off. It didn't take six year old Bella long to catch this silver. 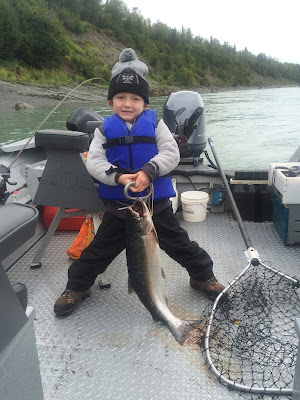 And her 5 year old brother, Sebastien, wasn't going to let his sister out do him. 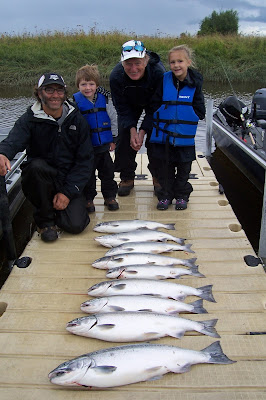 In all, we brought 5 silvers to the boat (and kept a couple of bright pinks).  Great job Grandpa Voulker, son-in-law Jeff, granddaughter Bella, and grandson Sebastien. You're attitudes were infectious.
For the week ahead, I'll be fishing more of the "Gary Blinn Week #1" crew.  If the silver fishing isn't consistent you know we'll be chucking spinners and spoons to catch those pinks.
See you next week. 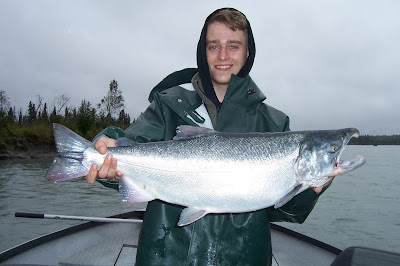 The pink salmon fishing has been hot. Silver fishing....not so much.

Alec Laflamme, pictured above, has caught a lot of fish with me over the years. In fact, as a fourteen year old he caught the largest king salmon ever in my boat. However, this past July he was on a king trip with me during the peak of the run and everybody in the boat caught a king that day but Alec. A week after the king season closed his dad, grandma, and grandpa were booked for a couple of days of fishing and Alec decided to join up with them. After catching multiple pinks and this silver, he proudly announced, "the streak is over!"  I'm glad it is too. 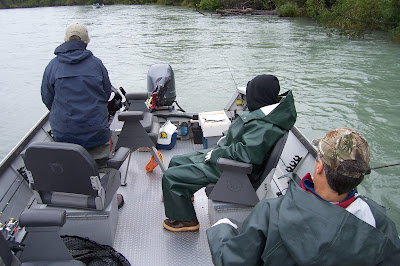 There's grandma Janet on the left fighting a pink while Alec, and his dad, Todd look on. 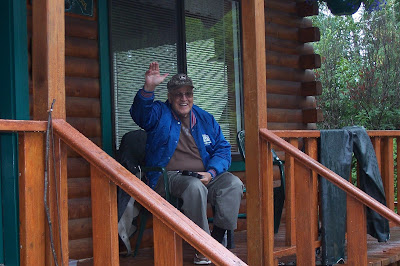 Grandpa Dean-O was wore out from reeling in pinks on Saturday so he decided to stay out of the rain and let us fish Sunday morning.  How could we not have good luck with a send off like that? Dean-O, Janet, thanks for the good times this summer (I hate to see it end) and I'll see you down the road. Safe travels to the both of you. 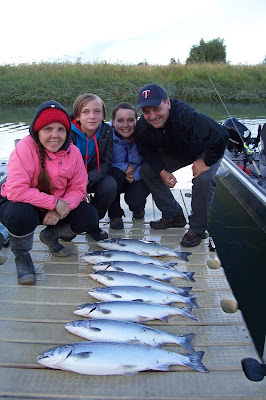 Here's a great family photo. From left to right is Patricia, Rains, Georgia, and John. We started fishing at noon and the first fish to the boat was a silver. I thought we would be on the silvers for the whole day, but that wasn't the case. We did, however, catch pink after pink after pink. They are beautiful this year. They're big, bright, and are putting up a tremendous fight. 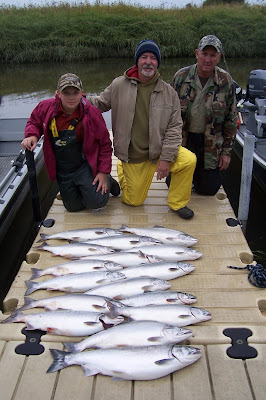 Here was another successful day on the water. From left to right is Mike, Bob, and Harold. Mike "The Fish Whisperer" is Harold's twelve year old grandson and Bob just happened to be in the area and gave us a call (not related to the other two). The first fish of the day was a silver and I thought, "here we go!" Well, that was the one and only silver of the trip. After catching nearly fifty pinks and one red salmon, it was time to call it a day.

The forecast: the week ahead will certainly see us catching plenty of pinks. I'm a little less certain about the silver salmon. We'll hit it hard and let you know how it goes.