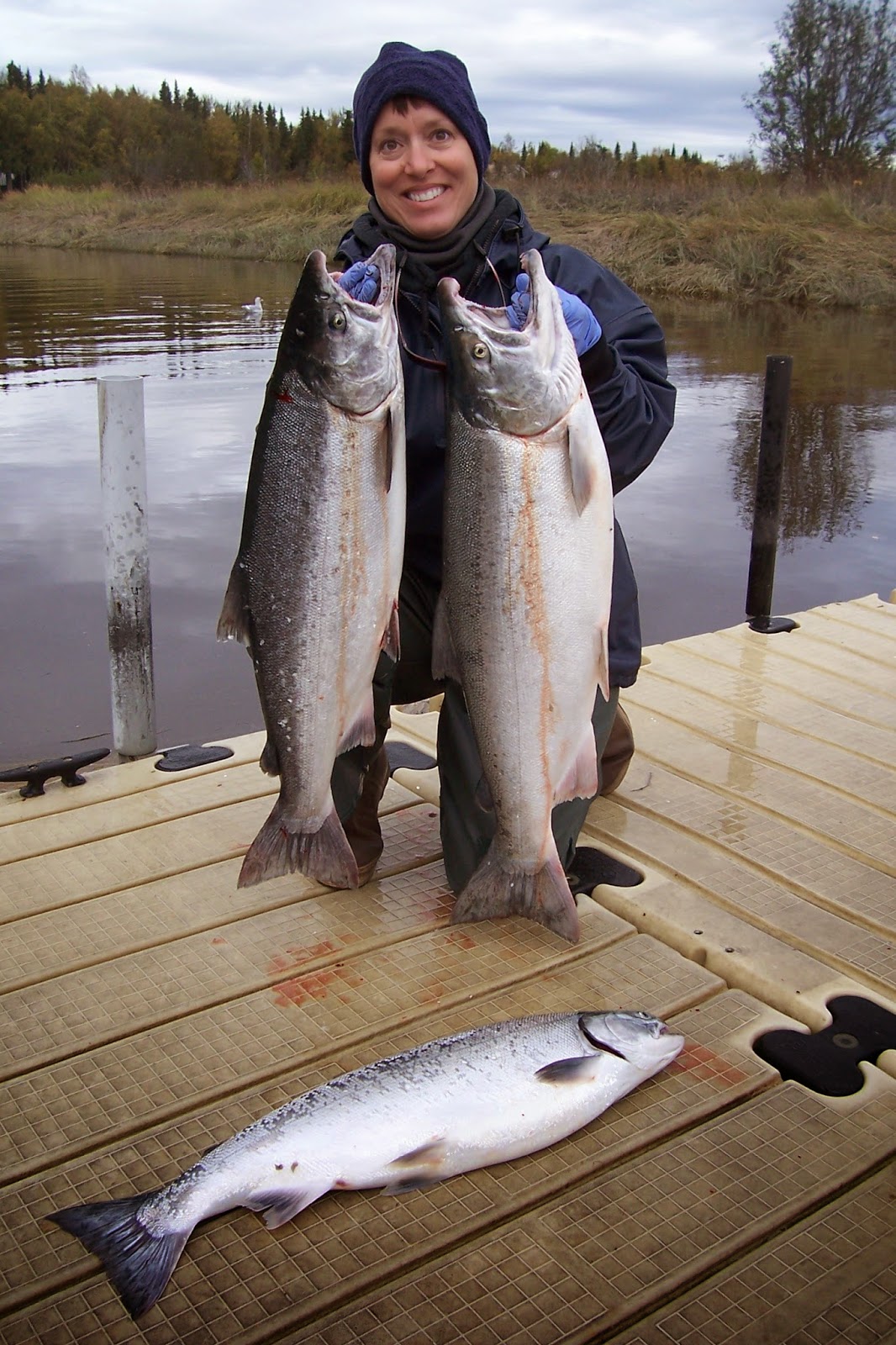 The silver fishing is still good on the Kenai River.   Here's Jane with her limit of silvers. 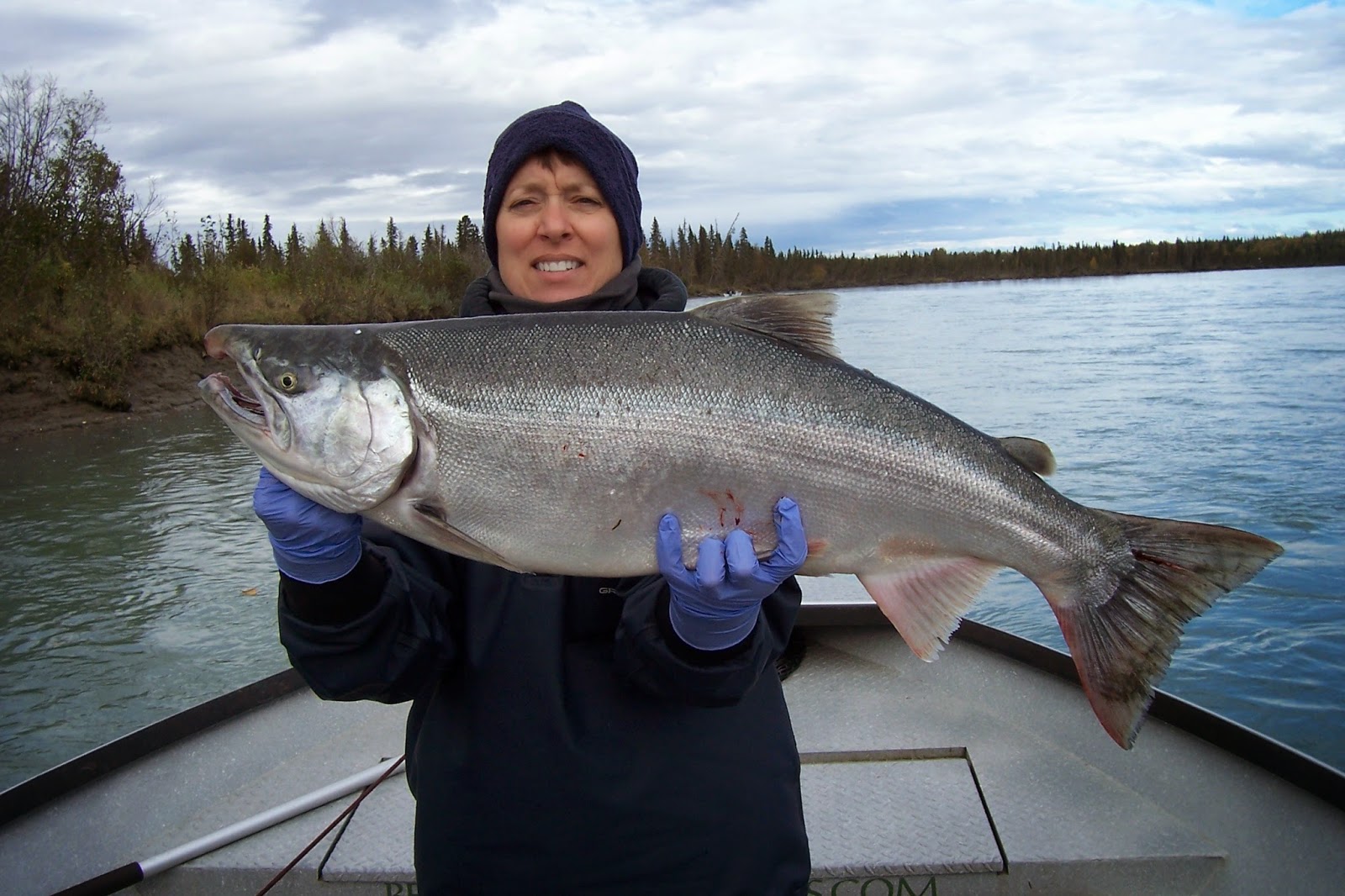 And here she is with the largest silver of the season, a 17lber. 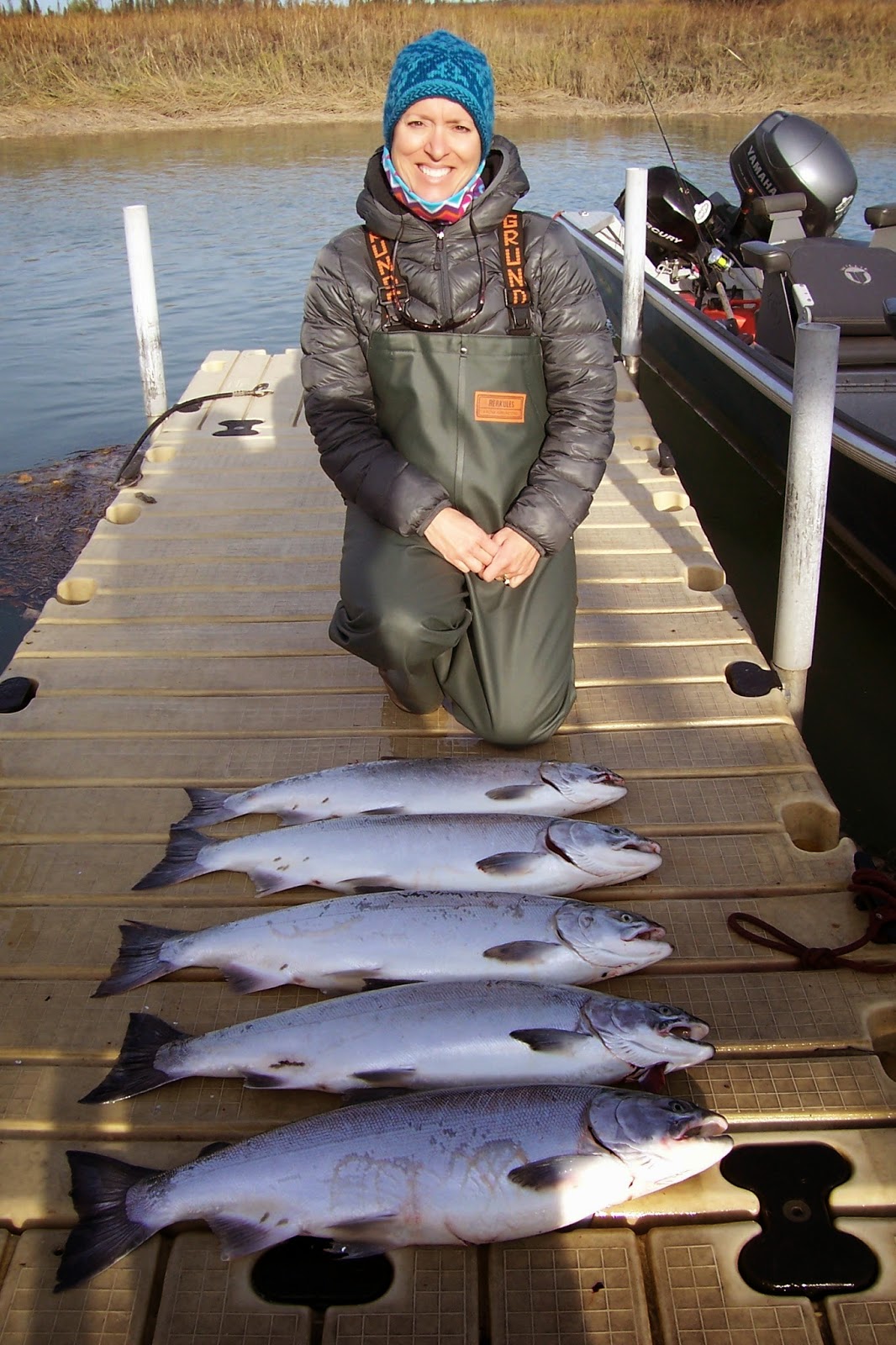 On this day Jane let me catch a couple of fish to go along with her limit. 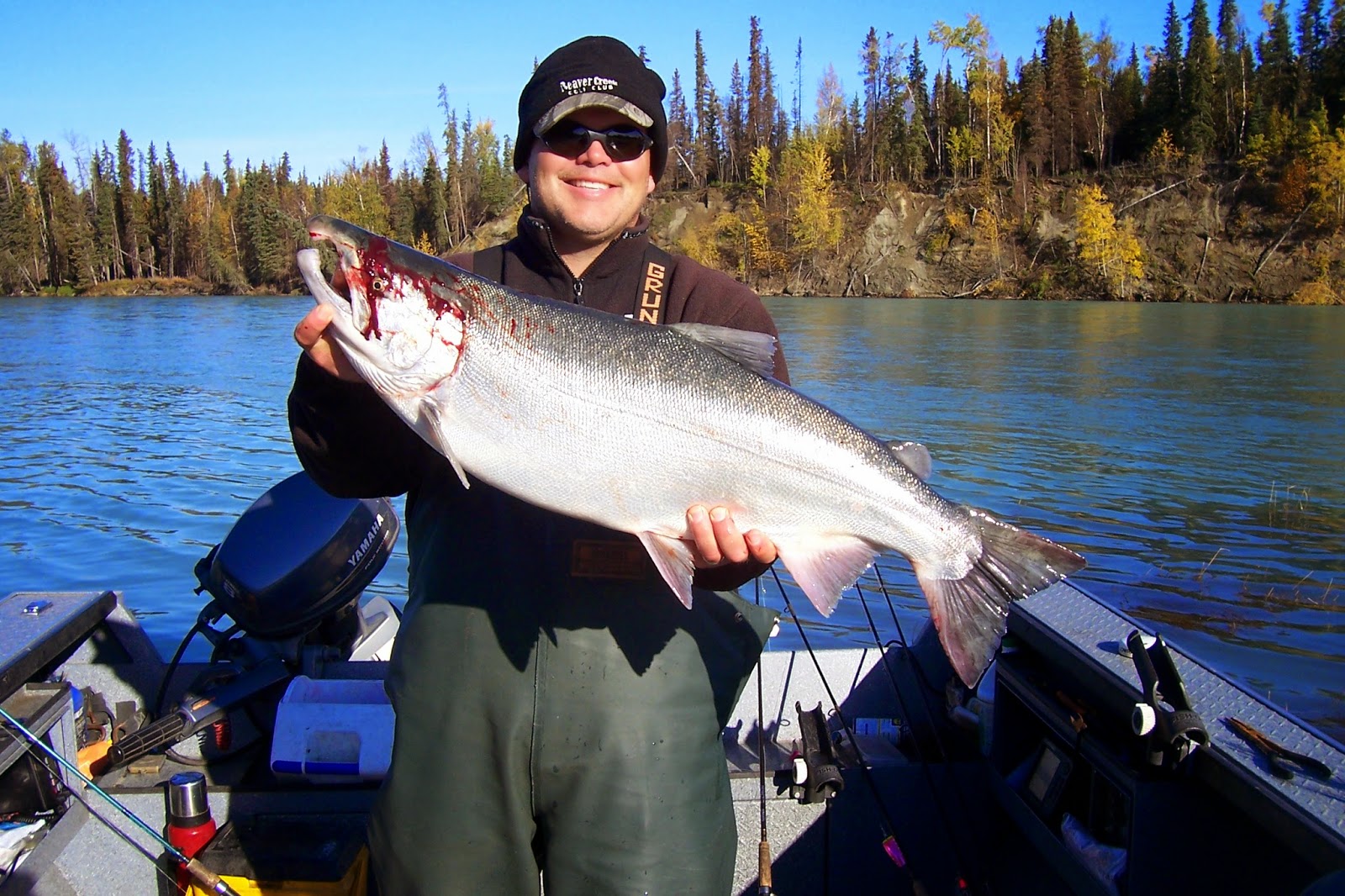 On Tuesday, my friend Boo called me and asked if I wanted to fish the middle river with him.  Glad I went along because the fishing was outstanding.  This is a rare photo of the guy who usually is the one taking the photos. 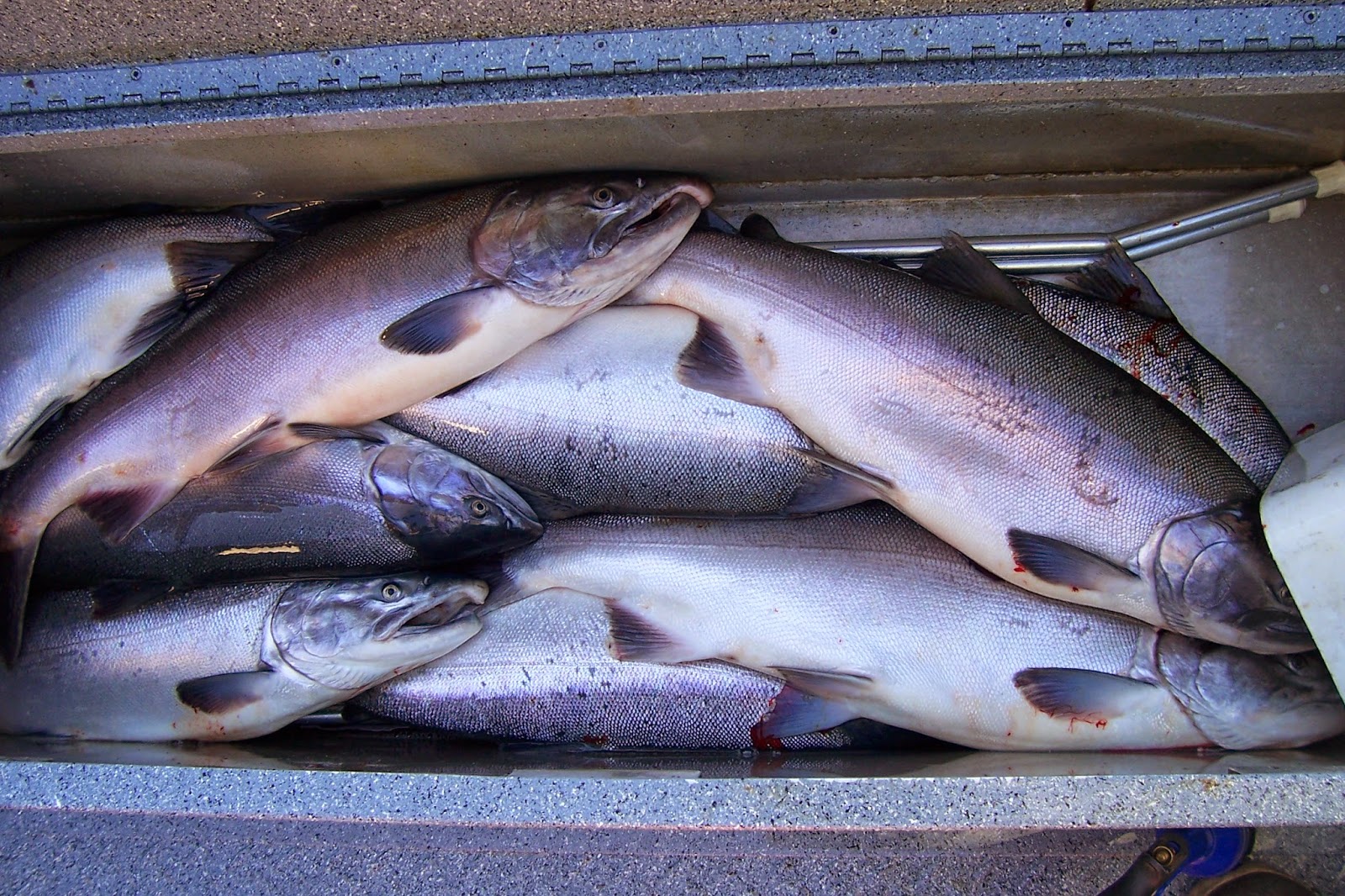 Here's a box full of middle river silver salmon all caught on jigs. 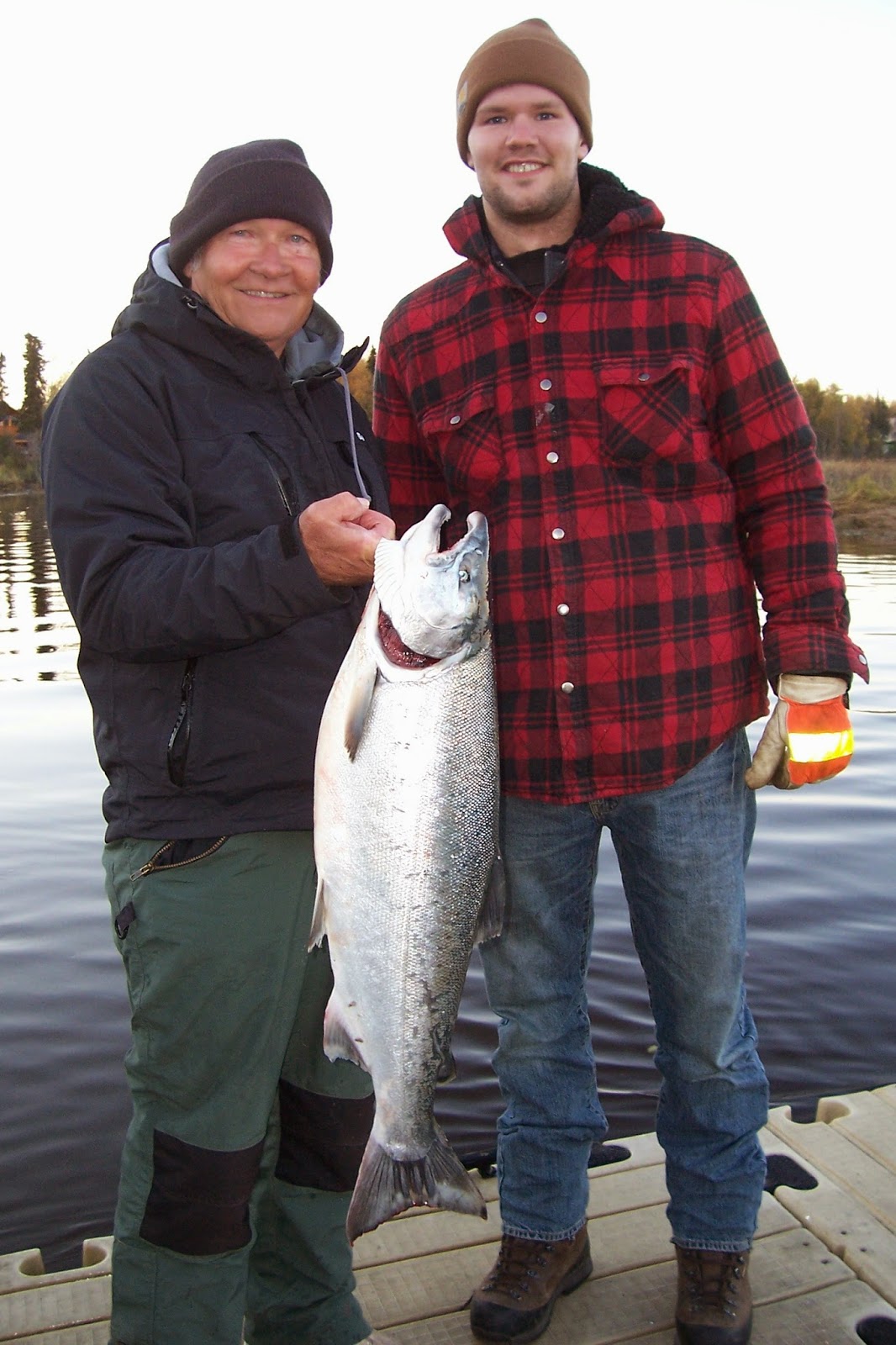 On Wednesday, Scott and Steve spent the day on the water with me. Great weather and conversation easily made up for the lack of biters.   Wish we could have found more fish but that's just the way it goes some times. 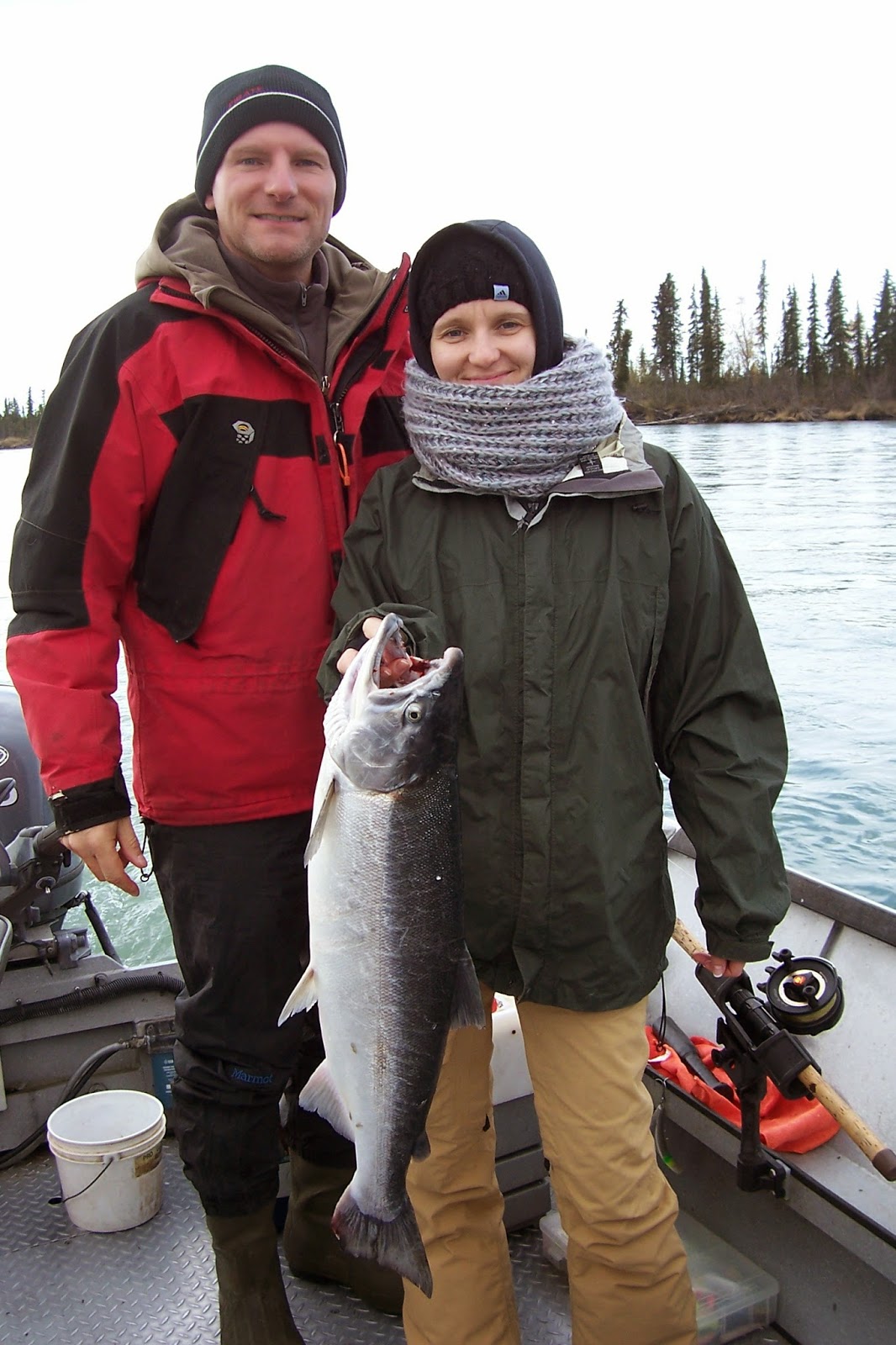 On Saturday, my good friends Gary and Nicky came down for an afternoon of fishing.   It wasn't red hot but we caught a few and lost a few.   No complaints. 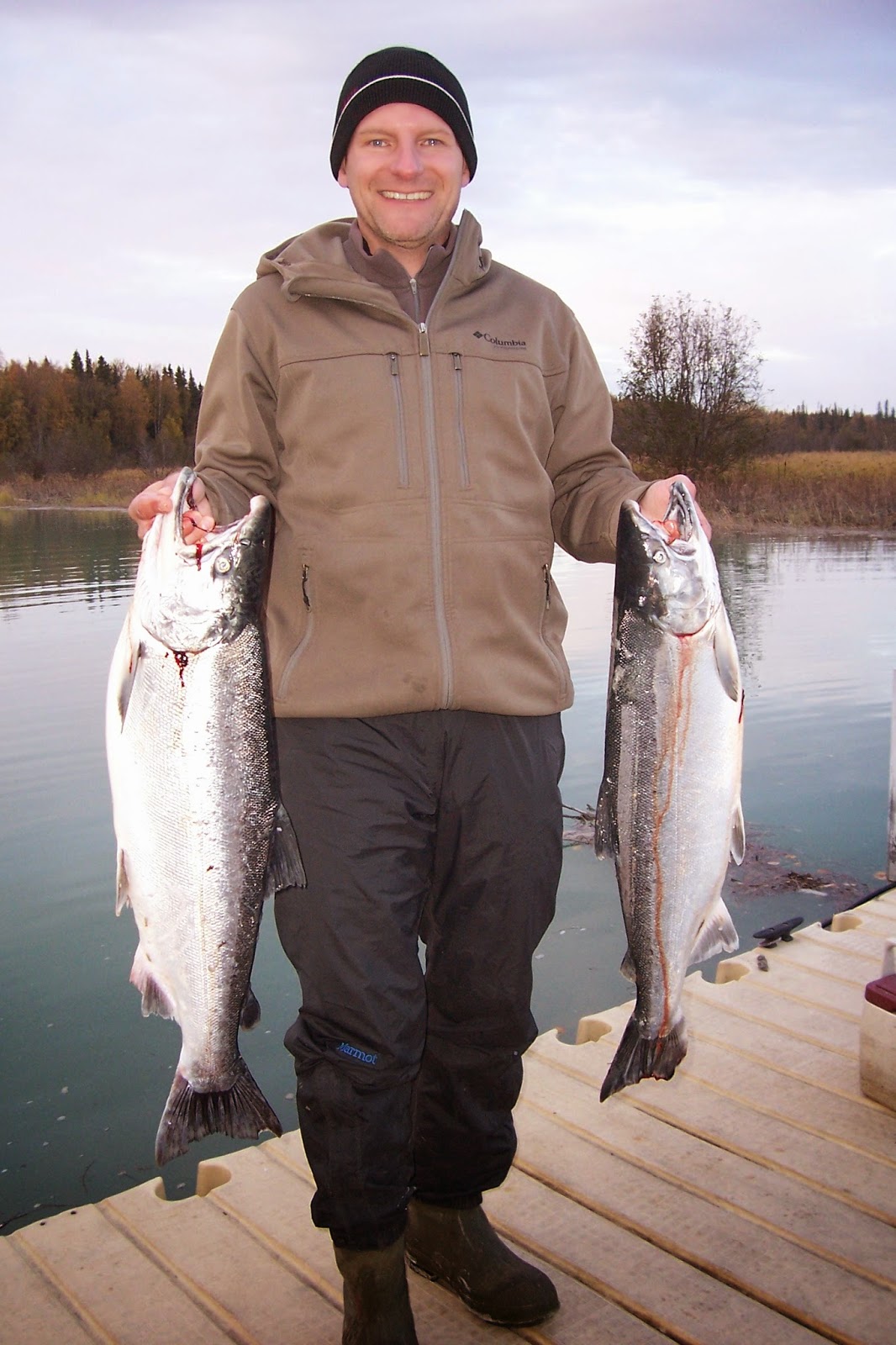 Unless my phone starts ringing, I am now officially done guiding. This does not mean I am done fishing.  I plan on fishing most of this week and well into October.  I'll keep you posted on what's going on out there....good, bad, indifferent.
Posted by Beaver Creek Cabins & Guide Service at 2:04 PM 2 comments: 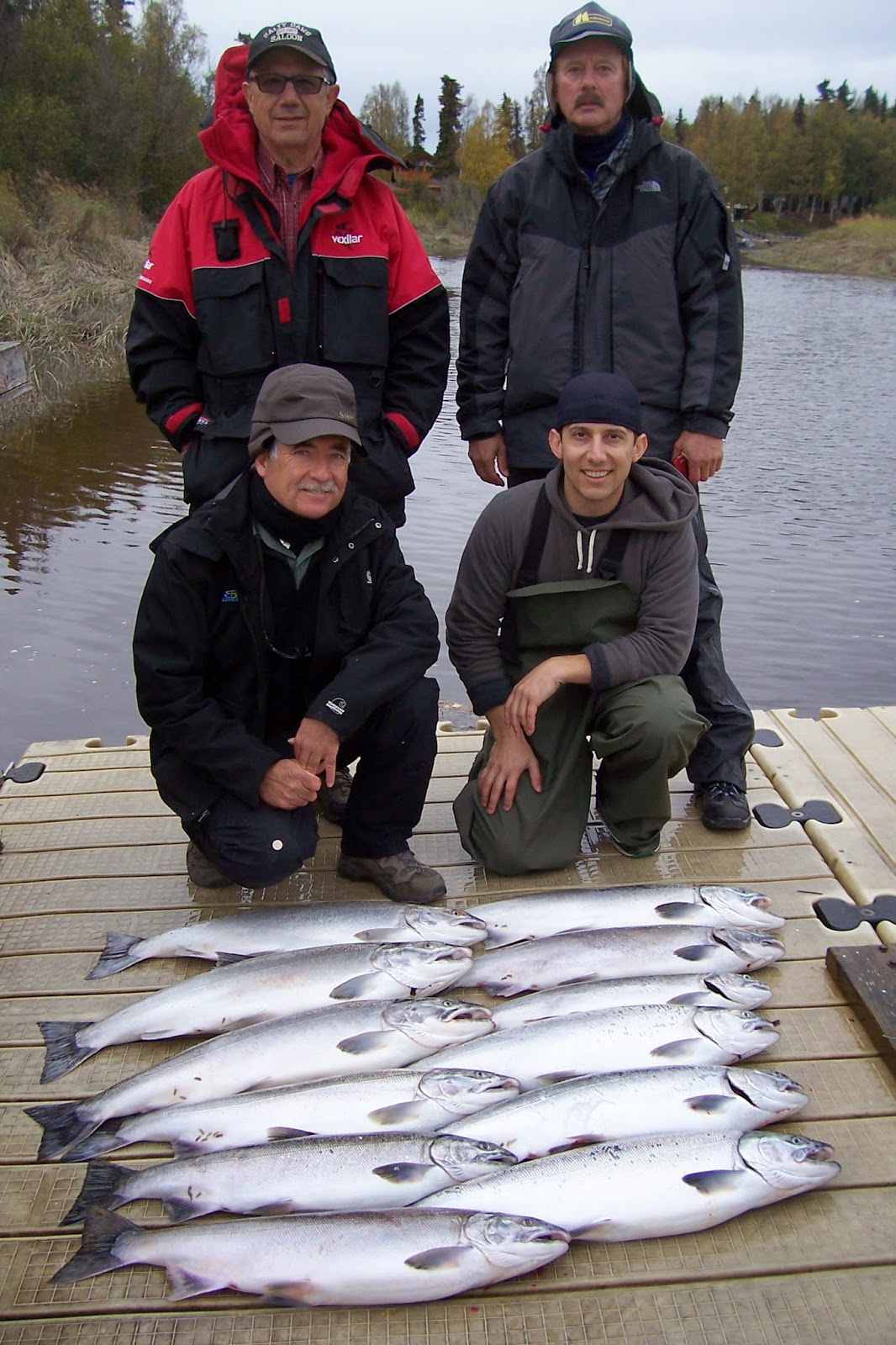 For most of the week the fishing was really good.   It wasn't until Saturday that the affects of heavy rains finally took a toll on the bite. I had my fingers crossed that the river would stay clear until then but unfortunately it did not.

Above is a photo of the last day that I fished Ron, Rafael, Joe, and Jeff.   A steady bite was a perfect way to end their stay at Beaver Creek Cabins.  It might have been an even better day if Jeff would have left the bananas at home.  Hey guys, I look forward to the next time we can all get together to swap stories and catch a few fish on the Kenai. 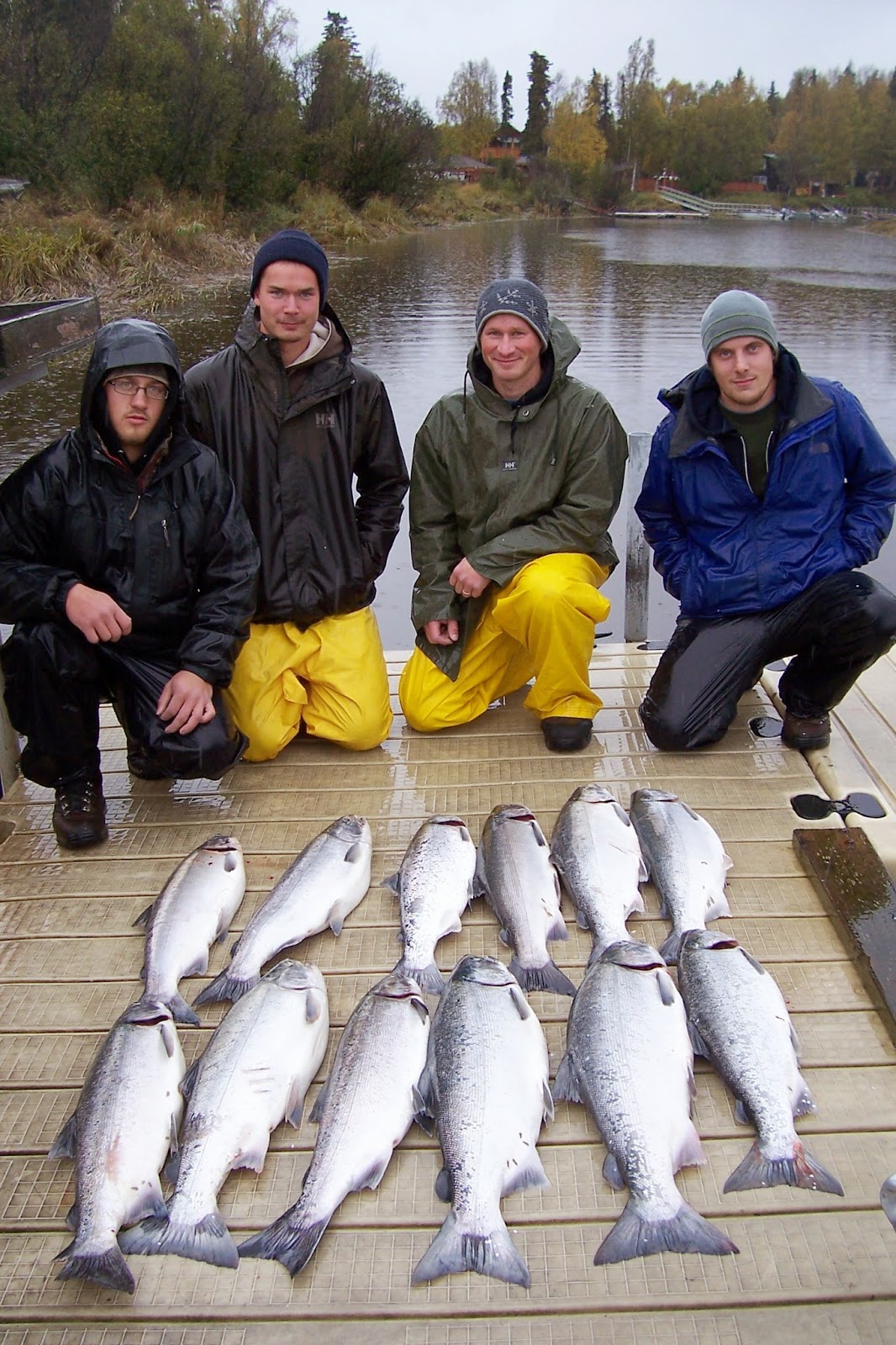 On Friday,  for Team ABC Seamless (Team 1), their timing was perfect.   Good water conditions and lots of fish moving through.   From left to right is Travis, Nick, Wally, and Sid.  At the end of the trip Wally told me he contemplated going moose hunting but decided he should go fishing.  He thought his chances for success would be better.   I guess we'll never know how the hunting would have been been but you can't do any better than this on the Kenai in September. 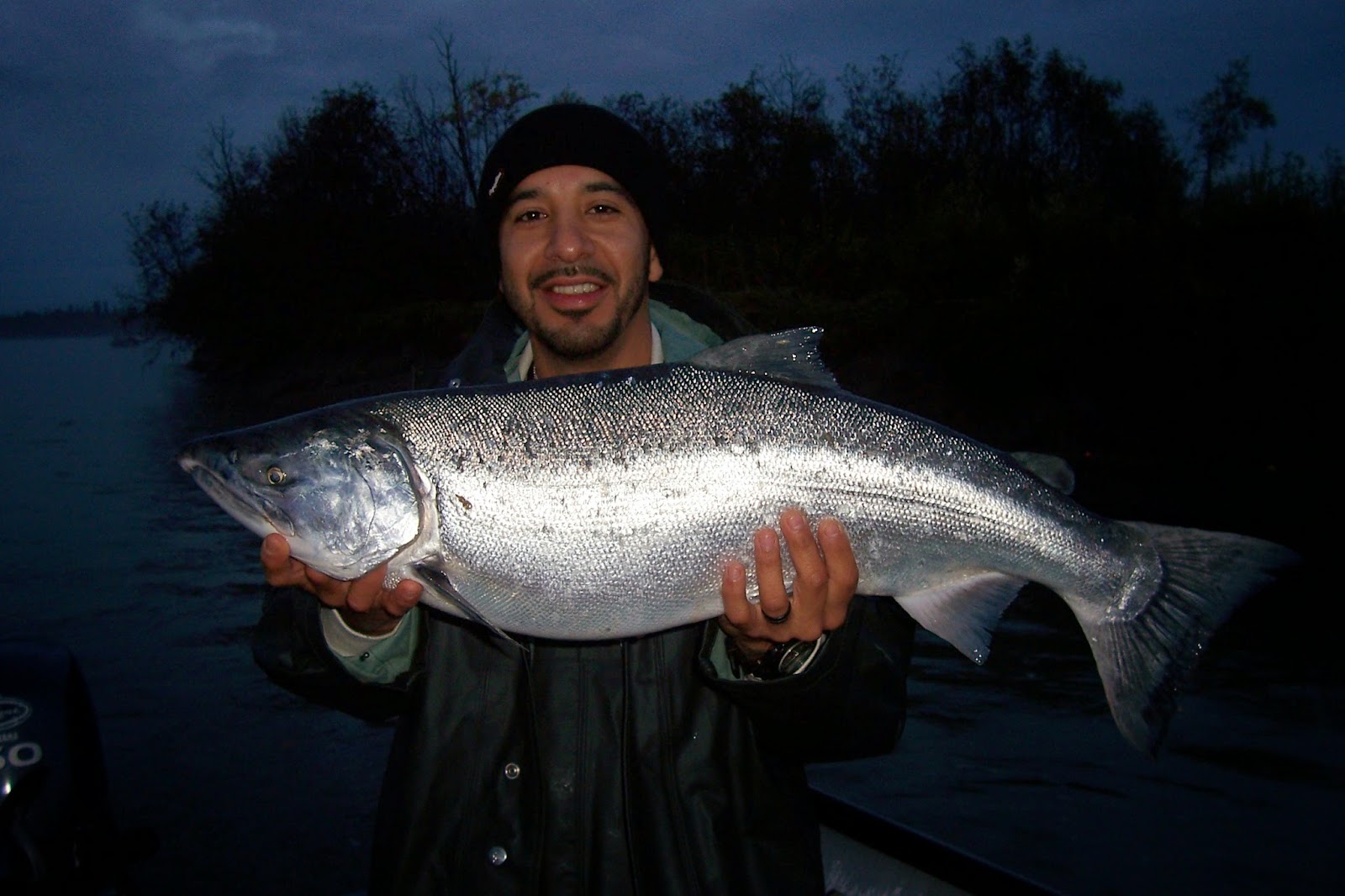 On the flip side, Team 2 of Team ABC Seamless (Robert and Clark), probably wished they were here on Friday rather than Saturday.   Initially, I didn't think any of us thought that way because Robert landed the silver in the photo above within the first five minutes of our day.  It should be noted that this fish completed a trifecta for Robert. This was his first, his biggest, and the most fish he has ever caught.  Anyway, as we settled into the day, and as it got lighter out, I could see that overnight the water color changed had from teal green to brown.   Rats.  Fishing was going to be tough.  Well, at least we enjoyed a day of nice weather and stories.   Thanks again Team ABC Seamless (Team 1 and 2) for doing your annual fall silver trip on the Kenai.

I am not scheduled for any trips until next weekend.   When the water conditions get better there's no doubt Jane and I will be spending time on the water trying to catch a few fish for our own freezer. See you next week.
Posted by Beaver Creek Cabins & Guide Service at 4:13 PM 2 comments: 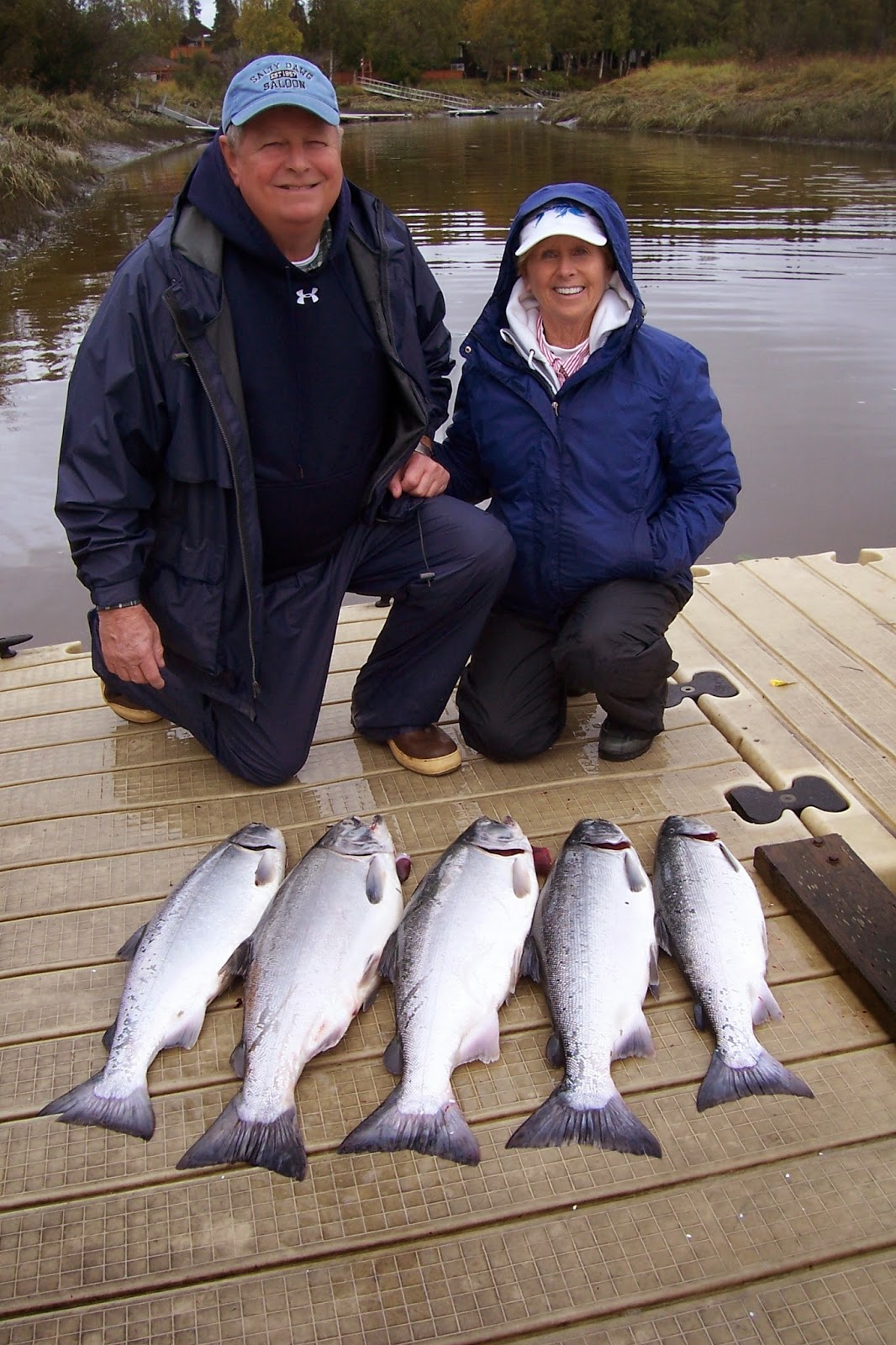 I think the peak of the second run of silver salmon came a week early.   Don't get me wrong, the catching was decent but the bite definitely was slower.   Well, for almost everyone it was slower, with the exception of Mary Meyer.   Mary pulled off a pure hat trick, catching her three fish limit in under 15 minutes.  All I can say is her Kit Kat mojo really paid off. 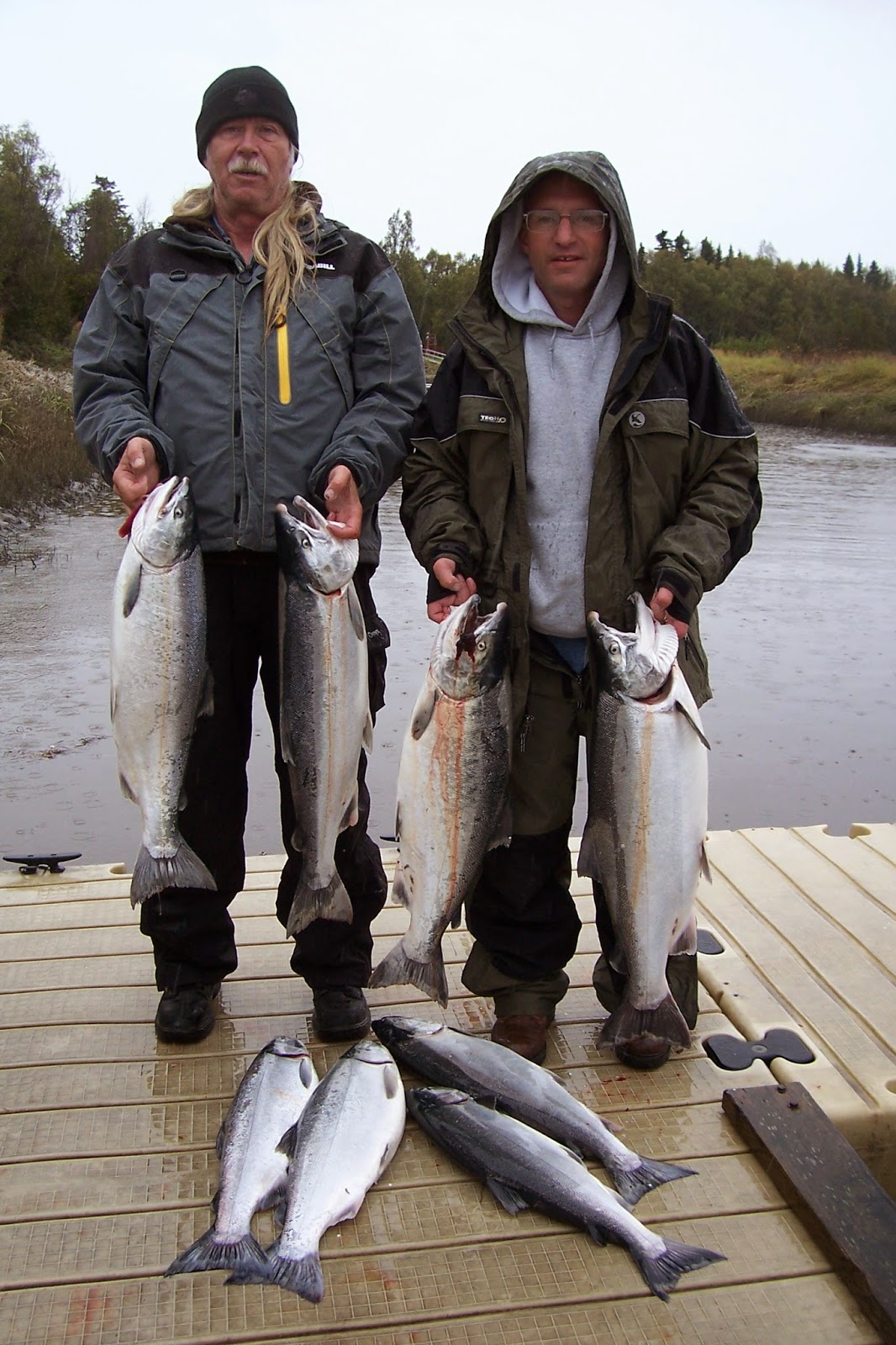 "Esko" Bill and "Thompson" Kenny had a great week in Alaska.   They spent some time with me on the river and found quite a few other fishing spots on the peninsula to fish on their own. 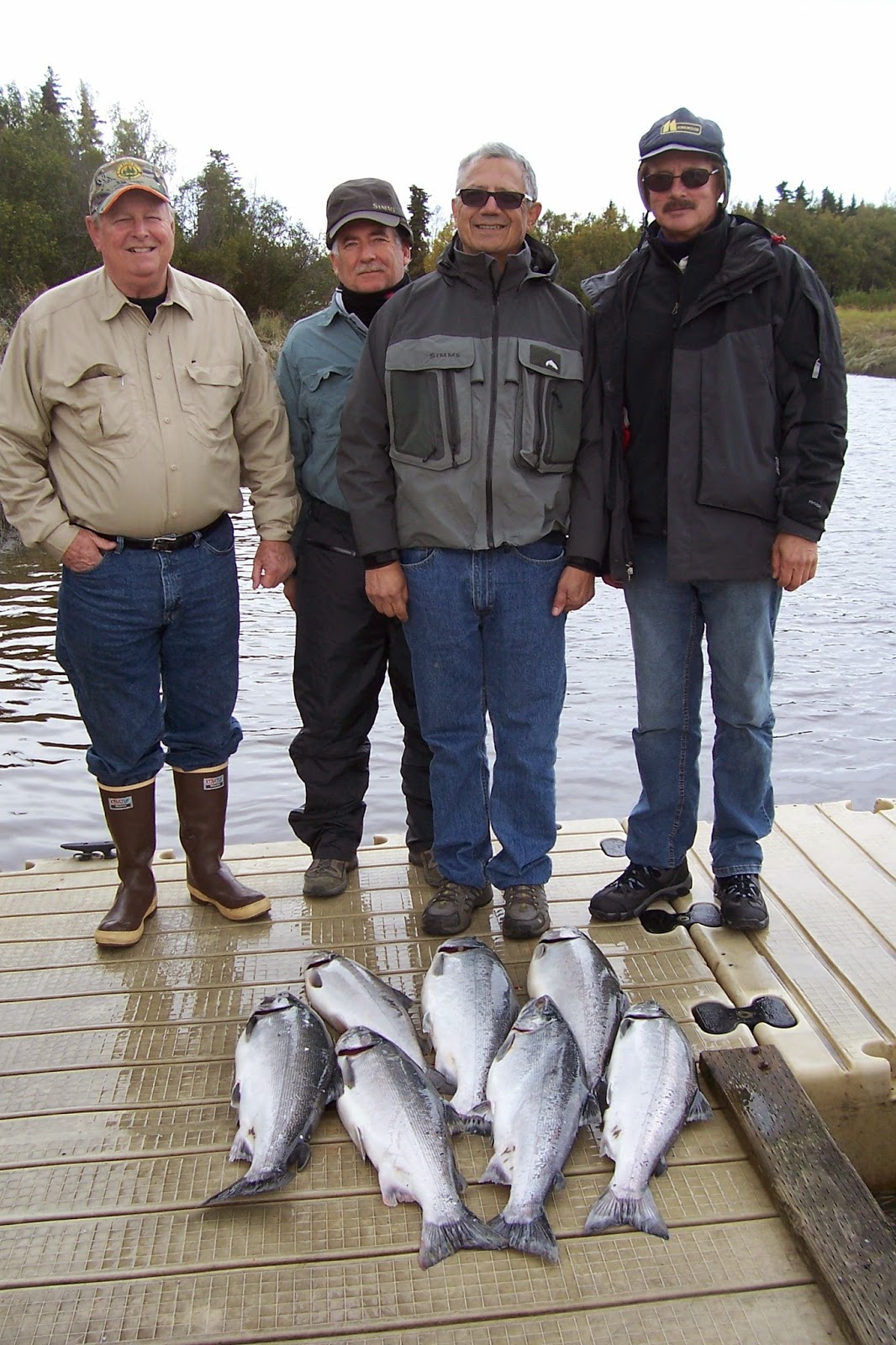 Here's Dan, Ron, Joe, and Jeff after a day on the water.   It's always a great day for me to be in the boat with guys who have done this before.   We've all had more productive days on the Kenai, but this wasn't bad either. 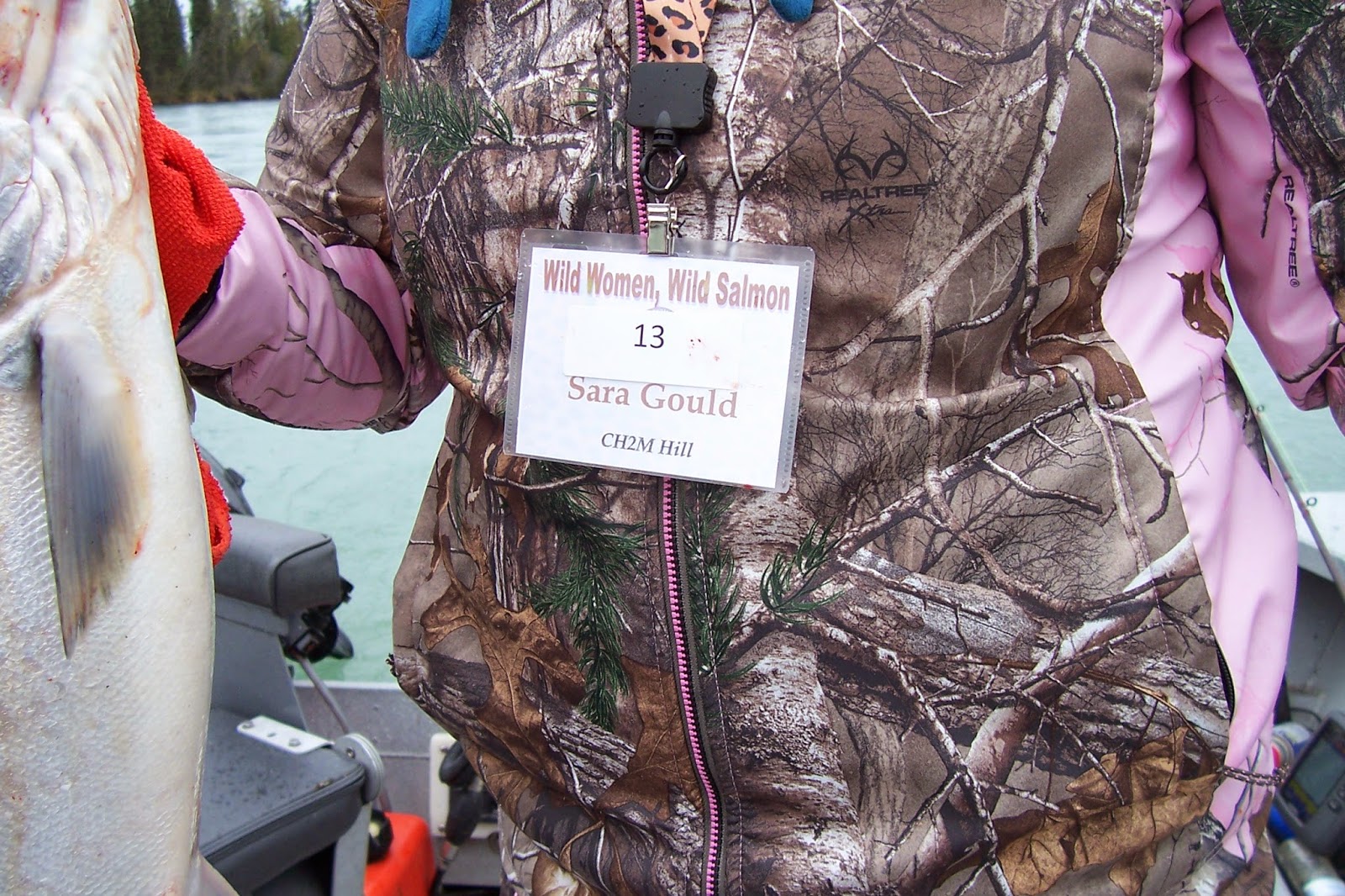 On Friday and Saturday I was a participant in the Women's Classic event.   Lot's of fun fishing boat loads of women.   If you notice in the photo of above, the event was about "Wild Women, Wild Salmon."    Not everyone in my boat landed a silver but at least everyone had one on.  I think the saying, "Fishing is the least important part of fishing" characterized this event.  Definitely a weekend for people to network. 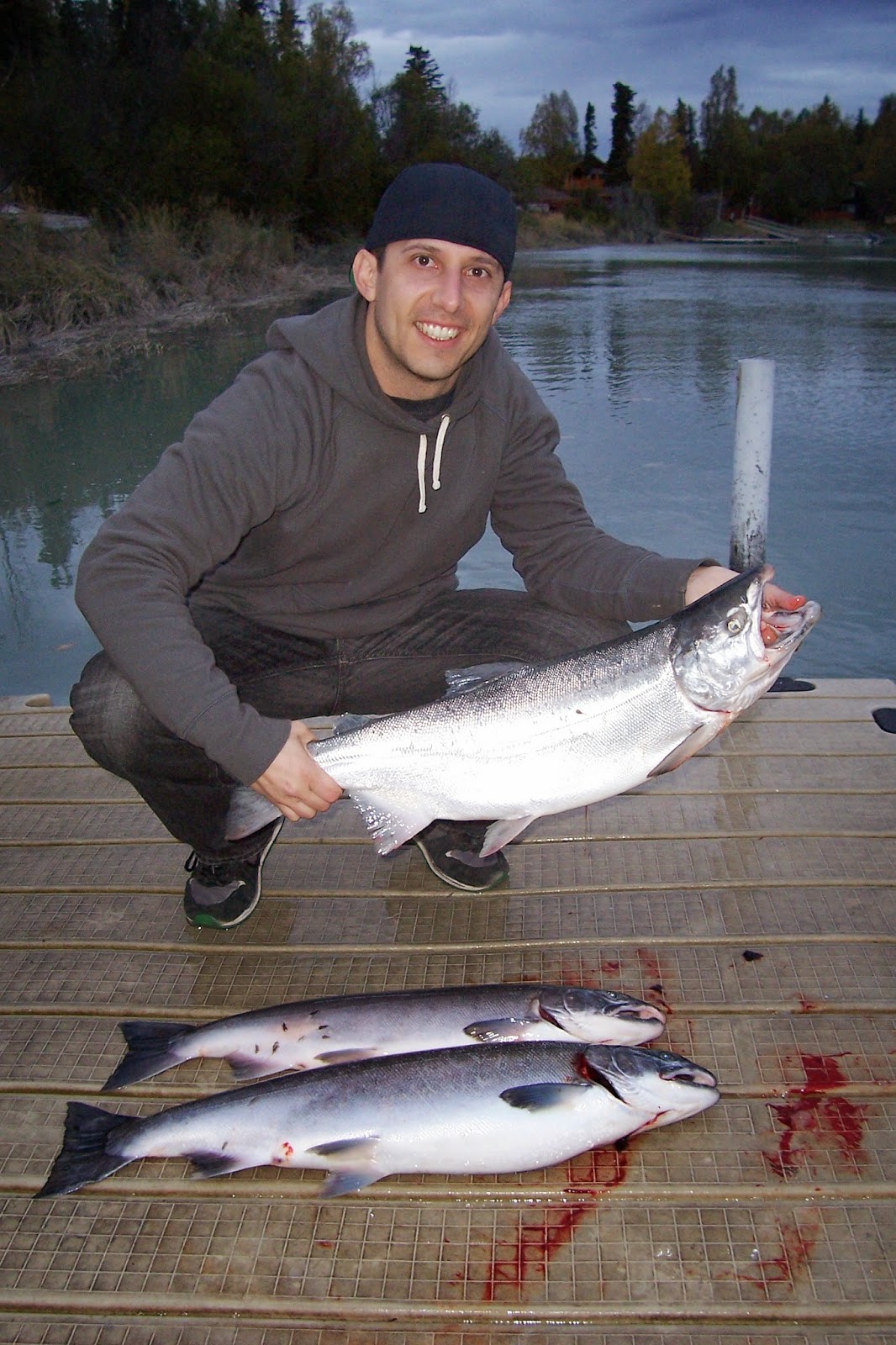 I ended the week fishing with Joe, Ron, Jeff and Rafael (pictured above).    I thought with the timing of the trip and having a moderate tide the fishing would be much better (so did Dan Meyer). We fished in the morning and caught one fish.  We went back out in the evening and squeaked out three more.  It was no surprise to anyone that the only limit was caught by Rafael.    He's the best red salmon fisherman that I've been around so it's only natural that his fish whispering skills would work for silvers as well.  The kid can flat out fish.

My week ahead is nearly full and my only prediction is that we'll give it our all out there.  Some years the bite remains steady until October, and some years it slows down to what feels like a king trip. I can't wait to see what happens.


Posted by Beaver Creek Cabins & Guide Service at 11:04 AM No comments: 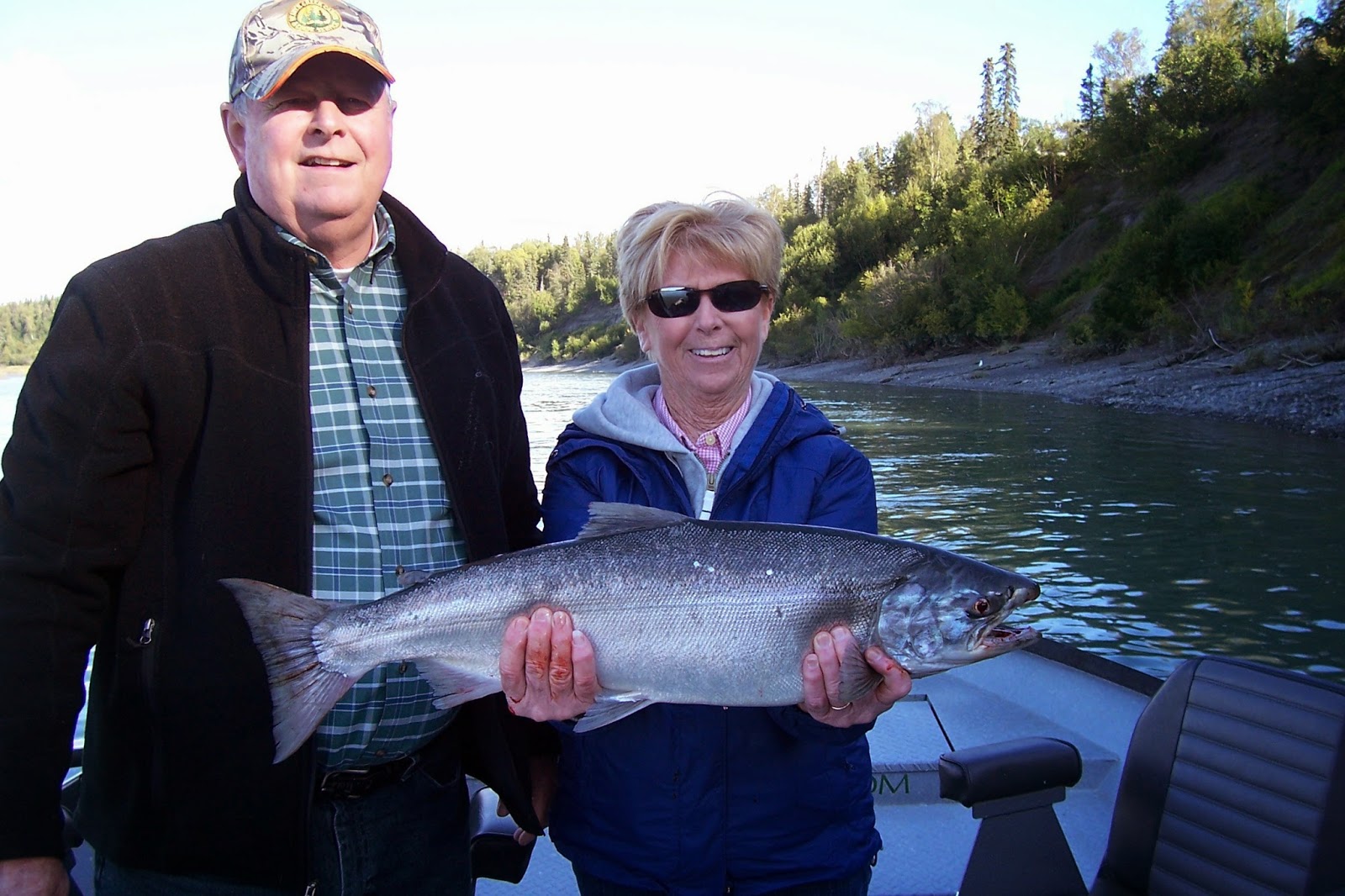 Dan and Meyer arrived this week and it was good to see old friends again.   It was a tremendous week of fishing and maybe it had a lot to do with being on the water with people like Dan and Mary.  Sure, we didn't limit out every single trip but we came darn close to running the table. 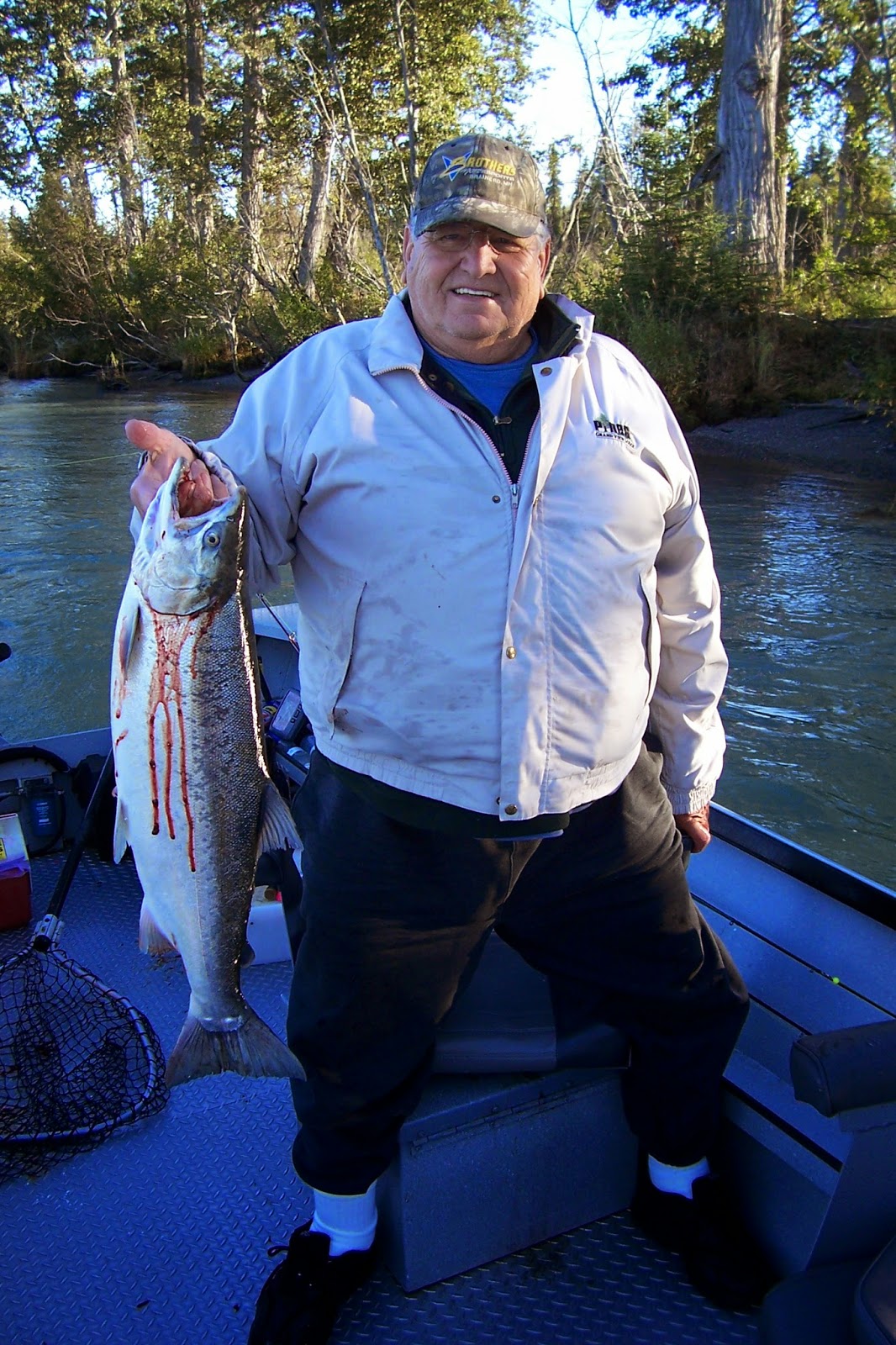 Here's an old family friend from my home town in Minnesota, Jim Vandeputte.   He's been up here to fish kings but this was his first silver adventure.   Jerry Hoffman was suppose to be on this trip but for medical reasons he had to cancel.  Get better RP, and bring Kegger with you next time. 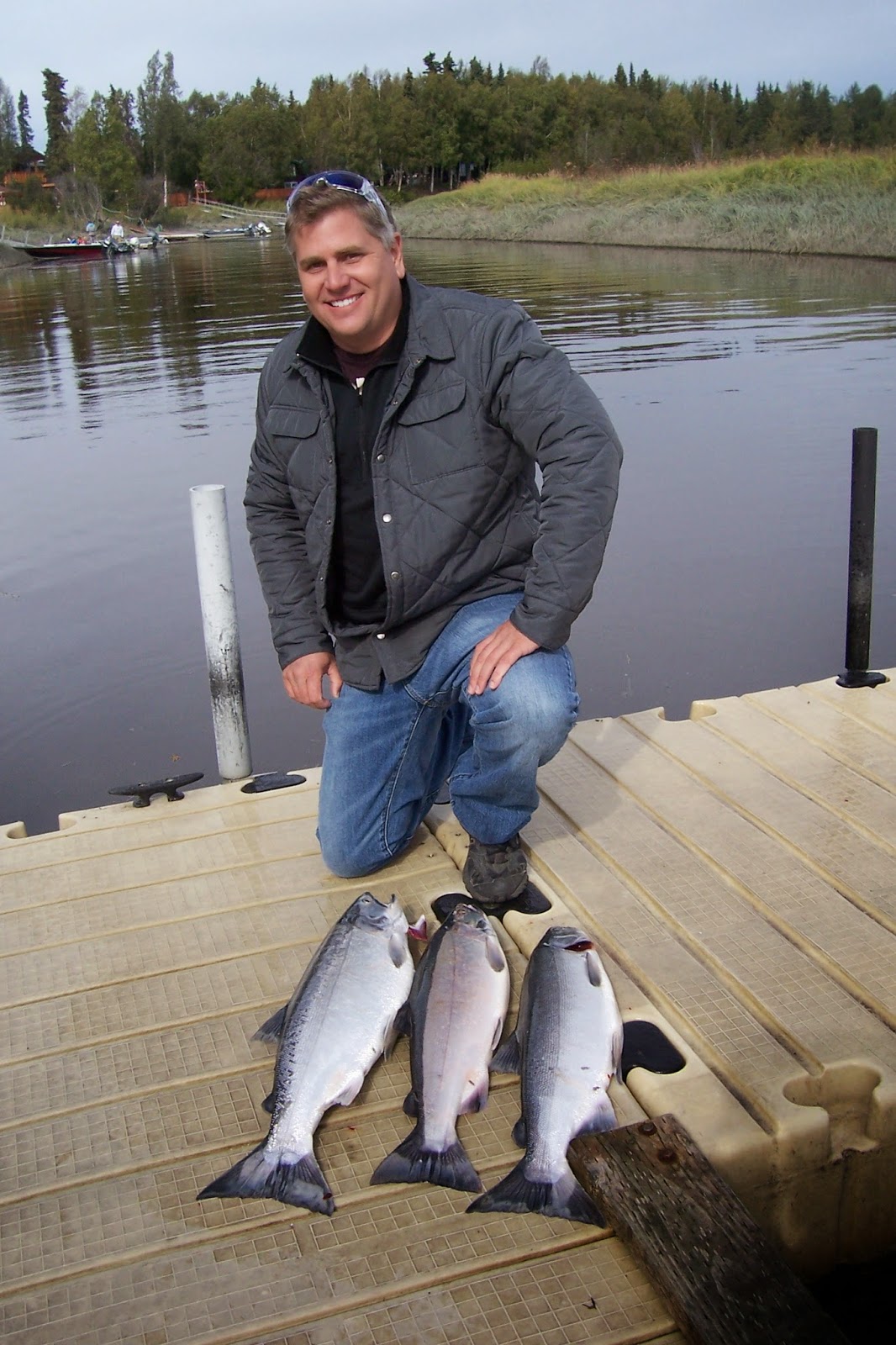 Jim, however, was not alone and brought his son Chris with him. This was the first time Chris has been to Alaska and I feel pretty confident that it won't be his last. 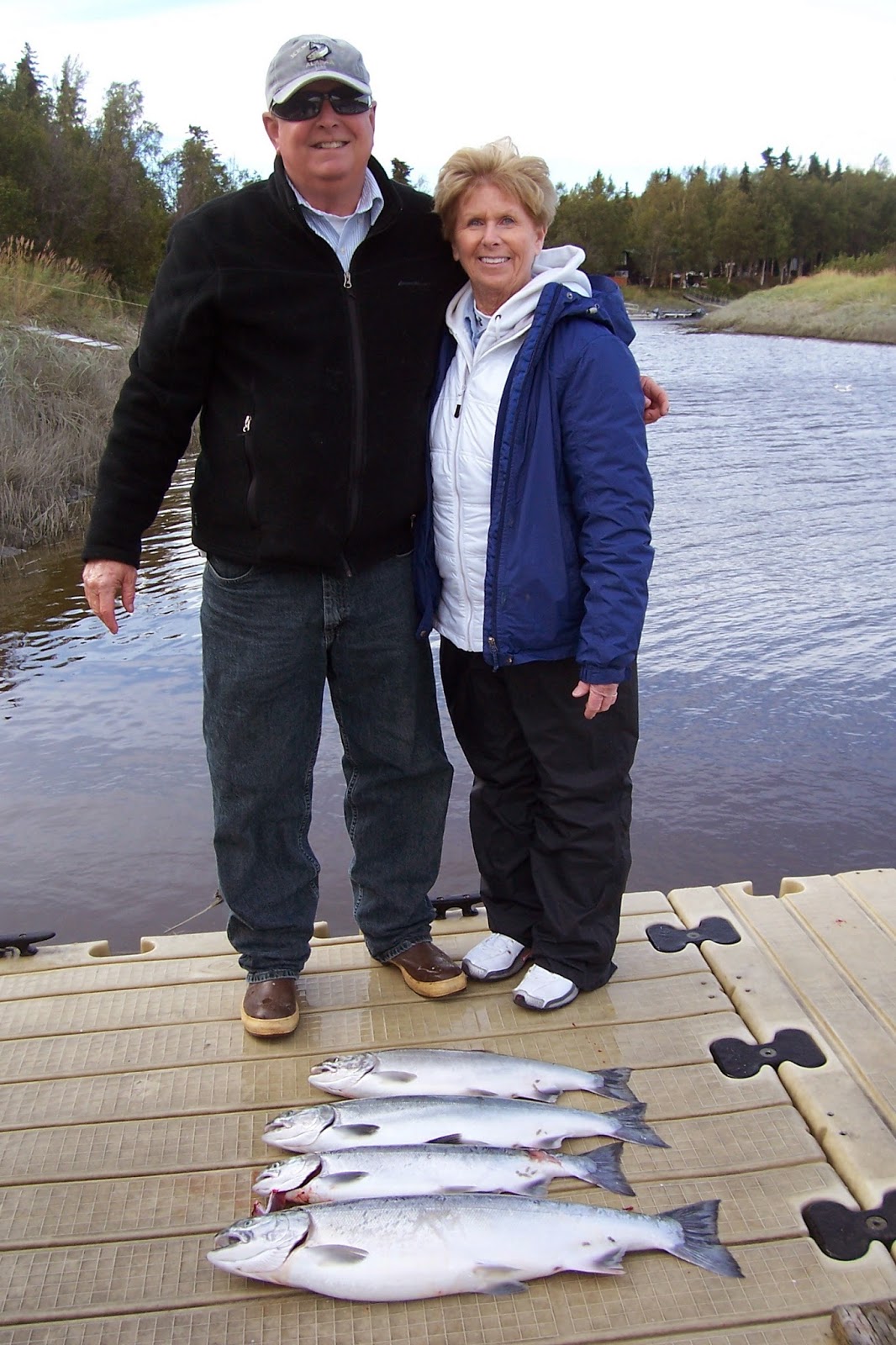 Don't know what to say but here's Dan and Mary with one of many photos that will be taken in the next two weeks. 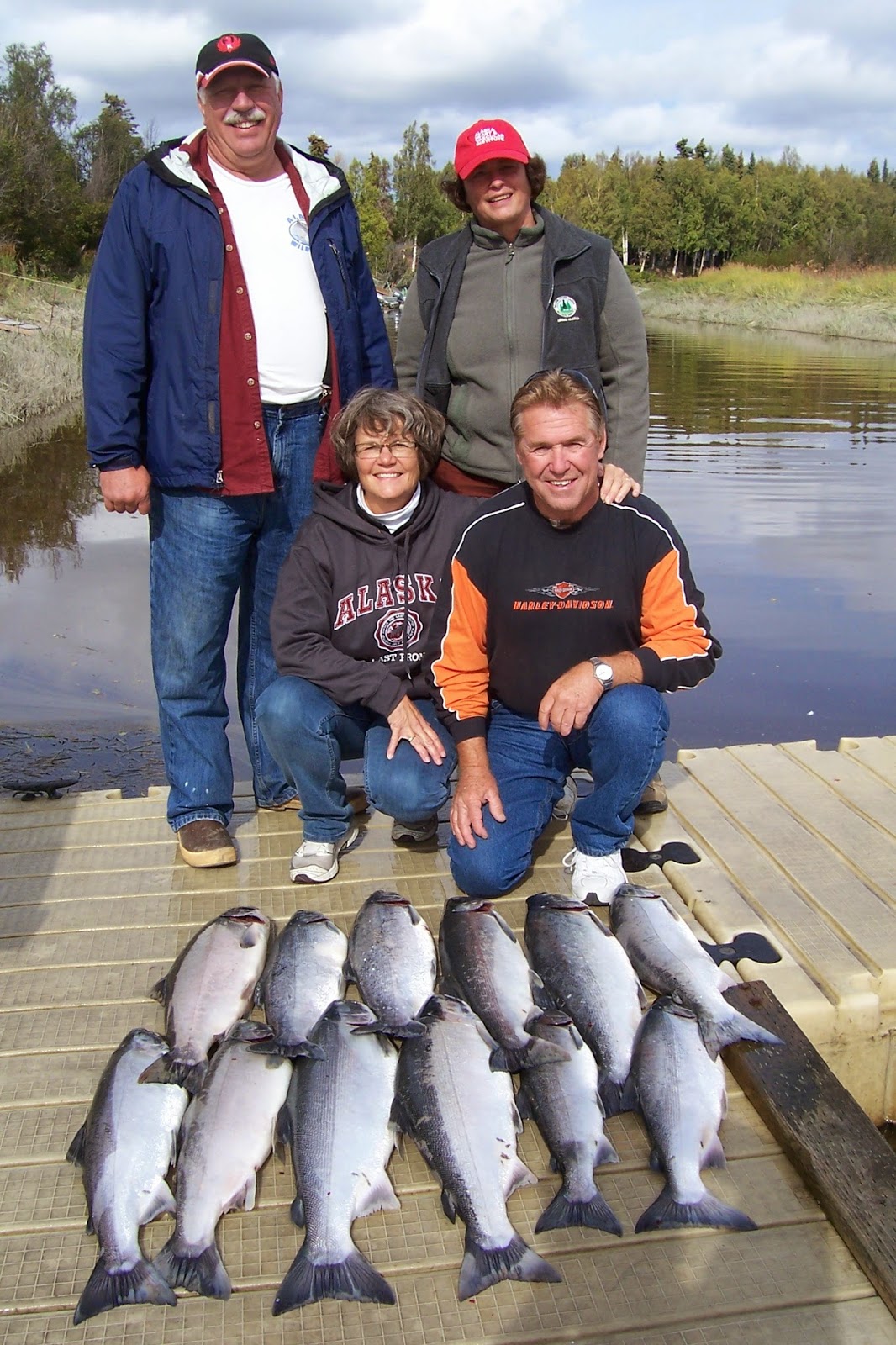 It was great to be in the boat with Bill and Linda Boettcher again.   Jane and I weren't sure that we would see them this year but out of the blue they contacted us and came down to unwind and spend a couple of days with us.   They were joined on this day by newcomers Mick and Becky from Minnesota.  A hot morning  bite and good company made the day go by fast. 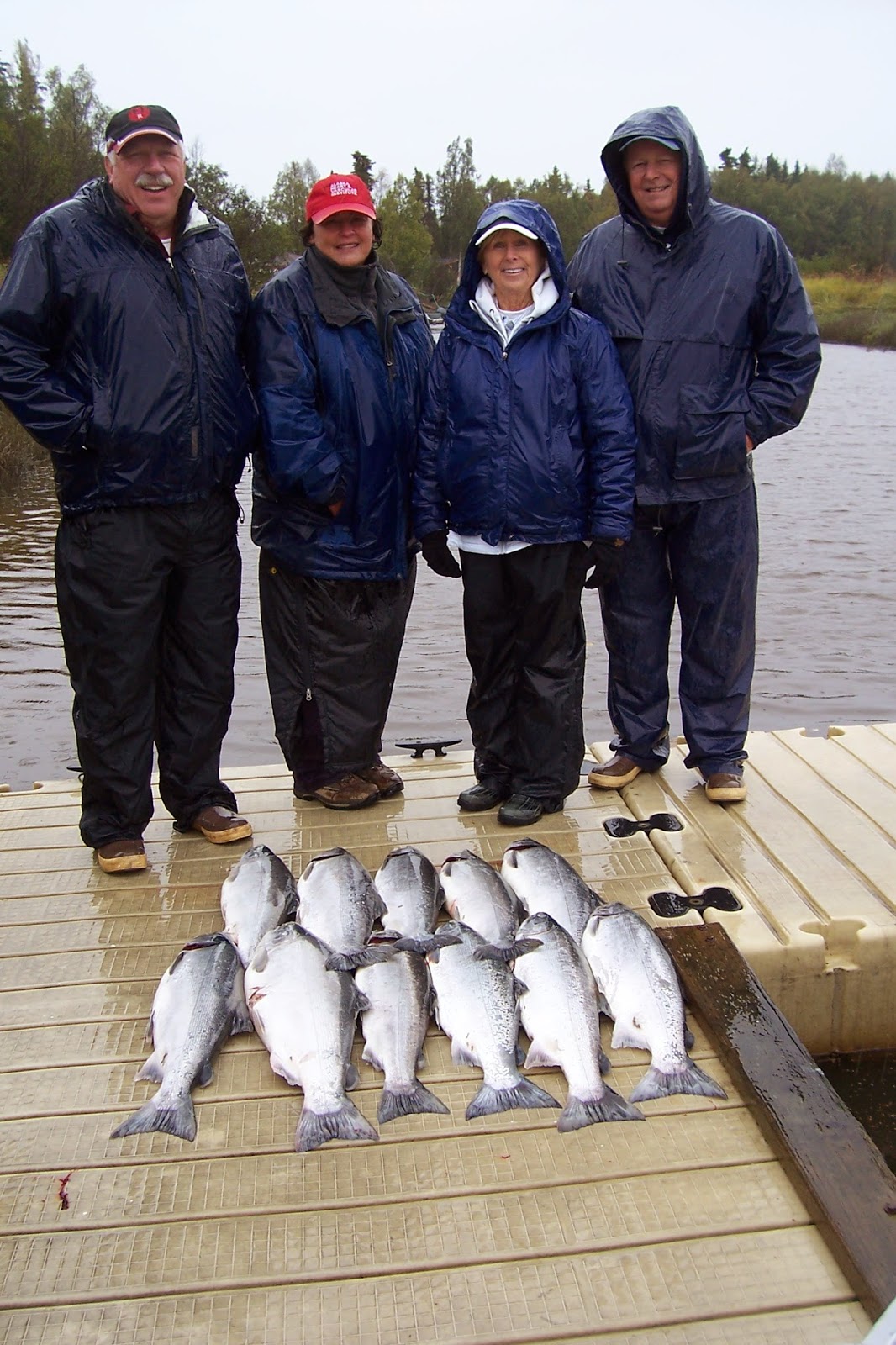 The following morning the Boettcher's joined forces with the Meyer's.  A lethal combination on a soggy day. 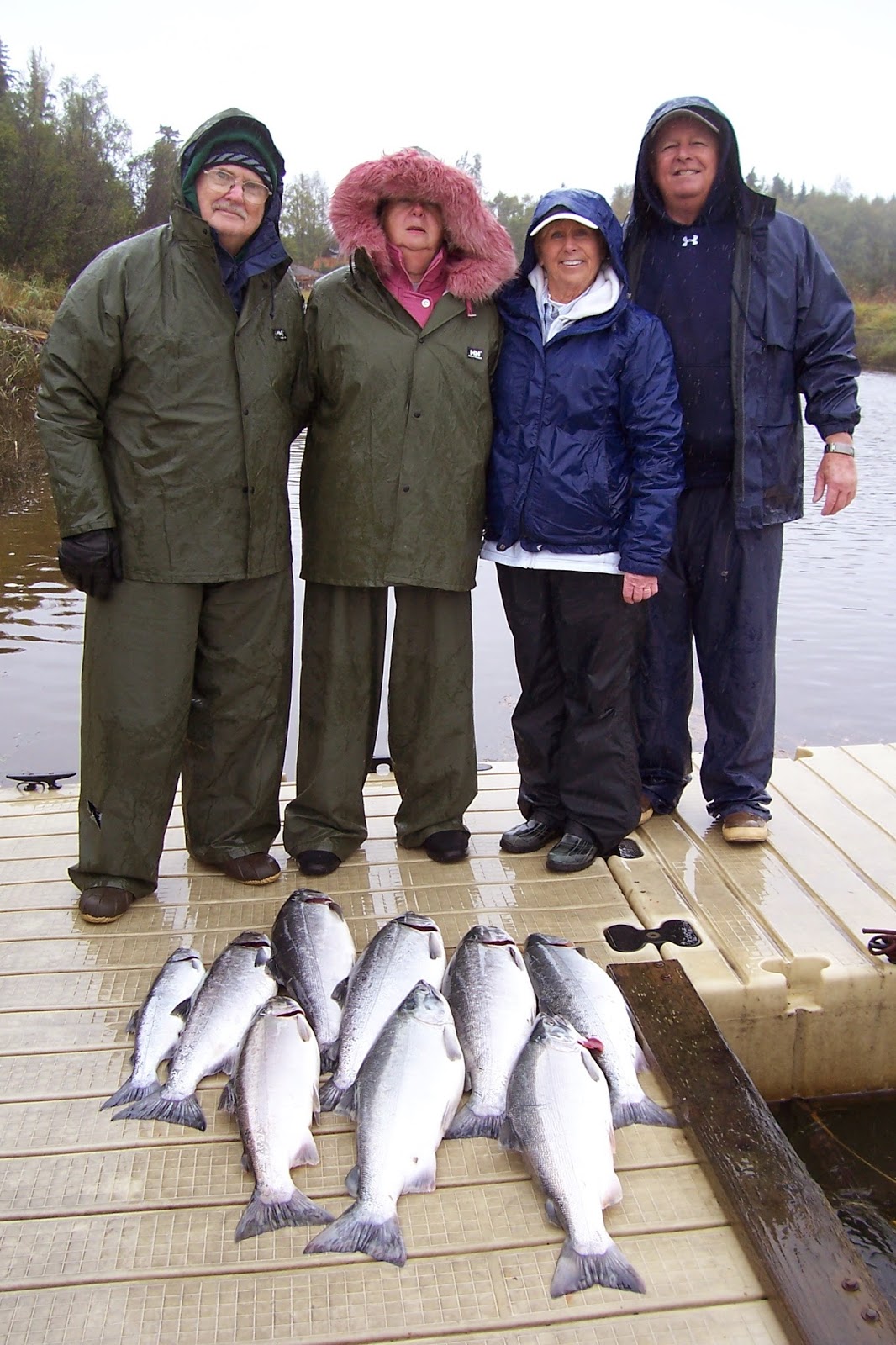 My two favorite people from Oklahoma are here again, Bob and Judy Kingsbury.  They are flanked by the Meyer's.   It was a fun day for me because this was the first time they all fished together. 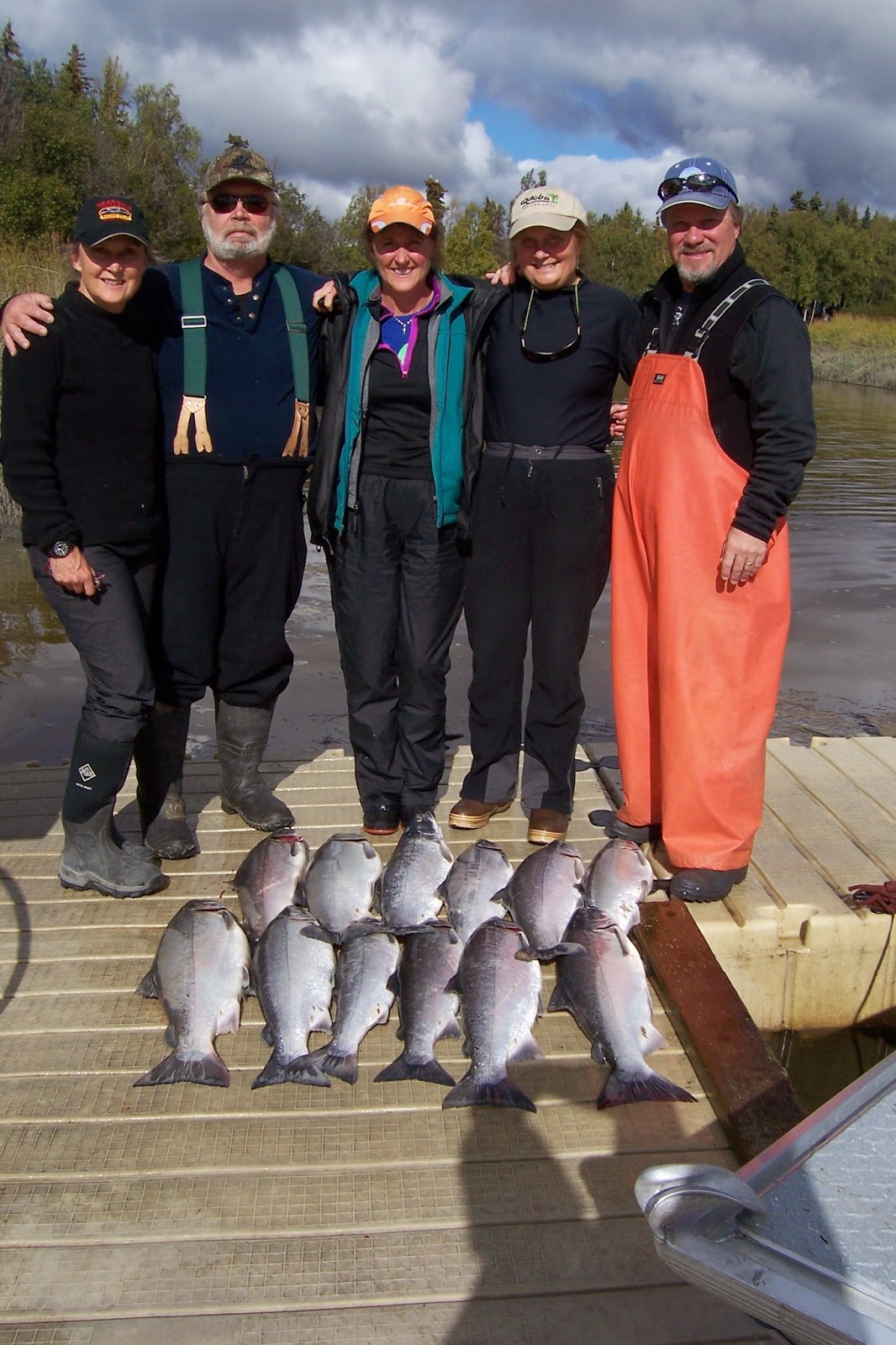 Paul Harris has been fishing with me over the years and on this trip he brought his wife, brother, and sister in law.  It was another great day to be a guide on the Kenai River. 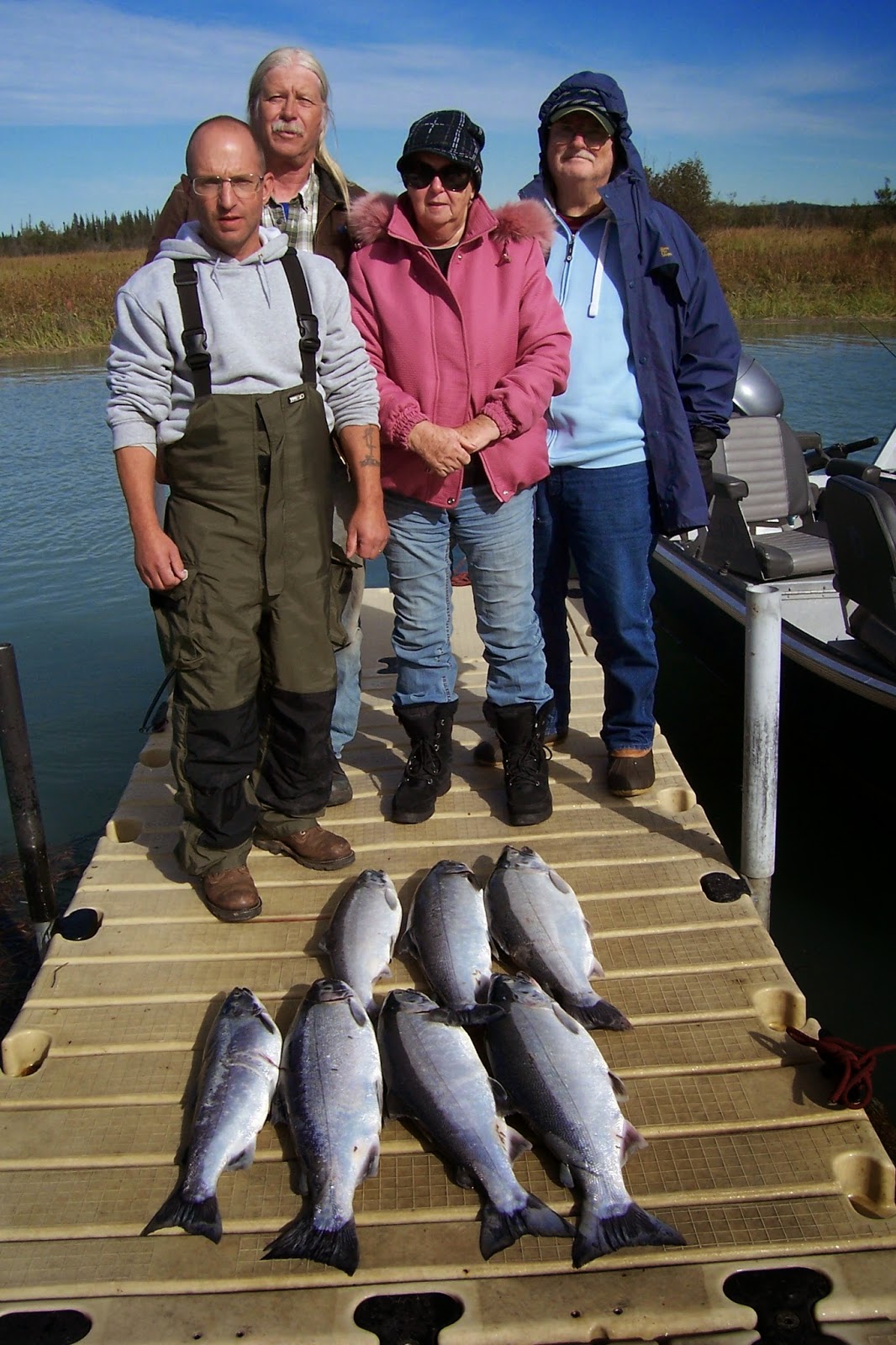 I finished the week fishing Bill, his buddy Kenny, and the Kingsbury's. It was a steady bite, and as you can see, the weather couldn't be better.   I do believe Judy's pink parka brought us the luck.

The week ahead is considered to be the traditional peak of the second run of silvers.  If it's remotely close to what this past week was like, you should see a lot of photos in my next report.   See you then.