The run is done.

If I haven't done so already, I would like to thank everyone who experienced the roller coaster of a fishing season with me. The fishing was just that....fishing. However, what remained constant were the great people that passed through my boat. I am very fortunate to do what I do and can't wait until the 2019 season arrives. 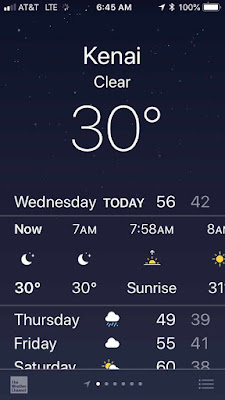 So, how was the last week of the season? One word describes it....cold. Not only the fishing, but the temperatures as well. 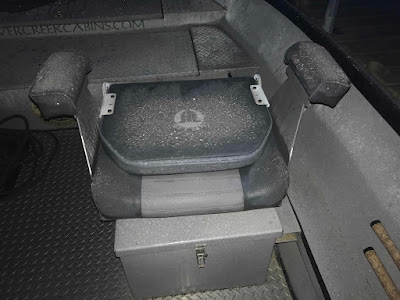 If you know of anyone who makes heated boat seats, I'd like their number... 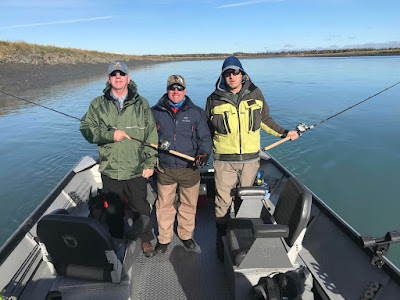 Tuesday evening was my first trip of the week. It was for only a couple of hours. Tim, Gregg, Paul 1, Paul 2, and Matt ended up catching one silver salmon. Considering we only fished one spot for a short period of time, I figured our trip the next morning would be much better. It wasn't. That's Paul, Gregg, and Matt finishing up a quiet day on the water with no fish. Thanks guys, I enjoyed your company and conversations. 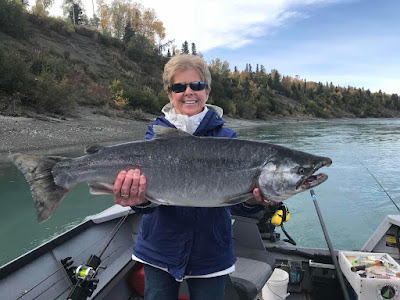 I couldn't let my day end like that so I called Dan and Mary Meyer to see if they wanted to help me find at least one fish (it's a blessing and a curse to be competitive). Mary came through with this beautiful silver. 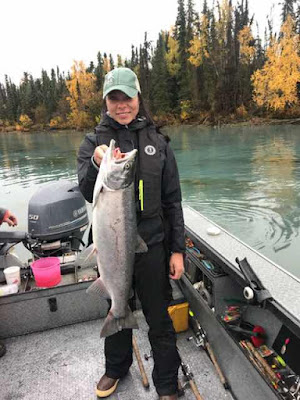 My last trip of the year was scheduled on Friday with my my college buddy Dan and his daughter Katie. Since the lower river had been slow, I decided the best use of our time would be to fish further up river. I called my friend Boo for a middle river fishing report and he said it's been okay. He also said he didn't have a trip on Friday and would graciously take the three of us up there. How could I not pass up that offer? Well, what had been okay fishing definitely dropped off. At least Katie was able to find this fish. It didn't surprise me in the least.

Well, that's all folks. It's hard to type this, but this is it for the official 2018 fishing reports. It's now time to shut everything down and get ready for winter (gulp). It doesn't mean I still won't be fishing, though. I just won't be guiding. When I do get out again, I'll make sure to share my adventure.

Posted by Beaver Creek Cabins & Guide Service at 6:26 AM 1 comment: 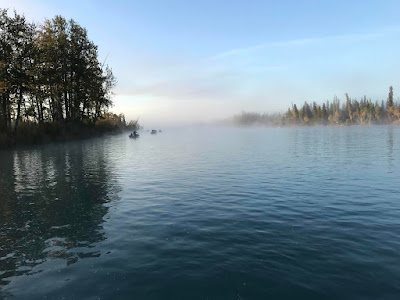 High water, due to a glacier dam burst at Skilak Lake, coupled with low fish numbers made for long days on the river. Sure, we found fish (except for a brief afternoon trip), but it was often hours between bites. 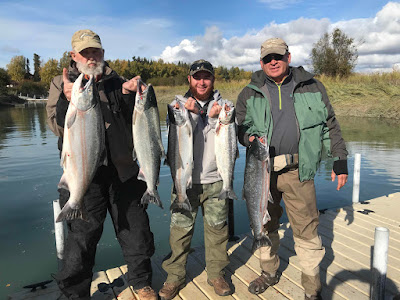 I started the week fishing Vernon, Remington, and Rick. Their real purpose for coming to Alaska was to do a remote black bear hunt. Lucky for me, just like three years ago, they were able to work in a fishing trip. Hey guys, it was great to talk about fishing, hunting, and all things Texas. 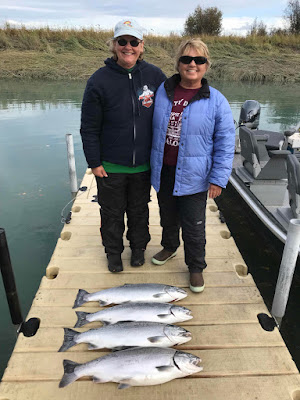 That trip was followed by a fun day on the water with Mary and Nancy. Jane, and neighbor Mary, were also on board too, but ducked out during this photo. 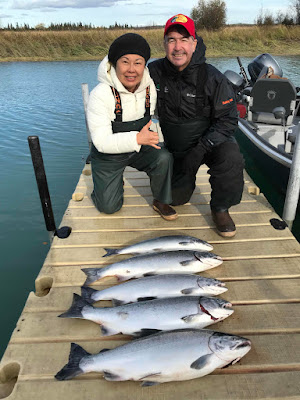 I ended the week fishing with Susan and Jim. We tried and tried to get the last fish to bite for Susan, but unfortunately we couldn't get it done. Oh well, even though you were short a fish you'll still have a nice pile of fillets to take back with you to Hawaii. 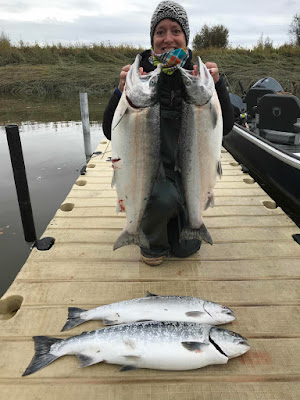 Of course, I couldn't post a fall fishing report without a photo of Jane. Her goal on this day was to catch enough fish for the canner. As you can see, she easily reached it.

Next week I have a handful of trips and sadly that will be it for the year. I know the water levels will be dropping, but I'm hoping the salmon numbers will start increasing. Come back next week to see if they did. 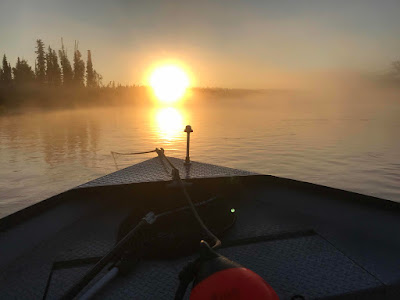 It really didn't feel like the second run hit it's peak last week. We caught fish everyday, but it took quite a bit of effort. It seemed like everyone was happy with their time on the water, but I truly expected a more sustained bite throughout the day. I guess the fish didn't get the memo that it's their time to come back to where they were born. Anyway, thanks everyone who fished with me. I really enjoyed the fishing and conversations. 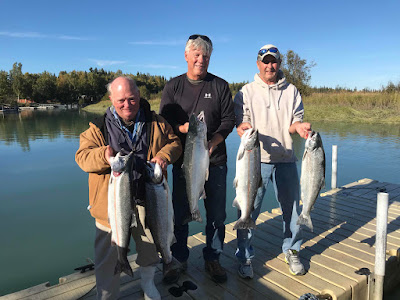 On Tuesday Joe, Rollo, and Mike caught these silver salmon. 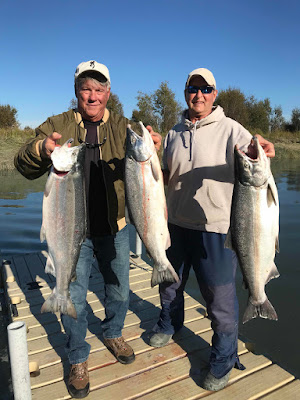 On Wednesday Rollo and Mike caught these. 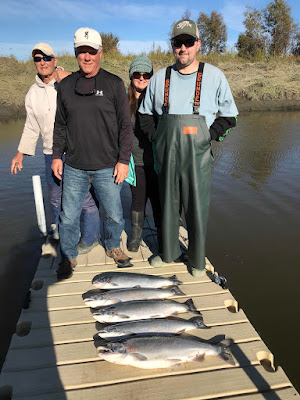 On Thursday, Mike, Rollo, Brittany, and Nick brought these nice silvers to the dock. 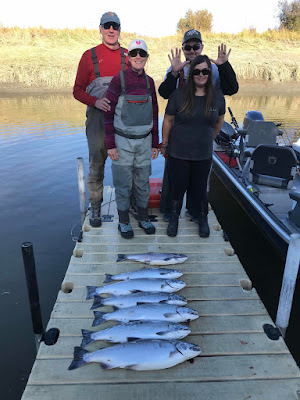 On Friday, it was Walter, Susan, Nick, and Brittany with this catch. 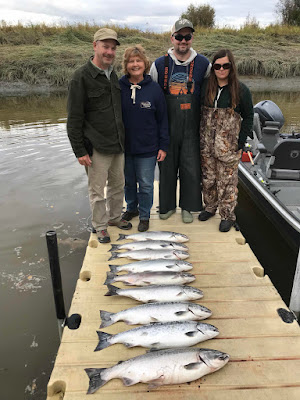 Saturday saw the most action of the week. That's Paul, Gayle, Nick and Brittany posing with their haul. 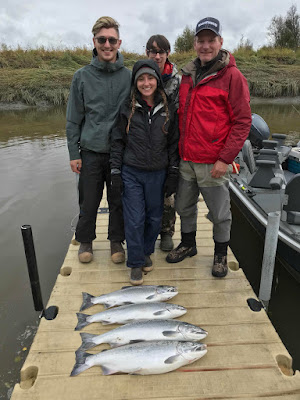 And on Sunday James, Katrina, Chase, and Gary each brought a fish to the boat. That was their goal and I was happy to help them reach it. 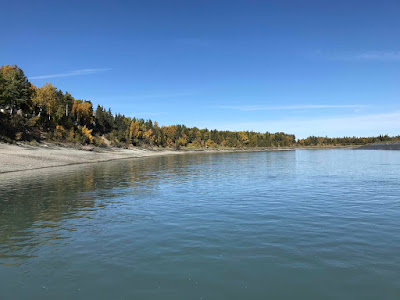 Thought I'd finish this post with a photo of our fall colors. We just finished perhaps two weeks of the finest September weather ever in Southcentral Alaska. Highs near 70 and barely a cloud in the sky. However, it all changed today and we're back to a normal rainy weather pattern. Maybe the rain will help bring in the silvers. Maybe not. Come back next week to find out if it did. 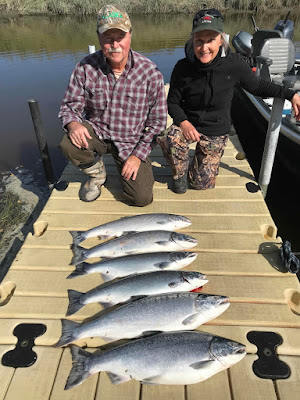 Two words describe the fishing action this past week; steady, and quality. We caught multiple fish every day, but never had fast fishing. It was just steady. And, what we caught was large, very large. I've really been impressed with the overall size of the silver salmon run this year.


I started my week off fishing with Leslie and Greg. It was a pleasure to be in the boat with you two. Their love of the outdoors coupled with their positive attitudes sure made my day easy. They asked a lot of questions about king salmon fishing in May. I hope to see you guys then. 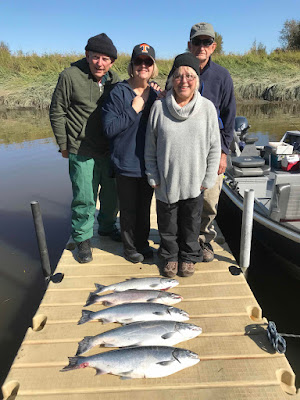 The next day, I fished with Bob, Suzanne, Cathy, and Jerry (one third of the famous French brothers). The 37 degree morning was a bit chilly for the Tennessian's, but by mid morning the cold was quickly replaced with sunshine and warmth. Although we didn't "knock it out of the park", these fish certainly filled up a fish box for them. If you come again in September, remember to wear twice as much clothing as you think you should.....there's no such thing as bad weather, just bad clothing! 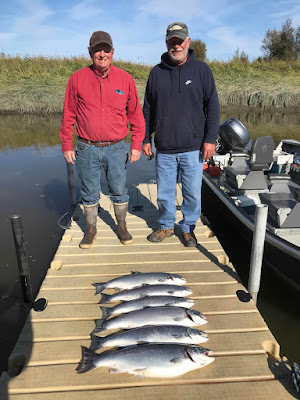 I had an afternoon trip the next day and the weather couldn't have been better for September. That's Dan and Rod standing behind their limit of silvers. Who said silvers won't bite on a bluebird day? 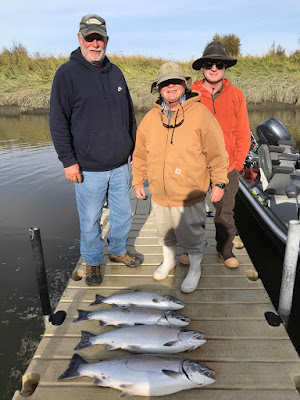 Since it worked so well the day before, I decided to stick to the afternoon schedule. Although not as successful as the day before, the results were not bad. That's Rod, Joe, and Tom. 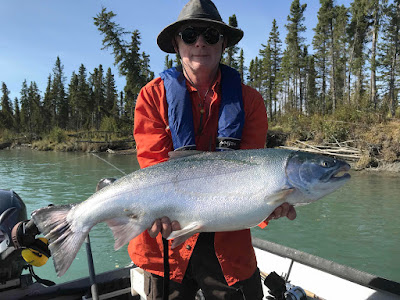 Tom, who is my brother-in-law, deserves a separate photo of his fish. This 18lb silver salmon is perhaps the largest silver ever caught in my boat. Good on ya, Tom, now you have family bragging rights (although Heidi can still say she's caught the most). 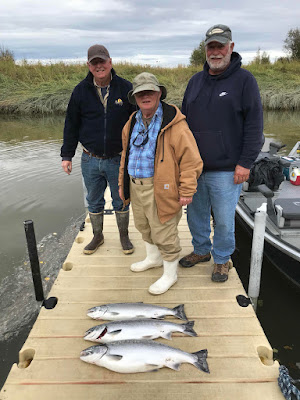 Our third straight day of fishing in the afternoon was our least productive. Oh, we had our chances, but only three of them found their way to the net. That's Dan, Rod, and Joe posing with their catch. 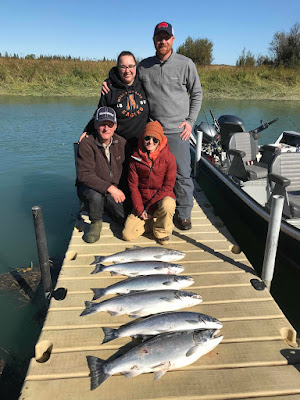 I ended the week by getting out in the morning once again. The first hour or two saw the most action. That's Gary and Nicky kneeling in the front, and Chris and Amanda standing in the back. Definitely a quality day, and by quality I mean both people and fish. 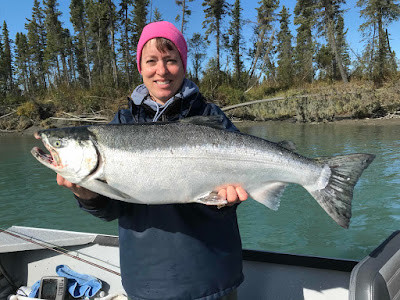 Here's another reason why I like to fish for silver salmon in September. It's the time of year that things are starting to slow down a bit at the cabins, and I get to spend time on the water with Jane. She doesn't want to admit it, but she's pretty good and catching fish.

The week ahead is when the fish biologist say the peak of the second run should occur. Come back next week to see what Mother Nature has to say about their forecasts/predictions.