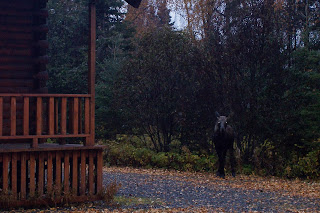 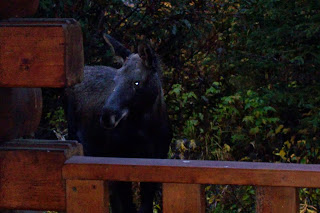 Whatever you do never look in to his glowing eyes.  You'll forever be under his spell.

Happy Tricks or Treats everybody. 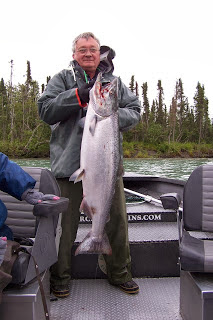 God, grant that I may live
To fish until my dying day.
And when it comes to my last cast
I then most humbly pray

When in the Lord's safe landing net
And peacefully asleep
That in His mercy I be judged
As good enough to keep.

As I stated in an earlier post, on 8/23/13 I lost my good friend Phil Dreyer to pancreatic cancer.  I know that saying goodbye is part of life but it's never easy.

When I was told that Phil had pancreatic cancer I started to keep a list of "Philism's".    My only regret is that I didn't start this earlier because the man was full of one liners.    Here are just a few.

Perhaps my favorite story with Phil happened several years ago when we were fishing for silvers on a cold September morning.   One of the guys that Phil brought with him was the president of a major international corporation.   The night before our trip, knowing that the morning would be cold, the president asked Phil how much clothing he should wear.   Phil told him to "just put on your rain gear, you'll be fine."   We headed out on the river at O'dark thirty and after a couple of chilly hours on the water we came back to the cabins for a quick pot of coffee.   I stayed in the boat while the group headed to their cabin for a short break.  Phil came back by himself and he was laughing so hard he had tears in his eyes.  He said, "You wouldn't believe it, but as the president took off his rain gear all he had underneath it were his boxer shorts and a t-shirt.  I told him you're suppose to wear your rain gear over your clothing, not just your underwear."    He said the president was shivering while fishing and said he didn't want to say anything  about how cold he was because he didn't want to seem weak.   All he could think  was "how tough you Alaskan sons-of-a-guns are fishing in 30 degree weather in your underwear."    Absolutely priceless. 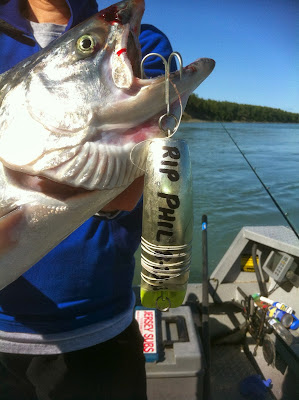 There's been a couple of times in my life where I paid a tribute to those who have passed by personalizing a kwikfish lure with a sharpie pen. It's been for people who I've shared this great river with.   I've done it for my dad, Chris Simmonds, and now Phil Dreyer.  The day after Phil had passed Jane and I went out silver fishing.   I immediately caught a fish with the "RIP Phil 8/23/13" kwikfish.  In the past I honored this moment by releasing the fish and cutting the lure loose and letting it float down the river to the ocean.   A gesture of respect, if you will.   I was all set to do this when I realized that Phil would have thought this would have been a waste.  You see, in all the years I fished with Phil he never, ever, released a fish and this would have been an insult to him.   I thought about cutting the lure loose but I could hear his voice saying, "Are you crazy man, that lure just caught a fish."   I continued to fish this lure and caught another salmon to complete my daily limit. The lure is now retired and hangs on the wall of my rod shed.
Thanks, Phil for being a good friend.   And, for sharing with me your grandmother's recipe for the best dang meatloaf in the world.   My only advice to Phil's wife Debbie:  things will get better with time.

Posted by Beaver Creek Cabins & Guide Service at 10:11 AM 2 comments:

The Dock Is Out 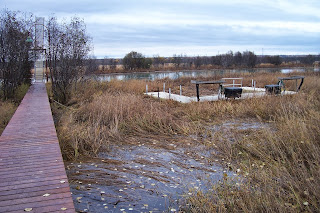 The obligatory season ending photo of the dock being taken out. 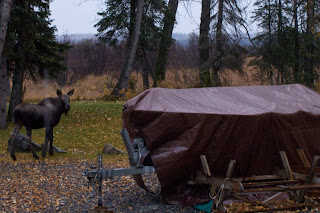 I also winterized the boat the same day and when I finished wrapping it up a year old moose decided to hang out in the yard. 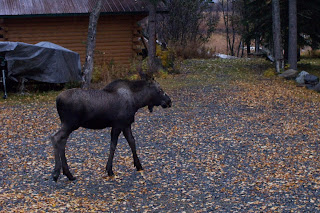 The browse must be good this year because this is a very healthy year old. 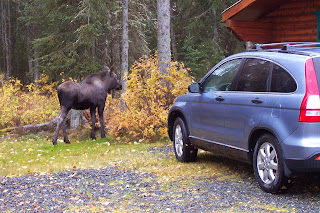 After I took these photos and put away my camera Momma Moose decided to see where her baby scampered off to.   I wish I would have taken her photo but my camera was between her and the car.  Needless to say, that's a battle I'm not willing to take. 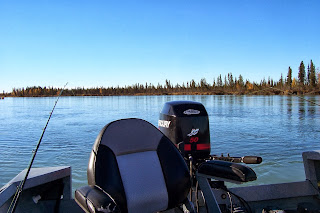 Holy cow did this season end on beautiful weather.   No doubt, Jane and I picked a great day to end the season. 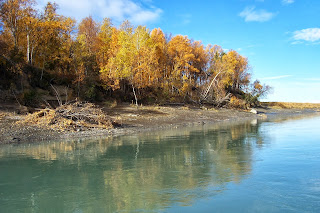 How's this for fall colors on the Kenai? 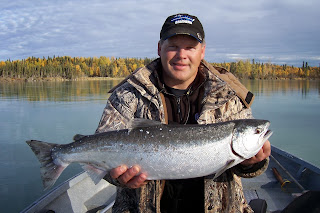 Jane and I fished for a couple of hours and this unsuspecting silver salmon made the mistake of grabbing my kwikfish.   Not a bad way to end the 2013 fishing season.....great weather and a fresh salmon for dinner.

This is the end of current fishing reports at Beaver Creek Cabins and Guide Service but that does not mean the posts will end.  Make sure to check back next week to see what else is going on other than fishing.