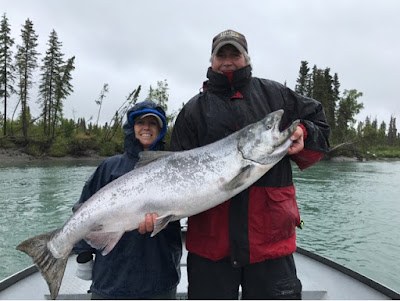 A lot has happened this past week. The early king salmon run has been stronger than expected, so the Alaska Department of Fish and Game liberalized the fishery to increase harvest. We are now allowed to use bait, and the slot limit was raised to 46".  Did this make the fishing better? In a word...maybe.

Tiffany and Dean took advantage of the first day of the regulation change and found a fish they wanted to keep. This fish measured 45", so it was good to go. It definitely fought harder than the walleyes Dean catches in Minnesota. 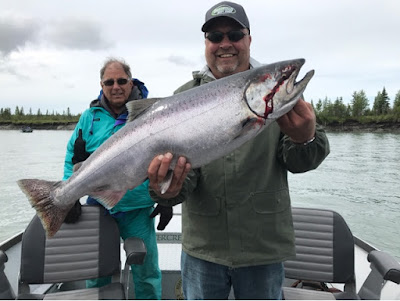 Speaking of Minnesota, these two guys are from there as well. That's Randy "B" with the king and that's Steve lurking in the back. Unfortunately, Randy "A" did not catch a fish so there aren't any photos of him. Next time, Randy "A", next time... 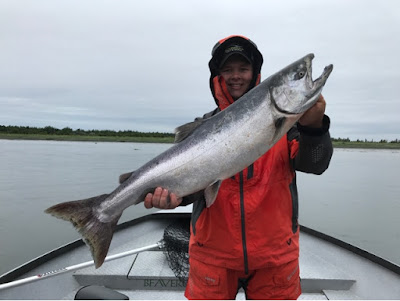 Yup, more Minnesotan's this week. As a high school graduation gift, Dan brought his son, Noah, to Alaska and to fish the Kenai Peninsula. That's Noah with his first ever king salmon. 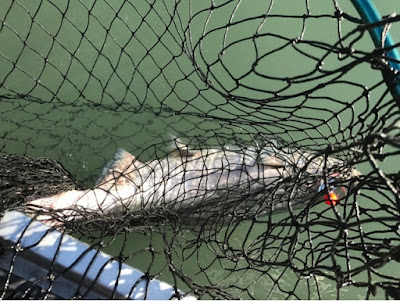 Dad Dan also got in on the king action and released this fish. 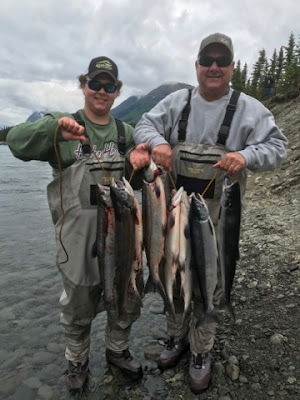 After we were done fishing for king's, Dan said he thought he'd like to experience the Russian River fishery and asked if I would go with them. Normally I don't do this when the king fishery is open, but since the reports were great I thought I would join them. 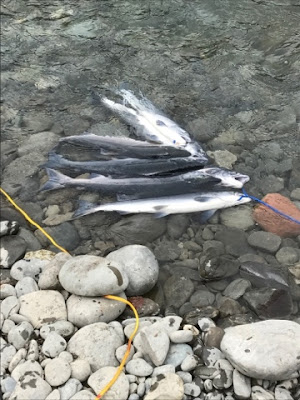 Glad I did. We had a nine fish limit in short order. These guys had a pretty good 24 hour period in Alaska. During that time they caught halibut, ling cod, black bass, yellow eye rockfish, king salmon, and red salmon. 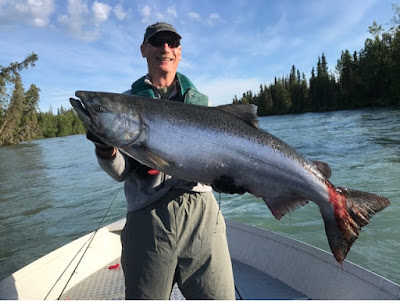 I ended the week fishing with someone who wasn't from Minnesota. This is my good friend Gary Roeder with this first troll of the day beauty. It would have been nice if Phil and Gus would have had some action too, but we were all happy for Gary (well, at least he thinks we were...ha!).

So, my fearless forecast for the week ahead. The early king salmon run is more than 80% complete, and with a large tide cycle, I expect the fishing will be slowing down. I think we'll be able to catch a fish every trip, but I just don't think it will be multiple fish. On the other hand, the Russian River will be smoking. The run has been so strong that the daily limit was increased from three red salmon a day to six salmon a day. If you want to harvest, go there. If you want a peaceful day on the water in pursuit of a trophy king, come to the lower Kenai River.

Looking back at my forecast last week, I was right on one thing, and wrong on another. I was right that the water conditions in the beginning of the week would be marginal, and I was wrong that fishing on Father's Day weekend would be great. I was really hoping that the trips I postponed in the beginning of the week would pay off on the weekend. It wasn't that the weekend was awful, I just thought I'd see more than a handful of fish caught. 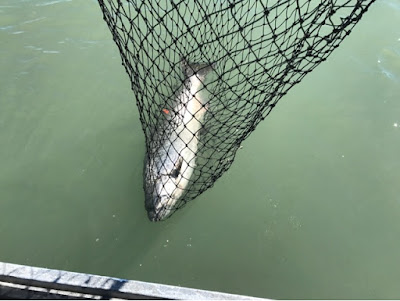 As I said, it wasn't awful fishing, it's just that the bites were few and far between. Here's a decent king that Kevin released. This was a twenty pound fish and it was caught within the first half hour of the day. Kevin came to fish, and not harvest, so this was sent back. As the day wore on Kevin did confide that if were a bigger fish he would have kept it. He said sitting in a boat for eight hours without fishing was more painful to him than releasing a twenty pound fish. 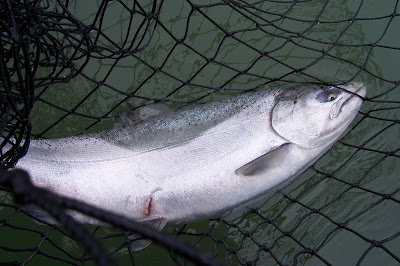 And here's another fish that was sent back on it's journey by Mike. I wish I could have got a photo of you releasing the fish, but we will do that next time! 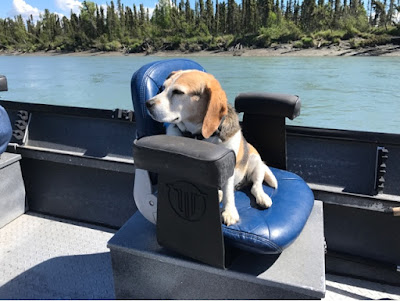 Well, how cute is that? My neighbor Rusty called me Thursday afternoon and asked if I wanted to join him on his first day running the river. I like Rusty, but I was really excited when he pulled up to the dock with the World's Greatest Fishing Beagle, Lily.  We boated, and fished, and I managed to catch a small king that was released. Lily is good luck and I asked Rusty if I could baby sit her until October... 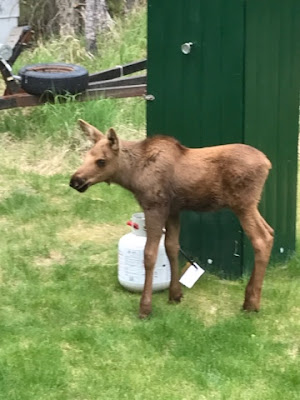 Adding to the cute factor this week was this baby moose hanging out around our fish smoker. The little guy is probably wondering when the next batch of fish will be done.

My fearless, forecast for the week ahead is that I'll be on the water for many hours. I'm optimistic that we'll be able to find a few kings that want to bite. If that's not the case, my first hand reports from the Russian River has been that for the people who know what they are doing, the red fishing has been great. Vernon, who I guided on Saturday, said on one day it took him fifteen minutes to catch his three fish limit. On another day, it took an hour.

Tight lines everyone, and see you back here next week. 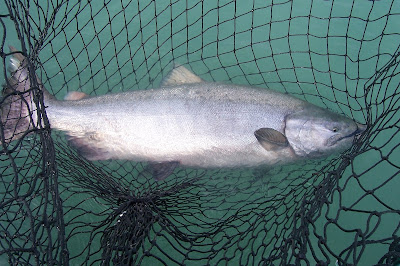 In the beginning of the week, the water conditions remained excellent and the fishing reflected that. By the end of the week, the river had begun to rise, the water visibility deteriorated, and the temperature dropped nearly ten degrees. Fishing became tough. 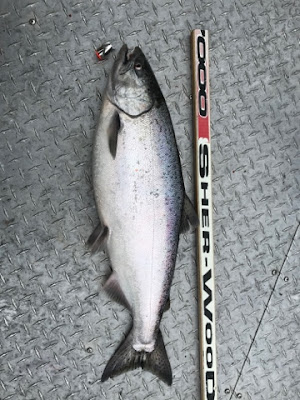 Here's a really nice fish, and it's under the new 36" slot limit. Although not "Kenai large", this size king salmon still provides quite a few meals for people wishing to keep fish to eat. The real reason I included this photo is to show off my new measuring stick. Anyone can use a ruler, but who else do you know would use a vintage 1990's wood hockey stick? Besides a measuring tool, it's also a great fish whacker. Hmmm, imagine that. 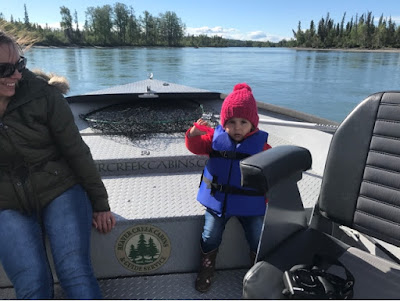 This week I had several groups and on Wednesday I had the pleasure to spend the day with the Miller family. That's mom, Anna, on the left with two year old McKenzie. I tell you what, I am going to give out the Fisherman With The Most Patience Award right now to McKenzie. She spent over eight hours in the boat and half the time I didn't even realize she was there. I think it helped that I took the hooks off of one of my favorite lures and let her play with it. If you zoom in on her hand you can see it in this photo. What a nice, young family. 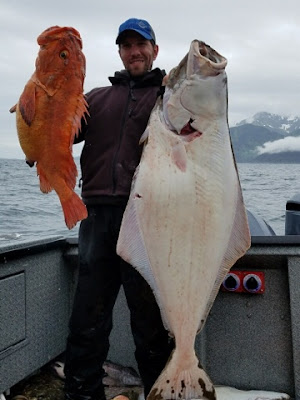 I really wish I had a photo of dad, Eli Miller, holding a Kenai king. Instead, I'm using photos from a saltwater trip he took this week with Boo Kandas. As you can see, the fishing was very good. 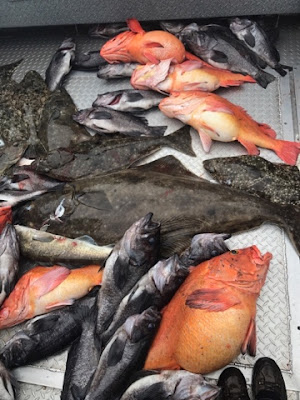 Although Eli came to Alaska with the intent on catching a salmon, he ended up catching six other species he wasn't even thinking about. One of the six was a nice rainbow trout on the Kenai. That was a first for him. Since his salmon ticket wasn't punched, I have a strong hunch he will be back again soon.
If you're in Alaska right now, you know what day it is today. It is the Russian River sockeye opener. If you're anti-social, this is definitely not your fishery. I would say based on my own observations of the pass through fishery on the lower Kenai, and a report coming from ADFG, the fishing should be good if not great.
I should have some better intel about the Russian River fishery in my next post.

My forecast for the week ahead on the lower Kenai is that fishing will be tough early in the week. The river should moderate mid week, just in time for the historic peak of the first king run. It could be a great Father's Day weekend to be on the Kenai..... 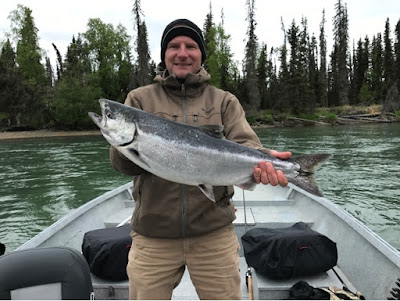 Or I should say, it's happening.

Because of the volatility the last few years during the early Kenai king run, my bookings have been down. A big part of this is because Jane and I have been steering most of our business into late summer and into fall. Rarely is fishing restricted or closed. In other words, it's much more predictable and it's an easier "sell". I know it's going to take some time for people to have confidence in the early run fishery, but right now the fishing has been pretty good and it's been a joy running up and down the river with so few people out there.

One guy that's been busy guiding this early in the season has been my ol' buddy Jeff King. Let's just say, he's been ripping it up. You can read about his adventures and see photos of the kings he's caught if you click here.  Well done, Jeff, well done... 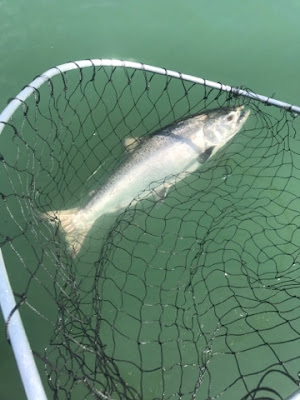 For me, for the amount of time spent on the water last week, the fishing was good. Here's one of the kings that was released. 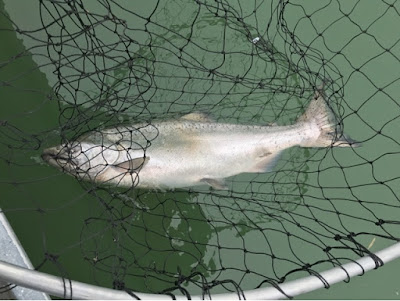 This fish was over the 36" slot limit and turned loose. 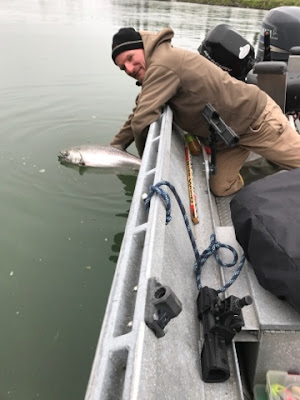 This was fish was under the 36" slot limit but Gary decided to release it. That was a good thing because he was rewarded later with a fish under 28". The reason I say rewarded is that any king caught before July 1st that is under 28" is a "free" fish, and doesn't count towards the seasonal bag limit of two Kenai kings. Yahtzee! 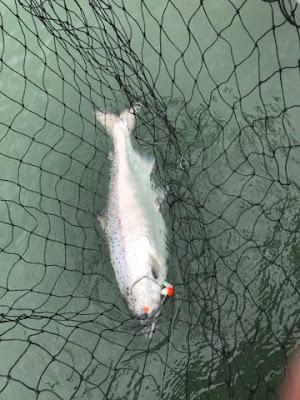 And here's another fish released. 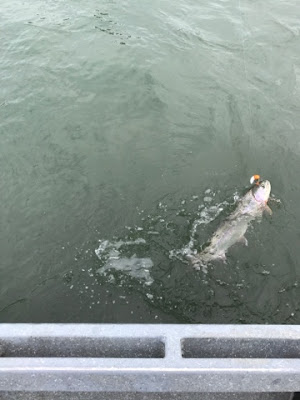 On the day Gary and I were out we had quite a few rainbow trout bite our gear. This was the largest and it measured 20". 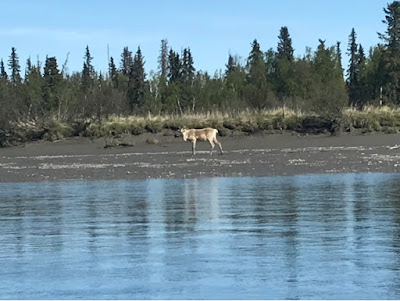 Here's another upside of fishing during the early run; hardly any boats on the river which seems to please the wildlife. This caribou watched us as we trolled on by. It was so peaceful for her that she eventually curled up on the gravel bar and took a nap. 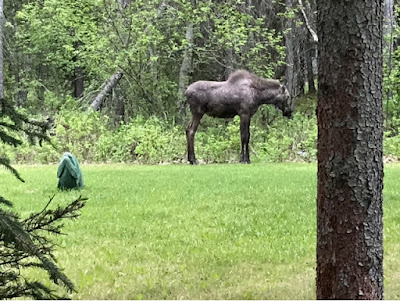 Had to include this photo of a young moose taking up residency in our front yard. If you love moose, this is definitely the time of year that you'll see a lot of them.

My calendar is light this week but I should be out fishing several times. The conditions and sonar numbers remain good so I expect the king salmon fishing to be that way as well.

A side note. Based on how many jumping red salmon that that I've watched this week, I think the Russian River red salmon opener on June 11th should be a good one. It's getting to be that time of year to dust off the combat gear and to practice yelling "FISH ON!"