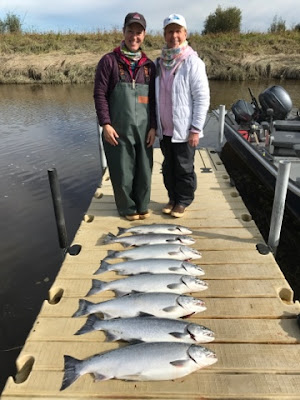 It was another fun week of fishing on the Kenai. Plenty of fish, decent enough weather, and time spent with friends made it so. 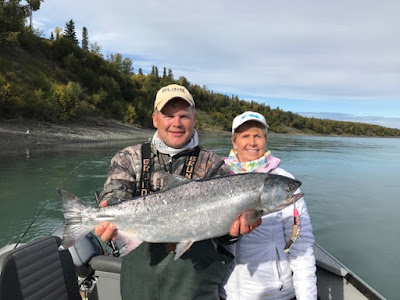 Neighbor Mary still has the touch when it comes to silver fishing. 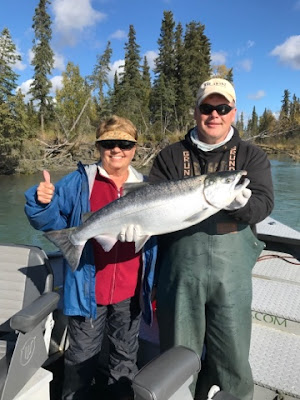 And the same with Neighbor Nancy. 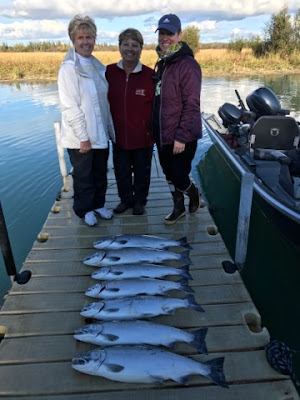 How do the fish stand a chance when there's three ladies in the boat?

The weather was great the next day so it wasn't hard to convince Jane, Nancy, and Mary (Dan too) that we should go out again. My goal was to get Nancy enough fish to get her through until next spring. In a couple of hours that goal was met.

On Wednesday, I received a text from my former "employee" and long time friend Lars. He said he flew from Minnesota to Seattle to meet up with another friend and they drove a conversion van up the AlCan Highway to Alaska. I asked if they had any plans and he said no. Perfect, come on down. I told them they should stay in a cabin and that we should go fishing. There was no argument. That's Lars on the left, and Abe on the right. It turns out that Jane and I went to high school with Abe's dad. Small world. Anyway, back to the photo above. What a heck of a way to start our fishing trip: two silvers in four minutes of fishing. 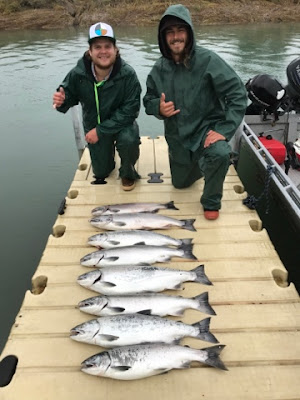 And the next couple of hours weren't too bad either. Hey guys, it was nice to spend a couple of days with you. You make me feel like our future is in good hands......

Next week could be it for my guiding season. I'm down to one last group. Although "work" might be over, you know I'll be fishing well into October. 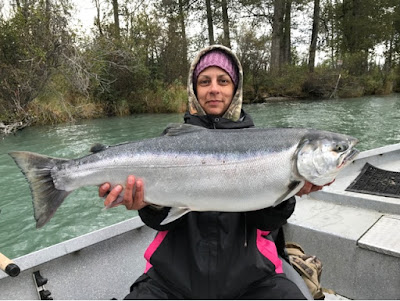 It was another steady week of silver salmon fishing on the Kenai River. Here's Michelle with a hefty silver. 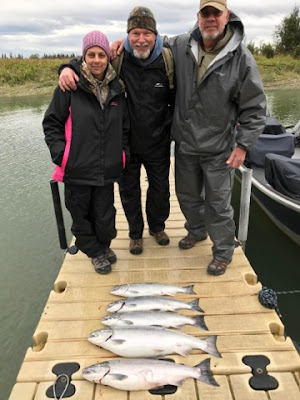 Here she is with her husband, Ken, and brother-in-law Rich. 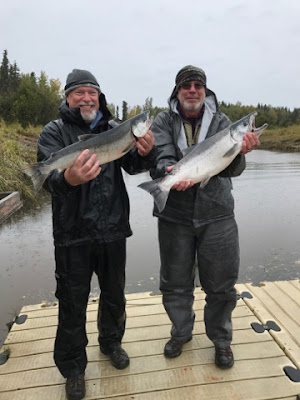 Ken and Rich trying to see who could hold their fish the farthest out. I think Ken won. 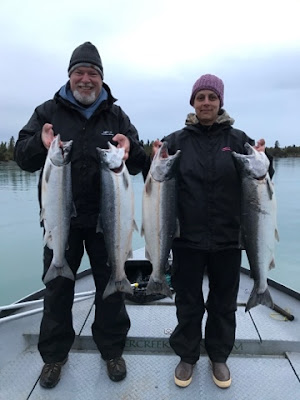 And this was the last evening of fishing with the Kovitch's. Too bad Rich decided to stay back in the cabin on this trip. It was a nice little bite going on out there. Hey guys, I look forward to the next time you're back in the Great Land. 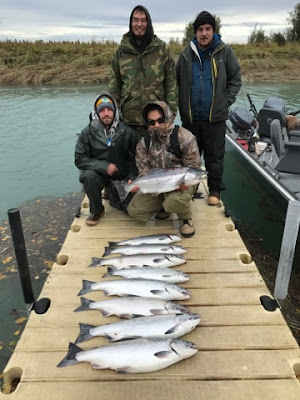 Don't know if you caught on to what I just did, but this was my annual fishing trip with the boys of Team ABC Seamless of Anchorage. Thanks Jeff and Brian for bringing the crew down. In addition, I'd like to thank Jeff and Mike for helping me guide these guys to a bunch of silvers. It was a fun couple of days for all.

Can this incredible run of silver salmon continue? I think it can. The only way to know for sure is to come back next week to see if it did. See you then. 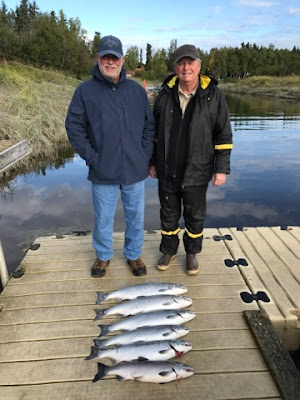 The string of daily silver salmon limits ended this past week. I believe it was due to a combination of rising, muddy water, and being in between the mid August and mid September peaks of the salmon run. Oh, it wasn't bad fishing, it was just a lot slower than the previous week.

On Labor Day Monday I had the pleasure of guiding my neighbor Dan, and his friend Rod, who was visiting from Illinois. We had no problem finding a two person limit on this morning, but by the end of the trip the water started to change for the worse. I'm not so sure we would have been able to find enough fish for a full boat of anglers. 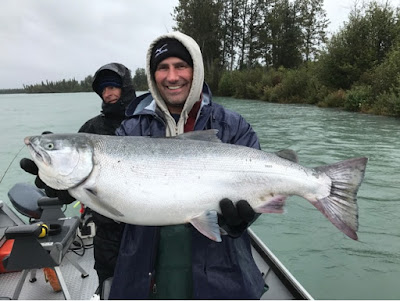 On Wednesday, it was good to be back on the water with Jason, Bill, and their friends Brian, and Bob. It was a great morning for getting caught up, but with rising water the fishing was awful. By 10:30am I made the call to end the trip until the afternoon tide came in. For the first couple of hours of our second trip of the day, we didn't have a bite. I was starting to think this would be the first shut out of the silver season. It was desperate times and when Jason requested the lure that he last used in 2010, our luck changed. His first fish was about 10lbs. Not long after, he hooked into this beautiful 16lber 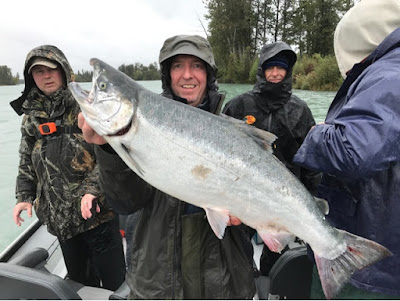 Then it was Brian's turn to catch the twin to Jason's fish. 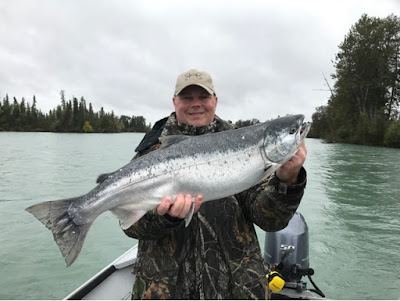 Bill followed with this nice 14lber. 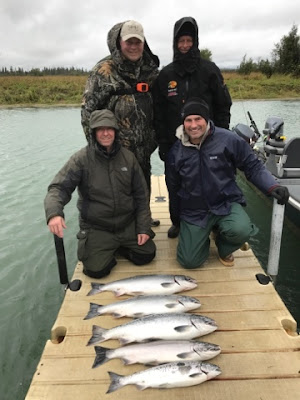 Bob ended up catching the last one for the day. So, what started out as a day with nothing in the box, ended up with everyone catching at least one salmon. 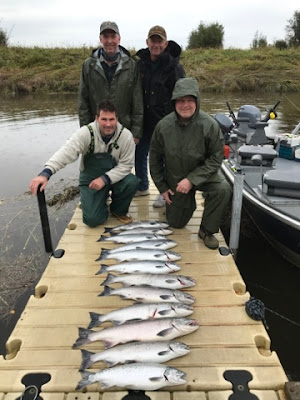 Day two was a reward for these guys putting in a long, wet day the day before. As you can see, we had our dozen and we were back at the dock by noon. 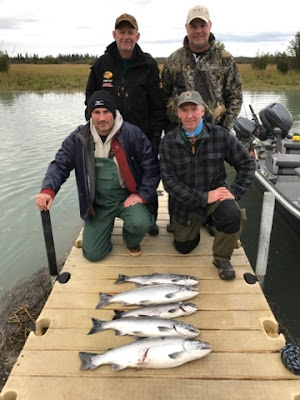 Day three was a lot like day one, except for less rain. We definitely had to put our time in to find a few willing biters. Jason, Bill, Brian, and Bob, I really appreciate the time we spent on the water. Great conversation, some moments of great fishing (and not so great weather), made for an enjoyable time for me. Hope it's not another seven years until you guys come back... 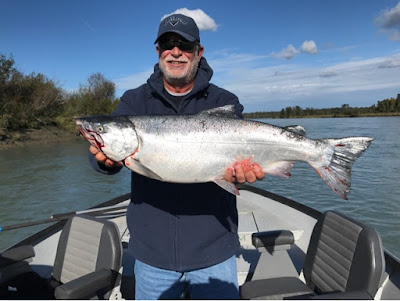 I didn't have a scheduled trip on Friday, but with the water still being off, I was more than okay with that. I did speak to my neighbor Dan and asked him when Rod was flying back home. He said he was leaving on Saturday. Well, I told him I needed to work on my fishing gear and there's no better way of doing that then sitting on anchor with a couple of kwikfish swimming behind the boat. Did they want to come along? You betcha. In relatively poor fishing conditions this beautiful 12lb silver found Rod's lure. It was nice to send Rod home with another memory of the Kenai. 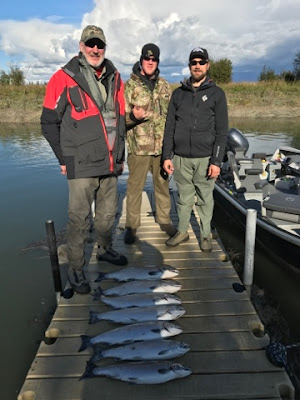 The water quality improved by Saturday morning and the  river was back on track. Well, at least I thought it was. By 8:30am we had four fish in the box. We fished another seven hours to get three more to bite. Walt, Jeff, and Daniel are all veteran Kenai River fisherman. They know how special this river can be and it was great to swap stories about epic, and not so epic, days on the water. Whether you're in my boat, or your own, I know I'll see you guys again. Thanks for the day.

What do I think the week ahead will look like? I think we'll be able to find fish, but I'm not sure how many. I do know the second run peak is coming soon and it's just a matter of time until it's here.

Come back next week to see how we're doing.

p.s. My thoughts and prayers go out to my Texas and Florida friends. It's a very difficult time for you all. 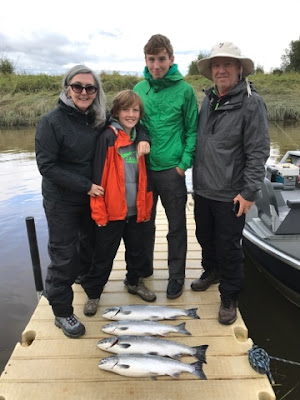 It was a quiet week of guiding, but it was another great week of fishing. Well, that's mostly true except for a couple of days that the river became muddy. When the river starts to look like coffee with creamer, the bite usually shuts down. I was very fortunate not to have any trips scheduled on those days.

My week began when my friend Matt brought his visiting family down for a fishing trip. Since they arrived at the cabins early in the afternoon, I told Matt we should go out and whet their appetites before our scheduled trip the next day. Here's Sally, Cole, Travis, and John after a few hours of fishing. Not a bad introduction to the Kenai River and silver salmon fishing. 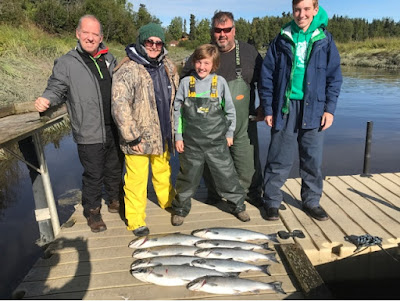 The next day we went out and had a great morning of fishing. The highlight of the trip was two double doubles. What this means is we caught two silvers at the same time twice. That's Matt in the middle of this photo. I'm sure glad he was on board to help me with the chaos. 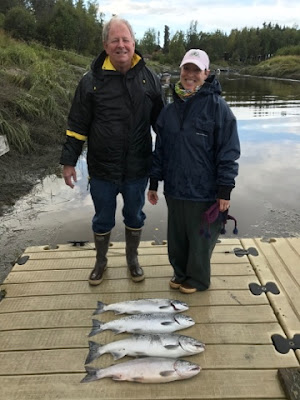 The next day I didn't have a trip so it was time to take Jane and Dan out. 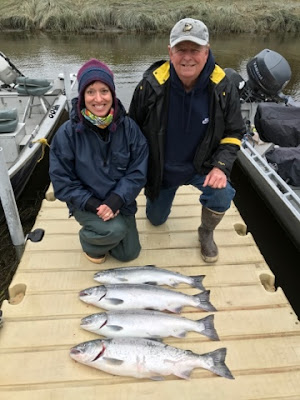 And the next day we did it all over again. 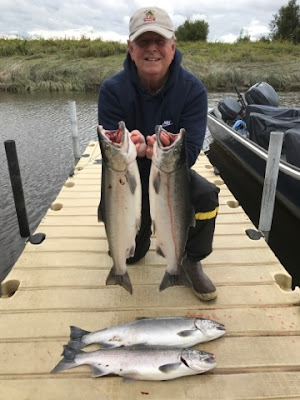 Jane couldn't make it the third day so it was just Dan and me. Another day, same results. 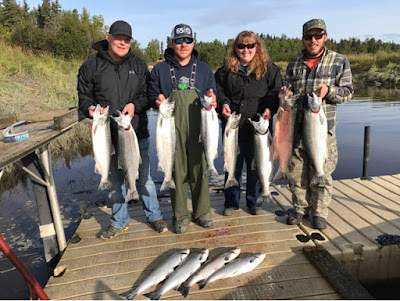 I finished the week fishing Team Alpha Roofing & Construction from Wasilla, Alaska. If you notice in the photo, the limit for silver salmon has increased from two to three fish. This regulation went into effect September 1st. Thanks, Tyler, Travis, Crystal, and Justin for a fun morning. And, thanks Bryce for once again sending your employees down for a night in the cabins and a day on the water.

My little respite from guiding ended today and for the next six days I will be fishing. I have a lot of repeat customers, so I'm definitely hoping that the excellent fishing will continue. Come back next week to see if it has. Later!

Posted by Beaver Creek Cabins & Guide Service at 2:00 AM No comments: