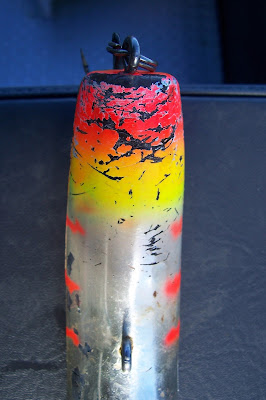 Continuing the theme of the previous post, I thought I'd share the particulars of a conversation I had about Kwikfish lures with a well respected Kenai River guide. One spring day we were both taking a break at a boat launch restroom and I told him that through the years I've noticed he's very effective as a guide and that he only fishes Kwikfish lures and never salmon eggs. I asked him about the key to his success and he was quick to tell me he'll purchase 100 lures to find 10 "swimmers". Wow. That's a heck of a commitment. It seems excessive, but it's really hard to argue what he's been able to do (I personally like to mix up salmon eggs and Kwikfish lures and let the fish tell me what they want). 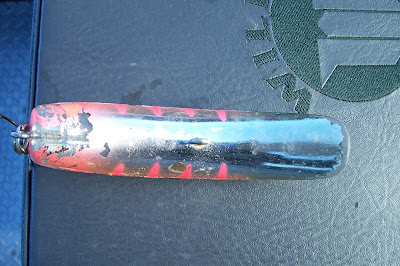 So why do salmon like this lure so much?

I've boiled it down to four factors. I'll list them from the most important reason to the least important.

1A) The action of the lure. This means properly tuned.
1B) The placement of the lure (the seam the fish are traveling).
2) The scent on the lure.
3) The color of the lure. 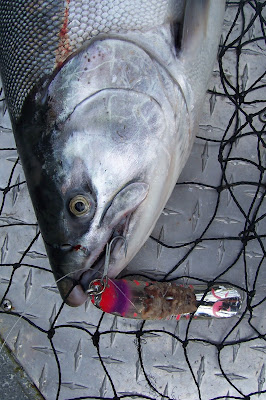 When all these factors come together.....Paydirt! 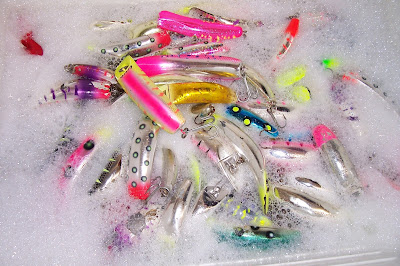 In the winter, I spend time (too much sometimes) cleaning and maintaining my fishing gear for the up coming season. I'm a little obsessive about this. The underlying factor for my all consuming attention to detail is rooted in the core belief that I can't control what the fish will do, but I can control my equipment. If my gear fails, then I've failed you as a guide. I am not a fan of failure.

So, as I'm soaking and scrubbing off the sticky, sardine residue off of lures, I sort out the "swimmers" from the "non swimmers".

Huh? What the heck does that mean?

Well, within the fishing community that I belong to, a "swimmer" is a lure that catches fish. A "non swimmer" does not. It's pretty easy to tell the difference. 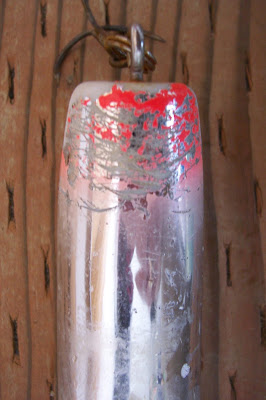 Here's a "swimmer."  Notice all the scratch marks on the tail end. This is from the teeth of countless salmon that couldn't resist the action of the lure. 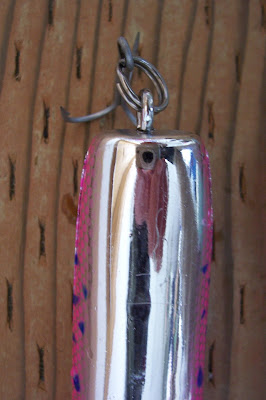 Definitely a "non swimmer." This lure was fished on multiple trips and it looks like it's brand new. Since I don't want this lure in my 2018 line up, it was separated from the "swimmers" and put in box of gear which will be sold at a garage sale to be held at a later date (some day, Jane, I promise). Here's a bit of advice for you, reader of the blog: don't be tempted to buy slightly used fishing lures at a garage sale or Ebay. Most likely it's someone trying to get rid of unproductive lures. Just sayin', wink, wink.... 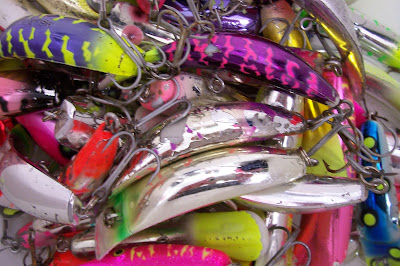 A final bit of advice I'll leave with you about lures. If you're on a guided fishing trip and you get to choose, always grab the lure that has the most teeth marks and the most paint missing. Not to say a lure that is being fished for the first time won't be effective, but why not start with one that has a proven track record. A well loved lure is hard to beat

About a fifteen minute drive from Beaver Creek lies Elephant Lake. If you want to know how the name was chosen, it's pretty easy to figure this out when you look at the outline of the lake on a map. If Rorshach tests aren't your thing, I'll give you a hint: the elephant trunk is the south end of the lake.

This beautiful, little lake is 340 acres and is stocked by ADFG with rainbow trout, arctic char, coho (kokanee), and steelhead. I've fished this lake in the summer many times, but I've never ice fished there. That changed last week. 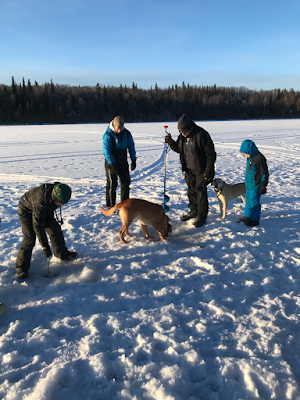 My original plan was to fish it alone, but after talking with a couple of buddies of mine, we put together a nice little crew. With kids, dogs, and snowmobiles in tow, this would be a great day, fish or no fish. 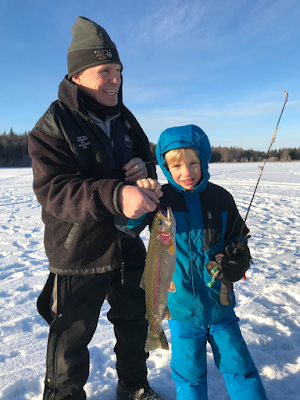 How was it? Well, we did catch and release a couple of fish. Here's Boo with his son Oliver and a nice Elephant Lake rainbow trout. An 18" arctic char was also caught, but it was released before I could capture the moment on my iPhone.

Was I disappointed with the fishing? No, not at all. It's been better for me by boat, but getting outside with friends made it a worthwhile day. 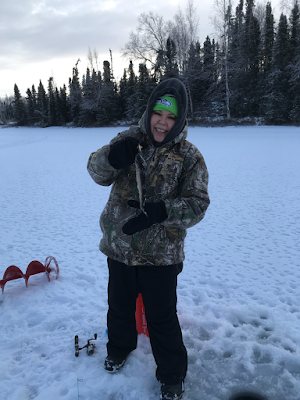 Elephant Lake wasn't the only place I ice fished last week. I decided to go to an old favorite, Sport Lake. I met up with my neighbors, Rusty, Evelyn, and everyone's favorite beagle, Lilly, and it was an afternoon of non stop rainbow trout/kokanee action. As Evelyn says, "I like to catch, not fish" and Sport Lake is perfect for that. 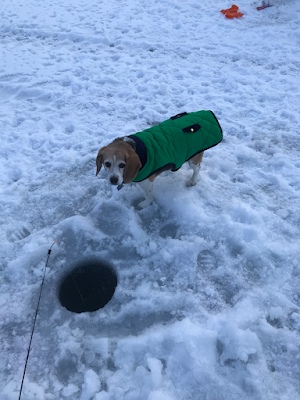 Here's Lilly letting me know that there's fish down this hole. 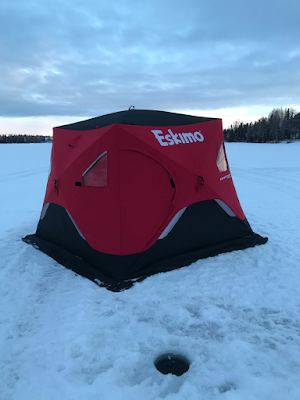 The portable ice fishing house was set up on this day just in case it got too cold. With temperatures in the mid 20's, it was barely used. 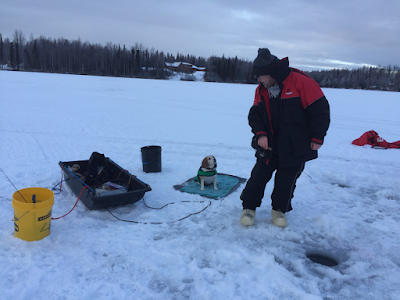 My guide/coach Lilly letting me know I was jigging all wrong....

All in all, in a couple of hours we probably released 60 rainbow trout and kokanee. Nothing larger than 12", but still, not a bad way to spend a winter day.

Posted by Beaver Creek Cabins & Guide Service at 8:39 AM 2 comments:

I was excited this past week when the local news report said that on January 31st, Alaska would be one of the best places to see the lunar event known as the Super Blue Blood Moon. This happens when the moon is at it's closest point to earth (super moon), along with two full moons in the same month (blue moon), which is then coupled with a lunar eclipse (blood moon). The reason why Alaska is one of the better viewing areas, is because we are dark during the whole event. My favorite local television meteorologist, Jackie Purcell, said to be awake from 2:30am until 6:00am to see the entire eclipse. The best viewing would be at 4:30am. Her forecast called for clear skies throughout South Central Alaska. Right then and there I decided that would be the time I would get up.

I was eager to see this. Last fall I felt like I was robbed when most of the lower 48 got to see an incredible solar eclipse. This Super Blue Blood Moon would be the event I could tell all my friends I got to see and it would be awesome. And, if they didn't believe me I could show them all the cool photos I took on my iPhone.

The alarm went off and I immediately went to the windows on the west side of the house with iPhone in hand. I could see moon shadows and the outline of trees in our backyard. Oh yeah! I looked straight west. No moon. I looked overhead for stars. No stars. Crap. Clouds. Robbed again. So much for the clear sky forecast for Kenai, Jackie. Thanks for nothing.

Sure, I was disappointed but there is a bright side to this. The previous Super Blue Blood Moon occurred 152 years ago. Thankfully, I only have to wait 10 years before I'll have the chance to see the next one.

Okay Copernicus, this little story is all fine and dandy, but are you going to write about fishing anymore?

Yes. I promise next week I will. In fact, it will be about ice fishing at a local lake.