It's Memorial Day weekend, and we honor those who served and died in service to our country. Take a moment while grilling to think about the sacrifices that many made so we can enjoy our freedoms.....

Our first guests of the year arrived in the cabins and Jane had everything in tip top shape. The spring cleanup is definitely worth it when a note like this is left behind. 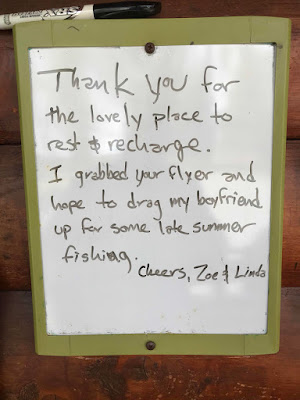 Even though I've been busy this week with quite a few maintenance issues, I did find time to get out on the river on three different occasions. 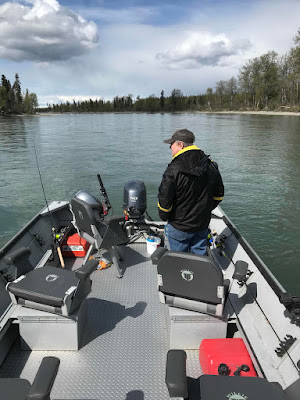 Wish I had a great report but the catching has been a bit slow. I've heard of a few fish being caught, but the closest I've come to taking a picture was a jack king salmon that Dan Meyer LDRed (long distance released). For those not familiar with this term, it means we didn't land it.

I think there are a couple of reasons why the fishing has been slow: debris in the water, and low fish counts. The sonar counter went in on May 16th, and the total number of king salmon greater than 34" that have been registered is 186. I really hope our cool spring has kept the salmon from coming into the river and not the alternative, which is a weak run. Only time will tell what it will be. 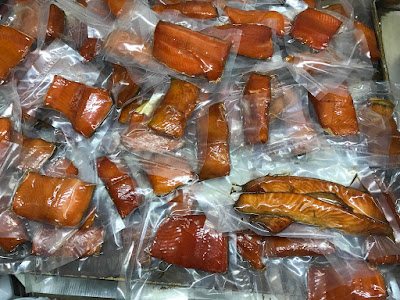 In the meantime, if I'm not catching salmon I might as well be smoking what is left from 2017. After 24 hours of prep and smoking time, this is the fruits of my labor. 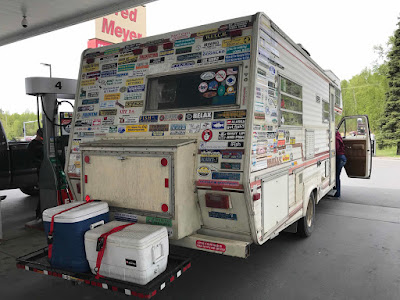 Thought I'd share this last photo with you. Memorial Weekend is the unofficial start to the summer tourist season. The Fred Meyer gas station is a great place to witness this transformation

Come back next week for my first official fishing report of 2018. It's official because my first guided trips will be happening this week. Fingers crossed for cleaner water, and more salmon.... 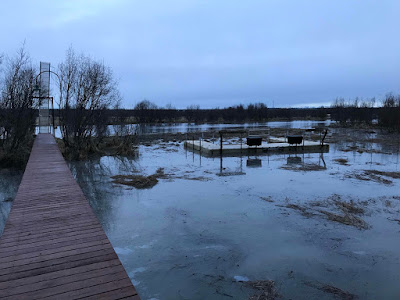 On May 16th we had a 23 foot high tide. Normally, that's enough water to float the dock out and attach it to the the walkway/gangplank. This year was not normal. At 5am Jane and I were confronted with what you see in the photo above: not all of the land was underwater. It was obvious it would take more than the two of us to somehow get the dock over the ridge and into place for the season. We had one shot to do this the following morning or it couldn't be done until the next high, high tide on June 15th. Not a good thing when our business motto is "Out of Bed and Into The Boat". This snafu, if not rectified, would force me to travel to a boat launch every day with my customers. 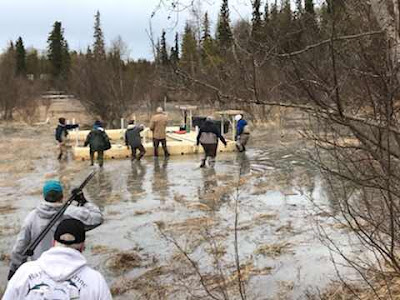 I'm simultaneously blessed and cursed with Scandanavian self sufficiency (stubbornness) and it's not always easy to ask for help. In this case, I had no choice. I called and texted some friends and asked if they could bring their waders and meet Jane and I at the dock at 6am. Every single person I contacted came. I am floored by the turnout. If that's not the definition of true and genuine friendship, I don't what is. 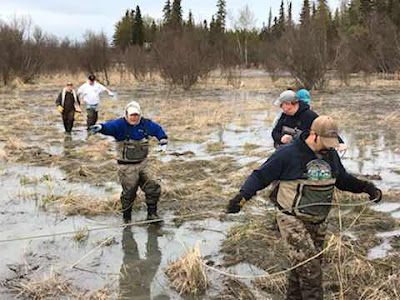 It was kind of like an old fashioned barn raising when the community comes together to lend a hand. Sure, there were more people than needed, but I didn't know what challenges we would face if we had trouble. The bench was deep I was grateful for the support. 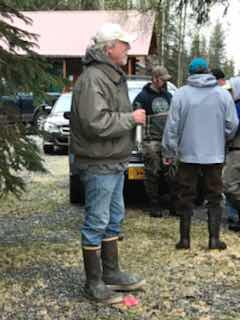 I don't always list first and last names in my posts but the guys who came deserve recognition for what they did for us. A huge thanks goes to Jeff King, Greg Davis, Will Jahrig, Dan Meyer, Boo Kandas, Ron Rogalsky, Ken Gates, Brad Adams, Charlie Bogard, Mike Wheat, and Rusty Huf. Some of you guys took time off of work to help, and some of you came before you went to work. All of you are stand up guys, and I hope one day I'm able to repay the favor. 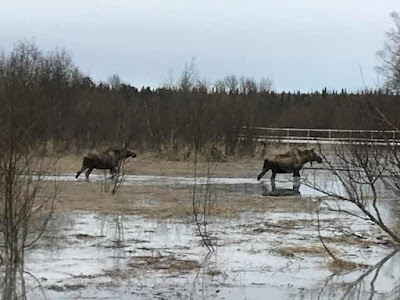 It was only fitting that after we finished the dock we were sitting around eating Moose is Loose donuts, drinking coffee, and these two decided to swim across the creek and walk through the yard.

Random thoughts, not about docks, from this past week:

Posted by Beaver Creek Cabins & Guide Service at 9:10 AM 2 comments: 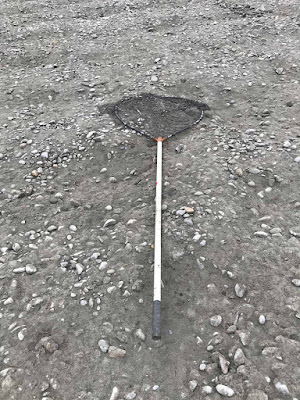 The early bird gets the worm. And, the second mouse gets the cheese. I got 'em both this year.

For new readers to the blog, this probably doesn't make much sense. For long time readers, you know exactly what I'm talking about. For the uninitiated, not long after the ice goes out I'll take my cataraft and float the river in search of treasures lost. Those are my words. My spouse calls it junk. Anyway, the 2018 Salvage Run was good for both.

The photo above is the very first item I found. It's a genuine Beckman King Salmon landing net. A brand new one will retail around $200. 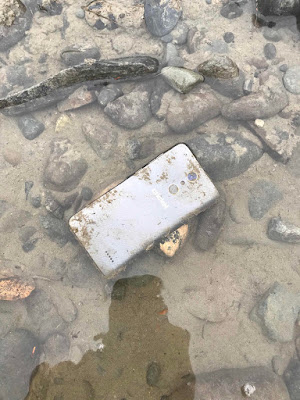 How about this discovery? It's the first phone that I've found. I feel very comfortable stating that hundreds of phones have been lost in this river. And, yes, that number includes the one I lost over ten years ago. Boy, I sure do miss that flip phone... 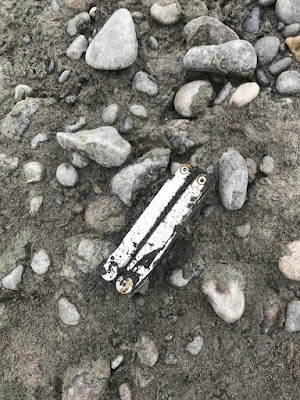 A perfectly good Leatherman Wave multi tool. By far the best tool that I've ever found. 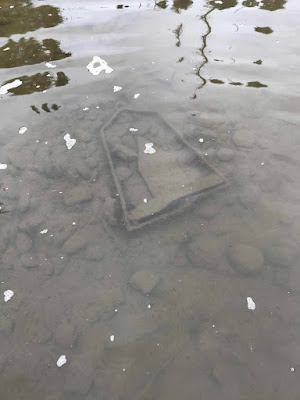 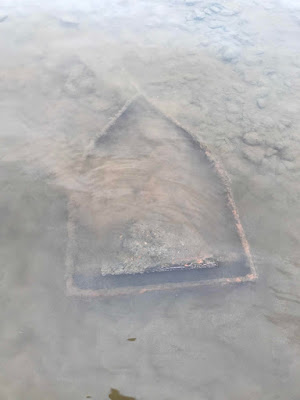 Not sure what to call it when you find the Holy Grail twice, but this put me one away from my record of finding three anchors on a single run. The interesting thing about the two anchors is neither one had a chain attached to it. Nor did they have a frayed, broken rope hitched to the front eye. Once again, my conclusion is I'm the benefactor of a couple of people not knowing how to tie a knot to an anchor. 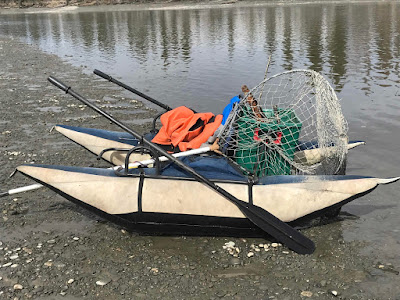 A final photo before ending the trip. Hard to see all the treasures stored aboard, but I did find a dozen or so fishing lures and a nice Ugly Stik fishing rod. Overall, it was the least amount of fishing lures that I've found, but I'm not complaining. I clearly made up for it with other gear.

On my float, I did see one boat fishing. I asked if they had any luck and their response was a resounding "no". It still might be a bit early to actually catch a king salmon, but I won't know for sure unless I actually go do it. That is my plan this week, try to find a window and then go do it. Make sure to come back next week to see if I'll have my first official fishing report.


Addendum to the post: a reliable source told me at least one king was caught this past week. And so it begins... 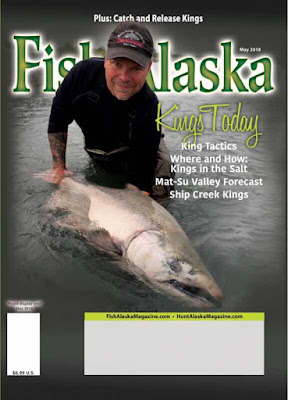 This is just cruel.

It's early May, freshwater king fishing is just around the corner, and my friend Francis Estalilla sends me a copy of the latest issue of Fish Alaska magazine. On the cover is a photo that Francis had taken of his friend Shawn releasing a bruiser of a Kenai king. I'm trying to be patient about the upcoming fishing season, but photos like this are killing me. Soon, very soon. Repeat. Soon, very soon. Breath through the nose. Soon, very soon...

This is not Francis' first photo to grace the cover of a fishing magazine, nor will this be his last. I guess when his chosen profession is being an eye surgeon it would only seem natural he would have a keen eye for capturing the perfect fish photo. Truly a man of many talents. 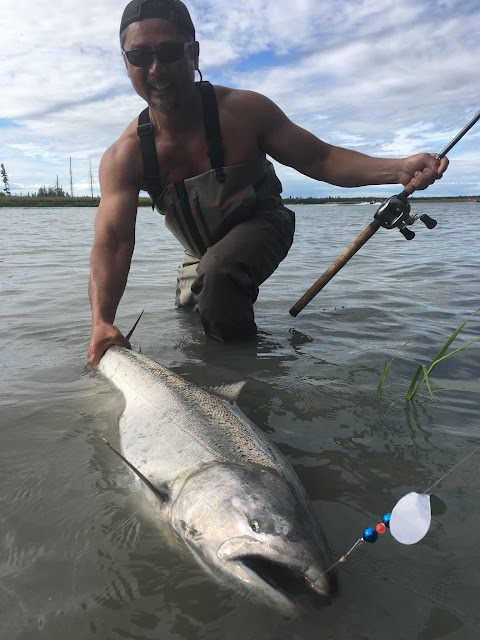 Here's Francis doing what he's famous for in these parts: catching Kenai kings, and then releasing them. If you wonder why I'm such a fan of his photos it's because of the regulation on the Kenai River that prohibits the removal from the water a salmon that is going to be released. Most photos are alongside the boat, which usually leads to a bad camera angle and not really getting a sense of the size of the fish. Francis, as you can see, wears his waders and swims with the fishes for a quick pose/photo before releasing. 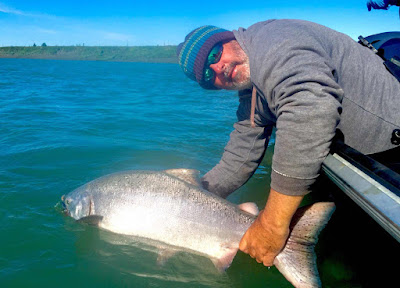 This is one of my better photos of a king release alongside the boat. It's good, but it doesn't compare to what Francis is able to do.

One way or another I'll be on the river this week. Salvage run, or perhaps fishing, it's time to get familiar with the water again. Maybe this will be the year I'll beat my record for the earliest king. For those keeping score, that date is May 11th.

Posted by Beaver Creek Cabins & Guide Service at 6:52 AM No comments: