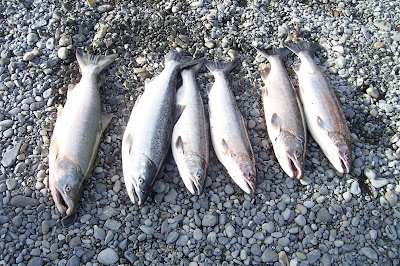 So I get a text Tuesday morning from Brad Adams. He asked if I wanted to go fishing in the afternoon. I texted him back and said, "how about now?"  It was game on. 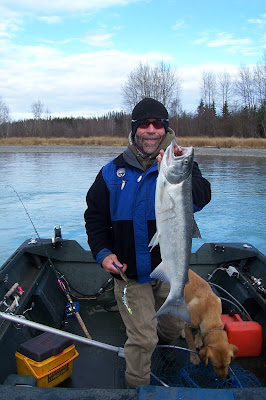 The old fisherman's proverb of "you never leave fish to find fish" held true on this day.  We went right back to where we were fishing last week and in just over an hour we caught our six fish limit. How good was the bite you ask?  Well, the fish above Brad caught on his first cast.  I wasn't as fortunate.  It took me about ten casts before I caught my first silver. 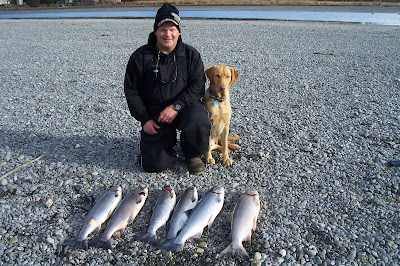 Here's my buddy, Buddy happily posing with our catch of the day. Buddy is Brad's 11 month old yellow lab. It's a terrific dog in the boat and I'm beginning to rethink whether I should have a Buddy as well.....

I think this trip was it for the year, but I haven't officially closed out the 2015 fishing season just yet. Come back next week to see for sure. 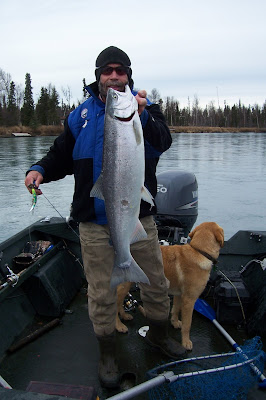 It ain't over until it's over.  For this past week, it definitely wasn't over.

I got a text Thursday morning from my friend Brad Adams asking if I wanted to go fish the middle Kenai river with him. Brad is a former Kenai guide extraordinaire who left the river for a career as a bush pilot.  Because of that he doesn't get to fish like he use to.  He told me his goal was to get a few silvers for the freezer and I said I would be happy to help him. 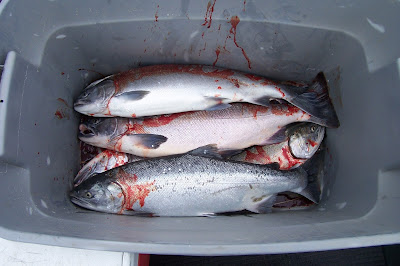 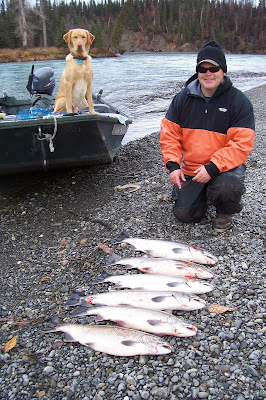 Friday morning I get another text from Brad asking if I wanted to go fishing again.  Now he said he'd like to get a few silvers for the smoker.  In an hour we landed these six silvers.  Thanks Brad, glad I could help you sock away a few fish for the winter. 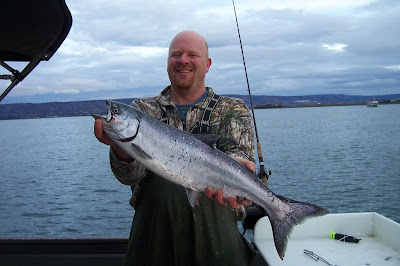 While I was fishing with Brad on Friday, I got a text message from my old pal Jeff Raisanen.  He keeps a boat in Homer and wanted to king fish on Saturday.  His problem was he was coming with his 2 year old son, Ross, and he needed another adult on board.  Why not?   Within the first ten minutes of trolling around the Homer Spit, Jeff lands this nice feeder king. 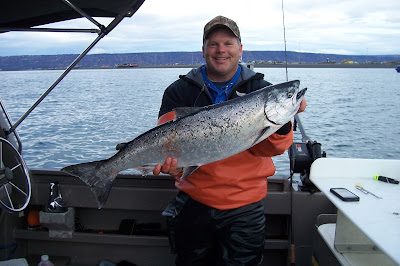 About ten minutes after our first fish this 28lb king slammed the lure.  It was by far the largest feeder king that either Jeff or I have ever seen. 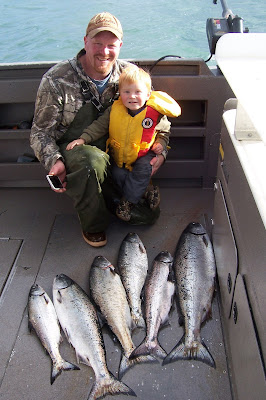 It was a great day and the bite was continuous.  A 2 fish limit for everyone! 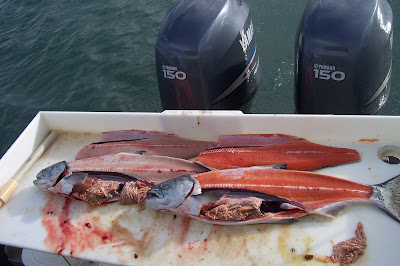 The icing on the cake was that one of the kings was a white king. From the reports I've been hearing, there's been more and more white kings showing up in Kachemak Bay this year.  Many people think they're a delicacy, while others say they're no different than a "normal" king. The way I see it, it's a win/win situation no matter what.

For the week ahead, unless I get a bunch of texts from guys who haven't winterized their boats, I suspect the only fishing I may do is from the bank of a river.  Kenai, Kasilof, Anchor?   There are definitely choices available. 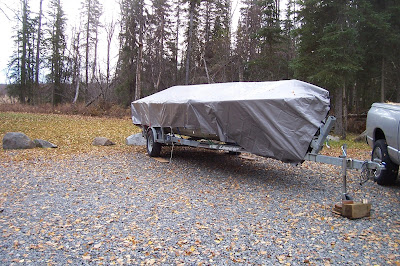 I didn't get out fishing this past week.  I winterized the last cabin and I decided to winterize both boats as well. From here on out the only fishing I'll be doing is from the bank.  Hmmm, I've heard a few good reports about steelhead on the Anchor River...... 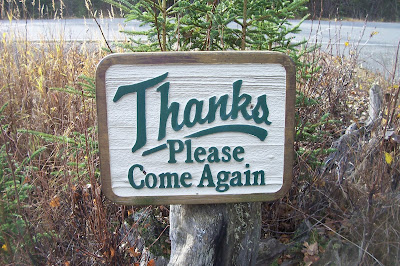 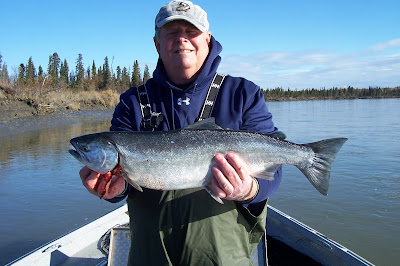 "He's baaack!"  And, my second line is "they're still heeere!"  And what I mean by "they" are silver salmon.

Had a hunch that Dan Meyer would make it back to Alaska for a third time this year.  My only doubt was whether Mary would make it as well.  She couldn't so Dan either fished with me or he fished on his own this week. It didn't matter where he was at: he caught fish every day.

The first day we went out on the lower river the water was rising.  It still had reasonable "Kenai" color so the fishing wasn't too bad.  Three fish came to the boat. 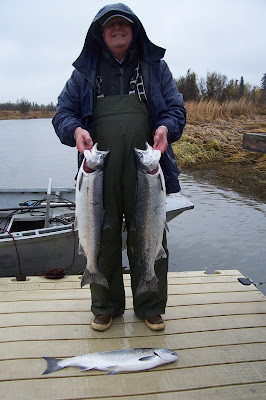 The second day the water was muddy and the bite shut down.  We managed to get one silver in a few hours on the water. 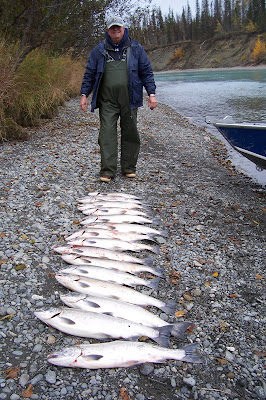 When the Kenai River muddies up, the majority of the mud comes from the Killey River.  I talked to my friend Boo, who was fishing the Kenai above the Killey this week, and he said the water was great and the silver fishing was excellent.   He said he had room the next day and invited us to come along.  I'm glad we did. The five of us, which included Boo, Brad, and Darryl, got our limit of fresh silver salmon.  Pure alchemy. 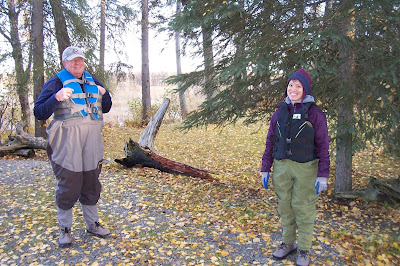 It wasn't all about fishing this past week. The ceremonial ending of my guiding season took place Wednesday night when we took the dock out.  Here's my capable helpers, Dan and Jane, suited up and waiting for the tide to rise. 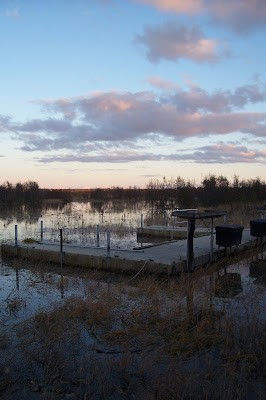 It's always sad when the dock is sitting on the grass for the winter. Oh well, I have to remind myself that May is only seven short months away.

The week ahead I'll be winterizing the last cabin.  I will also winterize one of my boats.  I can't quite put away both of them because the fishing is still pretty good and I'd like to get out at least one more time. Make sure to come back to the blog next week to see if I've used my boat again.